Civil Transportation for an Uncivil World

Your typical apocalyptic wasteland is never complete without a way to get around that requires the consumption of precious and rare resources which might well have precipitated the trouble in the first place. To that end I bring you vehicles of the unarmed sort. Our first example, El Burro Grande (which I can't help but call the burrito grande) is a small utility truck of uncertain ancestry. (Which is to say it was certainly not made by Imperial Motors.) The suspension is whacked all to heck. It's welded, bolted, riveted, and generally taped together from the pieces of a dozen donor vehicles. It's bullet scarred and battle bruised, but it runs when you can find fuel. And it's available for rent on a daily or even weekly basis (for those bigger jobs), and the owners don't tend to ask too many questions about new holes and burn marks that don't interfere with the machinery. This bright orange donkey of a cart may not win at the Derby, but he'll get you there. If you want fast, go get a red one. Logansport spacers are more concerned with payload and price. 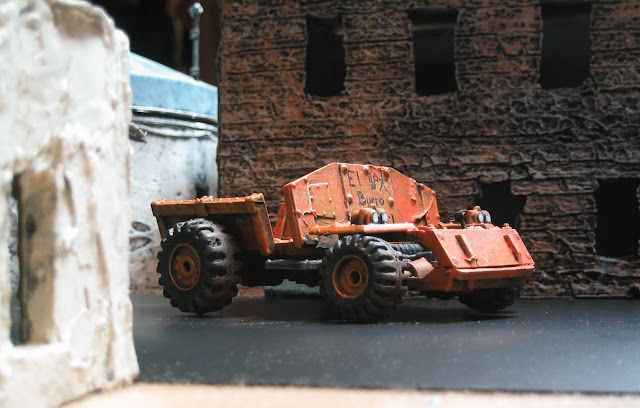 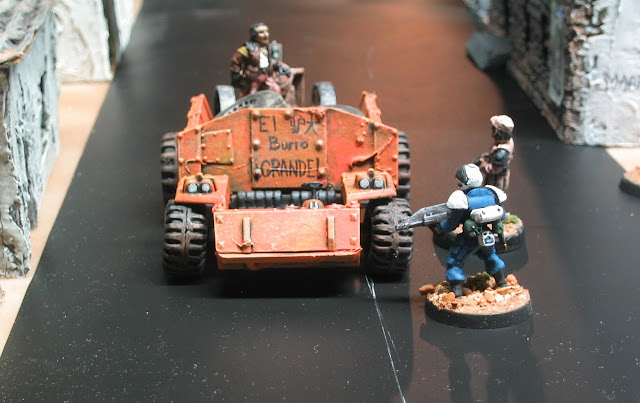 Simple and reliable older vehicles are also quite popular, though they tend to be examples too heavily modified for the collector's market in the core worlds. The "Bummer" is one such. In this case passenger seating was sacrificed for cargo capacity. The weld jobs won't win any beauty contests, but they don't seem too likely to fall off in the wastes, which is something of a bonus. And it has enough ground clearance to get you through some of the sketchier boulder fields: a nice plus. 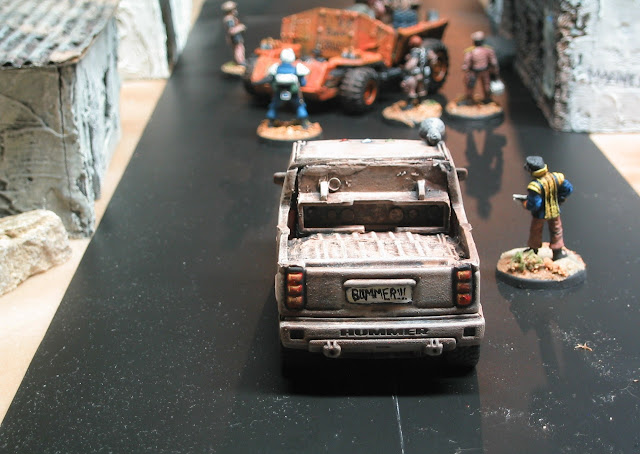 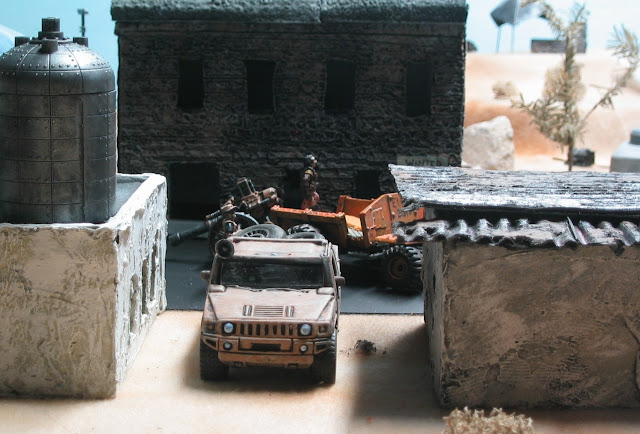 For those not familiar, the first truck is a more or less unmodified Gorka Morka "ork truk" acquired used on the bay. It was in rather brutal shape, missing parts, seemingly painted with housepaint, and held together (where applicable) with hot glue, but that just gives it more character to fit the scene. The second was an inexpensive die-cast Hummer given to me by a friend and quickly sent off to the chop shop for appropriate modifications and new paint. The scale is one of those arbitrary "box" scales you sometimes see where all models are about the same size, no matter how big the original was, but I figure there's a good deal of room for play. The landspeeder crew models I sometimes use to size these things fit, so it's all good.

There are several box scale die-cast jobs in the same odd-lot gift, so expect more vehicles to slowly pop up. Why there are so many vintage cars on this remote dust-bowl moon I'm not quite sure yet. Maybe there was a collector. Or maybe a couple of the designs just had legs and kept getting dredged back up for millennia. It's a strange and dark age and decent explanations are sometimes dearly bought, if you can get them at any price.

But anyway . . . as always thank you for reading. And stay tuned.