Transport is always a challenge on the many near roadless mining planets and agricultural moons of the Tartarus Rim. Improvised vehicles, salvaged from the wreckage of mishap and malice, are incredibly common. The Half Jimmy might once have been a class of commercial vehicles, but its origins have become gray with time and distance. Its utility, however, is beyond question. Driving wheels make operation simple and intuitive to anyone familiar with ordinary wheeled cars, but substantial tracks taking the heavier loads give it an ability to navigate all but the most utterly impassable of trails. It isn't fast, but it will get you there. 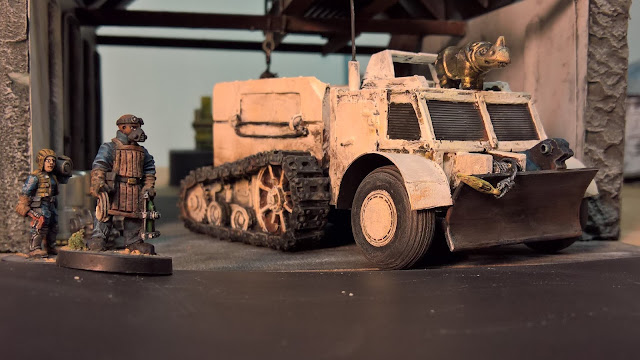 Better still, it will help you take friends. Or equipment. Or supplies. It's a fairly versatile little vehicle. Particularly useful are some aftermarket additions: a large winch and a solid communications suite. 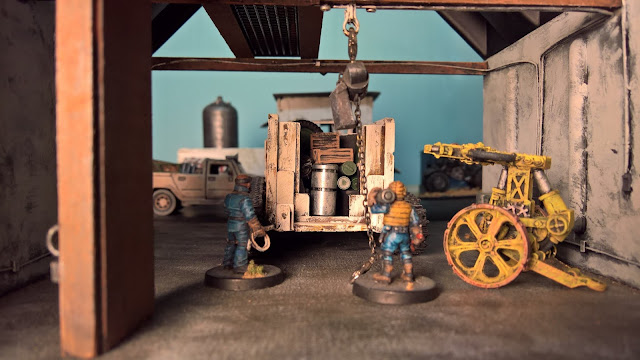 So where did this attractive model come from, I hear you ask? The answer requires a little telling, but it's not too complex in the end. Most of it came from the fine Curtis Fell of Ramshackle Games. Better yet, it came free! No, he isn't really in the business of giving away toys. (And if you like the fact that there are new characterful models out there I highly recommend paying him.) But castings don't always come out just so. Sometimes . . . molds break. Or resin acts up. Or probably a dozen other things I as a mere painter and putty pusher don't fully comprehend. And if you're in his vicinity he's more than happy to give you his rejects. (Rumor has it he might even include some with an order if you ask. Kind of the prize in the crackerjack box.)

Me? I never met a truck so battered I didn't think it'd look absolutely spiff! Spiff I say! . . . On some dusty forgotten gaming table. (With suitable paint and some added jewelry, that is.) When I was in the UK last summer Curtis gave me just such a bunch of misfit toys. (Expect more to arrive in the story later.) I had a cab, a bed, and a couple of tracks. So I needed wheels and . . . stuff. So on to the jewelry! 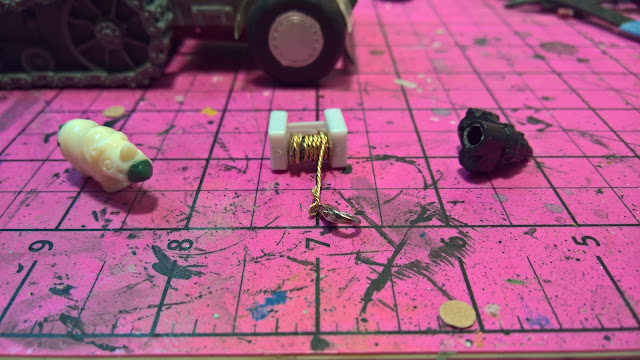 Mr. Cerous Rhino was a bead I got from a friend. As such, he had holes where his mouth and a$$#0! should have been. (This kind of seems appropriate, but . . . they were a little large and round.) A bit of greenstuff carefully shoved where the sun wasn't shining just then solved the . . . um . . . problem. The next thing required was wheels. These came donated from a badly worn Monogram B-24. Fenders were compliments of the end of a half used tube of epoxy. The plow was a bomb bay door off the bomber. Mixed in were jewlery parts, a cover from an electrical connector, a cell-phone antenna, and some general bits box mysteries from long forgotten trucks and motorcycles. You know. The usual suspects. 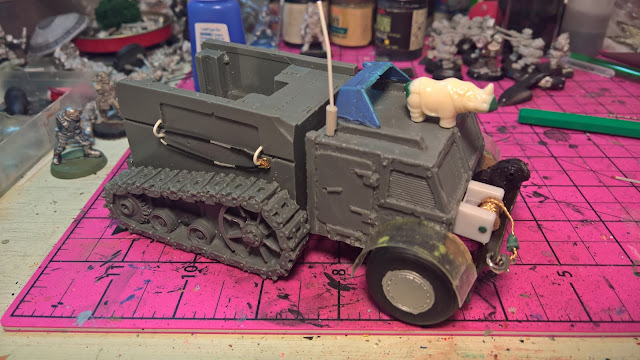 Slap some paint on it and it doesn't look half bad if I do say so myself! 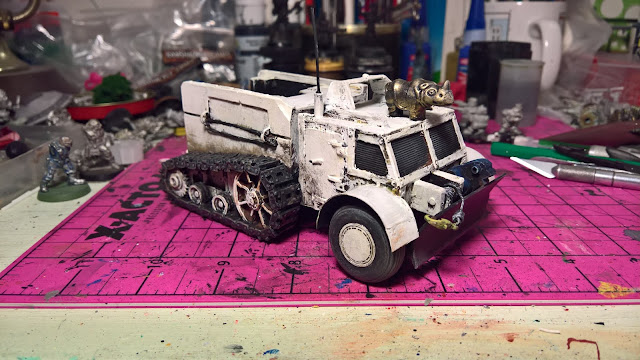 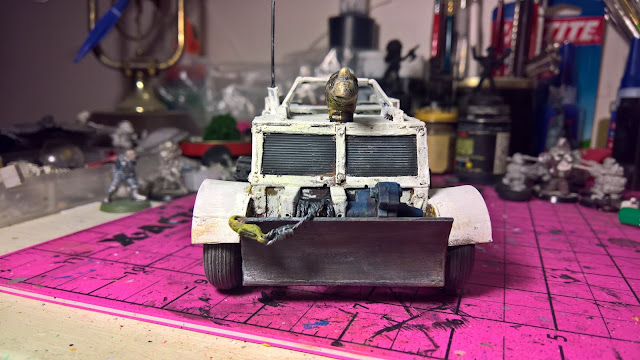 This isn't absolutely the deepest dive into bashing up a truck, but hopefully you get at least a taste of how I dream this stuff into existence. In any case, thanks for joining me on the ride!

Sincerely,
The Composer
Posted by The Composer at 2:24 AM 8 comments:

Not only is it that time of year . . . it is past that time of year. Even if you count the East Asian Lunar New Year. Which is a part of my excuse for why I'm running so dang late: I was in Vietnam for Tet with my wife and her family. Long story. Lovely trip. Lots of food and pictures. No models. 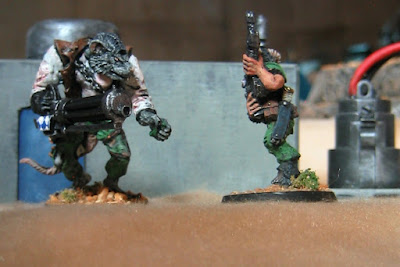 The year got off to a pretty solid start, actually. The first project of 2019 was this big pig: The Rainbow Connection. Absolutely one of my proudest models of recent memory. And one on the to-do list for an awfully long time. Scratch one off for the record books! 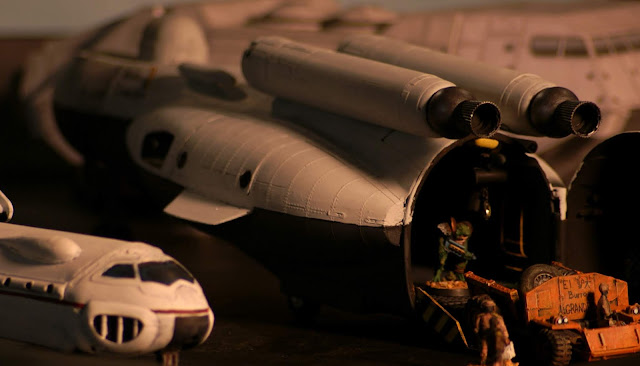 No. 2 was a paper shuttle. Interesting experiment. More durable than it looks. Not bad, really. 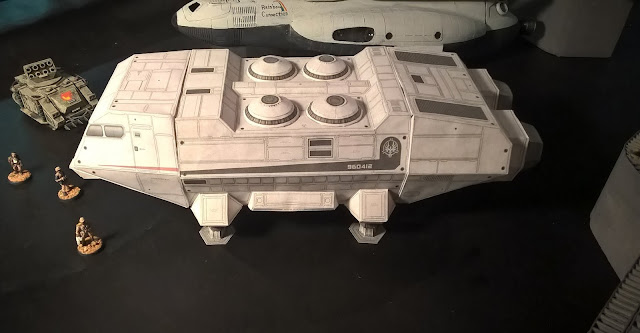 No. 3 was this fine avian looking fellow below. Rather villainous, if I do say so. The mayor of villainy! 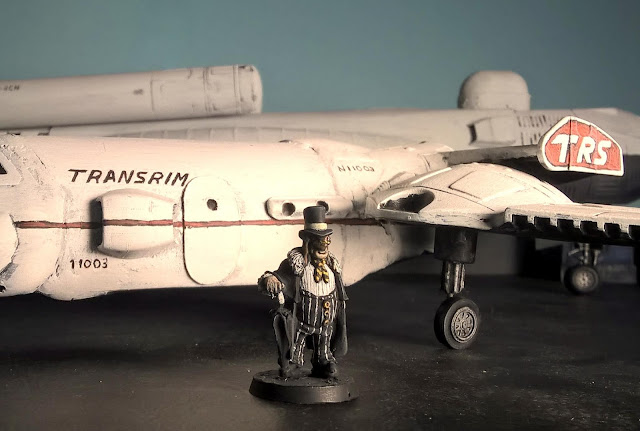 No. 4 was this oddball steam walker I added to the Delightful Dreadlies. 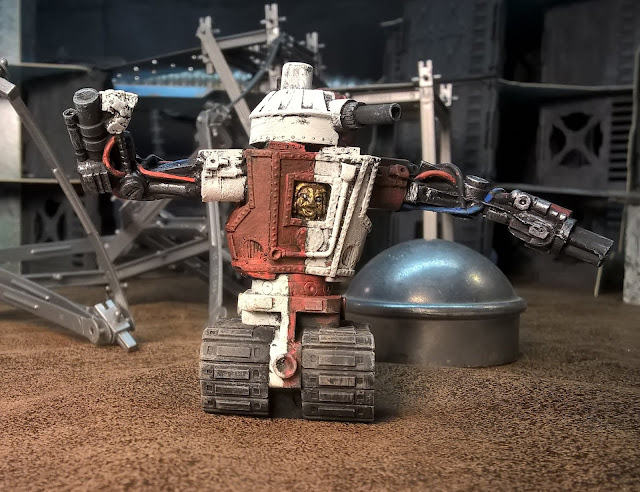 No. 5 was a Jess Goodwin genstealer hybrid. 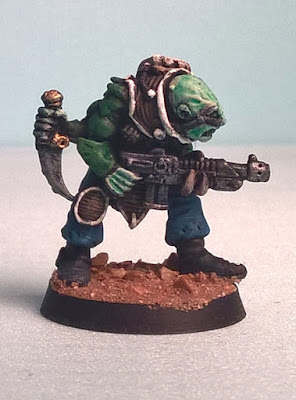 No. 6 was a big fuel truck only an ogre can love. 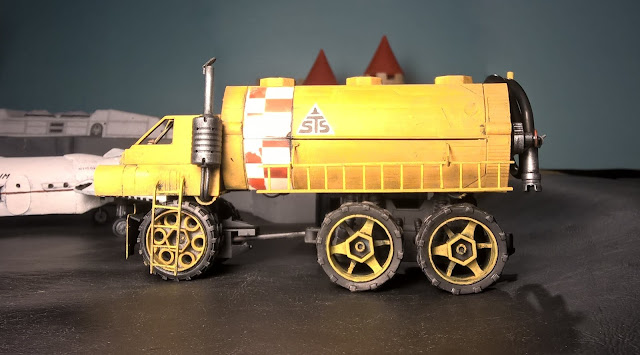 7 and 8 were two gobbos: one from Karkeel and the second from Demonblade. 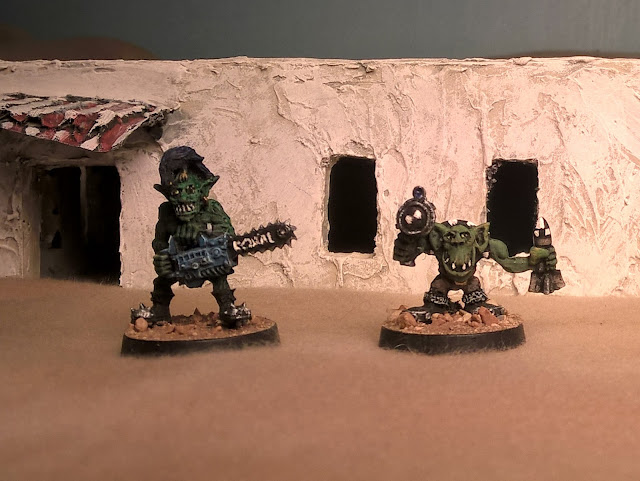 No. 9 was a landspeeder with a sinister smile: a landshark, if you will. 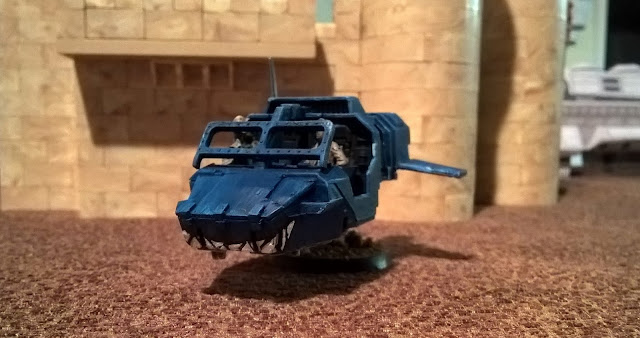 No. 10 was a stinking grox angry at those who would hope to burgherize him. 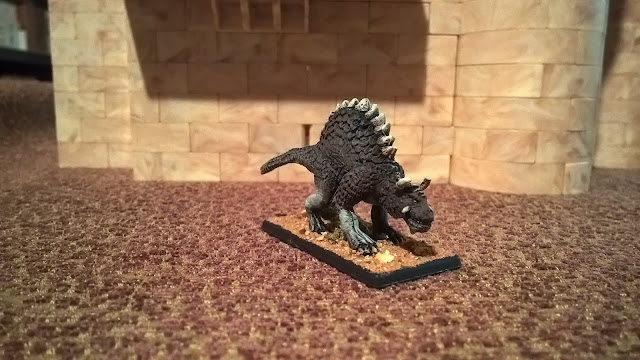 No. 11 was a classic old-school Rhino. 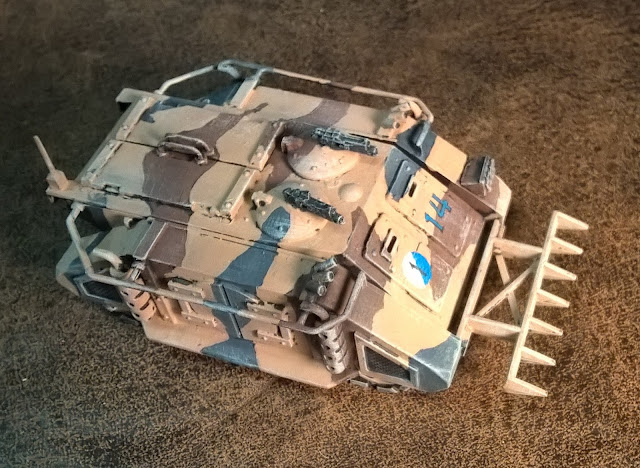 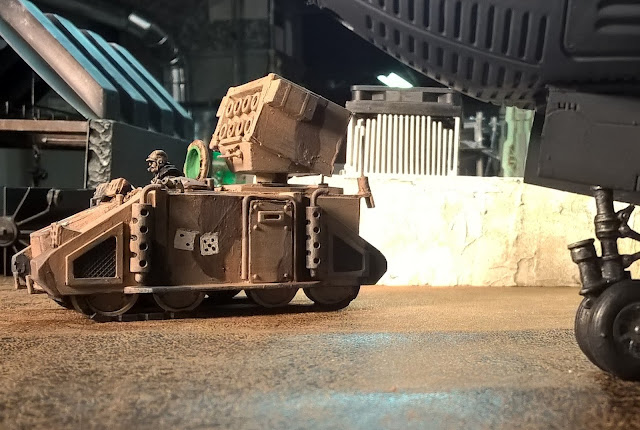 13 was a magical mystery dwarf. Yes, dwarves too can work magic. Honest! 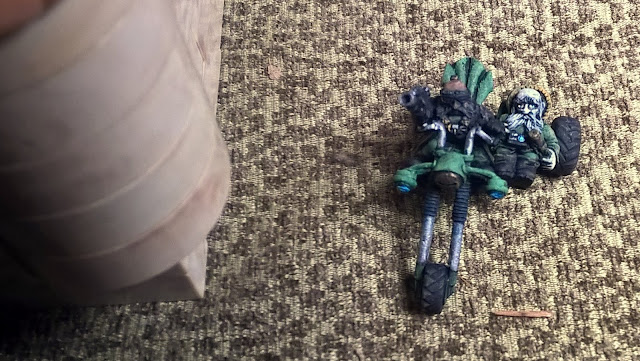 14 stands sentinel with the Moab Militia. 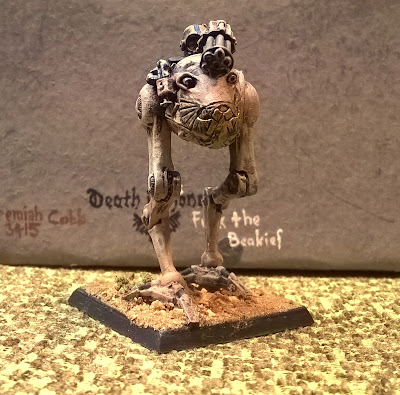 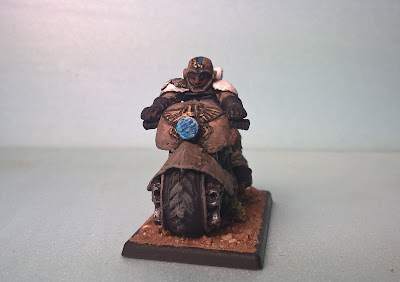 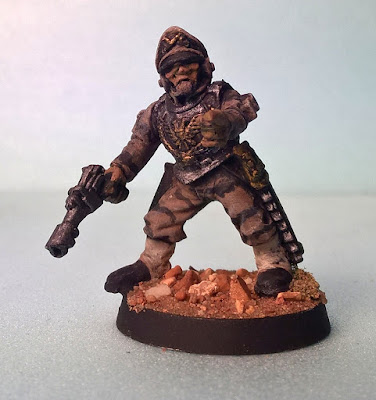 17 and 18 is a pair of armored Bob Olley dwarves. It's all about the mechanical beards! 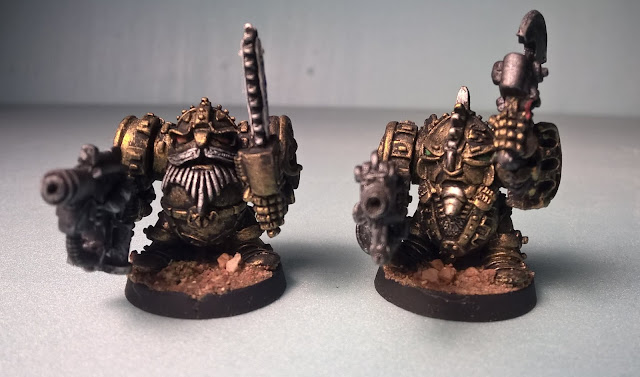 19 was a classic Olley space pirate. 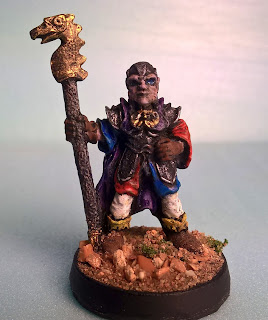 All of this, equalling my entire 2018 output by numbers and vastly exceeding it by mass, was finished by June. And then in July I was whisked off to the UK for three solid months and I've been fighting to get back on my feet ever since. So . . . crickets.

At some point, nearly forgotten, I managed to paint a little Demonblade gobbo. I was struggling to decide how to paint his dew-rag, so . . . Freedom for the win! (Why an short orkoid is wearing a flag from some forgotten empire we may never know.) 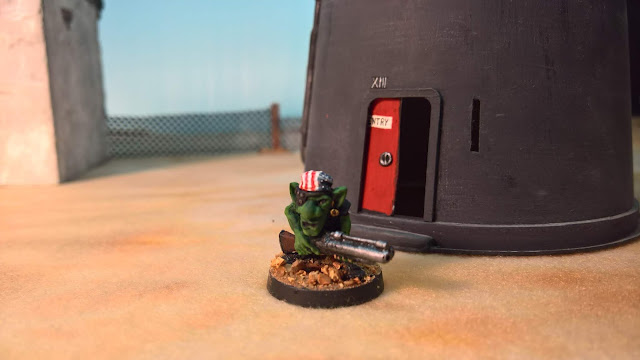 Last of the year, no. 21 was a Ramshackle chaos warrior for the Oldhammer Forum Miniature Exchange painted in the fading hours of late December. 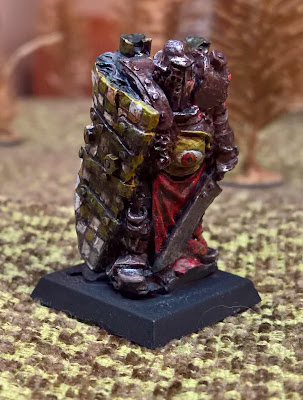 This is what happens when you're proud of getting something done. Hubris has a price. I said "I suppose it's statistically unlikely there will be quite so many distractions competing for my attention." Boy was I wrong about that! Keep your mouth shut, David.

Still, it wasn't a bad year at all, really, even if short. Unlike 2018 I actually DID accomplish some of the goals I had set out previously: to wit, the gang now has a starship big enough to make story sense, but compact enough to fit on a table. And a quite delightful one, I think. And I got other ships done. (Well, other ship, really.) So there's now a modest collection of ships to grace a starport. Enough to make a place look almost busy. :) 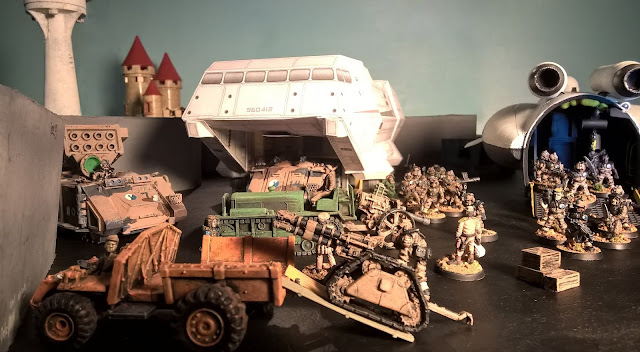 1. The gang STILL needs a hideout.
2. It would be nice if all my spaceports didn't look quite so similar, so more spaceport accessories.
3. More buildings would be nice. A temple and a bar in particular. Maybe a fancy house. (I'm having some ideas there.)
4. Maybe a few more civilian vehicles to clog up city streets.

So let's maybe make 2020 a terrain year. Sure, I have a mountain of miniatures to paint. But no particular goals. We'll just let whimsy take its course there. But terrain, that'll be a good goal.

Anyway, thank you for following along. Sorry for the long silence. Hope with me I can actually spend more time at home than continents away for a while. (I love travel, but there's a limit.) Onward year of the rat!