Welcome back, space fans. Let's recap the first take of the pilot episode of our Pulp Alley campaign . . . Showdown at the Graceful Ghost:

The scenario pitted two rival crews against one another. Some might call them smugglers, or even pirates, but we'll give them the benefit of the doubt and simply call them independent merchants specializing in "small, high-value parcel" acquisition and delivery. In the left corner was the opponent, Goldberg Street, with his trusted crew: Otto, Sturgis, Goldberg Street himself, Legs, the Beard, Lawrence (or Lawry), and Gunner. 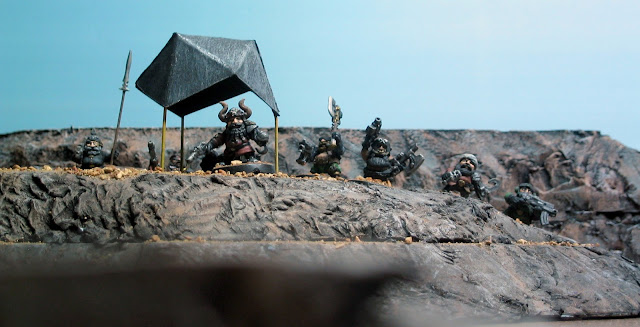 To their mutual chagrin they were joined by Squiggycap with his Mystic Crewe of Bashus: "Lumber" Jack, Four Arms the Wonder Twin, Fritz, and to the right Deuce and a Half (who closely resembles a truck in the right light.)

Also appearing in this episode were Doc Hobble and Mr. Burn with their Delightful Dreadlies and dis-orderlies. 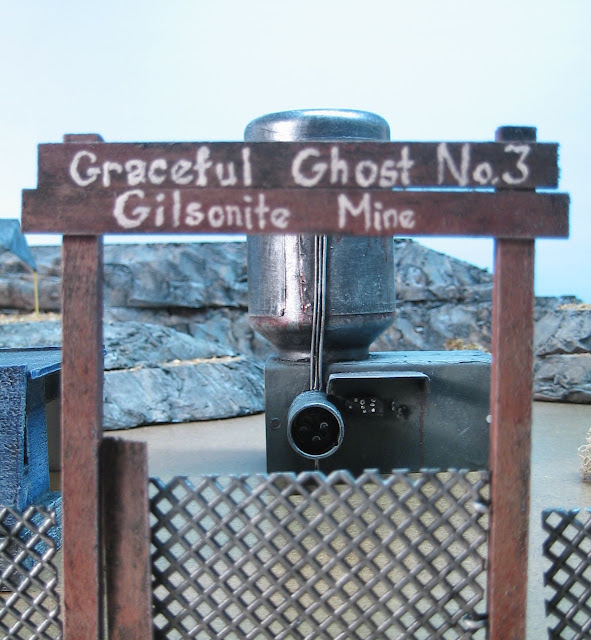 Sabryin Owlfeather's Lace Rock Gang entered from the southeast corner of the table. (Assuming that the Graceful Ghost sign is south.) Goldberg Street entered from the northwest. Glodberg Street's boys immediately vaulted the fence and took up positions behind the large hill in the middle of the mine complex. Jackie Chu's gang fanned out behind the several buildings immediately inside the gate, with Shorty McMster heading the long way 'round the machine shed.

The first couple of turns were uneventful, but by turn three a large firefight had broken out in the center of the complex with the dwarves essentially pinned behind the ridgeline and the (mostly) humans spread out in the entry yard. 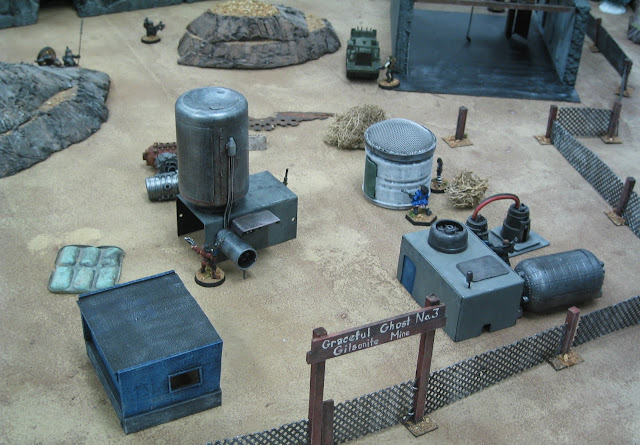 The first casualty was Kitty Luong, whom you see behind the cylindrical white shed. She took the fall on about turn four. (She's a very talented girl, but small and slightly breakable. Oops.) On turn five or six Shorty McMaster came around the back and outflanked the pirates. At that point several of them ran for cover inside the mine and found the loot. They took the crates closest to the door.

A turn or two later, after the dwarves vacated with their booty, Shorty entered the mine and found the Graceful Ghost . . . 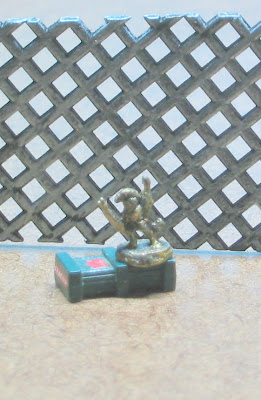 only to be possessed and start shooting like a slightly mad elf at everyone nearby. Maybe he thought his dear shepherdess Lorita had run off with some other clown. On the positive side, given the outflanking maneuver, all nearby clowns were as dwarfish as Shorty and twice as piratical.

At this point Chu's gang began charging up the middle of the site, hoping to stop Goldberg Street from getting all the darned loot. This lead to an interesting mele on the hill and some smaller fights over by the fence at the northwest corner, where the dwarves were trying to make a break for it. Ultimately by turn seven The Beard, Otto, Lawry, Shorty, and Lorita had each taken loot and begun to make a run for it.

On turn eight, things got a bit more sticky. Cap'n Squiggycap must have heard the funfire (gunshots to Orky ears) and decided there was a party over at the old mine. He and his boys showed up. Of course he came in on the east side of the site. Must have been camped out there in the wilderness somewhere. And on turn nine things got even more interesting when Doc Hobble and Mr. Burn showed up too with their collaborative moving sculpture project. (Angry repurposed junkpiles complete with large weapons and a desire to shoot . . . everyone. Think of it as an ensemble performance piece.)

The dreadful dreadnaughts saw no need to jump the fence. They just knocked it down and began dispensing their Christmas crackers. It's a party. Everyone should play! While Squiggycap was madly enlivening, or should I say endeadening the soiree on the hillside the dreadfuls broke up the dances down by the fence. And heroes great and small began to drop under the pressure of bullets from three or four directions and axeheads the size of snowshovels. (Though doubtless weighing much more.)  Hary went down. Kara Stone took a fall. Even Chu lost his footing and let Lawry get away. Of course Shorty "Klick" McMasters, brother Lawry, and Otto were spreading the typical dwarven love for their friends the orks, but no matter how many fell there always seemed to be more. 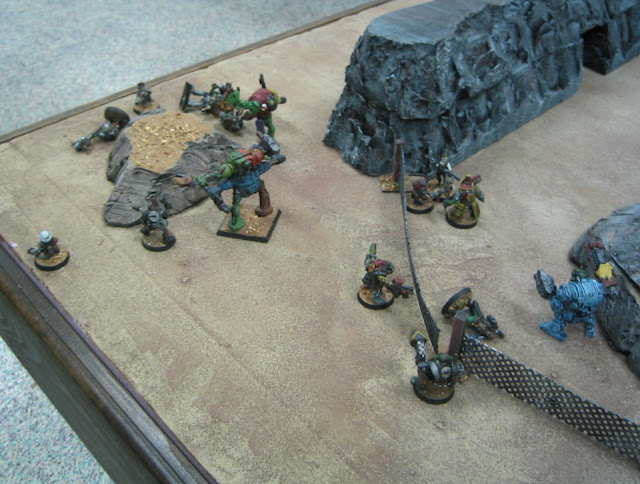 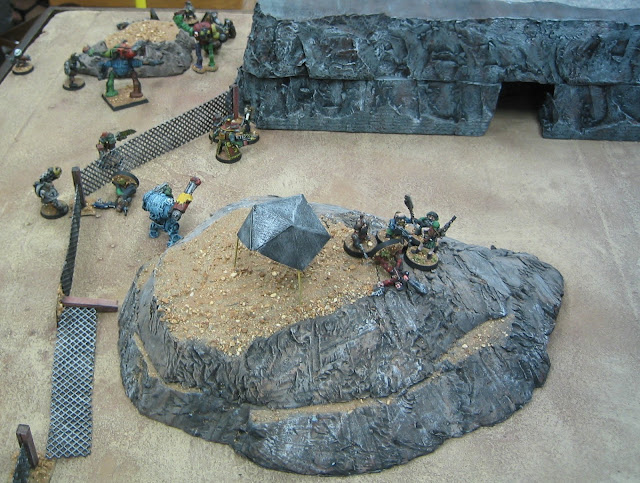 At the end of the night we ran out of time. Chu and Kara were pretty much surrounded by hostile green. Van Erikson was down in a bad place and Musetta was likely to be following shortly after. The dwarves were mostly suddenly in a position to bolt and escape, though it was doubtless going to be a little harry for Goldberg Street, Legs, and Gunner on the hilltop. I figure in the end the rest of both gangs probably got away. Chu's just too tough for that bunch of greenskins. But where did Kitty end up? Why didn't she show up at the rendevous? Maybe it's time for Goldberg Street and Chu to call a truce and figure a few things out.

Tune in next time as Chu and the rest of the gang attempt a good old fashioned snatch-and-grab in Hello Kitty on a Hot Tin Roof.
Posted by The Composer at 1:25 AM