Grim-dark Titans of the Vintage Future! Now with More Ed!

A few days back I got a request on TMP for more pictures of my little friend Eddie. I hate to disappoint, so I have taken a few more photos of the vinyl warrior in question. This is a very old model and the photos are quite plain, but they do give you an idea of what a simple conversion of an old toy can do for your gaming table with but the crudest application of sponge paint. (Yep. I sponge painted him. I was . . . 17? More or less? Long time ago. Sponge paint and some drybrushing.)

First off, here's a pair of full frontal shots with some older Citadel miniatures for scale comparison: some converted Space Wolves and a Whirlwind. 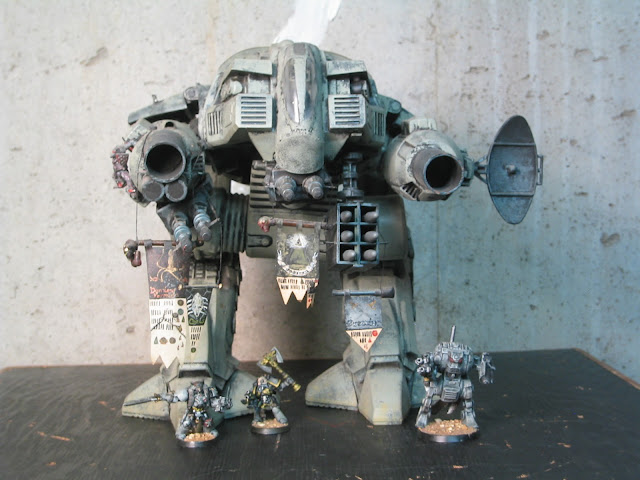 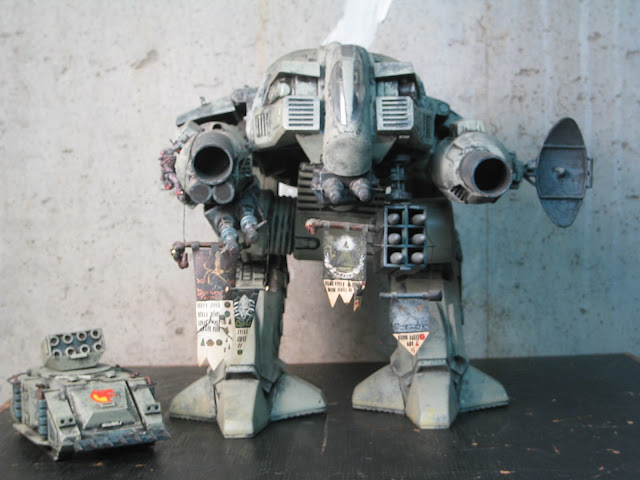 Next we have a detail shot of "Tom." You get a glimpse into the cockpit on this one. Tom is a piece of electrical conduit and a pair of sections of wood dowel. (I should really have drilled those out, but hey, hindsight is 20/20.) 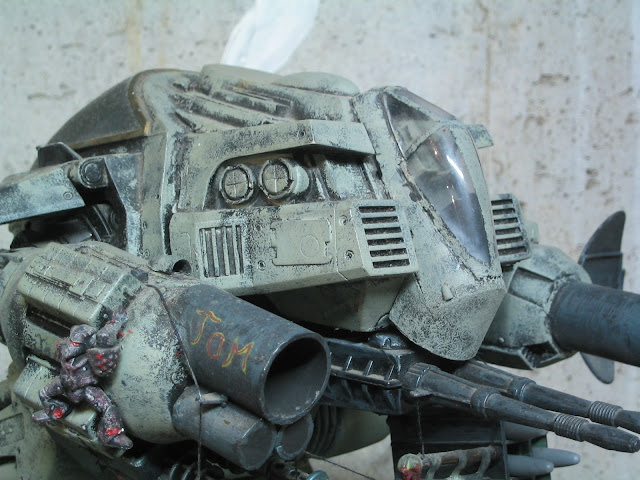 "Tom" is, of course, good friends with "Dick" and "Harry." Harry is more electrical conduit. Dick is a G I Joe toy acquired from a friend for the purpose. (Likewise the two dual laser turrets and the radar dish.) 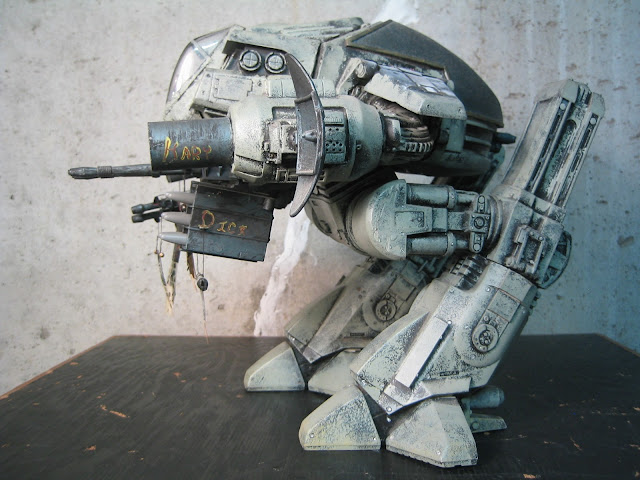 Of course Tom has a friend slowly bleeding out. The chaos trooper seems to have lost a few of his nails, but these can be replaced. Surprising that he hasn't completely bled to death in . . . twenty some odd years, but the blood is still fresh and red. Still hanging in there, it seems. Ah what you could do with a beaky. (Several beakies were sacrificed to the greater glory of Ed. Crunch all you want. I have plenty more. Even now. Sad that no one makes them these days.) 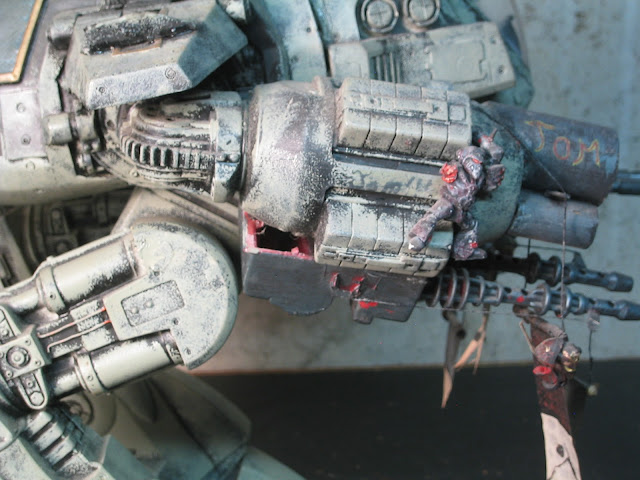 Of course this is perhaps about the view that Mr. Chaos had before being crucified alive. If you look VERY closely you can even see the access hatch that I added to the underside of the hips. (How the heck is this thing suppose to balance and move, exactly with two legs that far apart? And why am I asking space fantasy to be constrained by physics?) 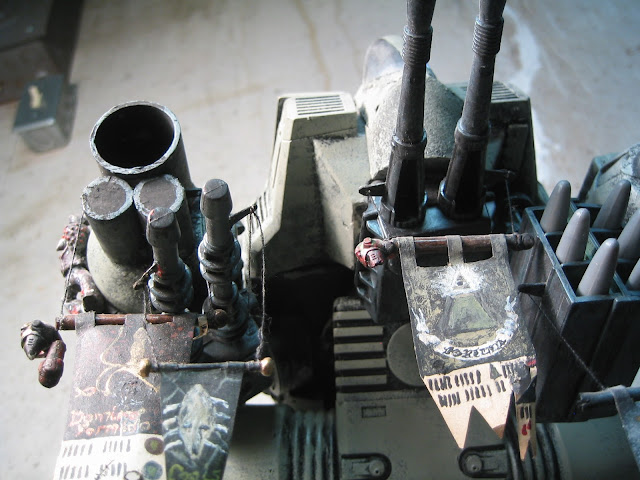 Our increasingly late chaos warrior would no doubt rather have had this view. The exhaust ports were the original guns, lovingly removed with a razor saw to be replaced with a larger and gaudier arsenal.  Nothing in the GW universe could possibly have too many or too large guns. 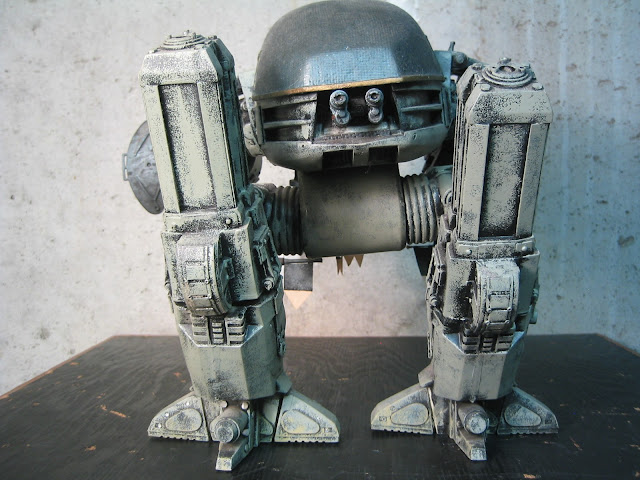 Wanting more Sc-Fi clutter I added ammo boxes, wheels, drop tanks, and what have you to the already beefy droid. Busier is better in Sci-Fi. 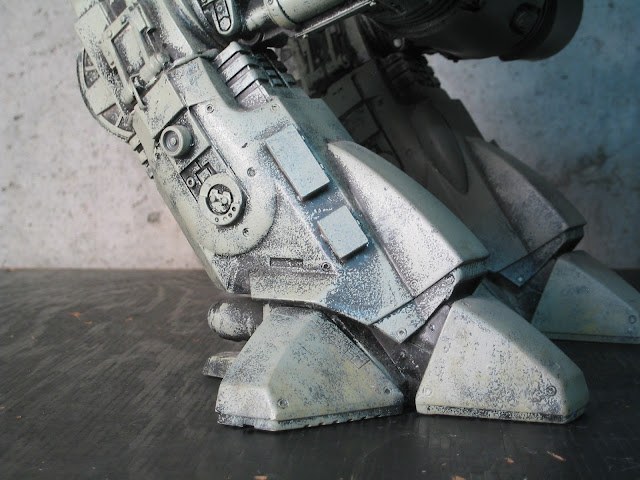 Here's an overhead with the Whirlwind for comparison. 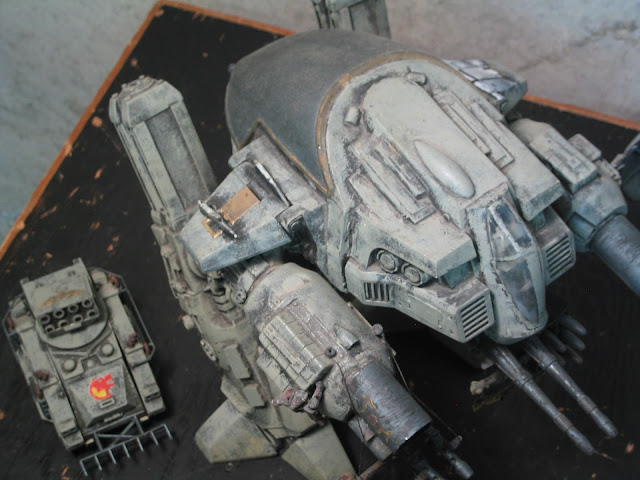 Finally, here's another look inside the cockpit. The glass has fogged over the years, but you can see two crew positions for the half dozen or so folks that might have fought aboard this awkward land leviathan. The pilot would occupy the position on top and the commander that below. Elsewhere would be several gunners, an engineer, and perhaps a communications officer. The consoles and controls are generally from 1/48 aircraft, mostly a battered B-29 bought for parts as I recall. The cockpit itself is from an A-10 also bought for parts. The drop tanks, airscoops, ammo lockers, motors, and so forth visible elsewhere are from assorted aircraft, tanks, and artillery models. (I had a lot of models and thus a fairly large supply of spare parts. Monogram kits always came with extra options and I sacrificed one or two kits over the years to the Warhammer gods.) 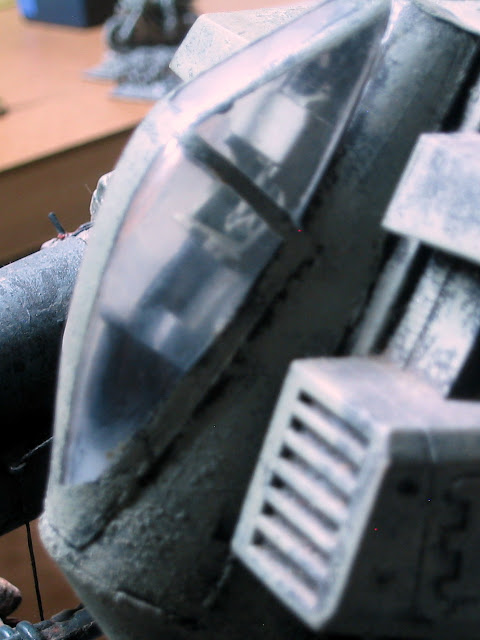