No Draught-Dodgers in the Merchant Marine

There could be several reasons for this: Maybe you can't just "comb the wakes" of requisition orders. Guided missiles, those. Maybe it's the desire to avoid grounding and subsequent loss of pay. Or perhaps it has something to do with the ale-lager-porter-pilsner-stout house. I've yet to meet the sailor who could pass up a decent beer. (With the definition of decent enjoying significant regional variation, of course, but sailors, by-and-in-large, seem a flexible lot on that point.)

Anyway . . . after that terrible bit of nonsense we shall get back to small ships.

Some weeks back I implied that there were more ships waiting to be posted. Below you will find a variety of different merchantmen conscripted into military service. (Or built for it, but with an eye on a civilian life after the war.) 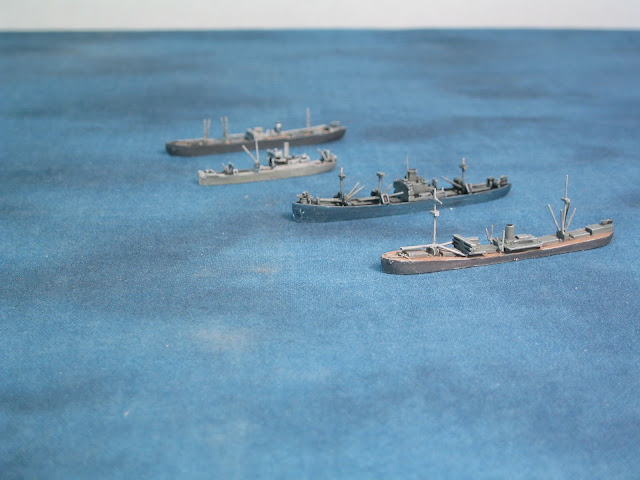 In this first picture we have, from front to back, Dodd line steamer SS King Edgar, US Liberty Ship SS Jeremiah O'Brien, French transport Golo,  and finaly Canadian pulp and paper carrier SS Corner Brook. The first model is a C in C "Doxford." It's a nice size ship that adds a little variety, but the casting is a little flat for my taste. The next two ships are Viking Forge castings of Seabattles originals; both quite excellent. Finally in the back is a casting I've not yet managed to identify. It came as part of job-lot. It feels rather like a nicer C in C ship, but I can't find one matching it in their catalog. No matter the original, it's a decent fit for Corner Brook. (Please do remember my merchant and auxiliary ships are often much more approximate than my warships. I research them and attempt accuracy, but there are times all I can find is dimensions or even just registry tonnage. My depictions should not be misconstrued as fact. They are gaming models to which I attempt to impart character through research and detailing.) Here's a closer shot of Corner Brook. If anyone can positively identify the model I would be grateful. 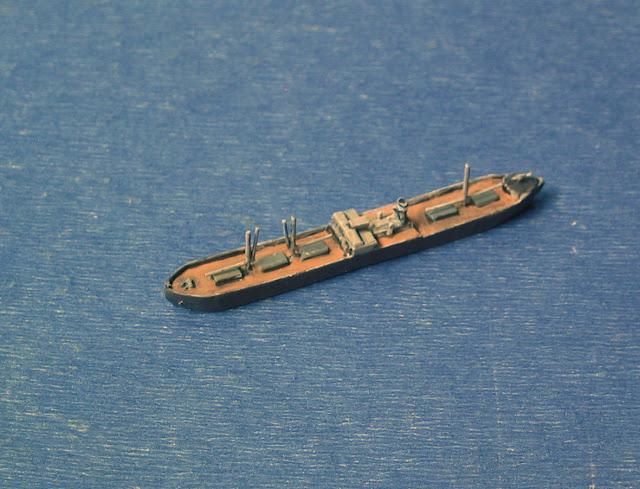 Below is a much loved Texaco ship, SS Ohio. 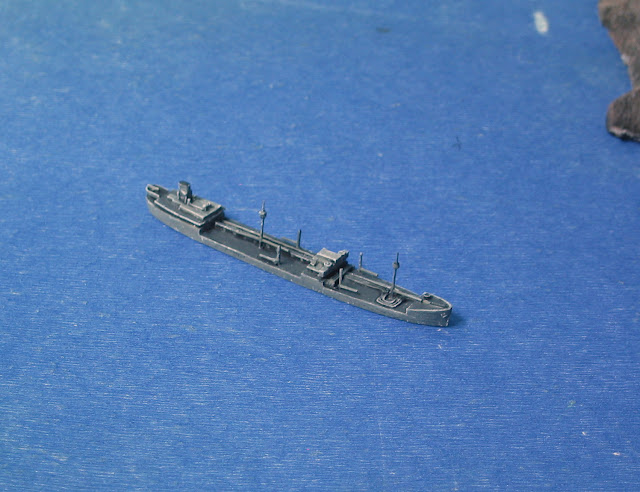 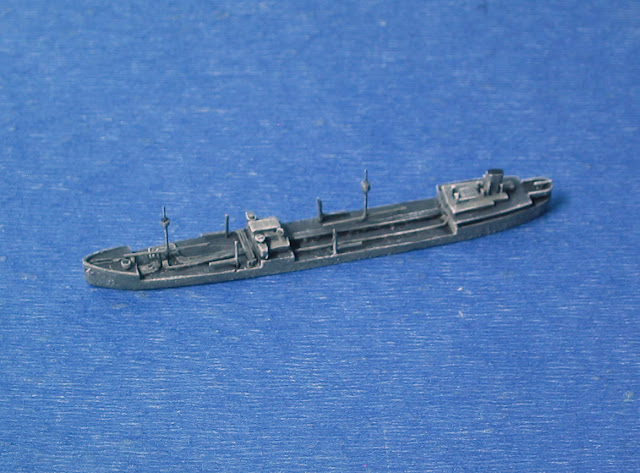 This model represents a rather more extensive conversion of a C in C T2 tanker. I had intended to show in progress photographs of this ship, but I seem to have inadvertently deleted them, so I will do my best to describe the process. I began by removing the catwalks, thinking Ohio had none. I later regretted this, as I found a good model that I believe to be accurate with a catwalk aft, thus I was obliged to fabricate a new one. Fortunately, this isn't a particularly difficult task.

The most interesting part of the conversion was the quite obvious maze of piping forward of the island. Ohio was outfitted with pumping equipment so that she could offload at unimproved ports. I suspect much of this piping represents that equipment. For this I used .010" styrene rod, which is rather small and quite flexible. I cut an approximate length and immediately glued the forward end to the deck just aft of the fo'c'sle, securing it in place. Next I made each 90 of the expansion loop and tacked that down as well. Finally, I trimmed the excess rod off and glued down the aft end. This could be a little imprecise, as this end would be covered with even more pipes later. By this method I was able to create a simplified approximation of the pipework on the larger model. (I've not yet found a photograph of Ohio from above, so I can only assume the model is essentially correct.) Once all of that was in place I added the second layer of piping just forward of the bridge and a few large pipes aft. Since these were all straight there was no particular difficulty. Finally, I finished her off with the usual masts and spars and painted her up making what I believe, if you'll pardon my presumption, might well be the finest 1/2400 model of Ohio on the net. (She's the only one I've seen with roughly correct deck detail.)

Lastly, since I don't have art of the above conversion, I'll discuss my conversion of AO-1 USS Kanawha, which was similarly extensive. This ship began life as a Viking Forge model depicting her approximately as she appeared in WWI. Like most other ships that served in both wars she'd been extensively updated in the interim, so I stripped her almost down to the deck. I started by removing the aft portion of the catwalks and forward island, since these had both been replaced between the wars. I saved the island for re-use. It became the core of an enlarged amidships island. Next I built up the platform deck aft of this island. Since this is a rather rough casting without terribly much detail I elected not to completely strip the paint. In retrospect this was probably a mistake, but I can live with it. 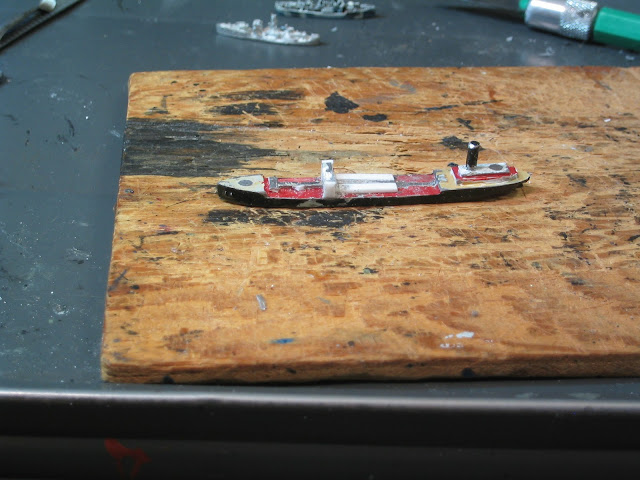 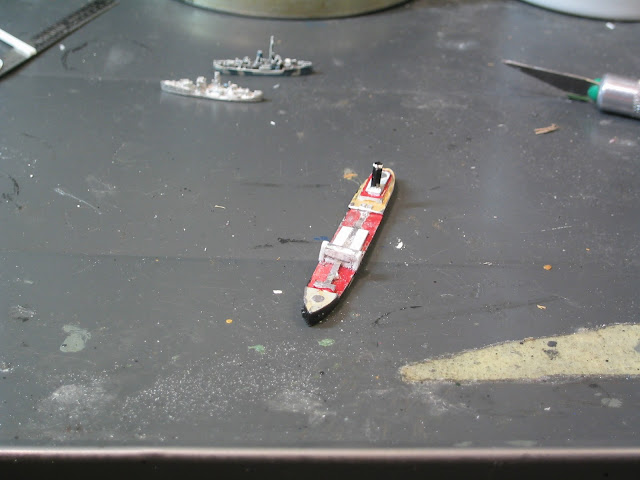 Next I added masts, platforms, AA weapons, a searchlight, and anchor chain. I've attempted to use the stern gun as a pattern for a new mold, but I haven't been completely happy with the resulting castings, so I suspect I'll continue building up large caliber DP weapons for a while yet. The second mount aft of the bow and the second to the last forward of the stern are two of the much maligned "Chicago pipe-organ" quad 1.1s. I still don't have a decent master of that either, so these too I built up. (For those unfamiliar, I squash cast dual and quad 40s and plan to cast more details as I manage to make decent molds.) 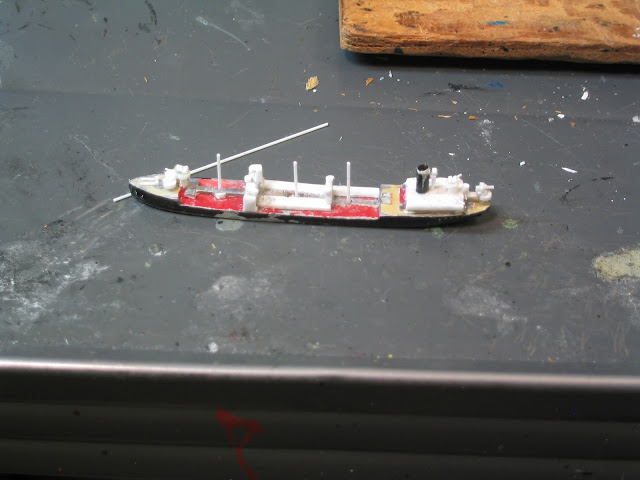 Lastly I added spars, radar, ventilators, ship's boats, and crow's nest. (Yes indeed, it would appear Kanawha had radar by mid 1942. That or there was a program to lash bed-springs to the mast of every ship in the Navy to fool enemy observers . . . who were generally too far away to see that kind of detail . . . or maybe GE and Westinghouse and friends just cranked out that many sets.) 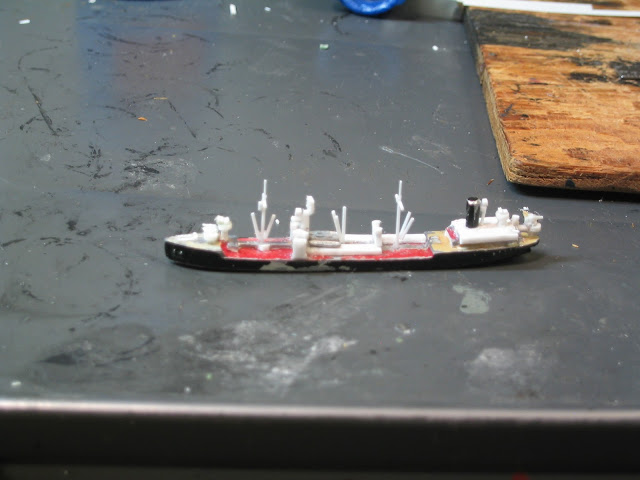 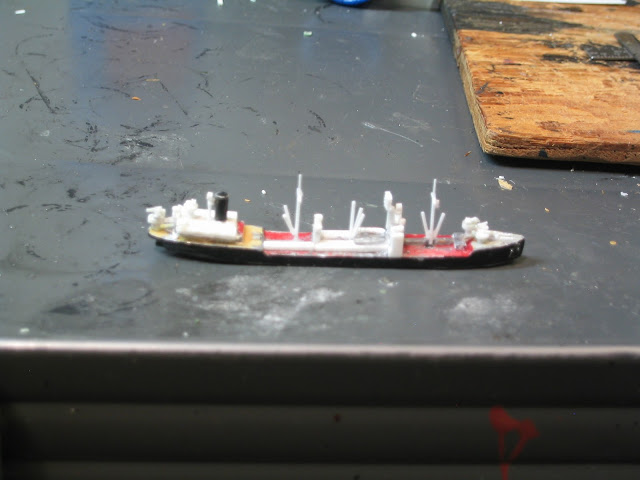 Here's how she eventually turned out. Not perfect, but not at all bad. 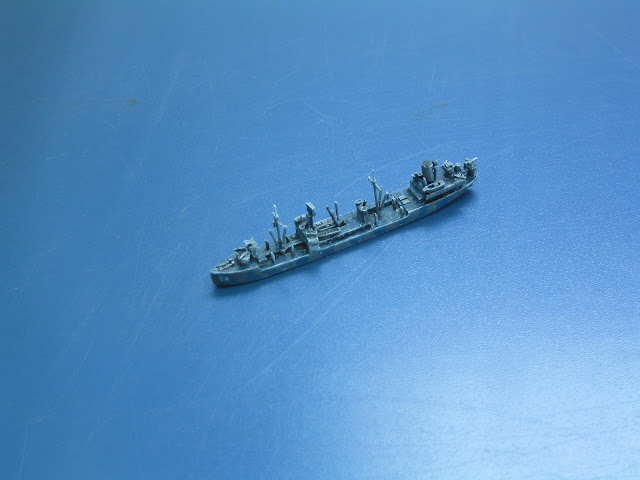