Lately I've talked a lot about Viking Forge and Seabattles. This is in part a side effect of my own comparatively recent discovery of their offerings and also a result of the number of unique and interesting models in their catalog. The bulk of my collection is Panzerschiffe: they clearly offer the most ship for the money in 1/2400. Viking Forge is still a distant second, but now that they've assumed that slot I can't imaging anyone else will threaten it. Their merchant ships and ASW escorts are, in my opinion, the finest in the scale. Along with Panzerschiffe, they are quite unusual in offering small boats from multiple nations. Where most suppliers are content to stop at fleet destroyers and perhaps a version of the ubiquitous Flower class, Viking Forge offers several flower variants, generic sloops and trawlers, various US Coast Guard cutters, and even some Japanese ASW escorts. I've talked about some of these (along with some Panzerschiffe minesweepers, torpedo boats, and tugs that did ASW duty) in other posts. These I will leave aside for now, instead singling out my recent builds.

During WWII the US Coast Guard operated as a part of the Navy Department. Coast Guard cutters performed quite a variety of duties in weather and ice patrols, as convoy escorts, and even transporting troops and supplies in combat areas. Among the newest ships in Coast Guard service at the outset of hostilities were a group of "high endurance" cutters known alternately as the "Secretary" or "Treasury" class. Each was named after a secretary of the US Treasury department, which controlled the Coast Guard during peacetime. Following USN convention they should most properly be known as the Campbell class, since WPG-32 Campbell appears to have been the first one ordered. 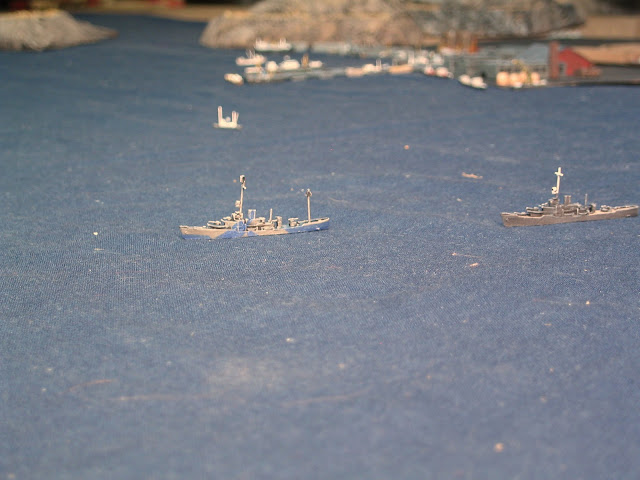 The two ships above are USCGC Campbell and Taney. Campbell, on the left, is interesting as she was one of the first US ships fitted with HFDF equipment for sub hunting. On the right, Taney was present in Oahu during the Pearl Harbor raid.  She's now a museum ship in Baltimore and bears the distinction of being the last vessel present at the battle still afloat. Campbell is wearing a variant of a camouflage scheme called the "Thayer" system in the United States. Taney is depicted in the MS-1 grey she was wearing at Pearl Harbor and, so far as I can ascertain, retained into mid 1942.

These two models are both Viking Forge castings of Seabattles originals with considerable modification. As bought the models are great depictions of the cutters in their peacetime guise. I took the liberty of militarizing them, adding guns, radar, enlarging islands, and otherwise lightly detailing them in the usual fashion.

In some significant ways the Treasuries were more the exception than the rule. Most Coast Guard cutters appear to have been humbler, homelier looking boats. Where the Treasuries were purpose built light warships, typical cutters were much more closely based on civilian designs. Below are three vessels that better reflect this norm. Where Campbell and her sisters feel almost like small destroyers, Tallapoosa,  Haida, and Algonquin look like tugs and trawlers. 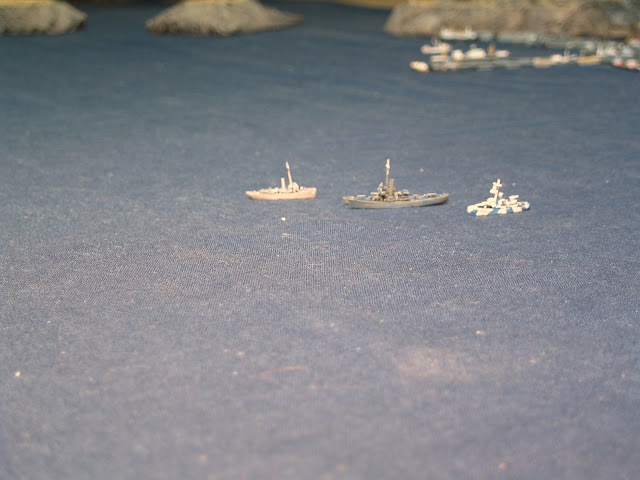 Tallapoosa, on the left and wearing MS-3 light grey, is the oldest cutter of the three. She was built in 1915 to replace a revenue cutter named Winona and ultimately served in both wars. Among other duties, she patrolled as a convoy escort. By the Second World War her age limited her utility somewhat and she ended the war observing blackout conditions. Haida, in the center and wearing MS-12 mod, was part of the four unit Tampa class built by Union Construction Company of Oakland in the early 1920s. These ships played diverse roles, serving on ice and fisheries patrols, search and rescue duty, and enforcing prohibition. Leftmost in Thayer patter camouflage, Algonquin is the newest of the three, in spite of her diminutive size. Her design was apparently based on the earlier Tampa class (explaining the resemblance). Throughout the war she served in the Atlantic escorting local convoys. (Tallapoosa and Haida histories taken from Wikipedia. Algonquin from uscg.mil/history.)

These three cutters were bought as part of the USCGC "party pack." They're absolutely wonderful additions to an ASW force, though it's a bit of a chore figuring out what the models depict, given the random "blister pack" style assortments without the helpful information cards of more casual games. I initially dug through Jane's, wikipedia, Conway, and maybe one or two other encyclopedic resources I can't immediately recall. While this wasn't quite completely conclusive (the models, after all, seemed generally peacetime while the texts showed mostly wartime appearances) I was able to later confirm them against a Seabattles catalog and to fill in the one or two remaining questions by process of elimination. All are lovely little models and required only light detailing and militarization. In general they were not updated quite as heavily as their larger counterparts since they didn't have the legs for deep-ocean escort.

Of course if you want the ubiquitous Flowers, rest assured that Viking Forge can oblige. Below are three models bought in a package of six. VF sells three types of Flower. Given the size and duration of the production run it's not surprising that there was considerable variation in armament and even general arrangement. Sheer lines were changed to improve sea-keeping. Stores were altered. Armament was updated as new developments allowed. In many ways it's a little deceptive to think of one Flower class. Thus it's quite nice that VF has three options that differ somewhat from other suppliers. The trio below are probably the earliest of the three varieties on offer. Depicted are Gladiolus, Nasturtium, and Aubretia. 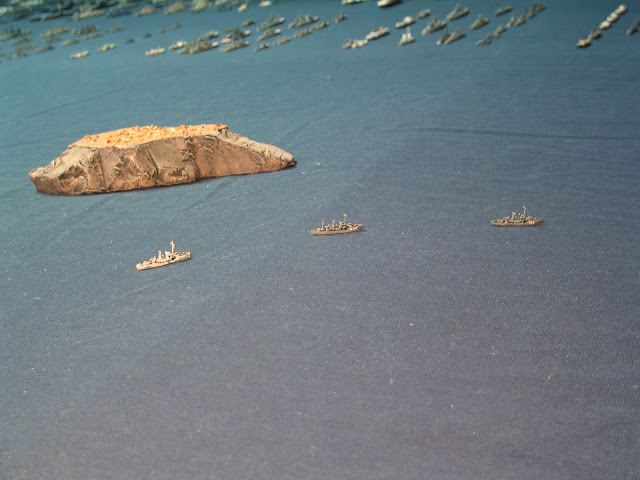 It is unbelievably difficult to get good information on the appearance of such modest ships when one lives a thousand miles from the nearest ocean, and thus from the nearest repository of such art, but once in a while one gets lucky and finds good things on the internet. Aubretia is such a case. I first saw the checkerboard pattern on a website called www.schroeder1250.de. Thomas Schröder appears to be the man behind some of the loveliest ship models and dioramas I've seen, and the challenge of doing a very small part of what he does in half the size was intriguing. I was able to find photographs confirming the checkerboard, though I have no explanation of its significance. Reproducing it accurately was impossible given my modest talents and materials, but I could at least suggest it in a simplified form, which I have done.

Below you can see the Viking Forge "Begonia class" flower next to the GHQ model. The differences in sheer between Aubretia and Dianthus are fairly obvious. Also apparent are variations in the islands, stacks, and armament. Both castings had minor flaws: the Viking Forge casting had a small void that needed to be filled and the GHQ casting was somewhat misaligned, requiring considerable filing to make it straight. In the end both turned out well, but neither was easy. 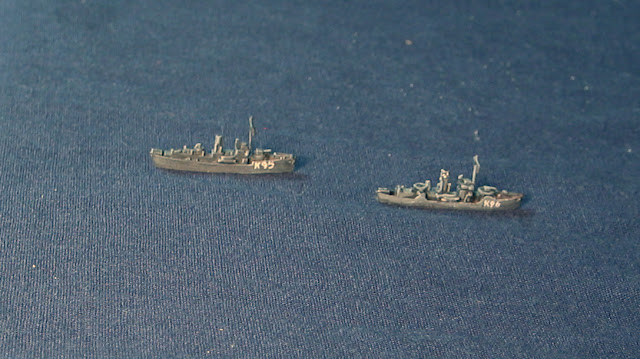 Yet another interesting Viking Forge offering is the French trawler below: La Nantaise. 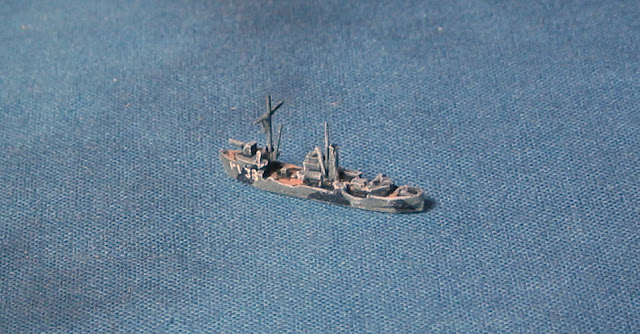 La Nantaise is sold as a La Toulonaise class armed trawler. These turn out to be British merchant trawlers taken over by the RN and then handed off to the French. As such it wouldn't be at all out of place to use them as the British fishing trawlers pressed into ASW service by the hundreds. Similarly, there is a generic trawler in the WWI line that could also make a great improvised escort, but that's a project for another day. The only one I have painted up depicts a civilian without benefit of any armament.

I'll close up with a last picture of Aubretia. I am incredibly pleased with how well this little model came out. 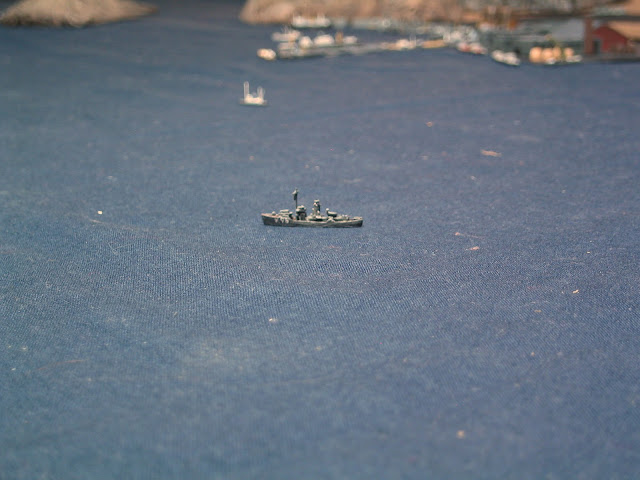