In the first of my recent posts I hinted that I'd worked on a number of light combatants. Among them are the French "Avisos" or colonial sloops pictured here: 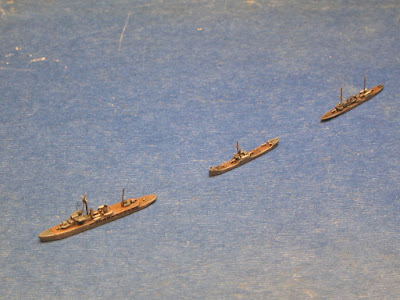 These three depict Amiral Charner, Tahure, and Marne. Each is from a different class of "Aviso." Tahure, amidmost, was built as an ASW sloop of the Arrasclass during WWI. The very freighter like silhouette was intended to fool submariners so that she could draw them in close and sink them with deck guns. The trailing ship, Marne, belonged to the roughly contemporary Oise class. As you can see these did not incorporate the profile trickery. Leading this small division is the larger and more modern purpose-built Bougainville class colonial sloop Amiral Charner. Some fifteen years newer than her companions, she was designed specifically with East-Asian station keeping in mind, much like some of the British and American river gunboats. Along with a second Bougainville, Dumont d'Urville, and the cruiser Lamotte-Piquet these ships comprised the "Groupe Occasionnel" that contested the waters off Koh Chang with a group of Thai torpedo boats and coastal defense ships.

The three models are from Afrodi of Objects May Appear. He sells several fairly extensive lines, including not only the small combatants from Koh Chang, but quite a few modern ships in a variety of scales and a number of science fiction and fantasy miniatures. As I do with virtually every model I build I added masts and some smaller details, but they're pretty solid little models and would paint up quite adequately without any additions.
Posted by The Composer at 10:48 AM