I've been involved in an online discussion lately where a group of us are trying to refight the Second World War as Japan. We represent a kinder gentler Japan. (Though one still bent on securing the resources we need for independence. And liberating East Asia from colonial oppression seems the way to go about it.) For the most part this has involved cleaning up our military, treating the locals with decency so that we can gain their support, waging a PR campaign in the United States so that the electorate there knows that we genuinely have swept away Tojo and the militaristic nationalists, and of course lots and lots of logistics. (How many c. 5" rifles can we build? How many graving docks over 600' do we have? How much steel? How much rubber? How much bauxite can we get from Indochina? How much oil from Borneo? How many additional merchant hulls will we need? How can we prevent losses? How much efficiency will we lose by instituting a convoy system? Can we afford conversions? Destroyers? Carriers? You get the idea.)

Well, in the midst of all this serious talk our esteemed Prime Minister, while talking about what to call some of our proposed special use infantry units, suggested "storm troopers" and wondered if we could get someone from Hollywood to write some theme music. Well, that was enough for the good Admiral Noka Shijin. In his academy days his friends called him "Shinfonikku Shijin." (Or Symphonic Poet if you prefer English.) So he blew the dust off some "theme music" and posted a couple of videos to YouTube featuring our fleet, and one with some trolls and goblins just for entertainment. (Should we wish to be evil and twirl our mustaches.)

Since this is falls at the very intersection of all that I try to write about here, save for the poetry, I would be quite remiss if I didn't repost it . . .

So, if you want to hear my third symphony, you can listen to the first movement on YouTube.

Since it's longer than their beblasted ten minute limit there's also a second part to said first movement.

And the mustache twirling (from a ballet I wrote for my late sister) is also available for your listening pleasure. (With orcs.)

Sincerely,
The Composer
Posted by The Composer at 12:49 PM No comments:

Anna and the King of Siam's Navy

If you follow the NavWarGames group on Yahoo you've perhaps encountered a gentleman who designs by the name Afrodi on Shapeways. One of his real specialties is underrepresented fleets: fleets like the modern Japanese and French fleets (quite significant, but sadly absent from the "major" suppliers) or The WWII era Thai fleet.

In 1941, at about the same time that the United States and Japan were really gearing up for war and the UK was slugging it out with the pesky Kriegsmarine, Thailand had a little war with Vichy France not generally remembered in the West. The larger conflict was fairly successful from the Thai perspective: they acquired several predominantly Khmer provinces, at least until the U.N. made them give them back in 1946. The war at "sea" was less auspicious. In fact, the colonial French pretty well handed the Thai fleet their fantail at the Battle of Koh Chang.

With thanks to Afrodi, the miniatures to refight this small but interesting war are now commercially available. Here you can see some of the Thai ships in both their unpainted "Frosted Untra-Detail" format and with the fiddly bits and paint I find so needful: 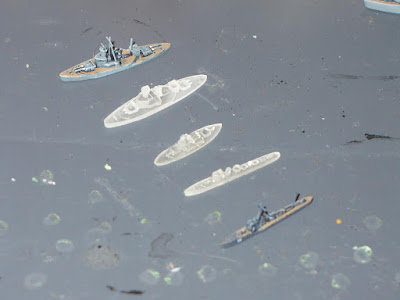 For the sake of scale you can see the Thai coastal defense ship Thonburi and the torpedo boat Trad alongside the Japanese Kagero class destroyer Tanikaze. 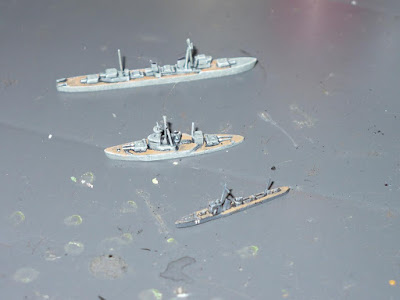 The scale is pretty well dead on. These are just some very very small ships. The colonial french sloops were bigger. (And Afrodi sells them too.) In general, I'd say the models are pretty good, though Thonburi's rifles were mere stumps. I added longer barrels and simply used the "stumps" as blast bags. If I had to guess, I'd say that it's probably not possible to form long slender objects with the Shapeways process.

Additionally, most of the Trads had three 3" inch guns, and the model is only depicted with two. Phuket seems to have lacked the amidships mount if the photos in Jane's are any indication. (I am, of course, amused that Jane's seems to intentionally misspell the name of this ship. Modern sources give the first phoneme as a Ph, but Jane's uses a P. I wonder why?) That said, I'm fairly comfortable adding guns, and the platform is there, so I just stuck another gun on and called it good. I forgot to do this on my second Trad until I started painting the ship and decided to leave it that way. (And to use it as Phuket.) At table distance no one will notice.

Being me, I found it necessary to add the scopes for the range finder and the assorted masts and spars. I can never leave well enough alone. Still, the models are fairly crisp and neither too cluttered nor too simple. All in all they'll be a nice addition to my collection and my hat is off to Afrodi for taking this project on.
Posted by The Composer at 12:39 PM No comments: