December 7, 1941: After the Dutch refusal to accept the Japanese ultimatum Japanese forces land at Tarakan and Balikpapan in Dutch Borneo.  Admiral Karl Doorman, unable to oppose the Japanese with sufficient force falls back to Batavia.

December 8: England declares war on Japan in support of their Dutch allies and the oil embargo.

December 9: In the absence of sufficient air support Admiral Thomas Phillips realizes his force is exposed and his position is untenable. He falls back to Batavia and links up with Karl Doorman and the Dutch forces. He reports his position to the admiralty, but regrets that he cannot defend Singapore and orders it’s evacuation. Together Phillips and Doorman form a joint Australian, British, and Dutch command: ABDCOM.

December 14: Batavia comes under air attack from newly captured airfields on Borneo. ABDCOM falls back to Tanjungkarang on the south coast of Sumatra, just west of the Sunda Strait.

December 16: Dutch defenders in Batavia warn of Japanese landings and beg for assistance. Doorman and Phillips formulate a plan to force the strait and fall on Japanese forces in a night engagement.

This was the situation in the NIFTI command center, where Admiral Sabryin Owlfeather played the part of the Japanese and our friends Kurtis and Chris were obliged to be the British assailants.

I know, you’re thinking this will go well. ABDCOM has several key advantages: a larger force with a modern battleship in the vanguard. And of course inter-radio communications with VanGhoogle Translate should make communication a snap. Besides, Japan would never do anything sneaky to keep the foxes out of the henhouse, would they?

The scene opens with two Japanese "pickets" fleeing from the north side of Sangiang Island. These two small and unremarkable boats are Nasami and Natsushima and they've just spent the evening the naval equivalent of gumballs off their sterns. They belong to a category of ships one might call "minelayers." The Japanese force, hastily dispatched though it is, rests comfortable in the fact that they only need to defend one side of the strait. The mines will take care of the other. Quite reasonably, Sabryin deploys his forces on the northwest side of the strait, leaving the east side unguarded.

Sabryin deployed his destroyers in line abreast with his cruisers and capital ships immediately behind them. Kurtis and Chris deployed in four much more conventional columns, one of capital ships, the second of cruisers, and third and fourth of Dutch and British destroyers. The two forces initially closed blindly towards rumors of one another at flank speed. The British were counting on the surface search set aboard Prince of Wales to find . . . something. The first contact emerged from the noise of the island at around 0015, or rather I should say the radar watch officer picked it out, since it was a stationary contact. Twitchy gunners aboard the lead Dutch destroyer, Piet Hien, immediately opened fire on the very hostile (and surprisingly alert) AFW trawler (anti-fish warfare) that proceeded to flee at best possible speed towards the Japanese cavalry. (Odd, since the trawler was surely Dutch.) 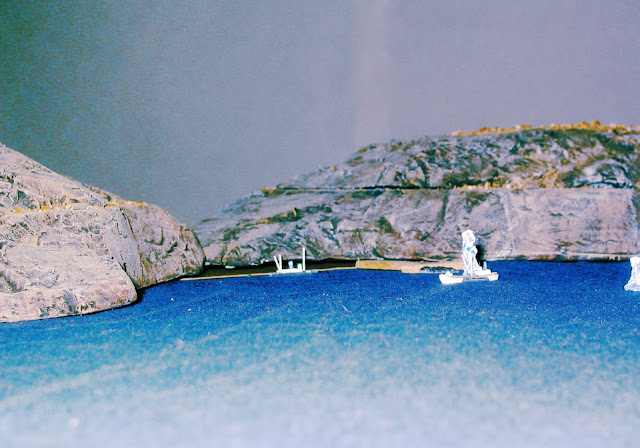 It probably isn't a great shock that the Japanese sighted the Dutch first. Before even firing a shot, the unfortunate Piet Hien was introduced to the Emperor's new oxygen torpedoes. Two 24" torpedoes at the edge of gun range sent the offending destroyer to the bottom. 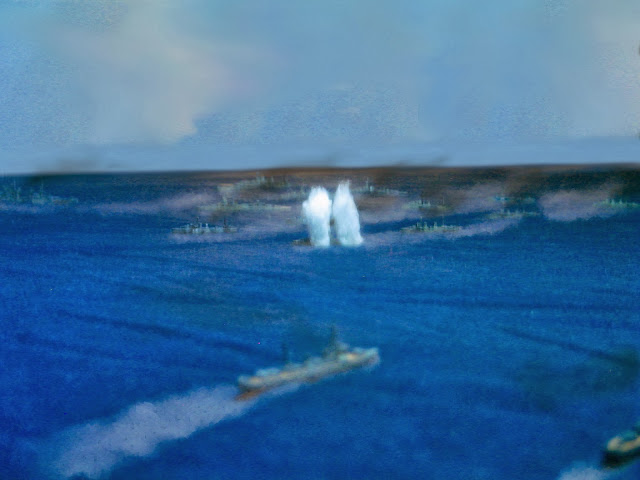 But it wasn't long before a flurry of British Quick Firing rifles sent Samidare to join Piet Hien. The battle slowly developed along this line. The ABDCOM force executed a simutaneous turn to starboard and away from the Japanese, making to run the east side of the strait in a slightly ragged right echelon. The Japanese destroyer force, in order to give chase, executed a simultaneous turn to port, leaving them in a fairly tidy line ahead.

The Japanese set a few torpedoes to 18 ft. and ran them under the destroyers and right at Tromp. Not only did the torpedoes open half a dozen compartments to the sea, the concussion wreaked havoc in engineering rupturing steam lines and salt water in one of the tanks put out fires in several boilers. Tromp immediately lost speed, dropping to about seven knots. Barely able to maneuver and with electrical failures disabling her A and B turrets she nevertheless bravely soldiered on as she trailed an oil slick and fired the occasional nuisance shot from her C turret at the column of Japanese death that now steamed quickly past her.

Meanwhile the Japanese battleships and cruisers turned hard to port to cut around the north side of the island in order to cut off any British stragglers that might clear the minefield.

The Dutch entered the minefield first, but De Ruyter was surprisingly lucky and struck only one mine, that detonated prematurely and did only very superficial damage. Prince of Wales was somewhat less fortunate, finding herself surrounded by waterspouts that holed her in the bow and on both beams. Her torpedo protection proved sufficient to prevent the worst of the mischief, but the damage slowed her down considerably. Best speed she was able to make was fifteen knots. Several destroyers cleared the minefield after her without striking anything. Java struck a mine, but again luck held and the damage was fairly superficial. Repulse struck several that slowed her down a bit between shock damage to her aging powerplant and increased drag from bent and torn hull plating, but her fighting ability was largely unharmed. Finally the last destroyer through the minefield, HMS Encounter, struck a mine which tore her in half. She sank with all hands in rather less than three minutes. Apparently the minefield wasn't completely toothless.

Still, this was unexpected. ABDCOM emerged into the north end of the strait largely intact, if two destroyers and a cruiser short. De Ruyter immediately called for flank speed while the remainder of the force screened her to keep the Japanese heavies at a distance. Admiral Sabryin, still coming about with his capital ships, met a particularly well timed torpedo volley from the gallant British and Dutch destroyers. Ise was struck first, losing all headway as the concussion apparently put out all her fires. She and Kirishima fired a volley at PoW that started a fire on the boat deck, but it was quickly extinguished. The two Japanese cruisers concentrated on Java, who was simply unable to withstand such a volume of fire. The first hit started fires in a berthing compartment forward, the following two penetrated into her engineering spaces, wrecking boilers in the forward fire room and leaving her dead in the water. With no power to counter-flood or operate pumps she took on water at an alarming rate and rolled over to port before plunging by the bow and taking most of her crew with her.

At this point a second volley of torpedoes caught Kirishima leaving her in straits quite similar to her squadron mate, if a few hundred yards closer to the enemy. With the two battlewagons dead in the water and afire the British heavies chose to shift their fire to the Japanese cruisers. The empire built her cruisers very well, but no cruiser of any nation could take the massive pounding that ten 14" and eight 15" Vickers rifles can dispense. Nachi fell first, wracked by massive explosions as PoW started fires from one end of the ship to the other and Repulse simply blew her bottoms out. Nachi survived slightly longer than Java, and she settled on an even keel, but the general effect was quite similar. 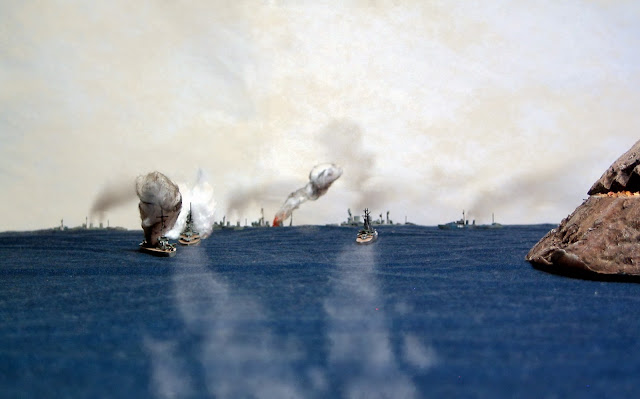 At this point we must speculate, because the hour had grown late and we needed to call the exercise. With no further torpedoes the British were probably out of miracles, and a squadron of Japanese destroyers was clawing up their wakes, but it's not unlikely that they could have finished at least one of the Japanese heavies before the Destroyers drove them off or sank them. The damage to the Japanese ships was more spectacular, but in reality all four battleships were serviceable once fires were extinguished and boiler pressure was restored. The biggest problem the Japanese faced was running down and stopping DeRuyter, who would probably have been more than capable of destroying the Imperial Army's still embarked supplies. 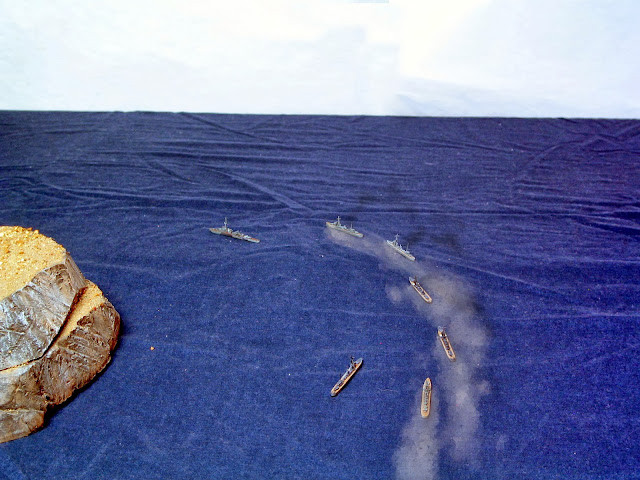 As to ship losses, I would guess that the British would have been best served by running. There wasn't much to be gained by staying in the fight. With all torpedoes expended and the bulk of the Japanese fleet still above water (and capable of firing both shells and 24" oxygen torpedoes) the British would have been hard pressed to finish the Japanese heavy ships before the destroyers caught up and put ABDCOM in a quite uncomfortable position. I'd guess that in reality all sides would have broken off action in order to regroup and lick their wounds.

In retrospect, I am not satisfied with the way I ran the minefield. I feel it was too weak and provided no credible disincentive to ABDCOM. (Not withstanding Admiral Kurtis's well known propensity to charge headfirst at any brick wall between him and dinner. And I wouldn't bet on the wall.) This left the Japanese commander in an unanticipated position, which was a little unfair since I gave the other side a more substantial force. The Empire of Japan would never have risked major fleet units so needlessly. But it was still a fun little scenario for all its flaws and it was nice to see some action on the masonite sea. With luck we can do this again sometime in the future. With real luck we can refight a substantial part of a longer campaign. Find out what might have happened if . . .

Until next time, gentle readers. May your lives be more gentle than our imaginations, but twice as fruitful.

Sincerely,
The Composer
Posted by The Composer at 9:17 PM 2 comments: