To continue the theme presented in Part I it's time to start talking about some smaller liners, merchies, tramps, and maybe even an auxiliary or two.

The very word "liner" tends to summon images of the QE-II and her ilk, but in the days when surface ships dominated the trans-oceanic passenger business the overwhelming bulk of "liners" were smaller ships, ships of closer to four thousand tons than forty. The big kids got all the press, but the little kids did all the work. While the crown gave Cunard a generous subsidy to build Queen Mary the majority of the merchant ships flying the British flag could count on no such benefit, and it might surprise the reader to learn that the average tonnage of British flagged merchant vessels, of which there were almost nine thousand excluding great lakes steamers, was about 2,300 tons. [Extrapolated from E. B. Talbot-Booth, Merchant Ships. (MacMillan, New York, 1942.) The add for Tremo Mouldings cast 1/1200 scale ships on p. 27 buried among adds for Hepolite marine piston rings and Harco mild steel cable plates is QUITE intriguing. It reads: "We are anxious to make contact with Importers in every market of the World, as although Metal Toys cannot be exported at present - they may soon!" Even in wartime there are gamers and collectors.]

Anyway, I digress. "Liners" were, of course, always a little larger than your average merchant vessel, but the grand dames of the major European lines were in no way typical. Initially, if I understand these things correctly, liner simply meant "ship belonging to a shipping line." It came to also carry the addendum "and traveling on a fixed steaming schedule between regularly scheduled ports." In the popular imagination I suspect this came to mean "large fast passenger vessels" but so far as I can tell the latter was never an industry definition, while the former more or less was. Most liners of the WWII era seem to be vessels of around five thousand tons with larger/newer/faster ones sometimes ranging as high as ten or even fifteen thousand tons, but rarely if ever more without substantial government subsidy. (And with naval conscription often predicated on these subsidies. Witness NYK's Izumo Maru and her sister Kashiwara Maru.)

NYK's 1923 Hakusan Maru seems altogether more typical, and it is she that GHQ has chosen to depict. 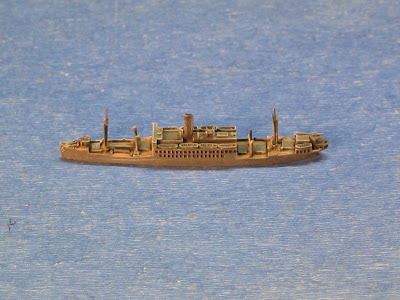 While this ship suffers less exaggeration than many GHQ offerings, the masts provided have the usual problems. The majority of them were bent beyond recognition in the box and they're so very delicate that even if straightened they wouldn't last through a game. To add a little further injury they're also incorrect. My advice: throw them out and start over. It works better that way. Styrene stock will give you more control and better results. It takes CA+ better than the pewter, it's easier to trim accurately, and it's straighter and rounder. Modern pewter castings are nice for many things, but long slender objects aren't on that list.

The Viking Forge/Seabattle model below depicts HMS Rawlpindi; another typical midsize liner, in this case a P&O passenger steamer, taken over by the Royal Navy as an armed merchant cruiser. 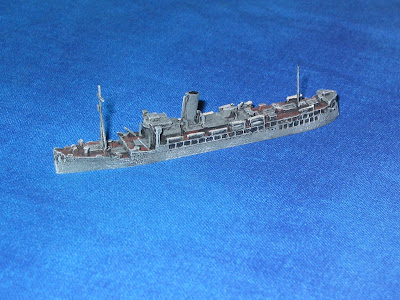 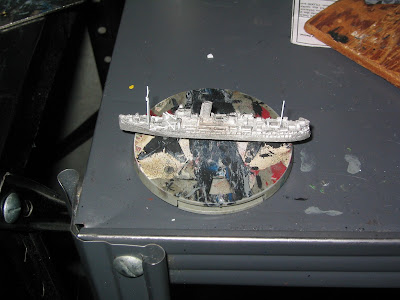 Seabattle chose to model the ship in her civilian garb, so I spent a little time militarizing her. The two pictures  give you an idea of what I did: adding eight six-inch rifles in single mountings scattered around the ship, removing one funnel (I can only speculate as to why the RN did so, but the preponderance of the evidence seems to suggest that they did), and adding the usual masts. Out of the box this ship could make a quite lovely liner. Conversion to armed merchant service involved a little more work, but since she was a famous victim of two very famous raiders I felt obliged. 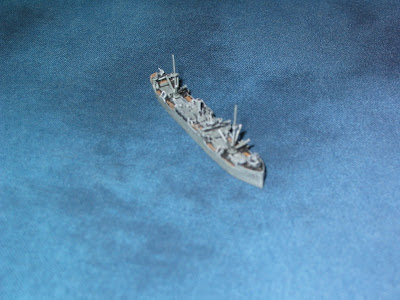 This very lovely little ship was a "Hog Islander" launched in 1919 that served throughout WWII. Like Queen Elizabeth discussed in the last chapter, this is a single piece casting. No masts were provided, though the rafts rigged to the side of the ship are a quite nice touch.  In general, this is a very nice casting of a quite  ubiquitous class of ship. These were, in many ways, the precursors of the ever-present Liberty Ship and I'm glad that Viking Forge and Seabattle make one available.

One of the other things that pleases me about my Seabattles acquisitions: I often have quite a bit of difficulty tracking down the specific prototypes for "typical" merchants, which makes it harder for me to decide what ship I wish to depict. (I strive for accuracy wherever possible.) Models with names like "Typical Maru Transport" and "Tramp Steamer" don't help, but quite often even "named" ships turn out to be very difficult to pinpoint, and I'm amassing a fairly large personal library of period ship lists and have access to google. I've rarely had that problem with Seabattle. Of all the major manufacturers, they seem to provide the broadest and best documented  catalog of merchants, auxiliaries, and minor combatants. If you want to do convoy gaming in 1/2400 they're a supplier you should be familiar with. (Even if you order from Viking Forge, finding a Seabattle catalog is invaluable, since it makes the prototypes clearer.) 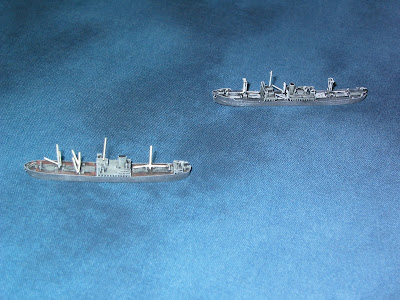 MV Gran is a case in point of the problem I detailed above. I can find no record of a ship matching this description. I have no idea what ship served as the prototype. It's not in E. B. Talbot-Booth. It's not in Jordan's The World's Merchant Fleets: 1939. I can't find it with Google. In short, I have no reason to believe there ever was such a ship. As far as I can tell it's a fantasy, albeit one that looks relatively typical of British merchant steamers. (Which I suppose does make it a little easier for me to build and paint, since I can just make it up.) Again, the masts provided with these two ships were more or less useless and were all summarily discarded. (All were bent in the brand new sealed box. Most were asymmetrical. Sadly, I've come to believe that this is the rule and not the exception.)

I don't mean to seem as though I hate GHQ. I've enjoyed building some of their models and their detail parts are invaluable, but I've found their merchant ships somewhat disappointing so far. Perhaps I am unjustly holding them to a higher standard, but they do cost half as much again as most of the competition. If you're going to charge a premium price you should provide a premium product. Or if you want it another way:
GHQ, find a way to make some merchant masts of comparable quality to your IJN tripods. They should be straight, symmetrical, and durable. If you can't do that in pewter you might consider casting them in styrene. Other miniatures gaming companies that don't even bear mention have figured out how to package models with parts in different materials. Snap to it kids. You can do better. I'm confident of it.

Next time: the long delayed 2012 Fleet Review.
Posted by The Composer at 8:07 PM