Liners, Merchies, and Logistics: Part I

While there have been some exceptions, like a few Japanese heavies of one sort or another, I've spent the bulk of my modeling effort this winter on minor combatants, minor powers, and merchant ships. Today I'll recapitulate some of what I've learned about the dizzying array of merchant vessels and their derivatives available to the 1/2400th modeler.

I've mentioned before that I'm a little bit more of a modeler than I am a wargamer and as such I confess that I have an interest in things that will, in all probability, never face the dice of my fellow gamers. I like merchant ships for many reasons, sometimes because of their functional elegance, sometimes their efficiency, often their colorful variety, and in a few cases I can't help but be impressed by their sheer bravura size. These last are most often the great liners. The biggest and sexiest never saw a lick of combat during WWII, spending the war in yoeman service ferrying troops back and forth between assorted ports of call in the New World and the Old. Their smaller brethren, which I have also modeled, often faced far greater hardship. Let's start with the "super-bigs."

Virtually everyone in the West is familiar with one particular budget super-liner (I say budget since niceties like a double bottom and full-height water-tight compartments were apparently scrapped on the drawing board to save a few ponies) that managed to get tangled up with some solidified water on her maiden voyage. Everyone knows about her sheer awe-inspiring swaggering mass, her virtually immutable stature. Less attention is paid to her comparably sized and sometimes larger sisters and cousins, since they didn't leave the party during the first dance. But geeky gear-headed types often like them. To some, names like Leviathan, or Rex summon images of gigantic whales or kingly dinosaurs, but geeks of my particular bent might think of preposterously oversized collections of steam and steel. Like all things writ grand few of these ever really made simple economic sense. Many were grandiose political statements, not unlike some Battleships we love, but usually (ahem, usually) without the comparably exaggerated casualty statistics

My first super-liner in miniature was a Panzerschiffe model of Olympic. I won't detail her here beyond saying that she sat lonely for a long time, singularly the largest ship in my collection, forever needing an update but with no particular reason to give her one. No longer. Perhaps a year ago an acquaintance of mine offered me a copy GHQ's Queen Mary at a post collision discount. Some work was required to straighten the bow and reconstruct the fo'c'sle, and to build more prototypical masts, but after some time in drydock . . . God Save the (wartime grey) Queen! 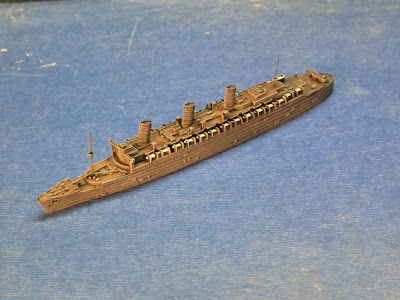 It's pretty, but I truly think GHQ overdid it with their usual detail exaggeration this time. I understand, I do. I exaggerate all kinds of things myself, even on models, but this has an almost fantasy feel to it. At the three dollar price I paid I think it's a remarkably good deal, but at full retail I can't recommend it. It's a difficult model to assemble, GHQ stock masts are virtually always badly bent and equally frequently incorrect, and it's just remarkably expensive for what it is. I'm glad to have it, but I probably wouldn't recommend it.

Of course Queen Mary had an even larger half sister Queen Elizabeth: 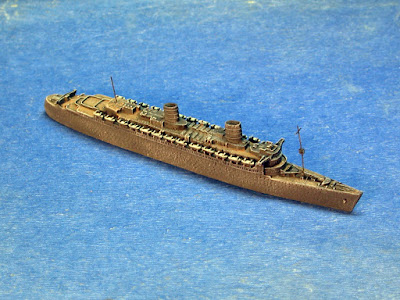 Last fall I broke down and ordered some Seabattles castings from Viking Forge. Reviews on the net suggest that they're not as crisp as the Seabattles originals, that they're less detailed, or ill formed. At table distance I actually think they look better than GHQ and they're certainly simpler for the inexperienced modeler. This casting required no assembly and only minimal cleaning. I added the masts, since it came with none, but I see no advantage to badly mauled and universally fragile incorrect masts over no masts at all. Ironically, the cost is identical to the GHQ offering, but I walked away somewhat more happy. I will say that not everyone will feel the same way: there's a little more flash to clean, the casting really isn't as "crisp" out of the box, and it looks less detailed out of the box, but I think it paints up better and looks somewhat better and I very much suspect it will wear better. Perhaps more relevantly, they have the model in their line and no one else does. In fact, they have quite a few liners and while none are cheap, the less luxurious liners have comparatively more pedestrian prices.

But I like the large and extravagant, so I also ordered RMS Aquitania

and the lovely French liner Normandie. 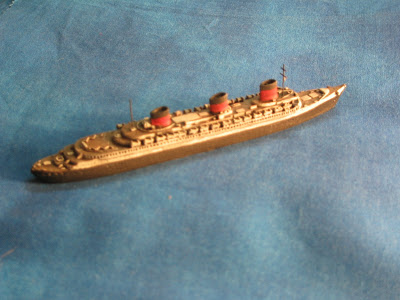 In the end I hemmed and hawed about how to paint each of these. Normandie was easier, since she was lost during conversion. The Cunarders would surely look more lovely in proper black and white, but Aquitania is actually cast with AA armament and I didn't wish to demilitarize her and as she went, so too must the two Queens.

As noted above the great liners led pretty uneventful careers during World War II. In Liners, Merchies, and Logistics: Part II I discuss some of the smaller liners and merchies I bought around the same time, many of which faced more risk and suffered worse fates.
Posted by The Composer at 8:11 PM