I've always liked frogs. I haven't always liked Slann. That probably changed about the same time that they disappeared from the official 40K story. I'd say this is sour grapes, but I've been slow to warm to virtually everything GW almost from day one. When my adolescent friends bought their first beakies I hated 'em. Probably took me a few months before I decided I needed my own. Couldn't stand the exageration of the Imperial humans, the grotesque distortion of chaos, the foppy hats of the elves . . . the only units I liked from the get-go were probably the old Imperial Army and the sacred dwarves in space. Some things I learned to appreciate timely. Others I did not. So let's say that my interest in Slann was untimely. They're out there, but they're devilishly hard to find unless you want to mortgage an organ or two. Thus far I've bought . . . one. And I probably overpaid for that.
So where does that leave us? Proxies. Or sculpting. Or a combination of the two. I've gone for the last. While 40K Slann are tough to come by, there are other other anthropomorphic frogs out there. Fantasy frogmen seem to have been rather popular in a way that frogs in space never were. Citadel made quite a lot and may still make some in fantasy plastics, Reaper makes at least a few, and Grenadier made some at the very least. There were doubtless others. (Maybe RP made some, or Rafm.) I chose to start with the Grenadier sculpts. An Italian company called Mirliton Miniatures has them as a part of their Lost Lizardmen range and I found them at a reasonable-ish price.

There were four miniatures in the pack in three poses: two different spearmen and two copies of a swordsman. I started with the spearman who was holding his spear upright. I decided I'd make him a standard bearer and to that end cut off the top half of his spear and replaced it with a banner pole fabricated from styrene. Of course, what to use as a space slann banner was something of a problem. The space slann draw heavily on Meso-American art, so that seemed a logical place to turn. Genuine Aztec standards appear to have been a carved staff with some dangly bits at the end, perhaps feathers. I decided I'd go with a sort of shield hanging from a stick approach. I don't know that this is terribly authentic, but it's at least in keeping with the style and these are slann, not Aztecs, so they needn't be precisely the same. Next to the frogman you can see my first crude attempt at a shield curing on the benchtop. 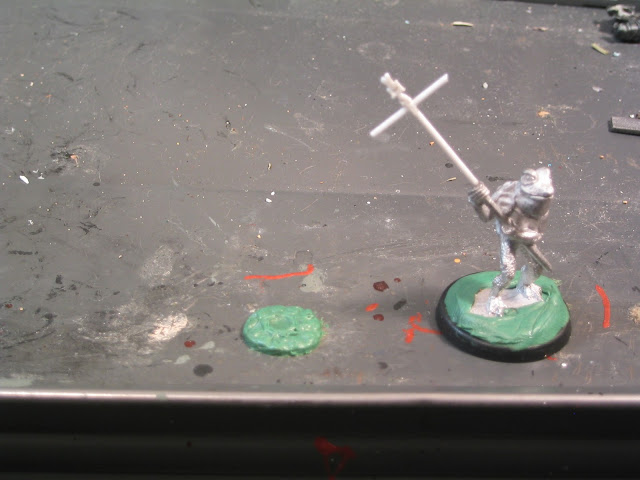 The second attempt was a marked improvement, but still not quite where I wanted it. You can see some clear common elements between the two: both have a row of small circular detail around the rim of the shield, surrounding a row of interlace patterns I took from a Quetzalcoatl relief. Both also have a space in the middle. I had a vague idea that perhaps I could fill the space, but it also seemed possible that the shield could be a sun symbol needing no center detail. 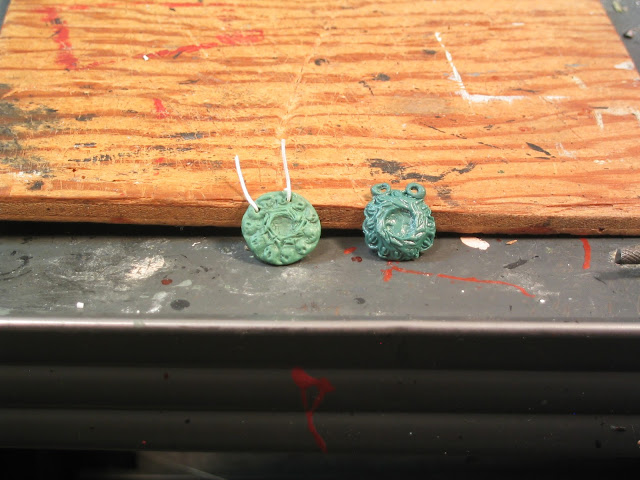 One small flash of insight I had while making these was the realization that things out of scale often look quite different. My WWII naval readers will know that I squash cast small repeated details. I decided that a quick way to busy the shields up was with medium AA molds. They leave the gun surrounded by flash, which builds into a large circular ridge at the edges. To make the molds I press a ball of green stuff (kneadtite) onto the end of a stick, wet it, and push it down onto the master. Even the best sculpted 1/2400 AA guns are really just vague linear shapes. You wouldn't recognize them as guns if you didn't know that's what they were in the first place. Given all of that, if you leave them surrounded by flash they look more like flower petals than guns. (Albeit flower petals with little lines in the middle.) Bingo! That's a detail I can use.

In addition to the shield, I also wanted some small items to hang at the ends of the cross arms. I used debris I had sitting about for one of them (another low relief 1/2400 AA gun) but I wanted feathers. These I sculpted from still more green stuff. For the more detailed feather I actually did both sides separately. After the first dried I flipped it, added more green stuff, and sculpted the back. I'm still learning the ways of keadtite, so this is just starter grade stuff, but for a first ever feather I'm fairly pleased. 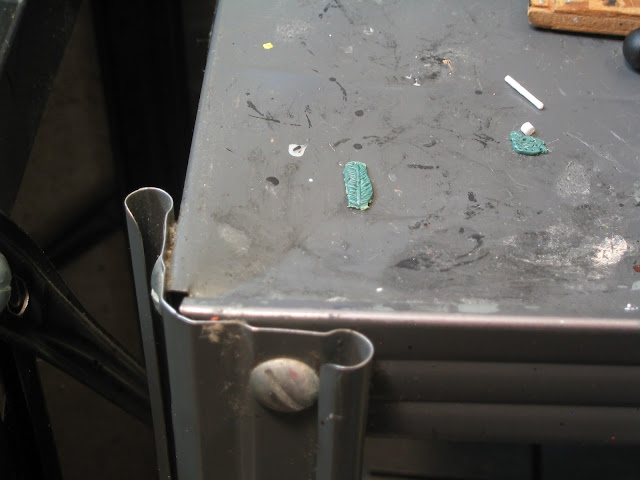 To the right and above the feather, just below two pieces of sprue that are about to become a replacement gun for a space monkey, you can see a low relief Aztec jaguar head. That was my next step. It was too big to fit in my second shield, so I had to make yet another. Below is my third, and hopefully final attempt curing on the marble where I created it. One more innovation was adding the chain BEFORE letting it cure. Not sure why I didn't think of that earlier. 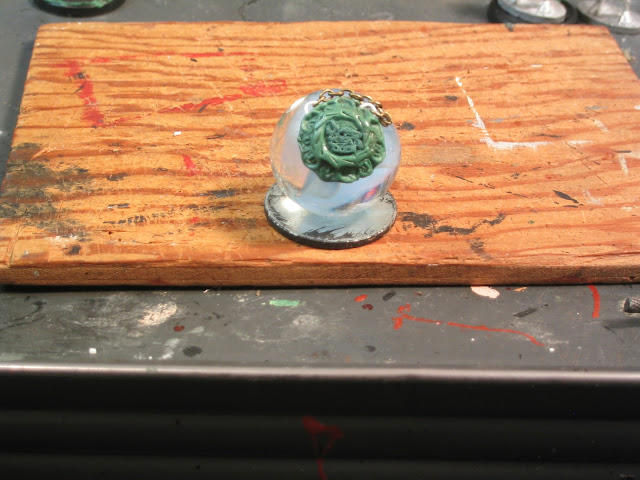 While frog one's details were curing I set about making frog two. The first step was removing his right arm, which was quickly accomplished by nibbling it off with diagonal cutters. Second was adding a helmet. I found a lovely piece of suggestive debris (actually bottom part of the yoke from a 1/48 WWII bomber) and incorporated it as a crest. I then fashioned a new pommel for the sword. (Well, refashioned. I did the pommel first, but kept messing it up while I did the helm, so I just pulled it off and redid it after.) Finally, I glued in wire to serve as an armature for the missing limb. 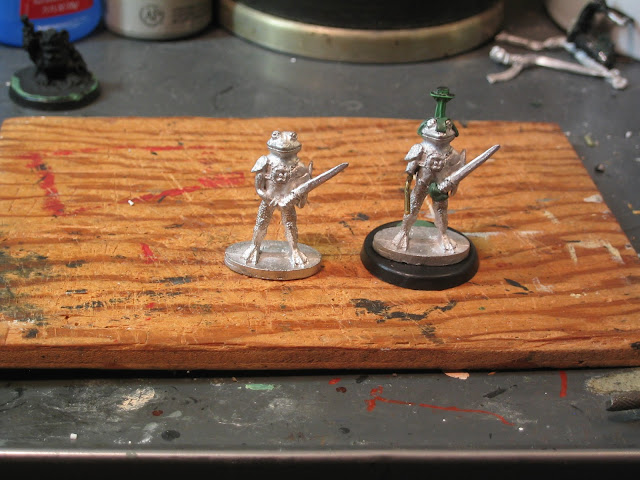 That accomplished, I glued the cured details to frog one's  flagpole. 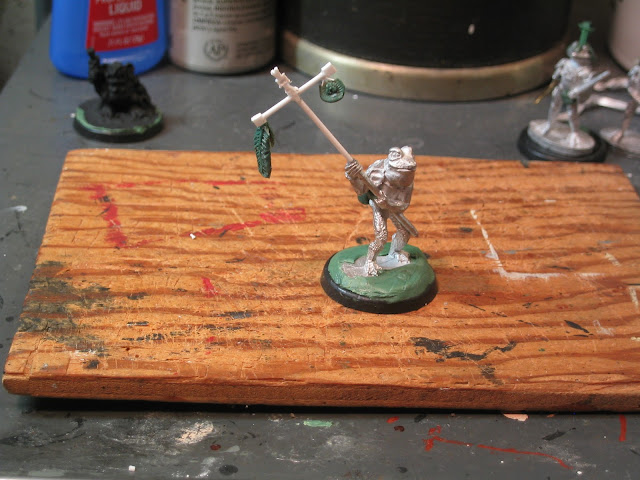 Of course no space frog warrior is complete without a weapon. Our standard bearer has his holstered behind him. The gun is a collection of debris from 1/2400 modeling, sprue, and kneadtite. For fun and practice I also gave him a belt and a pack. It lends just that much more of an oldhammer feel. 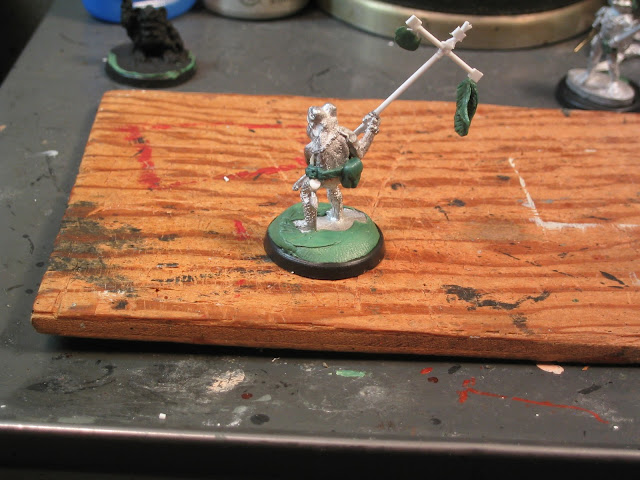 And there he stands for present. Hopefully by the end of the afternoon he'll be enough cured I can add the shield and begin painting. Check back. And thanks for joining me.

Note: To see the outcome of this project, please take a peek at Slan Craft II.
Posted by The Composer at 3:51 PM