Madmen of the Moab Wastes

The growing story of Moab III has been begging for more characters. Today I bring you the first of several spaceport dicks, a pair of mad wastelanders, Kitty Luong's new beau, and a frog in space. Let's start with the spaceport dick and the mad hermits . . . 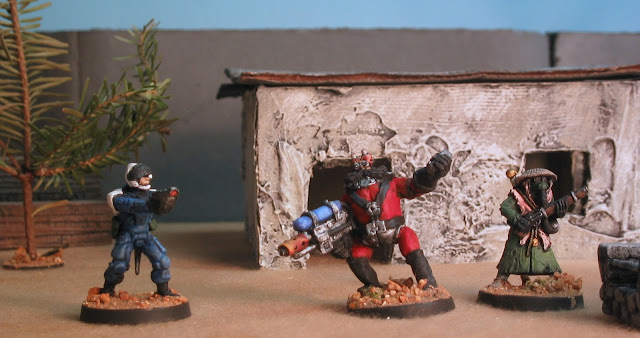 I first discussed Ramshackle miniatures last year. The fellow in the high tech red onesie comes from their metal range of post-nuclear survivors. Like everything from Ramshackle he's heavy on both the mass and the character. Like an old Bob Olley sculpt he's exaggerated in a way that almost seems cartoonish, or more accurately comic-bookish, but just believable and dark enough to make him really stinking interesting. Why is this crazy dude running around in space pyjamas anyway? Is he a miner who's had a little too much moonshine? (Awfully big gun for such an occasion.) Is that the world's tightest vac-suit? Is he mad genius or just mad? You have to paint him up to decide. I like that in a miniature.

The two fellows with him are from different EM4 ranges. The gent in blue is one of their plastic troopers and the fellow in green one of their metal scavengers. I particularly like the scavenger. But reviews later. First some size comparisons . . . 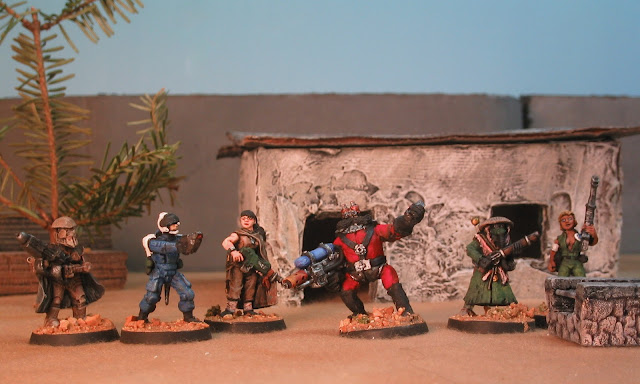 In this third shot I've included some Citadel miniatures of different ages for scale. On the outside are two older Rogue Trader era adventurers, one smallish and the other more typical. In the center is a smallish late edition Imperial Guard. The EM4 miniatures size up well enough while being a bit more delicate. The Ramshackle fellow is large even by recent Citadel standards. The scavenger is incredibly detailed and very cleanly cast. If there's any drawback at all it's that the amount of detail work for such a tiny miniature is really quite high. Keep your triple 0 dotter handy. The Ramshackle survivor, by comparison, is surprisingly plain at first glance. For a figure of his bulk, he's actually more subtle than you would expect. 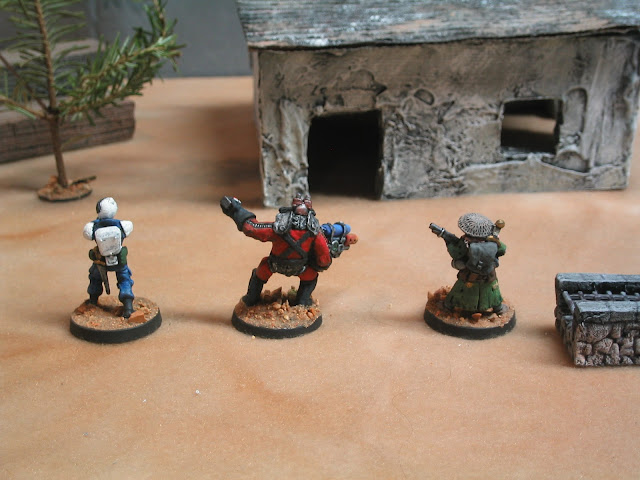 The one disappointing note in the group comes from the plastic trooper. I bought these fellows to play the role of the local law, as inspired by Cheetor's campaign. (And not having the luck or budget to come into old Citadel Paranoia miniatures, though I'd love to have 'em if someone feels like sending a late Christmas present.) The EM4 troopers seemed like a perfect fit, and the price was terrific. They're intended to be SWAT style cops in the slum of the future. However in retrospect I think they might be a little more game marker and less miniature. Don't get me wrong, they're great for what they are, but as models they leave just a bit to be desired.

I suspect EM4 was aiming at a relatively young audience. The miniatures are cast from a hard styrene plastic that would be much more familiar to aircraft and automobile modelers. Unlike the better vehicle kits, but quite akin to starter types, they are snap-fit, requiring no glue. The torso is cast in two pieces, front and back. The arms are cast together and sandwich into a slot. The head is integral to the torso front and the legs to the rear. The backpack is a fourth and final piece. Styrene plastic is typically injection molded into steel forms, which I believe is the case here. This means you can't have any negative space. (Relative to the mold, anyway.) The typical modeler solution to this is to cast lots and lots of parts, which isn't so young kid friendly. To keep them simple many sacrifices in detail were required and snap-fit leads to some large and unattractive gaps that need filling. 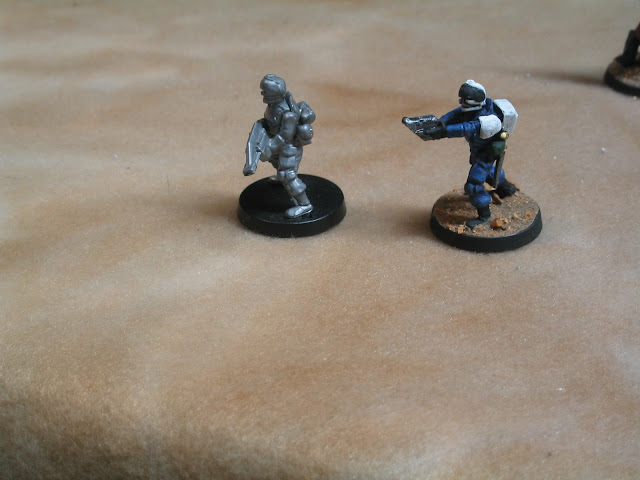 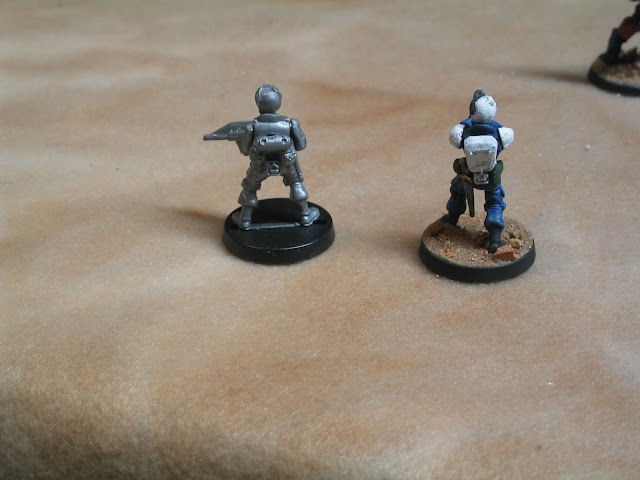 In fact, I was quite unable to fill the shoulder gap in a convincing way, so I sculpted some crude shoulder pads and moved on. I suppose for the price, less than a dollar a figure, they're not too bad. They should serve as useful starting points for later conversions. And EM4 is kind enough to sell some very nice conversion parts I will try out shortly. So with that one minor hiccup I'd still say I'm fairly pleased with EM4. The metal is splendid and the prices are great.

Below them are a miniature many will recognize as a space slann, an EM4 rebel I've nicknamed Blake Walker, and Kitty Lee whom you have met before. Believe it or not I didn't set out to match Kitty and Blake, but they did rather come out that way, which only seems appropriate as they two met on an FTLnet dating service a few years back and are now happily and productively involved. They make a cute couple, don't they? 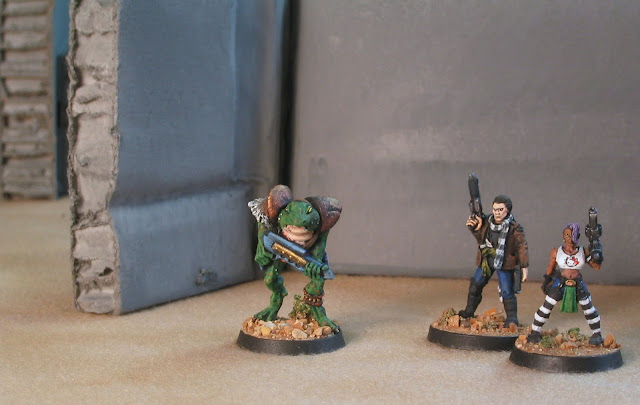 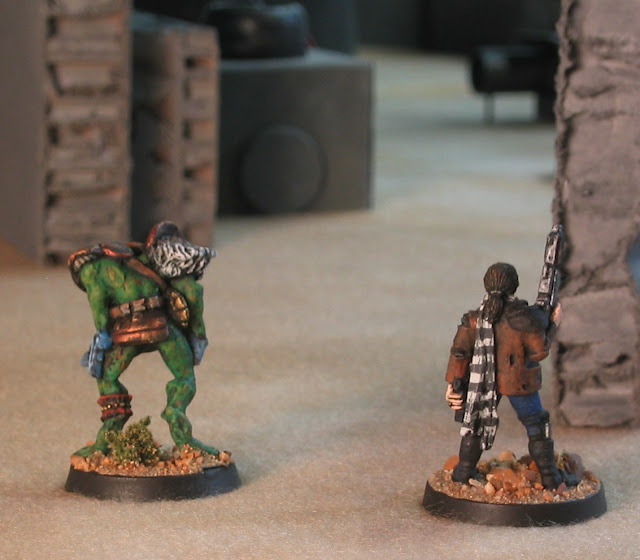 Not unlike the pairing of the mad hermits, Blake and the frog, whom I shall call Constantine (the world's most dangerous frog) since my wife asked me if he was a Muppet, are a study in contrasts. The old Citadel sculpt is large and fairly simple with lots of relatively blank surfaces. In spite of this it has enormous character. The EM4 miniature is both much busier and daintier. (If you can safely call a man with three guns, a boot knife, and a dangerous attitude dainty.) Painting Blake was something of a technical challenge, since there's so much stuff squeezed together. There are both mechanical issues in painting such fine detail and artistic ones in making it all stand out. The frog, by contrast required considerable inventiveness and creativity. There's an enormous amount of exposed skin and some of the details are less than clear. 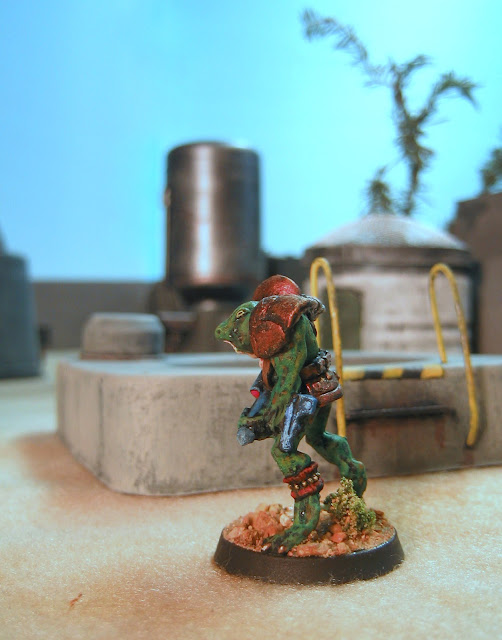 It's not incredibly obvious anymore, but half hidden below a layer of heavy yellow highlights you might just be able to make out a brown mottled pattern. I made a stab at trying to make him look like a real frog, or more accurately toad. His coloration is meant to approximate a red spotted toad. I painted black spots and short stripes all over him and then added a reddish brown above that. I then highlighted the whole thing with a dark golden yellow to blend it all together and make the pattern more subtle. I think maybe it made it too subtle, but live and learn. And either way, I'm pleased enough with the effect.

Also for the record, the three miniatures at the beginning were the last of 2014 and the last two are the first of 2015, so Happy New Year all, and happy painting.