At the Century Mark: Taking Stock of the Leadpile

For those who keep track of such things, this is my hundredth post. I've had a couple things banging about for a little while, as I've finished some small terrain pieces and there's a pair of miniatures awaiting formal introduction to the world, but neither of these seems quite grand enough for the occasion. With apologies to Mr. Murray over at The Leadpile, which blog's brilliant name I am appropriating for this post, I decided to take a dive into my own model mountain.

All this began with a rather mundane trade request on the Oldhammer forums. Mr. Papafakis needed an orc hand and I have more than I'll likely use in a lifetime. 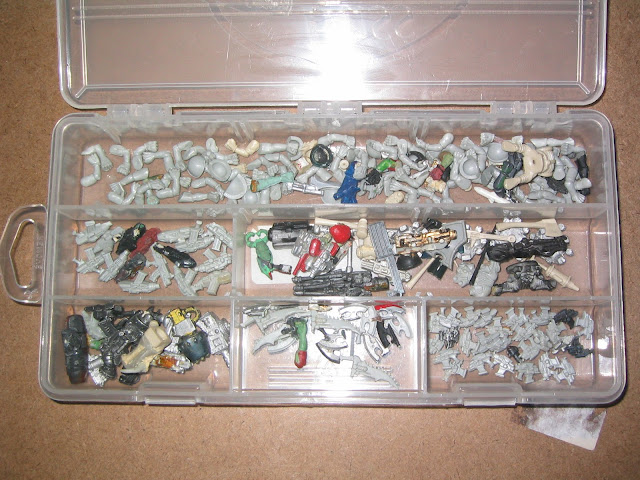 Asslessman, of Leadplague, beat me to the punch and he's probably closer to this particular modeling emergency so I'll let him handle it and wait for one in my own hemisphere. But in the middle of this Papafakis mentioned digging through his "leadpile" and Asslessman showed a little teaser picture of his workbench. You know the sort, where you're talking about working on one thing but there lurking in the background is this other thing with an equally interesting story all its own. Maybe something like this . . . 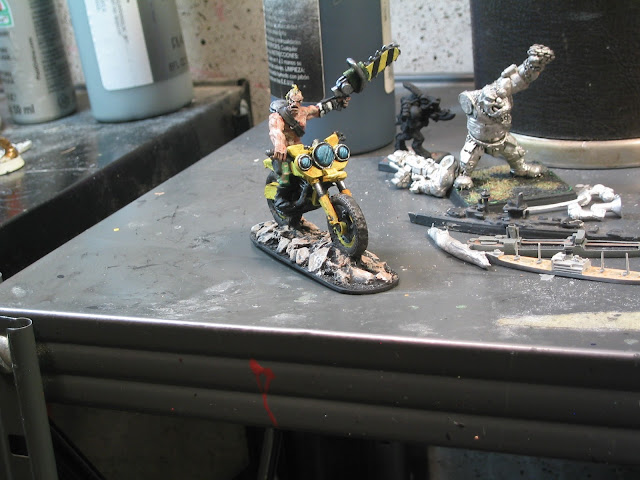 I usually try to crop down to what I'm writing about for the sake of focus . . . 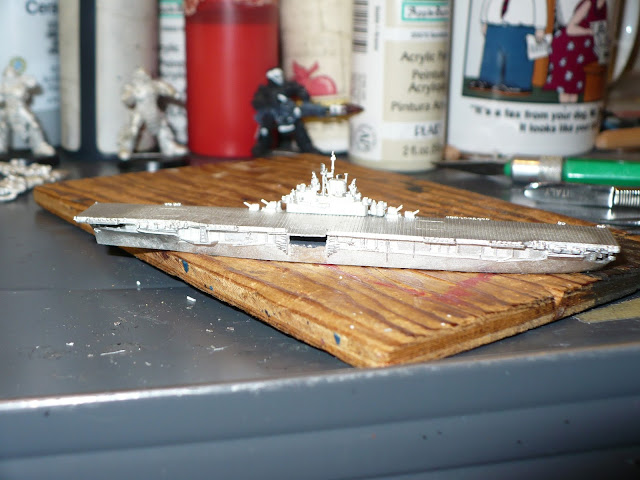 . . . but I've probably been guilty of the same thing from time to time. It's almost inevitable, really, since our workspaces tend to be at least a little cluttered with several projects competing for time and attention.

Anyway, this hint of Asslessman's painting cue left me thinking that I'm long overdue for a decent consideration of the not in commission part of my own collection and maybe a little reorganization. (Only a very little. Don't get all worked up. I didn't want to be at it all week, but it's good to see what you've got and make sure you know where stuff is from time to time.)

So, without further ado, here's my 28mm "leadpile."

Or at least most of it. (Every time I thought I had it I remembered more miniatures in another corner. I eventually gave up, figuring whatever was missing from the group shot was minor and could be added later to the "closeups.") That's only the 28ish mm stuff. It includes none of the bits or materials, no smaller scales, and none of the related hobbies that lack war, gaming, or both. I know this isn't the largest pile out there, but it's still impressive when you spread it all out. Lots of dusty and lots of old.

To get a better handle on things I've sorted it somewhat approximately by "army" or "collection." Let's work backwards from most recent to oldest. 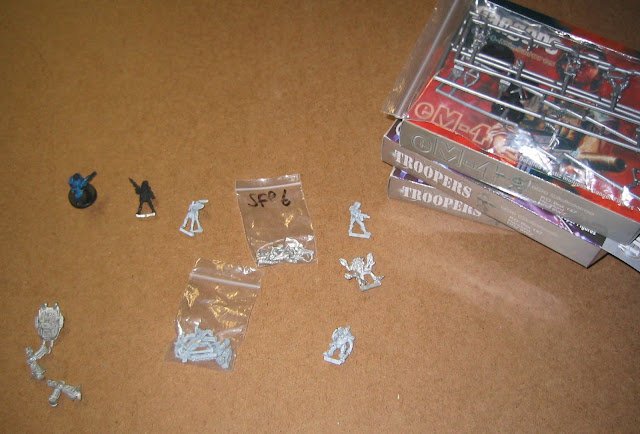 (With one odd lot included that apparently isn't the mech I thought it was but probably also isn't EM4.) That's 19 typical miniatures and one largish one. No big deal.

Next up we have a small but growing collection of unpainted Ramshackle. 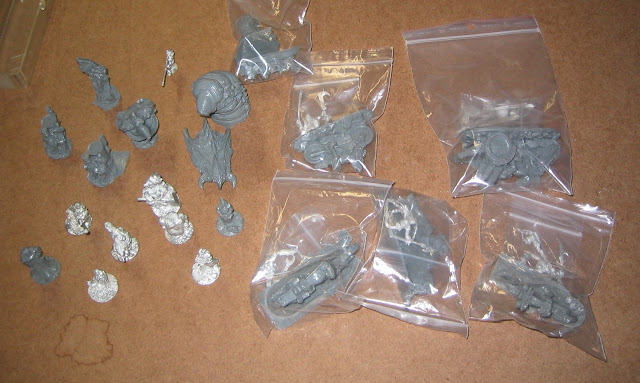 8 large castings and 13 normal ones bringing us to 32 regular and 9 large.

Add to that an assortment of Spacelords, two "Slann" to be, some missed Ramshackle monkeys, and a group of miniatures I . . . uh . . . well, I don't show those to my wife. 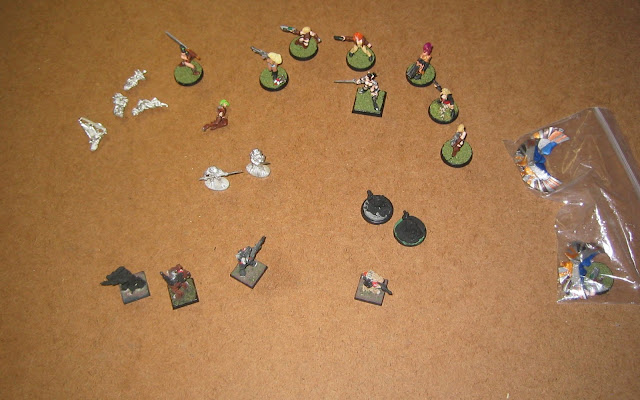 Not even absolutely clear where they all came from. (Well, e-bay, but not sure who made them.) That's 21 more for running totals of 51 regular, 2 small, and 9 large.

To this we can add some random Citadel imperials, pirates, adventurers, and oddities. 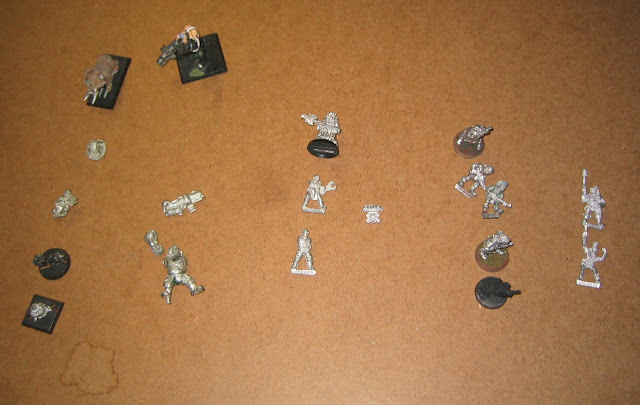 I'm tempted to skip robo-bacon, since he's technically a "vehicle" for another miniature, but when we get that far this count will have become silly, so let's count him for now. 10 regular, 2 large, 4 small, and one mount for 63-11-6-1 (RLSM). That's getting to be enough to keep one painting for a while. 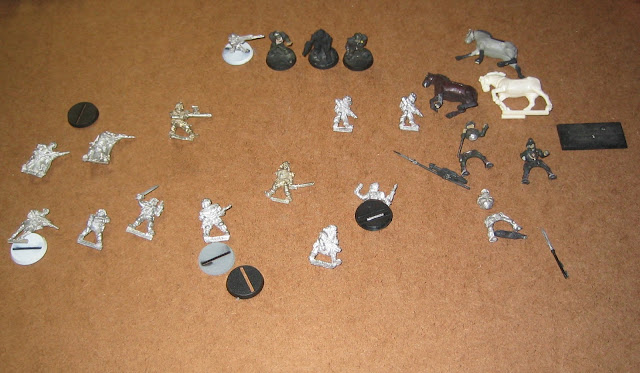 The bulk of my guard I bought recently, but you can see some "brutal childhood paintjobs of the '80s" there. (These are, incidentally, the first wearing my own paint on this list, though they will be FAR from the last.) So that's 15 regulars, 3 larges (R+M=L, right?) and one midget for 78-14-7-1.

Now we're starting to get into acquisitions that might even be two years old (which is good): genestealers . . .

That's 40ish with ten or so slated for deaccession. (That's a fancy museum term for "sale or trade.") Still, at present that leaves us in the neighborhood of 149-15-7-1. That's more significant digits than we're entitled to, but we'll round off at the end of the show.

At this point we move out of the modern era and back into childhood or at least early adulthood. Five dragon kings (to the tune of the twelve days of Christmas) . . . 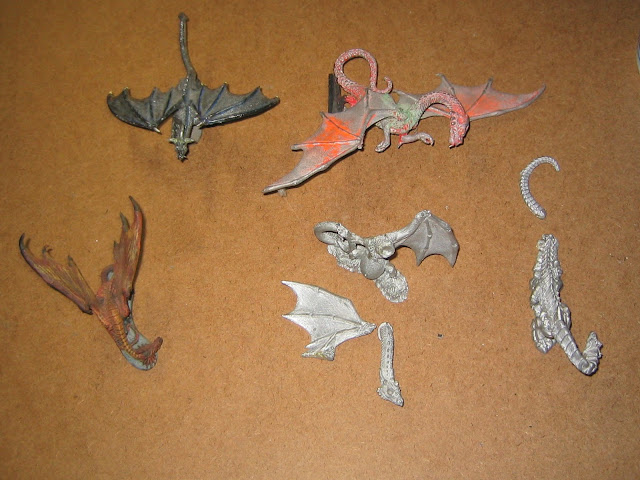 About the same time I started buying dragons I also bought into Necromunda. 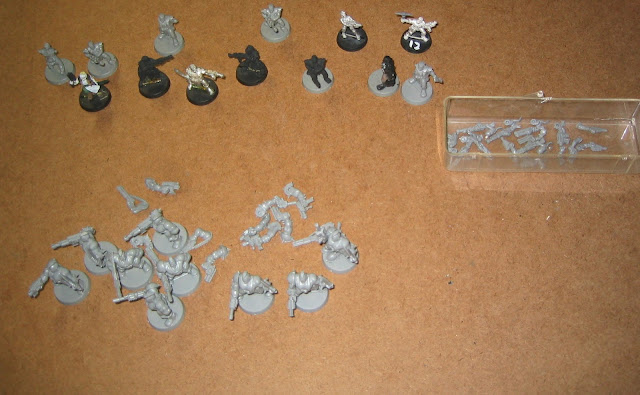 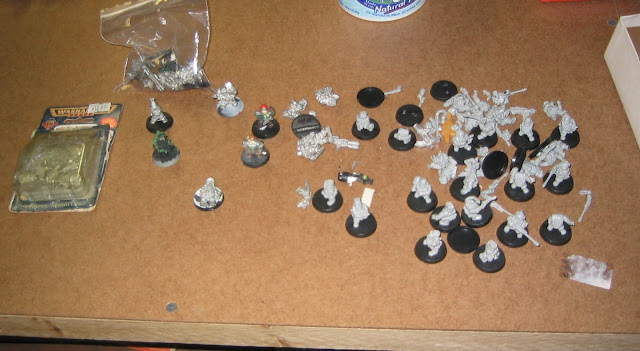 I'd estimate there are about 45 stunties there with maybe five in the discard pile. We'll count the bike with ancestor sidecar (how is that not painted yet?) as one large for 215-21-7-1. (Calling squats "regular" might be somewhat controversial, but they're close enough to be the same amount of work. Really so was the ratling earlier, but we'll call him small as he's special.)

And this is where we stretch the ability to estimate from pictures . . . 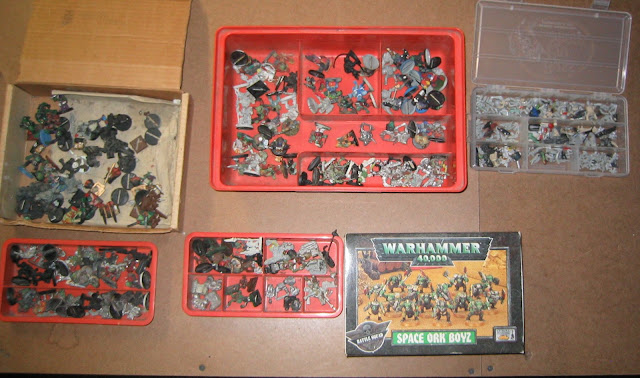 Let's call it 120 orks, a dozen snots and grots, and a half dozen bikes. Oh, and assorted parts. (The modern "ork" models belong to this category and not in the totals, I think. They were a gift from a friend.) So wow, that made a difference. 335-27-19-1 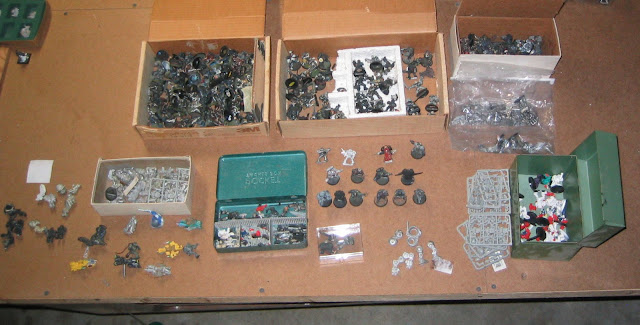 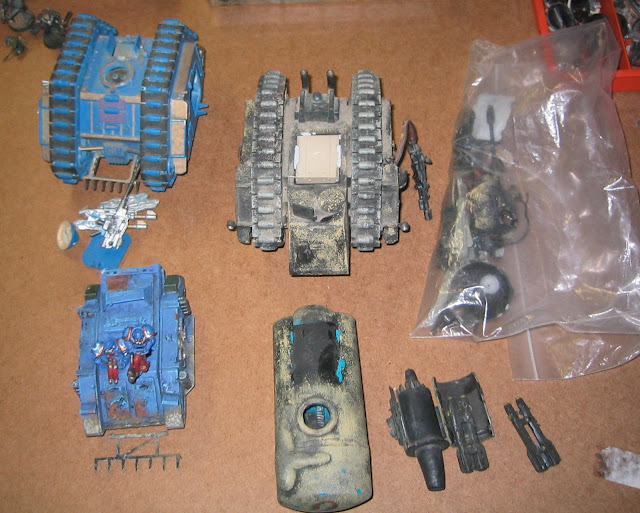 Yeah, I quit counting now. Let's just say lots and call it a day. Gard, but there's several dozen TERMINATORS in that box. I have a companies worth of brutal childhood termies. Ahyup. Now, to be completely fair the brutal childhood paint isn't all my own, but most of it (the dark stuff in particular) is. I don't really know precisely what's there. Maybe a hundred beakies, fifty lead marines (most actually lead even), a solid few dozen terminators (no kidding, I loved the things), five old jetbikes (one with rider), a "new" one (with rider), a dreadnought, two land speeders (with crew), four vehicles (old spice counts, right?), a half dzen wolves, and lots of parts. That's where I really ought to make a deaccession list, but I haven't yet. So lets say that's 180-5-6-4 grand totaling (to one significant digit) the 28mil sci-fi out at 500-30-30-5-4 (LRSMV). Or a really grand total of nigh on 600 things to paint. Yowza!

Mind you, I started with D&D (of course) so last but not least are the TRULY brutal paintjobs. 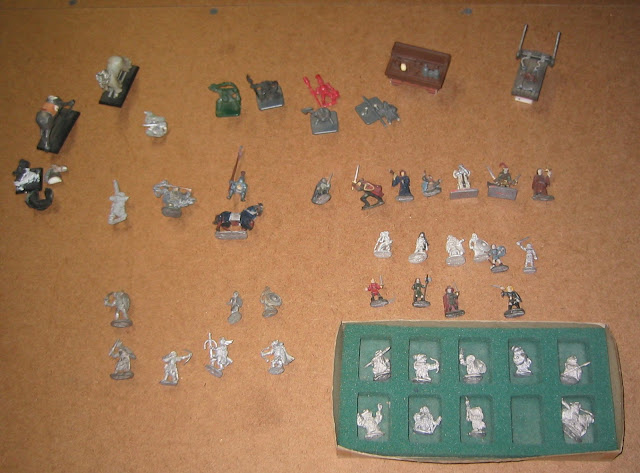 And I failed to include my 25mm Medievals, which really ought to be there, since there's a fair bit of 25mil in the dungeon crawl mix. But hey, who's counting?

To finish this odd quest, here's a few shots of my painting and gaming territory. 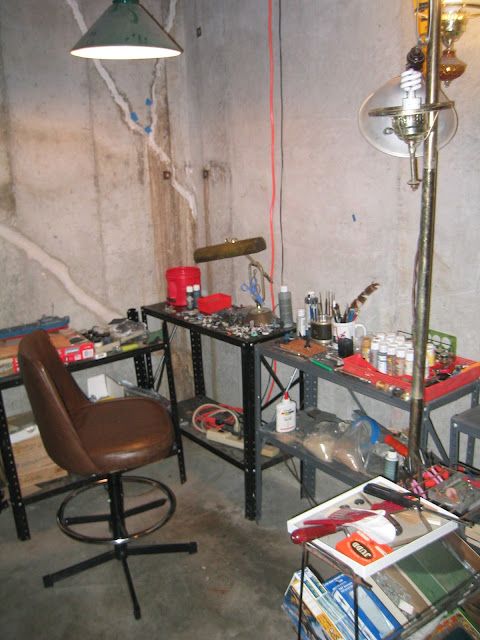 The pile in it's natural habitat. 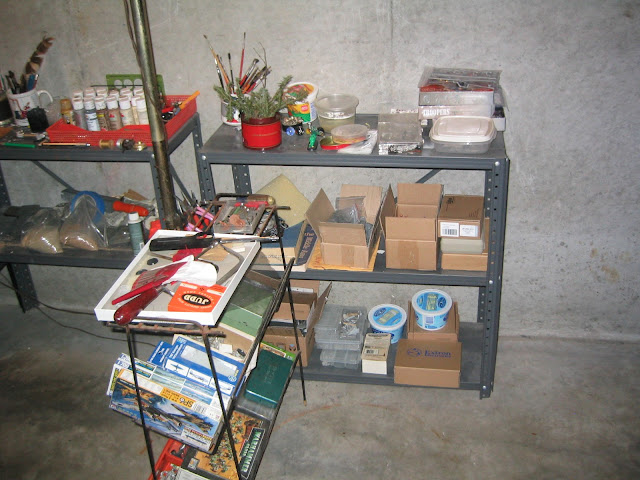 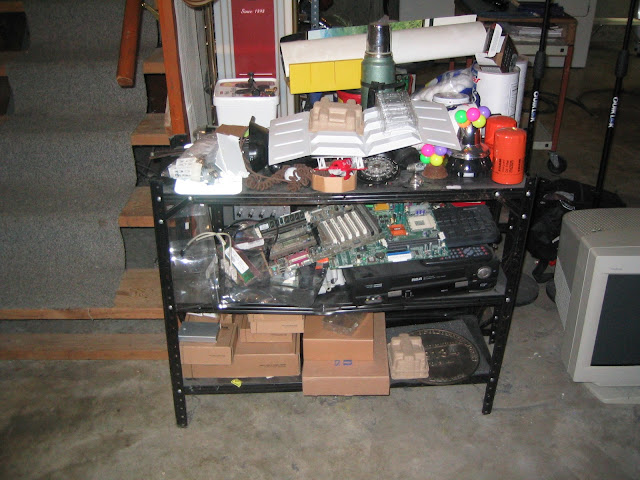 And a place to call home. 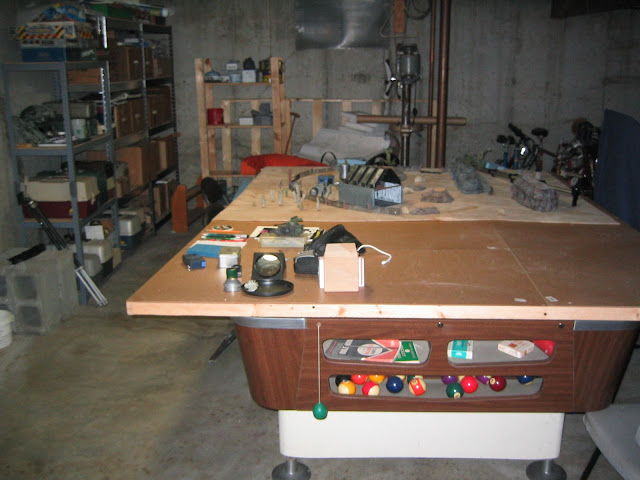 (Which is where I keep and store most of the models actually wearing paint.)

Thanks for coming with me. I hope you'll come along for another century of modeling, music, and mystery. (I'll keep the music to a minimum.)