A few more conversions of models from Panzerschiffe and Viking Forge.

To start, the Germans.

These two are 1936A type destroyers marketed by Panzerschiffe as "Narvik" class. The trouble is that it seems completely random which class of German destroyers I get when I order them. Thankfully they're similar enough one can be turned into the other. Of course, the type varied considerably in armament and outfit, so conversion would be needed anyway. Z30, for instance, initially had only one 5.9" gun forward, and alone of all her sisters she had catwalks over the torpedoes. Z31 was more typical. 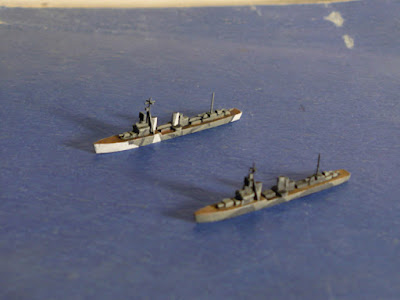 Shelesien was a particularly fun conversion. Panzerschiffe sells her in her WWI fit, so I had to essentially recreate the interwar overhaul trunking the two forward funnels together, removing casemate secondaries (and adding others), adding heavy boat cranes, and partially replacing the superstructure. In the end I'm pretty pleased with her. 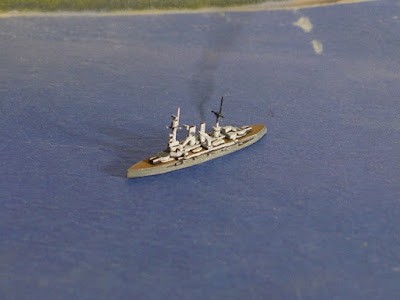 And what German fleet is complete without a selection of type VII U-boats? Watch out. Between them these three; U-99, U-48, and U-47; accounted for 116 merchant ships, a capital ship, a sloop, and 3 auxiliaries for a total of 582,803 Gross Register Tons. They also damaged 13 other ships and took a prize. (Pretty impressive.) 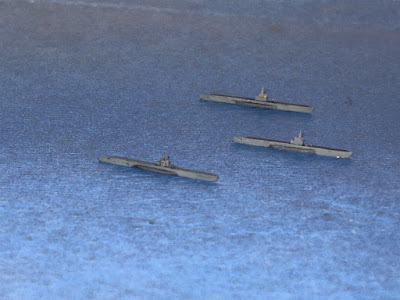 This is the other class Panzerschiffe sells. (Though only one of them actually started as a member of that class.) That said, they look fine when you change them around a bit. These three are Z5 Paul Jakobi, Z8 Bruno Heinemann, and Z7 Hermann Schoemann. 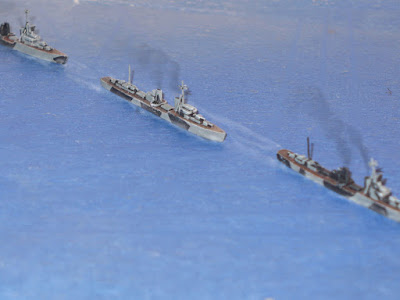 Finally, Viking Forge sells this tiny little ship as Ioshima, but I decided to build her as Ning Hai. This was another rather poorly cast ship (some voids, uneven guns) but I was happy to have her, as she's a bit of an oddity. And the basic outline is fair enough to let you make a reasonable approximation of the ship. For present, this "cruiser" is my entire Chinese navy. (I suppose she did have six 6" guns, which isn't too shabby. But with low speed, virtually no armor, and such a limited displacement I'd hate to take her into battle against a Fletcher class destroyer, let alone a real cruiser. Still, she'd probably have been a decent enough coastal patrol craft, which was no doubt her intended role. 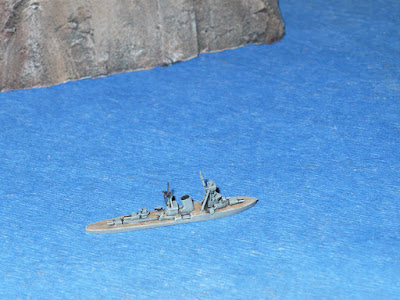 So anyway, there's a little bit of an update. We'll see if I can't be more regular about this in the future.