Following those orders I'd been meaning to cool it for a while. I'd already bought quite a lot that month. (Ah, good intentions!) But a gaming store in St. Louis was liquidating the stock of another store that had folded, and my oh my did they have some ships. At quite a discount. Even factoring in gas money (not insubstantial) I was still able to get things at prices I've never seen before and will probably never see again. And I bought fancier stuff, too. Some GHQ. A little C in C. Even some Superior and Viking Forge. The VF models were older and pretty basic, but the Superior ships were surprisingly nice.

So here we go. First, a few Brits:

Here's my rendition of Superior's Hood. 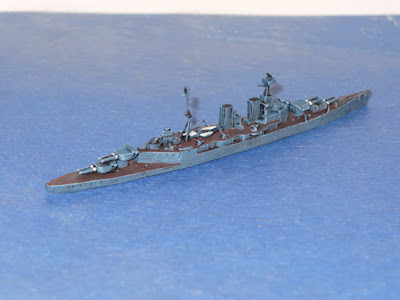 The bow and stern were a little bent, but they straightened out more or less adequately. All in all, I'd say it's a nice model. It's a very good compromise between the fiddly delicate detail of GHQ or C in C and the simple ruggedness of Panzerschiffe.

GHQ's Prince of Wales is rather a case in point. 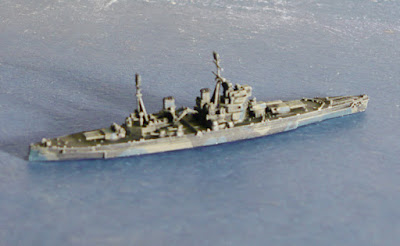 The ship is almost too busy to my eye, and the secondary armament is ludicrously delicate. The gun barrels were so badly bent I couldn't straighten enough of them, even with extras, and had to manufacture replacements for a few from sprue. (Which works fine. In the end I think the plastic actually makes better masts and gun barrels. And as a bonus it's much easier to work with.)

On the other hand, their "Illustrious" looks very nice. 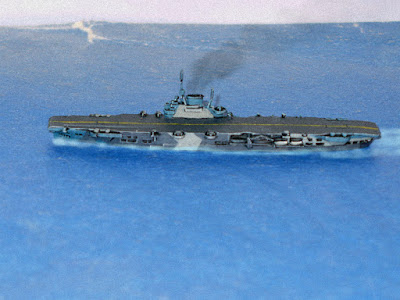 Not really quite like an Illustrious, strangely, but lovely. So I tinkered with it a bit and used it for Implacable. (For present I think I might well buy GHQ carriers and escorts, but I suspect I'll tend to stick to Superior and C in C for the cruisers and wagons.)

Their Essex is quite simply magnificent. 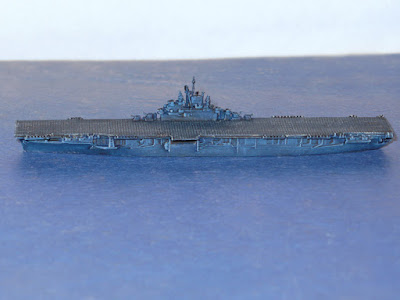 Unfortunately (or maybe fortunately, given PoW) this one was missing its 5"/38s, so I made them from stock. I also added the homing beacon, tinkered with the radar a little, and cut open the hanger.

This pair started out as Viking Forge's Vestal. 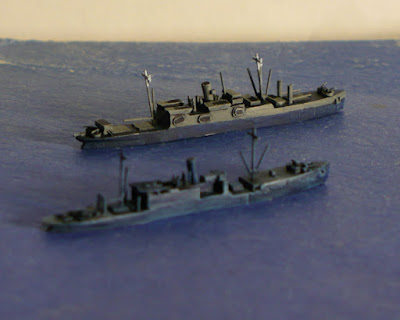 Their Vestal isn't a bad model, but it was in her fit from the 20s, so I stripped her more or less down to the hull and started over. I used the second one as USS Harry Lee, which was about the right size and shape. 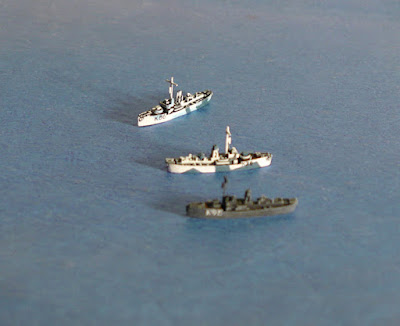 Their flowers are quite lovely. They're busy little ships, to be sure, and the mold was misaligned on at least one of them, but not so badly it couldn't be fixed. And of course, as always, I find you need to add the masts. (To my eye no ship looks right without them.) But once detailed and painted my heavens but aren't they pretty? I love tinkering, but I'd never in my wildest dreams be able to carve such a nice ship. These three approximate Dianthus, Clematis, and Asphodel.

Here's an interesting exercise in comparison. 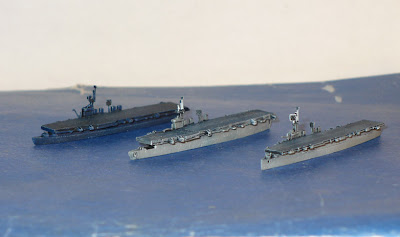 From left to right these represent Princeton, Belleau Wood, and San Jacinto. They also represent three different companies interpretations of an Independence class carrier. Again, from left to right: Panzerschiffe, Viking Forge, and C in C. The Viking Forge ship was a particularly rough casting requiring a lot of TLC. I added the 40s and truss masts to both the former ships. The VF offering also required me to remove some very poorly cast detail. (The gun tubs for the 40s were pretty misshapen, the "quad 40s" cast onto the bow and stern looked like, well, I don't really know what. Not like quad mounts, anyway.) All the C in C ship required was the radar fit. The tubs aren't arranged quite correctly for San Jacnito, at least, but it was otherwise pretty enough that I left it alone.

Which brings me back to a very nice Superior ship. Even though I've already got a pretty tolerable Soryu, I can rarely resist a carrier model. I figured I'd use this one to make an Unryu, which is about the same size as Soryu. (Not surprising, since they were a development of Hiryu, which was herself a modified Soryu.) I settled on Katsuragi. When you buy models at fire sale prices you take it for granted that pieces will be missing. This one had no island. Fortunately I had a spare Kaga island I could kidnap. (It's not quite right, but it will do.) Some hacking and slashing of gun tubs, a little green stuff, and some sprue later and I ended up with this . . . 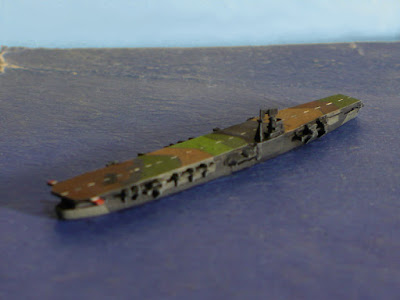 From meatballs back to pasta and another comparison . . .

(Yeah, I know. No Hinomaru to be seen. Still, it's the idea of the thing.)

Recall that I said the Superior battleships seem like the nicest ones to me. (So far anyway.) Well, that impression is partly from a very nice Littorio. Yes, the guns are a little oversized, but at 1:2400 that's not a bad thing. And casting the secondaries onto the deck is probably the right way to go. Anyway, what with such a lovely Littorio, my earlier Vittorio Veneto needed updating. Ive decided that I can, in fact, add anchors, breakwaters, and anchor chain. 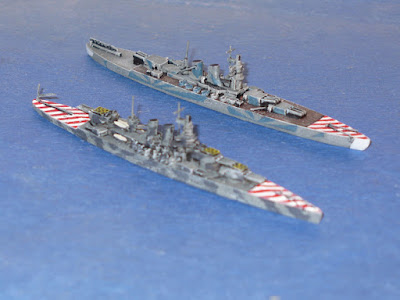 And last but not least in this section (II of III) is a small Italian seaplane tender named Giuseppe Miraglia. This is another Viking Forge offering given the once over. It was a clean enough model, but a little simple. And again, the fit wasn't quite right for WWII. So I spruced it up a bit. I'll try to go into more detail on some of the conversions at a later date, but here's the finished product: 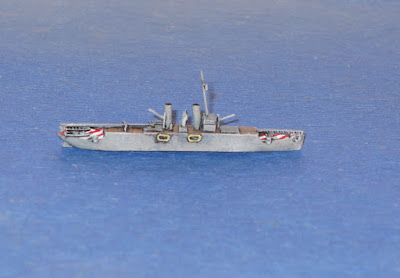 Concluded in Part III.
Posted by The Composer at 9:50 PM