Making Space for Adventure: Part I, Building "The Grid"

Last fall my friend Jay Bobson convinced me to go all in on a kickstarter for some laser cut terrain. I was a little skeptical at first, for reasons I'll get to, but I'm glad I did. Jay was really excited about modular set called The Grid from a company called Raybox Games. There's quite a lot of similar systems available in other formats. You can cast them up from hyrdrocal, print them on card stock, or even 3D print them from STL files. (As a native of St. Louis I have to love that file extension.) I expect there's even other lasercut MDF offerings out there. But I'd always figured I'd just do it myself with cardstock and patience. Thing is . . . I never got around to it. So I'm glad Jay talked me into it. Even if the kickstarter isn't precisely what I had in mind, it's the bones to something really nice. It gives me a place to start, and it really would serve the purpose as is, with a bit of paint, for quite a lot of gamers at a price that's not at all unreasonable. 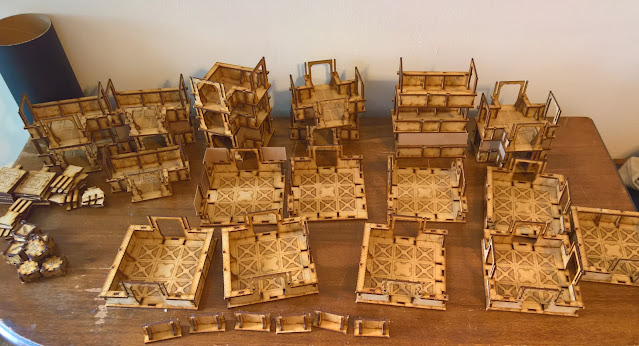 It's a pretty decent set: nine rooms and fifteen corridors of assorted shapes and sizes with sufficient doors and connectors to make it all work. And a few barricades and boxes as scatter terrain. You can punch them out of the cards and build them up with more or less no tools or glue required, though tools make the process easier and the fits better, and glue makes the final product more solid. 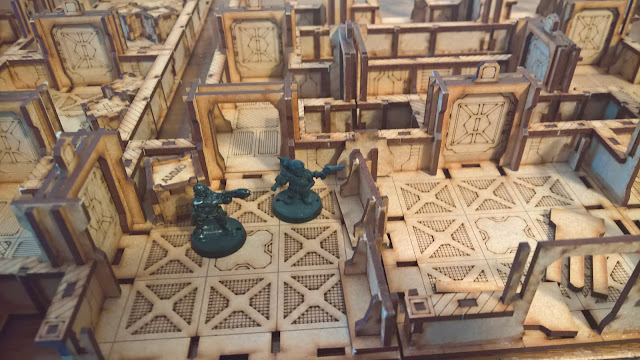 And you know what? That's fine. You can play a game with that. But it's not me. I want a little more in my table. Paint is an obvious start, but there's something just a tad dissatisfying to me about this . . . 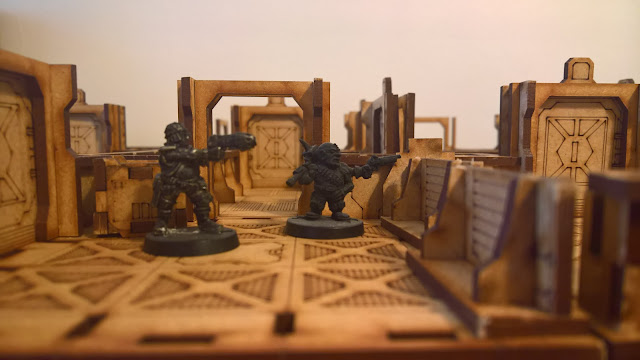 That's right ladies and gents: it has half-height walls. Which they regard as a selling point, oddly. Maybe some folks like the greater easer of reaching across the walls to move their miniatures, but to me half-height walls aren't really that much more convincing than no-height walls. My tiny little actors (who are still very much in need of makeup) are obviously on a set no matter what angle you choose. Not only is the fourth wall broken . . . they're all broken. There's a floor and some somewhat practical doorways, but that's it. Not much more than the set to Rosalie Wildest's Our Station. I hope you like post-modernist theatre! (Oh, fine. I do. Honest. I swear. I actually do.)
Wait, this is a game you say? What? Nonsense! It's a story. And stories need proper sets! 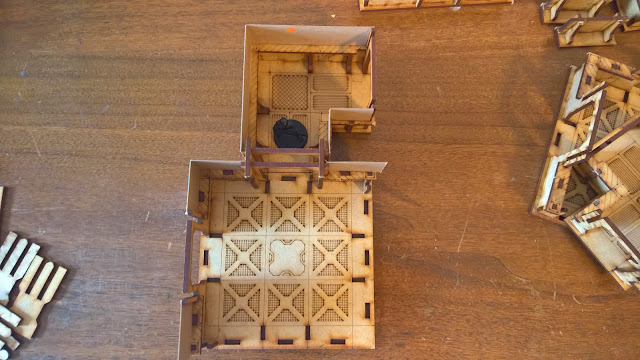 So I began by adding simple cardstock constructions to complete the walls. And even without lighting, costumes, makeup, props, set dressing, or even paint I find the effect greatly improved. Not only can our tiny actors figure out their blocking, but the lighting designer and game-a-tographer can better see the sight lines and understand their roles. 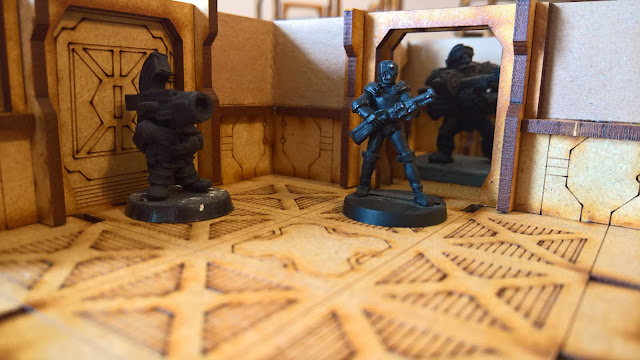 The next step is to begin to dress the emerging set: make it look lived in. Add some gee-gaws and gribblies; a cable here and a letterbox there. 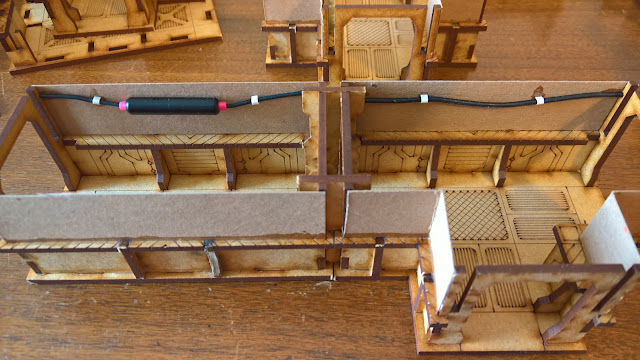 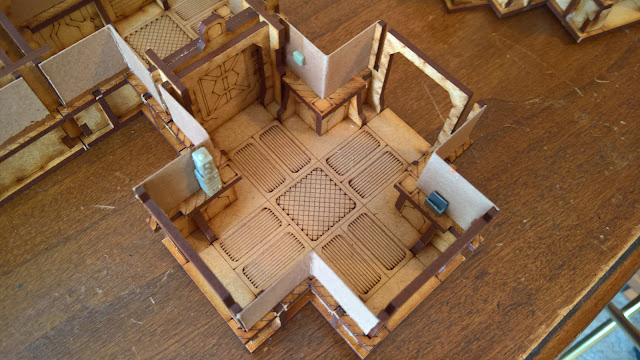 For this I took a dive into my bits box, of course. A growing array of broken headsets supply plenty of cable and interesting little cylindrical attachments that could be a communications junction, a power relay, or a CO2 scrubber. Curtis Fell of Ramshackle Games kindly provides an endless supply of extra bits with his shipments: structural elements and extra weapons or tools, for instance. Off cuts of sprue can provide quite interesting shapes to serve as buttons, speakers, or even a letterbox. (I think that was actually a leftover bit from a B-17 dorsal turret, but don't quote me on that.) And with that extra bit of detail I think we're really beginning to get somewhere! I can imagine our heroes exploring some mysterious space station, or derelict hulk floating forlorn in the void. 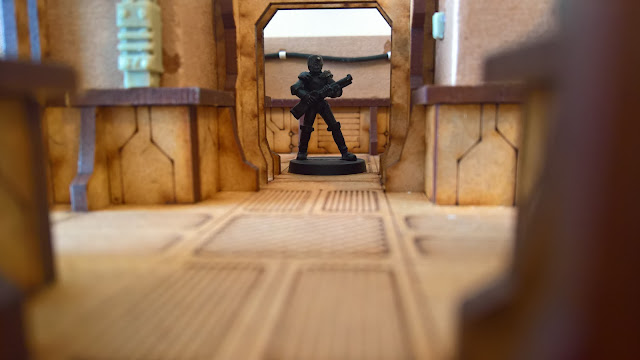 And that most important of all shots, the Kubrickian corridor shot, actually looks like a corridor. (Especially when you improvise a ceiling by stacking other tiles on top.) 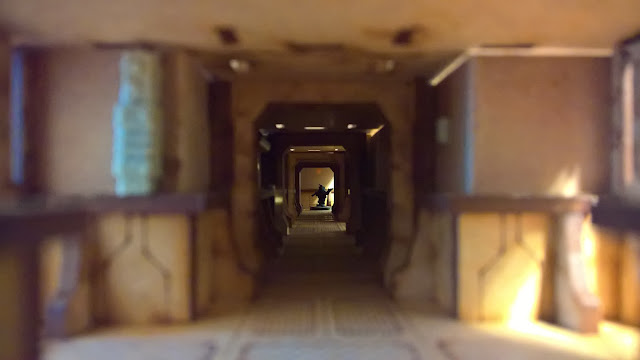 This project obviously has a way to go yet, but I think it might be enough for a multi part series showing some "work in progress." I'll keep you posted as I get further in. As always, thanks for joining in on the ride.
Sincerely,
The Composer
Posted by The Composer at 11:30 PM