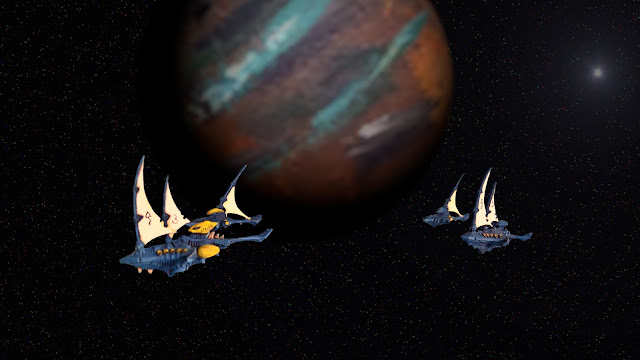 The Tahtien Ihmiset, sometimes called the space elves, or simply the elves, pointies, or even poncies, thanks to the rather stiff and formal demeanor of their representatives among humans, are among the older space faring civilizations. Human contact has often been fraught, but the Tartarans seem to have struck some kind of peace with one or more of the Tahti tribes, so we will attempt to describe their capabilities to the extent we know them. Most are fairly similar, differing primarily in size. Their largest vessels, so vast they are sometimes called world craft, are comparable in size to all but the largest human sprawl cities. But their warships tend to range from galleon to roughly great galleon size. Most are powered by great photon collectors, sometimes incorrectly called sails. Their technology seems otherwise mostly comparable to Terran equipment, albeit generally lighter and quite finely crafted. Their primary weapons seem to be beam batteries of more or less standard capacities. They are also known to have torpedoes of different sorts, though their precise nature is unknown as so few of their ships have been captured intact, and none of the larger types. They have generally shown a preference for avoiding direct engagement save in those few cases where they appeared to be defending a site of some spiritual or religious importance to them, where they have proven devastatingly effective fighters.

Mass: about 70 KTons
Armament: numerous beam batteries approximately equal to B and lesser classes, possibly torpedoes
Protection: energy screens and possibly armor
Powerplant: 3-4TG of impulse acceleration
To call the Red Bees a class is a bit of a misnomer. Each ship's hull is built up in a manner closely approximating organic growth from an exceptionally durable material the elves are thought to find in warpspace itself. Their ships have proven to be fast, though their exact performance has ever been measured as none have been captured intact to date. 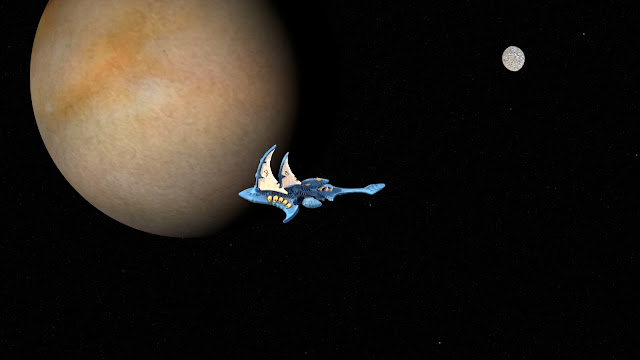 The Starwinds are generally similar to the Red Bees, save for their smaller size. 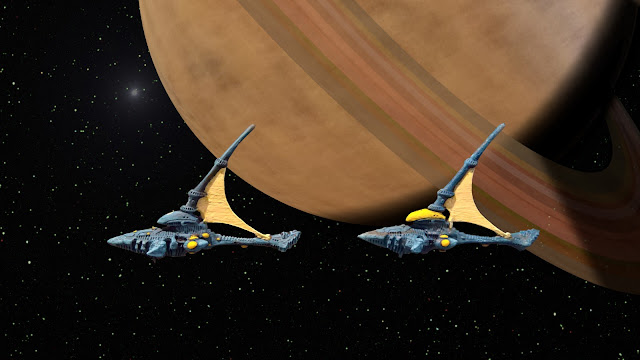 At least one squat freehold is known to inhabit the general area of the Tartarus Rim: that of the Burkhan Kaldun guild. Like most dwarven guilds their technical skill is quite advanced and their ships should be assumed to be very capable, roughly equivalent to the best Terran classes.

The Chinghis Khagan is an exceptionally large warship from what we can estimate. As such it probably isn't terribly fast, but it ought to be remarkably survivable, particularly if it is screened, as dwarven technology would suggest. There are rumors of larger and experimental weapons coming from nearby systems, and it's certainly large enough to carry even something as cumbersome as the fusion bombard, though there is no external evidence of such a weapon. The weapons appear to be mounted primarily in broadsides, but this is simply an analysis of photographic data.

The Uriankhai class follows similar lines to the Chinghis Khagan, but on a much smaller scale, being quite small for a galleon. Photography suggests it has some kind of axially mounted weapon, but its precise nature isn't known.

The Slepnirs are the smallest dwarven warships encountered so far. It seems quite likely that they will be faster. No visual evidence can be found of anything beyond beam weapons, but this shouldn't be taken as definitive. 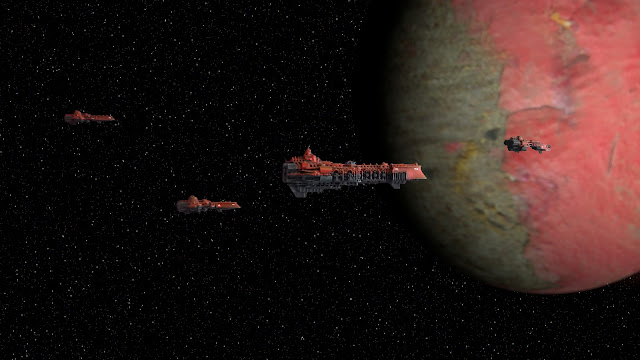 For the sake of completeness we're endeavoring to present several typical examples of merchant ships. This list is not remotely exhaustive, but the ships discussed represent some of the most common types.

The Deuterium Pressing Company of Proserpine is probably the largest gas mining concern in the Rim territories. They operate a fleet of fairly standard meta-stable metalized gas tankers to service their gas platforms. DePCoPro 2, seen below, is a fairly typical example. She has a registered mass of 84 KTons and can sustain 1TG of impulse for short periods. 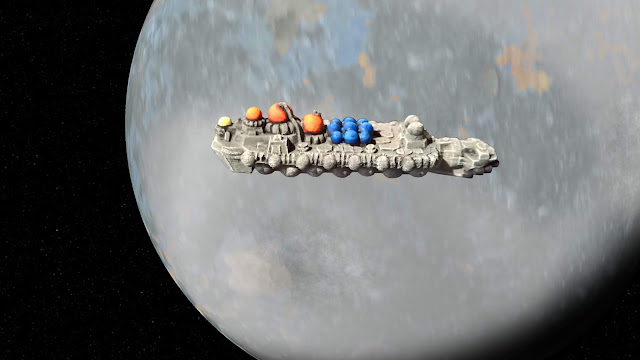 Small passenger liners are a more common sight along the north rim than in the more developed core and southern worlds closer to Terra. The example seen here RACT Enhance of the Rex-Avis Clan Line, is a fairly representative. She is registered to carry five hundred four passengers with a crew of fifty six on a mass of 41 KT. Because her design was sponsored by the territorial guard she can manage 4TG of acceleration, but would rarely if ever do so with passengers aboard. Such liners can also carry a considerable amount of mail and finished goods in their cargo holds. 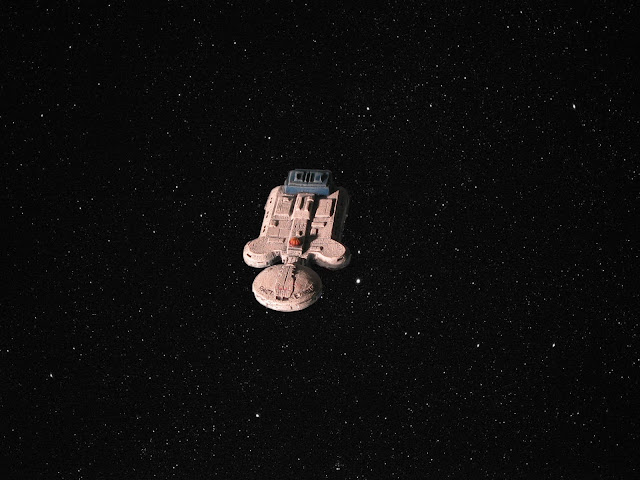 Tramp spacers make up the bulk of the commercial tonnage along the rim, and come in an array of shapes and sizes, ranging from 10KT or less up to about 30KT. Most aren't terribly fast, managing perhaps 2TG of acceleration at best, and usually less. They carry every conceivable cargo, but particularly supplies and equipment for more isolated ports that the major lines don't serve regularly. 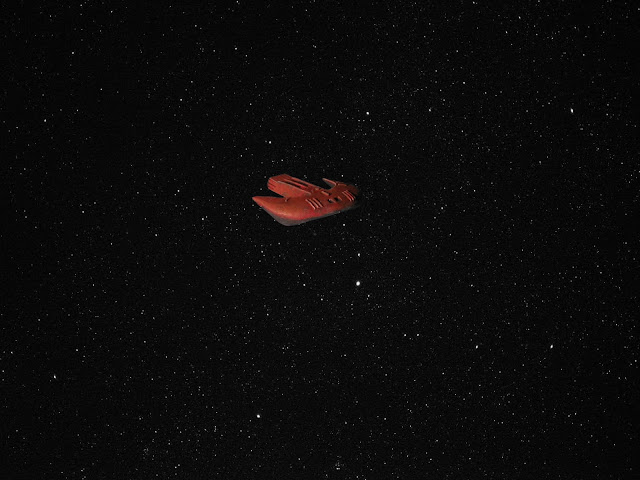 A number of different sorts of tenders and auxiliaries circulate the spacelanes of the northern galactic rim. Seen below is a deep-space buoy tender that has been converted to serve as a warpspace weather research vessel. Ships of the sort will generally have one or more shuttles and small boats they can launch and considerable stores for long missions. They're not usually more than about 30KT, and are frequently lighter. They rarely posses more than 2TG of acceleration. 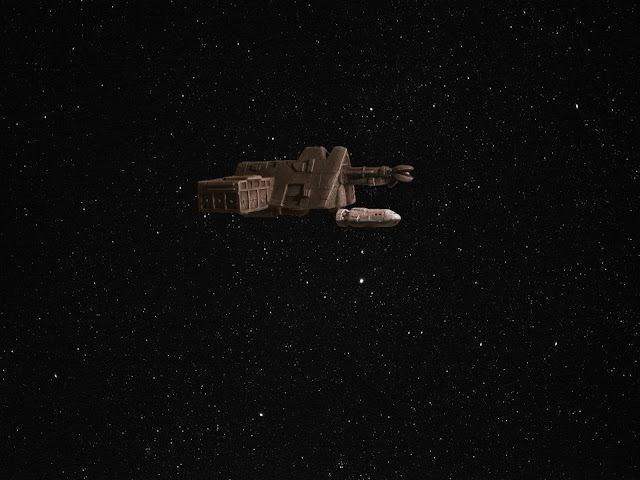 The largest merchant ships likely to be encountered are the bulk freighters, or bulkers that move minerals and foodstuffs from system to system. These might even mass as much as 200KT or more, though they are never terribly fast, as their bulk cargo requires more steady than speedy shipment. Such a vessel with even 2TG of acceleration would be exceptionally rare.

This concludes our emergency crisis release on the ships of the Tartarus Rim. We would advise our subscribers to avoid the area for the foreseeable future.

While Citadel miniatures still figure prominently here for the elves and the tanker, the remaining ships come from other suppliers. For the dwarven fleet I used Vanguard Miniatures offerings from the Helian League line. Most of the merchant ships are from RAFM's old Traveler line. (The only exceptions being the Citadel Goliath Factory Ship serving as a tanker and the Valliant Enterprises Atriedes class freighter at the very end serving as the bulker.

I found the Vanguard examples to be a little challenging to paint, as the resin doesn't take paint terribly well at all. (A good soaping down and a spray on primer of the sort I almost never use might help.) That said, the end result is quite effective, and they fit the GW setting very well indeed. (I should think they would pair quite well with modern Battlefleet Gothic.) I'm ultimately pretty happy with them. My one wish is that there were more ships of middling sorts of sizes. They have lots of very big ships that can serve as super-battleships, and plenty of small ones to serve as small cruisers and destroyers, but nothing that pairs well with a typical larger cruiser or battleship. To put it in Space Fleet terms everything is much bigger than the Gothic or smaller than the Firestorm. Everything in the Helian League line I used is either smaller than two inches or larger than four, and that seemed about typical. It makes for a big gap. Not the world's biggest problem, but I wish there was more in the middle.

The RAFM stuff is lovely, but a little hard to find these days, as it's long out of print. There might be a company making some of the same designs in resin, but I won't spend any time discussing their quality as I've not had the pleasure of painting any. (That said, I'm thrilled to hear someone else's reviews.)

But I failed to review the Valliant Enterprises Miniatures in my last post, so I'll correct that oversight here. These were . . . interesting. Fiddly. They're honestly fairly attractive miniatures that look pretty good when you're done with them. They take paint well enough and they have plenty of relief making them look great without much more than a black basecoat, some blocked in color, and some hastily drybrushed highlights. The details feel familiar, like they're bashed together from pieces I feel I know somehow like drywall anchors or model train parts. But I play similar games myself and the result is quite effective, so I find that to be more feature than bug. (After all, Battlestar Galactica was made with tank hulls and Saturn Vs. And the same can be said of a lot of Star Wars models. If it ain't broke, don't fix it!) The castings were a little rough in places, requiring some straightening in the thinner spots and quite a bit of cleaning. But all in all nothing out of the ordinary. Assembly wasn't always obvious, but they do have instructions for a reason. If you like the look of these little spaceships I highly recommend them. The prices are quite reasonable. They seem like a pretty darn good little company and I'm glad to support them.

That brings this chapter to an end. I hope you will join me as we return to story related posts, and hopefully even a battle in the very near future.