The Sentinel Gate Affair, Episode V: A Friend in Need

Continued from Episode IV: A Fine Day for a Parade

Colorado fought to catch her breath as she walked up to the long table. Deep in the bowels of the executive mansion the room looked to be a hastily converted storeroom, dusty from disuse and still packed with crates and boxes that hadn't yet been moved aside. Several of her friends and co-conspirators had already arrived. Christos Commodus, Lord Whye, stood at the head of the table, immediately to her left, a small pile of papers in front of him. To her right his eminence Yaddish, the Padda ambassador, stood with the elaborate pot of office that contained a quantity of the liquid his people used to seal agreements and to season nearly everything they ate. (Their word for contract, deelsous, apparently translated to agreement juice, though she suspected he had it tonight more for savory reasons than seditious ones. The rebellion was already thoroughly agreed to.) To his right were Dame Astrid Shaam, the Propraetor Jus Tartarum, holding her charge, Lord Ali Khan XIV. Over her shoulder her husband Lord Bakker Shaam, the fourth Baron of Morgan, glowered. Perhaps he was worried he'd lose his place in the cursus. They all would, at the very least. More likely they'd be burned as heretics, but there was nothing else to it. Behind them all Inspector Nguyen took notes. 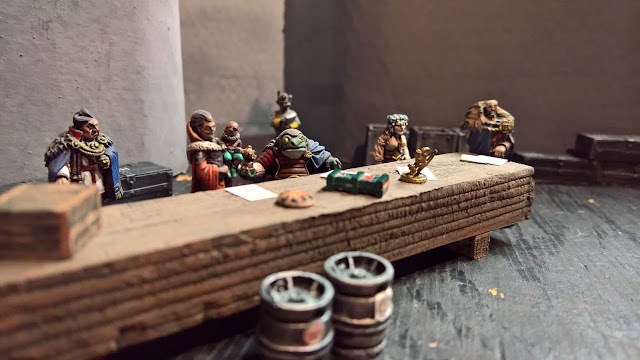 "Let's begin," Christos said. "Time is short, so I'll be brief. You should each have a handout, and there's a map in the center of the table should you wish to consult it. The matter at hand is securing the aid of the Tahti and Burgkhan Kaldun. They've been reliable friends in the past, but we're going to need all the aid they can give when the cruisers start dropping out of warp."
"Do you have an idea of the Terran commitments?" asked Bakker.
"Not yet, but they'll doubtless be significant. Colorado, do you think Sir Stanley could meet with the Dwarves? He seems to have a knack for it."
"I think it's their mutual fondness for a good malt," Colorado replied. "Yes, I think he'd be willing. He's with the fleet at Hecate aboard Proserpine. Could she be spared for the journey?"
Commodus scratched his chin and thought a moment. "Yes, I think so. It'd be a good exercise for them anyway." He paused before turning to the Padda. "Ambassador Yaddish, do you think you could make our situation clear to the Tahti?"
The giant frog croaked slightly, deep in his throat, before answering. "Yes, I think I could. But my shuttle couldn't make the journey. I believe they're presently out in the void past the Moirai."
"We could make Moab available for you. Would she be suitable?" Christos responded.
"Yes, I believe she would," said Yaddish. "That will be perfect."
"I believe that's the crux of the matter. We need to begin mobilizing and preparing as quickly as possible. Astride, I'm counting on you to secure support in the Senate and the Camarata. The Propraetor Imperium can be a bit headstrong, but I think you can get him on board. And with him the rest of the legislature should follow."
"And if not," she said, "I'll arrest him."
"My word, what days we've come to, when judges might arrest senators." Commodus shook his head sadly. "The only way to get the world we want is to fight for the one we're given. I think that covers everything. Carry on and let's make the inquisition rue the day they set foot in our sector."
A general round of assent went up. "Hear hear!" "Indeed!" "Amen!" and something guttural and almost primal seeming from the amphibiod throat of the ambassador.
. . . . . . . 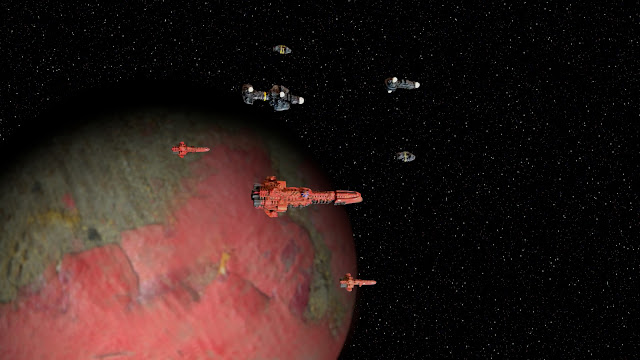 Sir Stanley Ursaline Drakemore stepped from his shuttle into the airlock of the BKN Chinghis Khagan. She was a truly massive ship, even bigger than Proserpine, quite probably the largest warship he had ever seen. He was surprised he'd been permitted to travel her corridors alone, but the bosun had given him clear instruction on where to go. He walked down the long hatchway to his right toward the blue door. 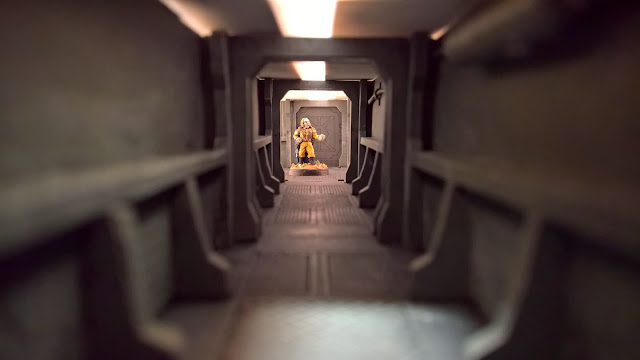 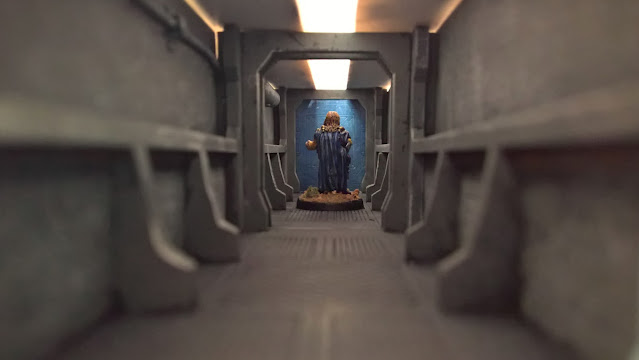 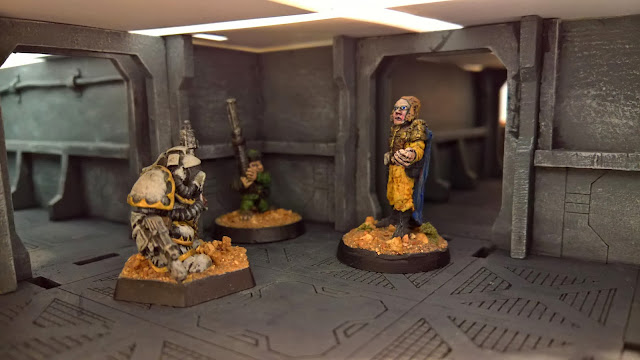 "Your grace, Tartarus calls for aid. We have need of your assistance to protect the spacelanes from the Terran despot," he said.
In a deeply sonorous voice the armored warrior priest replied "The dwarves of Burkhan Kaldun Freehold are ever loyal. And we know the evils Terra would perpetuate in their constant fear of the other. We will answer your call. Say but where."
"That will be a matter for the admirals, but I expect they will make for the gate first. Either way, they'll need to pass Kerberos. And we've a good fleet base there."
"Then there shall we go."
"Excellent!" 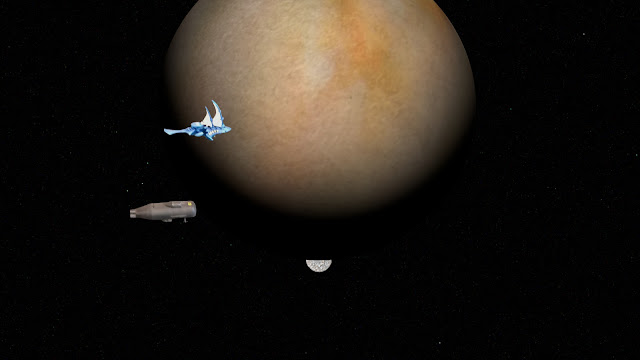 Meanwhile, in the far northern reaches of the rim, past the stars known as the Moirai, the froglike Padda ambassador made contact with a Tahti ship and thought about just what kind of "deelsous" he would strike that night to be sure of the elfin support. 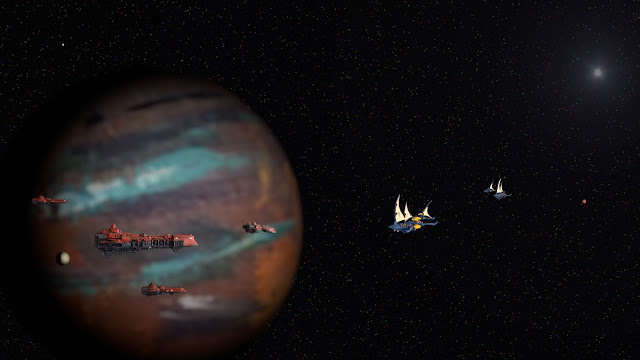 Barely a week later and fleets of the Tahti and Burgkhan Kaldun, the elves and dwarves as they were popularly known, were entering parking orbits at the sole planet of the star called Kerberos, just coreward of the Tartarus Gate, at the edge of the rim and sitting astride the only safe route from the Memphian sector.
. . . . . . .
Further south, toward the galactic core, Augustus beamed as he arrived at Neith II. The ships of the Emperor's navy had begun to rendezvous in orbit beyond the moon even before he arrived aboard Armentarius. 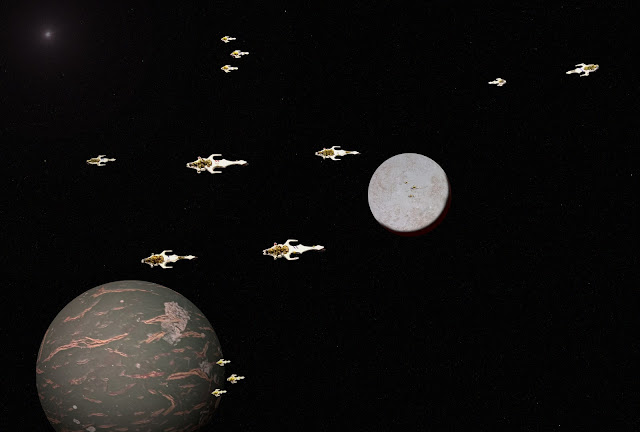 He boarded a pinnance and transferred to HIMS Legatus, which was acting as the flagship of the force. 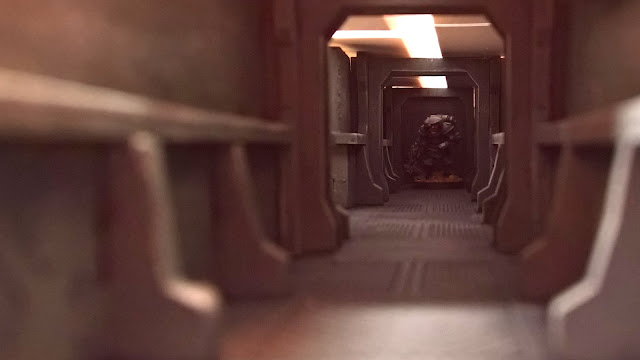 He met his brother inquisitor, Robert Gaihomme, at the first junction. 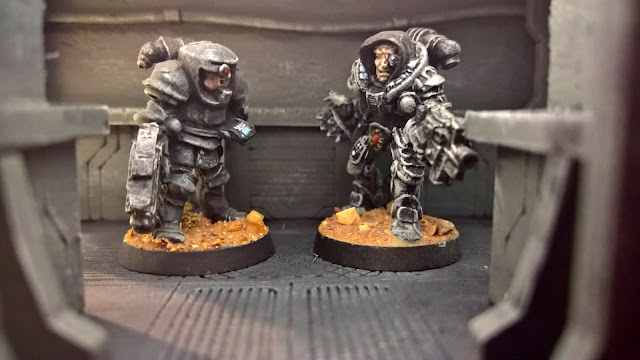 "Augustus, you were expected. May your arrival bring us many blessings."
"And you also, Robert," Augustus replied. "This fleet couldn't arrive too quickly, though I surely wish it were larger. What can you tell me of our forces?"
"You've probably already seen all the ships. We've been dispatched with a half dozen galleons and half again as many galiots. We've a company of the Sixth Marines' finest aboard the galiots Aspis, Fulvius, Crotalus, and Ophiophagus."
"Excellent!" said Augustus. "The sixth is a suitably ardent legion. They've no love of mutants and xenos in their ranks. We'll need that kind of dedication to cleanse this sector of heresy." He thought for a moment before continuing. "I presume that you'll accompany the fleet, correct?"
Gaihomme answered "Correct."
"And has any thought been given to spiritual support for the legions?"
Gaihomme gestured to his left down the adjoining corridor. "Inquisitor Marcos Castrian will accompany them," he said, as a third grey armoured warrior monk strode into view. 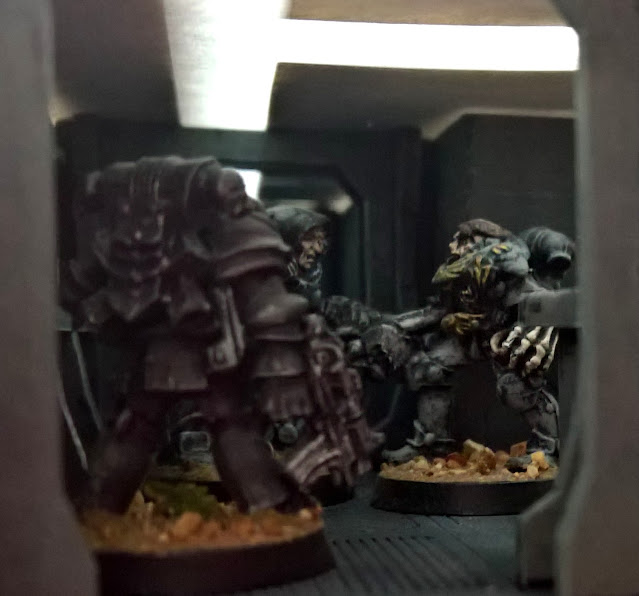 "Father Augustus," he said. "I'm honored to meet you. I've heard great things about your ardor in the Terran cause; your zeal to find and remove heresy. I hear you've found a den of it," he said grinning.
Augustus frowned. "Indeed Marcos. The Tartarans have taken to consorting with . . . elves. And orcs! I think I might have seen a floater. There were mutants beyond counting. There might have been ape people, the benighted frogs. It's beyond comprehension, I tell you."
"We'll sort it out and put them to the fire as lead the people down this path," Marcos said. "Don't you worry. "The Emperor's wolves will break their bones and rend their flesh ere another fortnight has passed."
"I pray you are correct," Augustus said quietly. "Organize your troops. You will take this rather modest armada and subdue Kerberos first, so that we can use it as a forward outpost from which to launch our attack into the heart of the Rim itself. May the Holy Terra's peace guard you and may you bring His Majesty swift victory."
Augustus took a step back. "I can't stay over long. I'll need to inspect our facilities on the surface to insure that the corruption hasn't spread this far. On the way out I sent word to a detachment of the 32nd Marines. They should be on planet now. I'll meet them. Send word after you secure Kerberos and I'll provide further instructions."
"Yes father!" the two monks said in unison.
Augustus strode off, re-boarded his pinnance, and soon found himself back in the comfort of a roughly Terran gravity well. This would be a long and complicated process, but in the end, he rather relished the task. He'd never before encountered such heathens in need of the Emperor's justice.
. . . . . . .
Thank you for reading along, friends. Stay tuned for the next edition of the Sentinel Gate Affair in Episode VI: The Battle of Kerberos.
Sincerely,
The Composer
Posted by The Composer at 3:34 PM