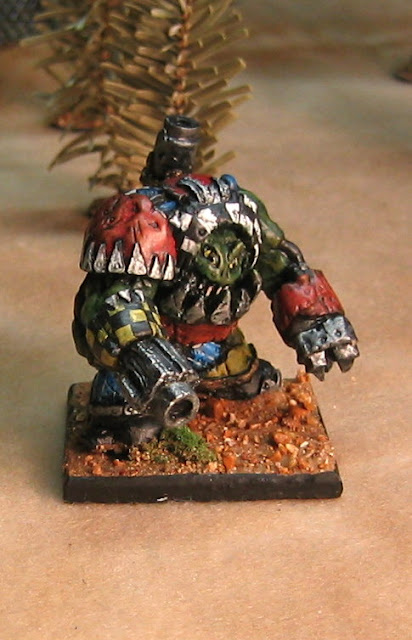 . . . and a few other things along the way. It's time to wrap up January . . . a few days late and a couple of miniatures short, as per usual. We'd have done this quicker, but we had a little accident at the paint store. That can of dullcoate? Yeah, not so much. Seems it was the gloss. I hate the gloss. Can't ever completely get rid of it, though I've heard a course of antivirals helps. With time we're dulling things back down as best we can, but there'll probably always be a little residual glow from the infection.

Still, there's some good work here. Don't really want to consign them to the "strip and start over" bin just yet. Given that, we'll start with a fellow who used to go by Big Robb. Now his friends call him Robbie the Robot, or just Robbo. Of course they tend to do that when he's not looking directly at them. He's a little hard of hearing, so he misses things like that. He used to be the still-master at the famed Cap'n Oldermould fermented mould distillery until a vat explosion (who put the 'splodey squig in dere?) left him without his hands, most of his right shoulder, anything below the rib cage, and about 80% of his brain. Fortunately, orks don't really use that part anyway and most of the rest of that stuff can be replaced. Doc Hobble and Mr. Burn duly stitched him back together, added some new bits, and adopted him into the troop of "dreadlies." 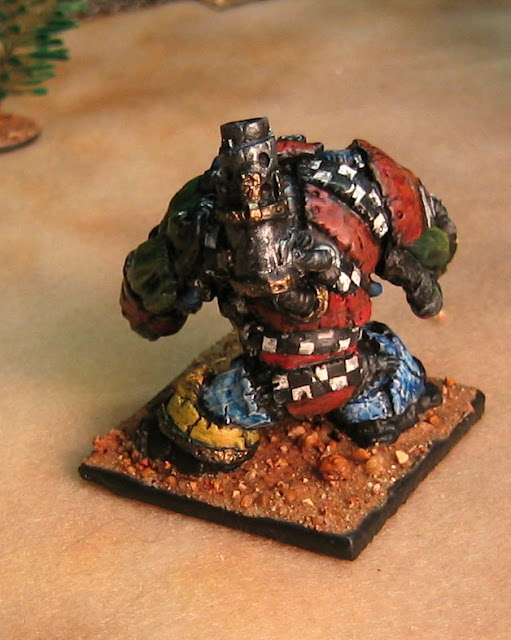 This fellow is from the Ramshackle Boneyarders range of Nuclear Renaissance figures. They call him Gorillagon. (I can see why.) I've shown him in the company of some more standard orkoids above to give comparison (and to acclimate him into his new unit.) Below you can see him in the mixing it up with a short-leg oldhammer ork dreadnought, an ogryn, and the dual occupancy body members of Squigfeather's crew. He's a big boy, this Gorillagon. I think he absolutely fits right in among the orks. He even comes built in with some orky tooth pattern decoration that's just screaming for elaboration. There are several arm options, so mine isn't necessarily quite the same as yours will be, but it's a straight up build. I didn't tinker with it beyond cutting off the cast-on scenic base and replacing it with my own. 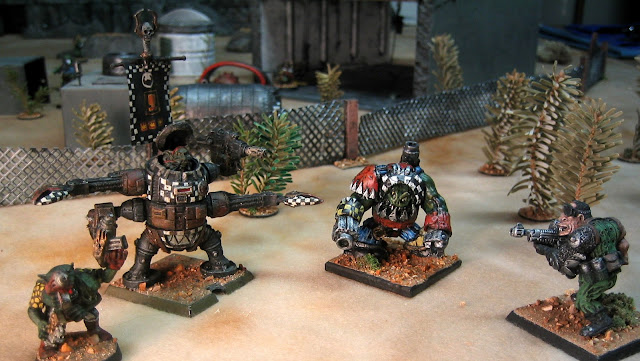 My new years resolutions included work on my eldar force and my genestealer cult. You can see a little bit of both here. These four fellows were also victims of the "gloss paint debacle." Even after considerable dulling they still look a twitch shinier than I'd like, but hey, they'll be okay. 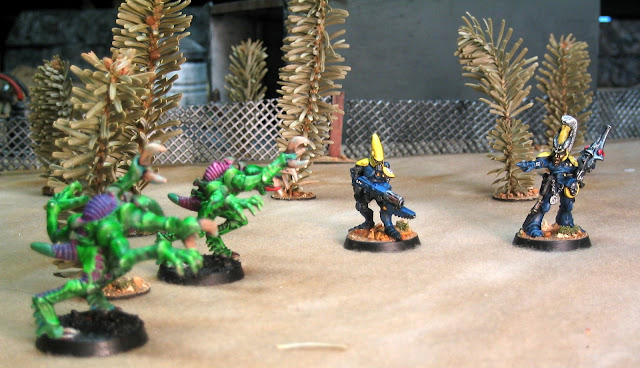 To finish out, I built these two little terrain pieces a while back and then never got around to posting them. Both started life as packing materials, which I find to be a source of endless inspiration. They often look quite industrial. The first was the plastic insert in a box of 1/700 aircraft I'd picked up for some naval wargaming. (And which really ought to be the subject of their own post one day.) To it I added two worn out faucet cartridges, a small anime model piece whose provenance is lost to me, and some styrene stock. 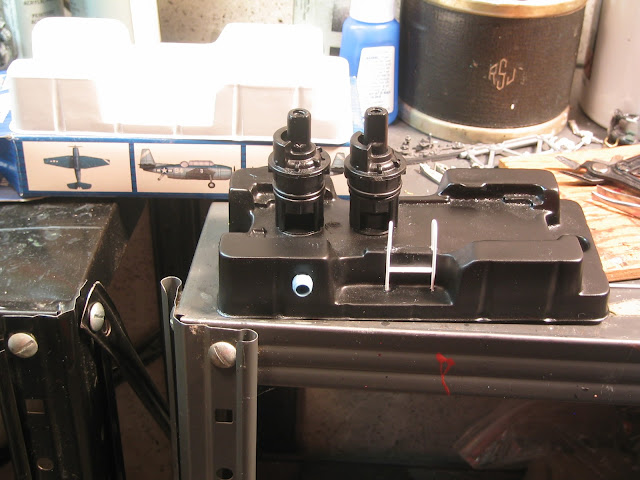 Next up was the insert from . . . a round air freshener box? Add a few bits and some paint and viola . . . you have an industrial wastewater tank, or a well (which might be the same thing in some parts of the 40K empire) or a cistern . . . something like that. A concrete pond of some stripe. As an added feature, the plastic was clear, so you can make a very glossy pond surface simply by painting the back not the front. 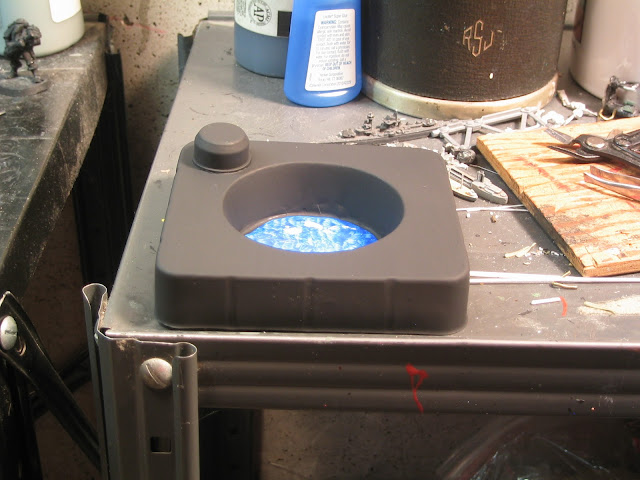 Here's the two of them painted up and with a little added foliage. (Abandoned industrial sites ALWAYS have plants in the darndest places. Plants are patient. If it will collect dirt a plant will grow there eventually. And make it bigger so it collects more dirt and so on.) 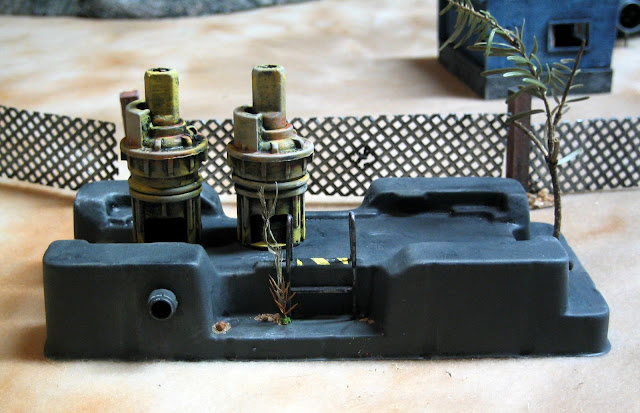 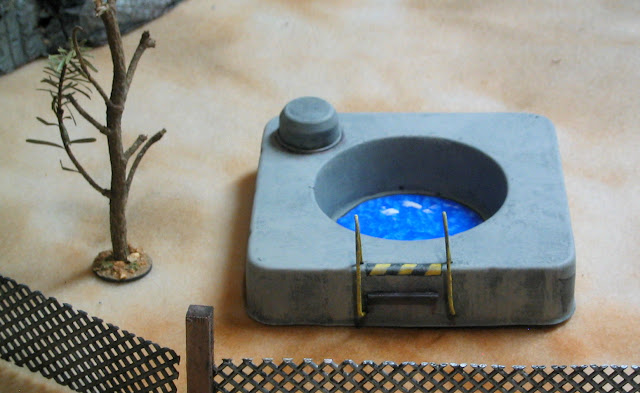 So January wasn't too bad: an adventurer, several space slann, a bunch of trees. a couple of elves, a pair of bugs, and some industrial leftovers. Not my best month ever, but not bad. February is shaping up to be equally interesting if not more so, so stick around.

As always, thank you for reading. I hope you liked what you saw.