Beauty and the Beast: A Fairy Tale of Wild Women and Satyrical Soldiers.

I like contrasts, and my February paint-cue surely shows that. It's been a month of the archetypically beastly and beautiful. Walking through a certain toystore once a friend pointed to a very masculine item called the "Bulldozer." It was large, black, and hard looking. The box was decorated with high visibility hazard stripes. On the cover were strong men posed with the namesake heavy equipment. It was clear that this was a toy designed for men by men. I wondered if the pink dolphins and transparent purple fairy wings to be found elsewhere were truly a woman's counterpart of this ode to testosterone or more properly a male fantasy of the feminine. (I strongly suspect the latter.) Much like the store's wares my own toys don't represent any proper study of masculine and feminine, originating squarely and uniformly in one or another Xy branded psyche. That said, the reference to the popular Western archetypes so deftly abbreviated in the French tale should be fairly clear.

Before the gigantic ogre of the previous post I painted these three elves. (Two of whom are male, no matter how glittery they might appear. Elves are always a little "metrosexual.") 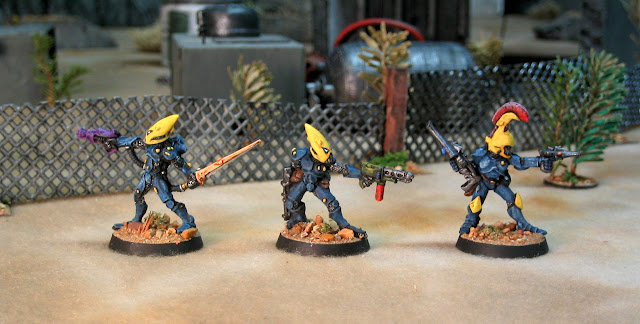 Odd as this may sound, the elves are probably the least obviously gendered characters I've painted so far this month. While the officer is female she still elicited the standard "ugly" (but well painted dear) from my wife.

The next character, whom I'm calling Nepenthia Rex-Avis (Arthur Zanzibar's cousin), received no such greeting. 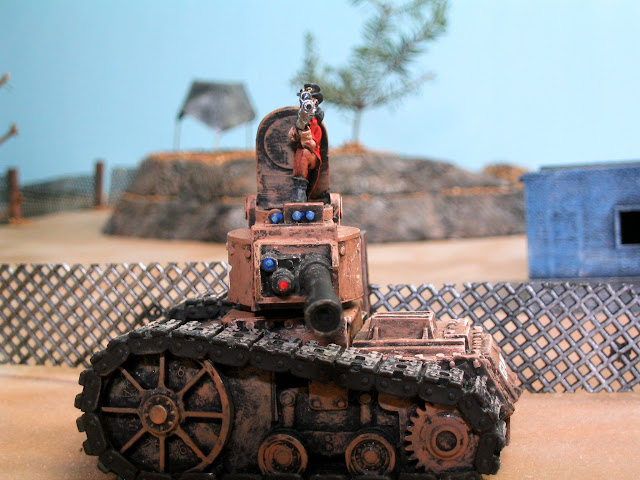 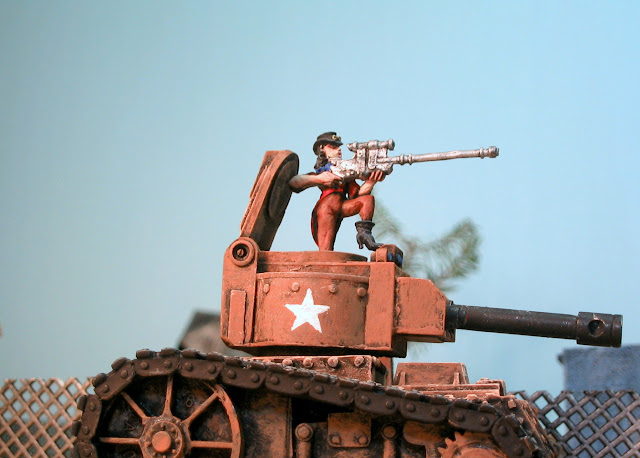 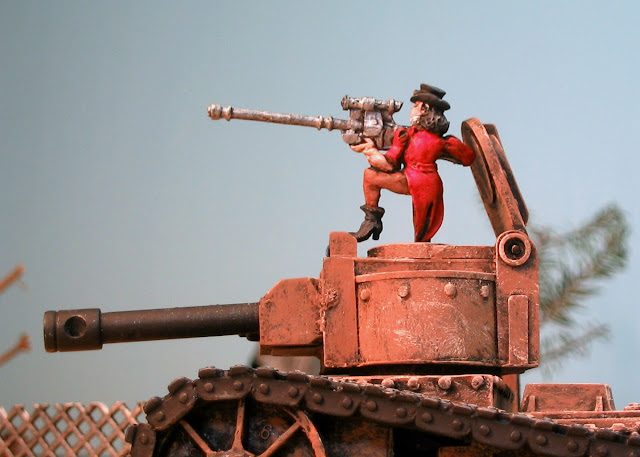 Nepenthia will, of course, give you surcease from sorrow if you but ask. The figure, Fidelia St. John Smythe, is another character that was available for a time from Ramshackle. She seems to be out of production now, sadly. If you can stumble across her she's a singularly characterful sculpt that would fit perfectly in just about any space western. It saddens me a little to review her knowing that she's become a bit harder to get hold of. Still, one can hope that Curtis will re-introduce her at some point, should there be enough demand, and she is something of an oddity, being designed specifically to fit into the hatch of a tank. (In this case the Vole Light Tank.) So she's a beauty that implies the presence of a beast by her very posture.

Next up, PFC Asean Fernsy: 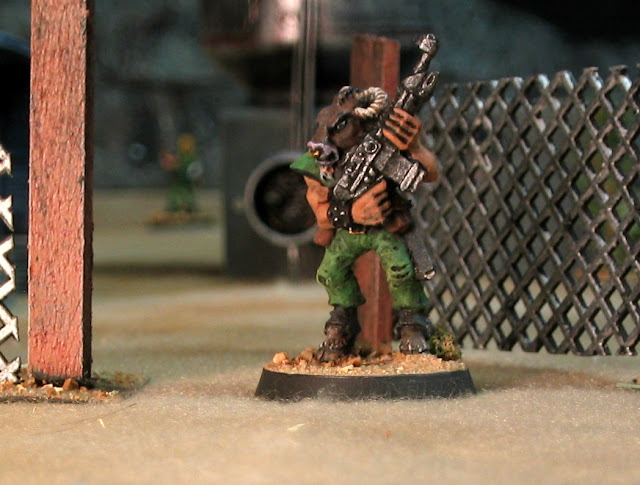 He's none other than the elusive "Trooper Gaxt" from the old Citadel adventurers range. He's a quite goaty figure to begin with that I've hopefully made more so with a little careful pigmentation. I like to imagine this particular satyr sends up the punk rockers of my youth with his ripped trousers, spiked wristband, and bared torso. (The last of which is lost in the shadow in all of my photos, so you'll have to trust me. Our goat has no shirt. Only shoulder pads.) Anyway, I am decidedly pleased to have him in my band.

Here you can see him keeping company with our last new member, Jackie Kriegschreiber: 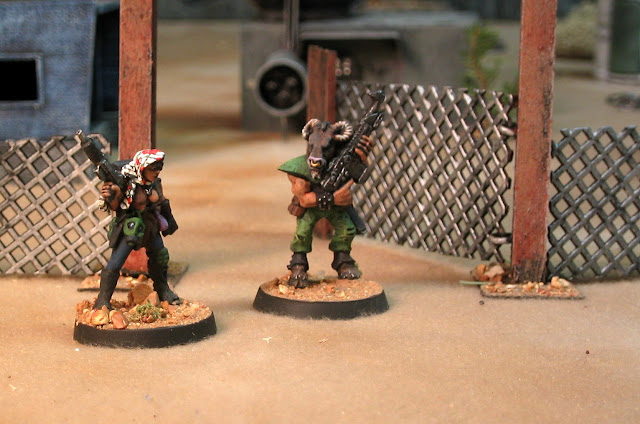 This truly fine lady is a part of EM4's scavengers range. They call her "Female Scavenger. Autoshotgun. Yasser Scarf." To my mind the scarf is more evocative of Jackie O or Audrey Hepburn, thus I've tried to give it a more feminine floral print; undoubtedly one of the more ambitious bits of painting I've done lately. My wife's first comment? . . . She loved the scarf. I'll take that as a positive review. She even called her strong. (Must be the eyepatch.) 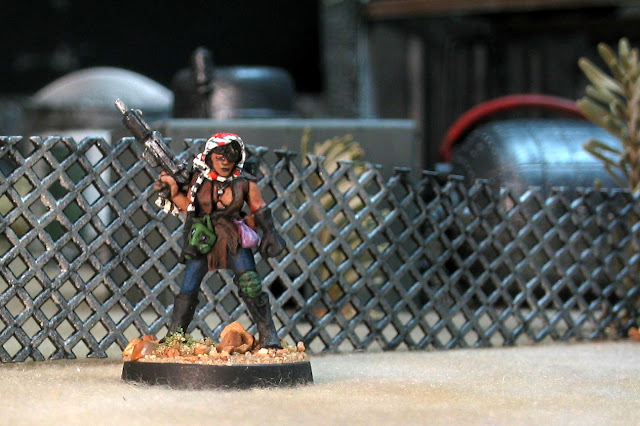 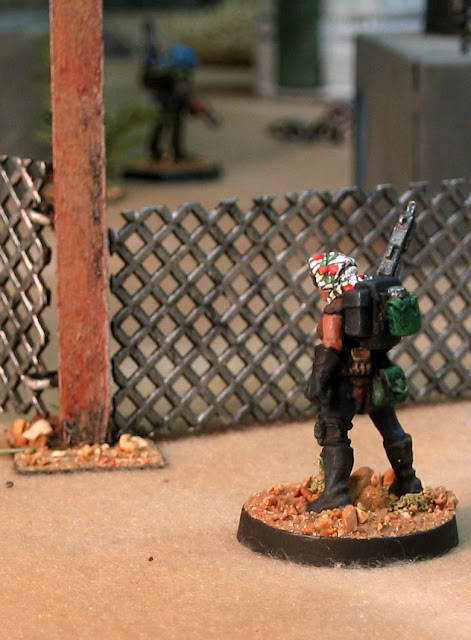 Indeed, she is a dangerous looking and quite well armed character. (The EM4 scavengers are nothing if not prepared.)

All in all, I'm really quite pleased with this bunch. Of course, that's why I painted them. As always, thank you for reading along. May your own meetings on alien tabletop worlds be filled with mystery and adventure.