Now for the lighter stuff. Of course just about the same time GW began to super-size their astro-arsenal Citadel moved away from the lead miniatures I talked about in Part II and into the recently departed world of "pewter."  (I guess they prefer to be on the other side of frivolous legal maneuvers.) I was at first skeptical, since the material was harder and more brittle, but I jumped aboard. At this point I'm even sold on it, if one wishes to cast in metal. 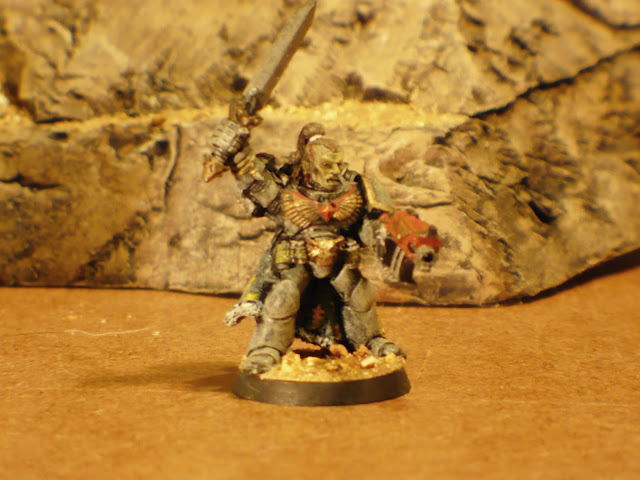 The fellow above is nothing particularly special, but I do like the wolf tail markings I painted on the interior lining of his cloak. The next three fellows go together. There's a kind of tango that happens. Follow with me now . . . 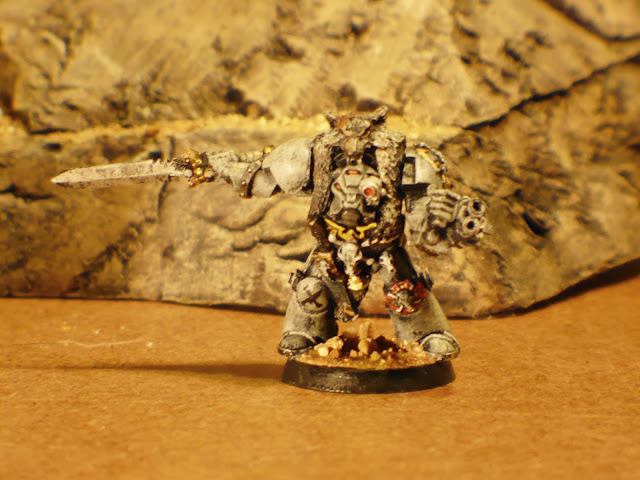 Huh. Those are nifty arms. Where did they come from? 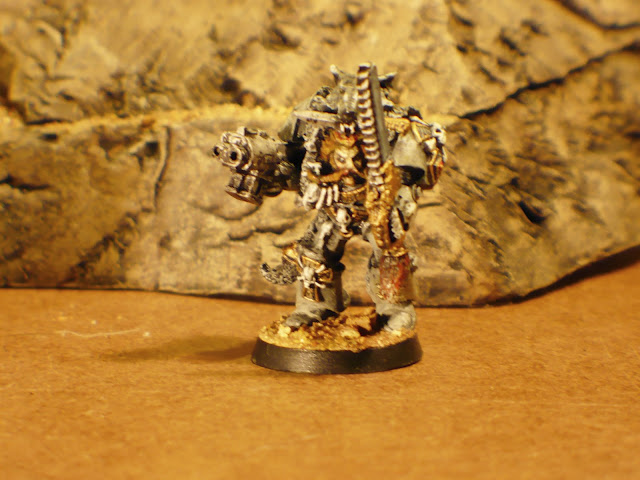 Now that looks suspciously like the "official"Logan Grimnar model (which looks absolutely nothing like the Grimnar in the drawing where he first appeared.) But something's different. Looks like something I saw somewhere else once too . . . One of the very last Citadel models I bought was their "Logan Grimnar." He reminded me very much of the character drawn on the front of the Space Wolf codex. (On which drawing I must assume the model is based.) But they decided to use this terminator for Logan Grimnar, which was in my opinion a terrible mistake. He's "just" another Terminator officer. Maybe even a non-com. Nothing wrong with that, but he wasn't intended to be the leader of the whole dang chapter. Chapter leaders were, by and large, relatively normal guys. More medals. Fancier uniforms. But no special armament or stature. I wanted a Logan Grimnar model. I also thought the model was interesting. But the two needed to be pried apart and a bright line drawn between them. The terminator gave up his arms to the greater good and received in turn two normal, but quite functional ones. The arms came from the second model, which was a normal wolfguard sergeant. I cut the sword off and built it up with a plastic chainsword. I also carved up a knife to put in the jaws off the wolf head and added a chain and some emblems carved from putty to the right arm. Lastly I carved a new wolf pelt from putty to substitute for the one that came with the model. (Which I later recycled with a dreadnaught, to which I believe it is a better fit.) The resulting model is a decent approximation of the drawing from the cover of the codex.
\
I then took the arms from the "Grimnar" model, cut the axe off, and affixed them to the wolfguard sergeant model. I used a sword cut from the third model to replace the axe, thereby gaining two sergeants for the price of about three and a half. (Two really cool and different ones. So I count it adequate.

But in the end I wanted Grimnar. The drawing depicts a quite balding older man with the usual long teeth, but doesn't show much beyond his face and a suggestion of his torso. I had several duplicate Space Wolf sergeants so I started with the one I felt was closest. As a beginning I cut off his head and replaced it with a nicely bearded plastic squat head. I lengthened his beard and let it run down onto the armor in several places, added fangs, and gave him a bionic eye. This was a mistake. When I later looked at the Grimnar model I found that he didn't have a bionic eye, but was instead wearing a targeter. That's what you get when you work off memory, I suppose. (I had misplaced the codex. I was able to find the cover picture online, but not the old drawing from the interior. I wonder why that might be?) Again, I cut off his sword and gave it to the first terminator. In the newly vacated hand I placed the haft of the large axe. To balance this massive piece of weapon I needed a pommel. A piece from the end of a pull chain turned out to be about ideal.

And there you have it. That's about where I left off when I was last in the world of the dark future. For the curious I'll continue by posting a few collection reviews, and I suspect the Malleus Bellum is back to stay, so episodes from Antiques Roadshow and This Old Fig might pop up every now and then. For present, happy gaming.