Once in a while people ask me how I got into naval wargaming. The answer is a little complicated, but here goes:

I grew up on stories, models, and games. My grandfather, who served in the First Marine Raider Battalion, was at a stage where he was occasionally telling war stories when I was young. Most often the funny ones and not the ones involving honest to deadly fighting, but once in while those came out to. And the sword, medals, and Japanese flag were story enough on their own.

Add to this a father who was quite interested in World War Two. I was raised on Sunday reruns of Hogans Heroes and Tora! Tora! Tora! And of course dad was an avid model railroader and occasional aircraft modeler. He built a few plastic aircraft with my brother, sister, and I when I was quite young. When I was in middle school I began to build them on my own, and promptly got into a miniature arms race with a neighborhood friend. We counted coup in rare Airfix, Italieri, and Fujimi kits and in sheer numbers of Monogram and Revel airframes. By the time I graduated I'd guess I had fifty or more and Ben maybe half again that. (He always had a larger allowance than I.) You can get an idea of the scope of the collection in the background of this aging (Kodak instant) photograph: 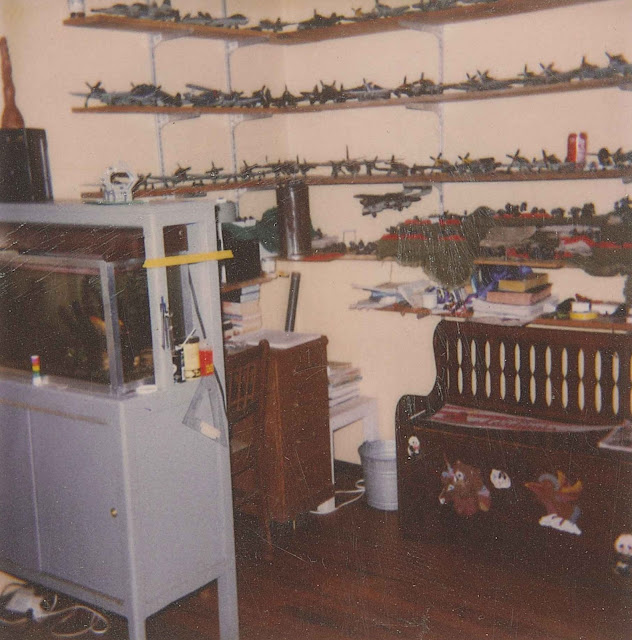 Of course if you have models you have to sometimes do fun things with them: 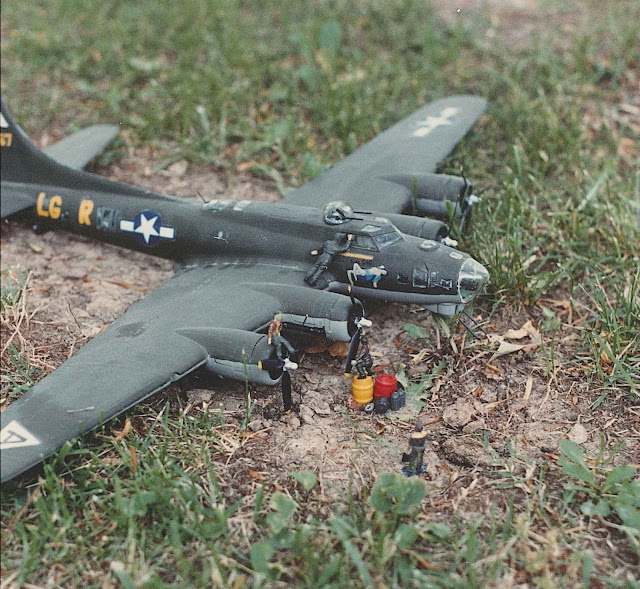 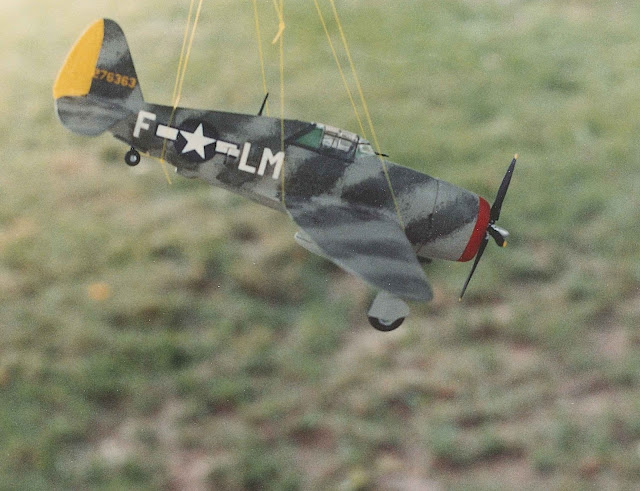 If I can find a way to scan disc negatives I'll add one or two more to the bunch later. (There's a cool one of which I cannot find a print.) But moving on . . .

Even on vacation I couldn't quite avoid the modeling bug. 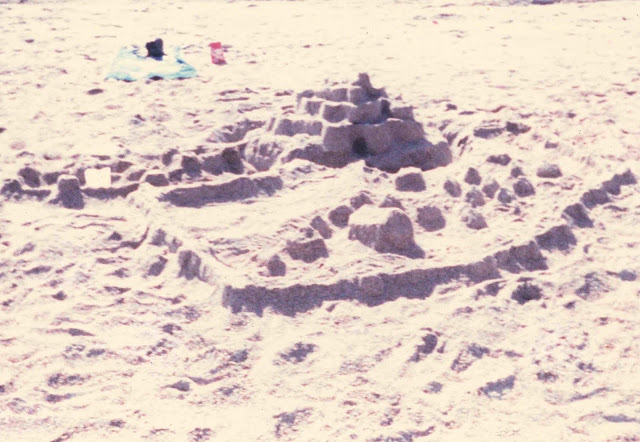 This may not look like much, but it's a crude scale model of a town I'd sketched out in some detail for a role playing game I was in. Later on that town became a kingdom and that kingdom a world, which I suppose I ought to write about sometime, seeing as there's art and it is thus germane to this little kettle of creativity. But this is an aside for another day. Instead let me take you to the a-historical distraction that brought me to the world of formal wargaming. And models small enough to fit several into the palm of your hand. This too is an aside, but it's the one I want to get to today.

Right. So I had an arms race with my friend down the block. Well, one day he and his brother (also a friend) brought home some odd little plastic science fiction soldiers. I hated them. Really hated them. And then a few weeks later I bought some of my very own and stayed hooked for the next dozen years or so. 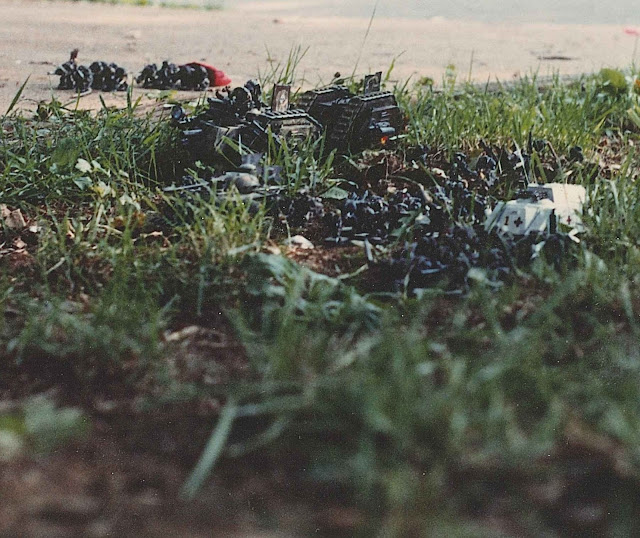 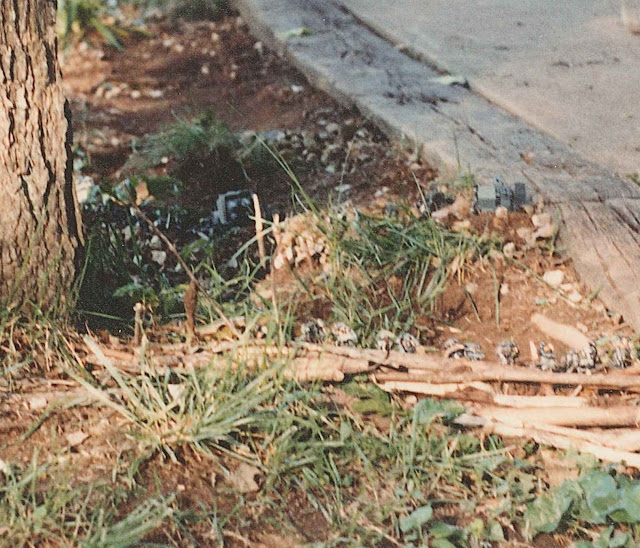 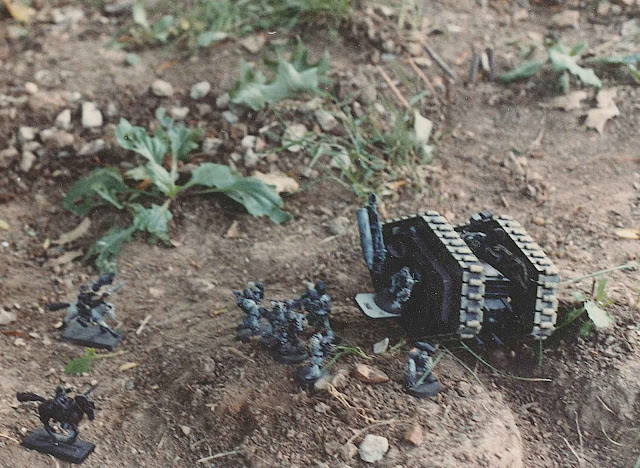 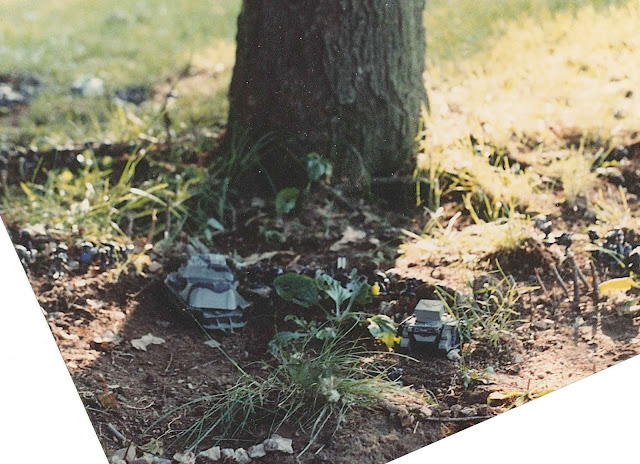 Oyez, oyez, I found myself sucked into the dark and stormy world of psychic monsters, dead emperors, and overstuffed beefcakes in three meters of composite (tactical dreadnaught) power armor. (Or should I say armour?)

The world known to those of us silly enough to know it as Warhammer 40K. (tm)

Yes. I was addicted. Might still be, though I just don't care for what they've done to the place in the last twenty odd years. But that's another story. This is me admitting that I still have most of that stuff. (Though sadly not the Land Raider Spartan seen in the fifth picture. But I think I know where it is. Could even make a new one with a little time and expense.) [Editorial Update: I do have the Spartan., or to be more accurate its bones. Forgot I'd reacquired that.]

So yes, those 40K pictures occasionally popping up along with music in earlier posts are in fact mine. And . . . I've bought some more and begun painting it again lately. Some were in trade for a painting commission, to be fair, but others were bought on our favorite e-commerce site for buying overpriced used jun . . . treasures.I'll take the liberty of putting the results of both the commissions and the recent purchases into another post, which should be along shortly. But back to the process . . .

So that got me into wargaming. You can see an actual game unfolding on the lawn. As I recall it didn't go terribly well for the defenders. Some twenty years later I was teaching music at a small liberal arts college in Marshall Missouri when a colleague decided I really needed to watch the new Battlestar Galactica. I'd been thinking about wargaming and miniatures again anyway, as I'd just started painting a Squat army I'd acquired many years before. (Really should get some pictures of that one of these days.) And BG Mk. II put me in the mood for carrier combat, which naturally draws one back to the exploits of the "Big E," who inspired the "Big G." ("Big Gal," maybe? Every good ship deserves a bad nickname. Galactica shouldn't really be any exception. "Galactigator" is a little awkward so I'll go with the "Gal.")

And there you have it. Cylons lead inevitably to Midway if you follow the right path. Thus did I get into naval wargaming. And in case you wonder, tiny little ships aren't really any more economical now than tiny little science-fantasy soldiers were then. I love miniatures wargaming, but I think the hobby does itself a disservice when a (fancy) model two inches long costs about as much as (an inexpensive) one twenty inches long. Still . . . navies require fewer ships than armies require soldiers so it's not so extravagantly expensive. Just more than you want when you decide to build fleets big enough to refight Leyte Gulf or Philippine Sea. Thanks for listening. Come back later and maybe there will be more.

(P.S. The decoration on the side of the B-17 is not a decal, for the curious. Good luck finding that decal in the late eighties. But that's what every sixteen year old boy wants on his B-17, so I painted it myself. Came up with a novel process to draw it on paper and transfer the outline onto the model so I could paint from that. Ought to revisit that process. It worked fairly well.)