And on the third day the Gamemaster said: "Let there be lead." And He brought forth lead miniatures in all their varieties: man and beast; elves, orcs, and dragons; dwarves, halflings and lesser creatures. Even an artillery piece or two.

But today we're just going to talk about men. (And anyone who dismisses halflings obviously hasn't been on the other end of a sniper scope from one. Or within throwing distance, really. I want a baseball team made entirely of halflings. We'll win every game.)

In Part I we left off with discussions of plastic miniatures. My first experiments with heavy metals were relatively tame as they go. I painted them up and left it at that. 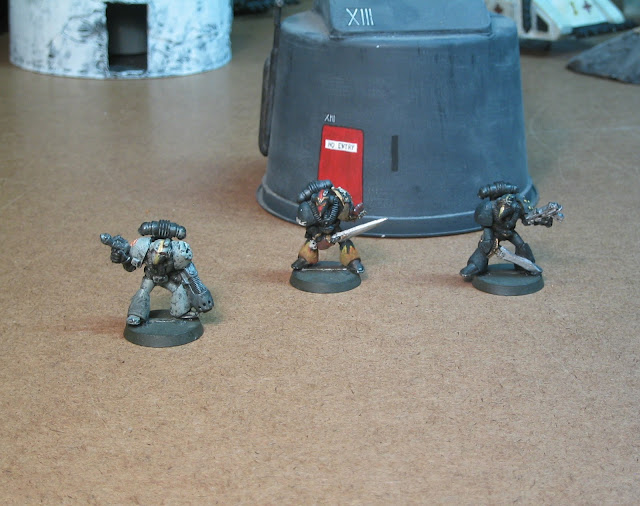 Modifications, such as they were, were little different from what I was occasionally doing in plastic to "wolf" things up: 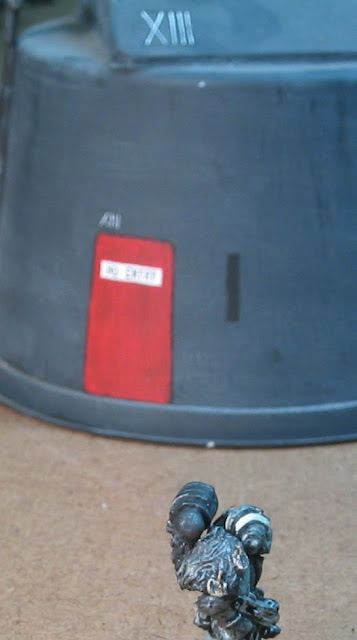 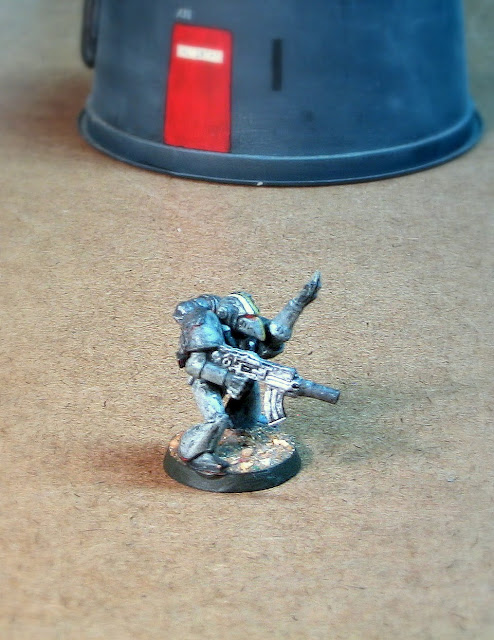 Okay, the plastic guy has some small alterations beyond wolfing. But if I recall correctly that miniature was one I acquired from Ben. I modded the bolter and added the pelt. Ben had already posed it. For some reason I kept it though. But back to lead . . .

One subtle but significant modification is visible in the next two pictures: 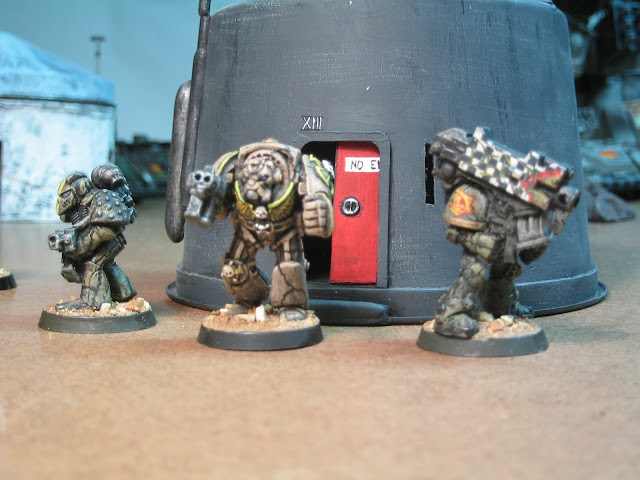 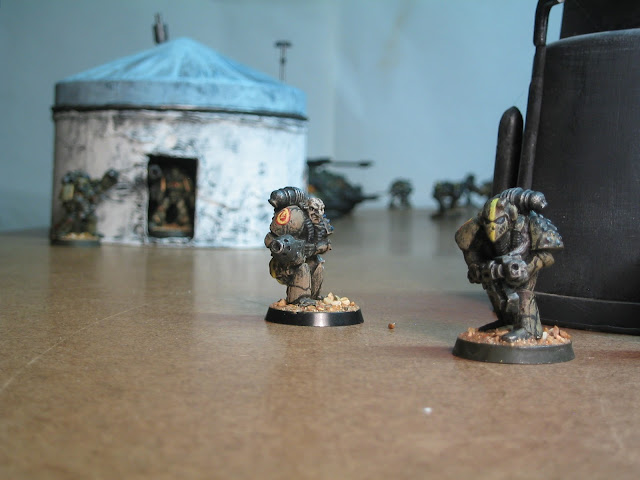 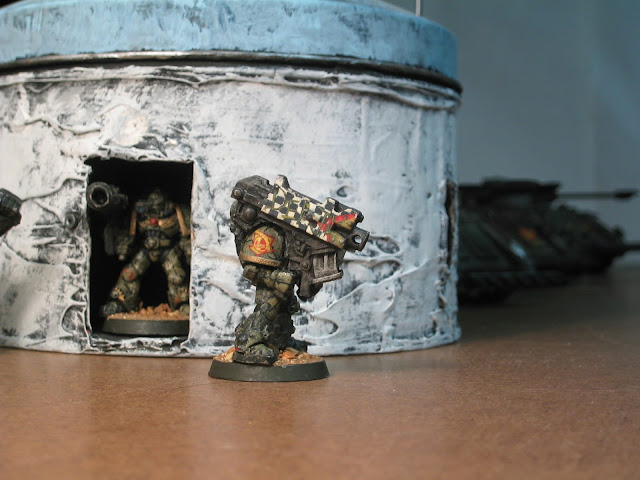 Whad'ya think? There it is. I started drilling out the barrels on my guns. Plastic, lead, or whatever else I might have used. It's a small thing, but I like it. Saw it in White Dwarf and I was hooked.

When the Space Wolves characters came out I had the fantastic idea, absolutely fantastic, that my command section should be mounted on wolfback. Wolves the size of draught horses. Pretty silly, honestly, but I did it. The results were mixed, but I was all of twenty or twenty one at the time. Still learning. 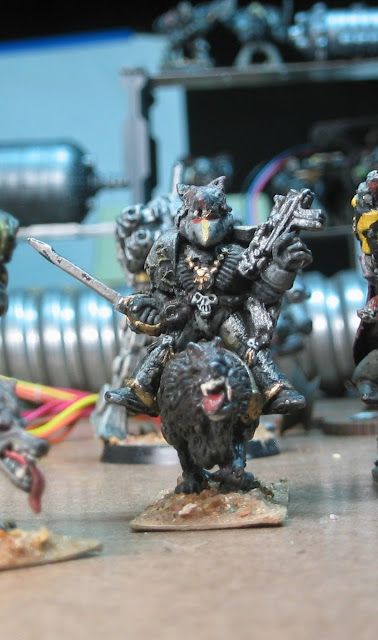 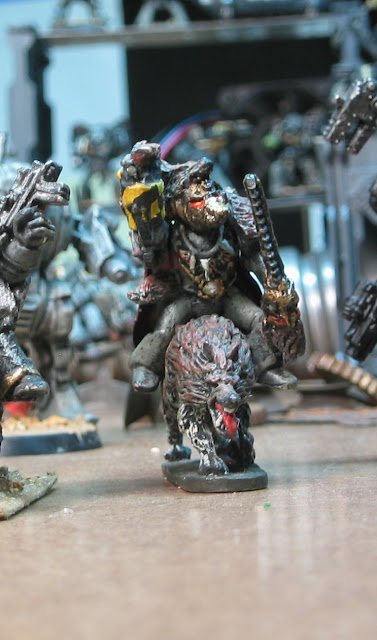 That was the beginning of my experiments with sculpting. Still hadn't discovered kneadtite (or green stuff, if you prefer), so everything was rather crude. But the concept wasn't terrible. I find it might almost be worth updating. Shortly after this I started building an orc army and got a little more serious about conversions.

To the curious, the mage-advisor (*cough* runepriest) started as a chaplain, lost his head, gained a plastic beak, a wire and plastic staff not visible from this side, an assortment of Squadron Signal green putty runes, and a crude home-made wolf head. The CinCWolf, Leman Lord Geri, has plastic legs, a rough-rider torso (apt, no?), a plastic head modified by the addition of a wolf-snout, an orc sawblade coated in putty and sculpted into a chainsword, a spare Freki's head on his helm, her tail on his sword, a plastic power-first, a wire necklace with plastic-sliver teeth, several crude putty gemstones, and a paper cloak with a homemade wolf pelt. While I still have uses for Squardon Signal's green putty, It's not the material I'd use for sculpting anymore. I used it then as I had it lying about, but now I'd go for kneadtite or possibly milliput. (Still have to give the old standby a try. I'm learning to like the "green stuff," but the "white stuff" supposedly has advantages for some projects. Possibly of the largish sort I sometimes enjoy.)

In the next edition I'll show you my very last conversions before jumping off the bus and moving to 1/2400. Of course, I seem to be back aboard, so maybe I'll try my hand at it again now that I've learned a thing or two. And tell me if you spot this evening's easter egg modeling project. Again, thanks for listening. It's a journey, but we're getting closer to the end.