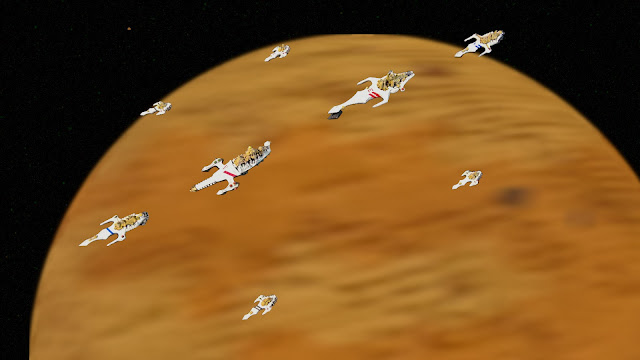 In light of the rising tensions on the Tartarus Rim Jayne's Fighting Ships has taken the opportunity to publish a special addition to our regular galactic annual. It should be emphasized that our estimates are derived only from publicly available information. This is not intelligence adequate for war planning and we neither endorse nor encourage such endeavors. But since this is now become a matter of severe public interest we release our estimates widely so that those who have the ability to sway public policy might do so with full knowledge of the terrible cost that any misstep might demand.

In light of the above preface we will proceed from the best known to the least. The Terran fleet is easily the largest and most potent in our galaxy at present, and possibly in the entire history of humanity. The backbone of the fleet comprises three classes produced in such large quantities as to be nearly universally known, even in the farthest reaches of space: The Furious class great galleons, Comitatus class galleons, and Serpens class galiots. These are the fastest and most efficient of Terra's many warships. 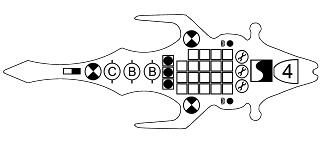 The Furious design is thought to have originated in the Mars yards in the centuries immediately following the Wars of the Solar Succession. Visible below are three examples: from left to right Cursus, Fidelis, and Lictor. Fidelis belongs to the original design, but the remaining two represent the later Collegium subclass, which is distinguished by improved flag accommodations and a much enlarged astronunciation suite, sometimes even including one of the newer waveless sets. 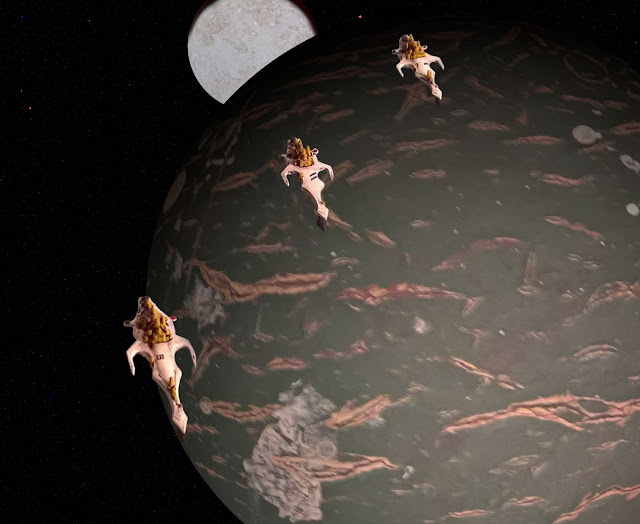 The greatest advantage of the ships is their tremendous speed. They are easily the fastest known capital ships, possessing a backbreaking 4TG of acceleration provided by four Mars type JJAJ reactors coupled to fourteen thrust chambers producing 152KTons of impulse energy. In spite of this exceptionally nimble performance, they boast two of the heaviest class B laser batteries, capable of bearing to each side of the ship, and a plasma torpedo tube firing through the bow. Additional armament includes a C class laser battery capable of tracking the fastest targets and thirty point defense beams mounted in three locally controlled batteries distributed around the ship. They are protected by two DesiLu type energy screen projectors of the most modern design. Compared to other capital ships they are quite light, weighing in at only 38,000 tons at standard load.
Comitatus class galleon and Serpens class galiot 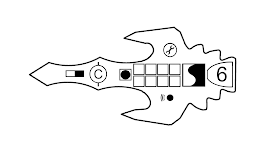 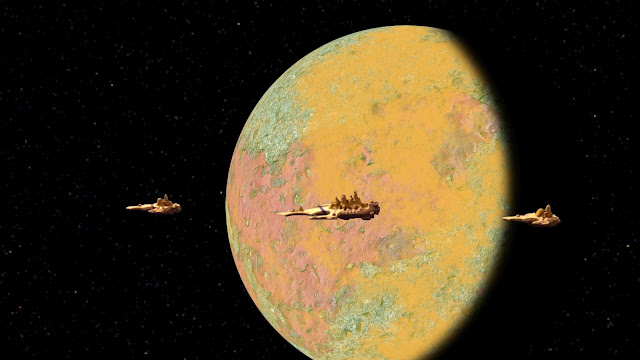 The Serpens and Comitatus classes are quite similar in general appearance, though much smaller. Seen above are Crotalus, Armentarius, and Fulvius sailing in line ahead. The Comitatus class is essentially a pocket Furious, possessing generally similar armament and performance, though on a smaller scale. The Serpens class, however, have an absolutely breathtaking 6TG of acceleration, which they are capable of providing for extended periods, necessitating specially trained crews. They are thought to be the smallest ships mounting a screen projector. Their small size allows the use of close formation flying permitting them to share energy screens. More than three projectors appears to provide no additional benefit, but three ships in close formation have protection equivalent to the largest capital ships.
Gladius class great galleon 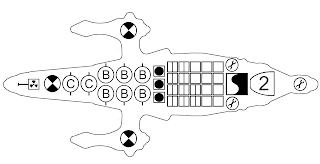 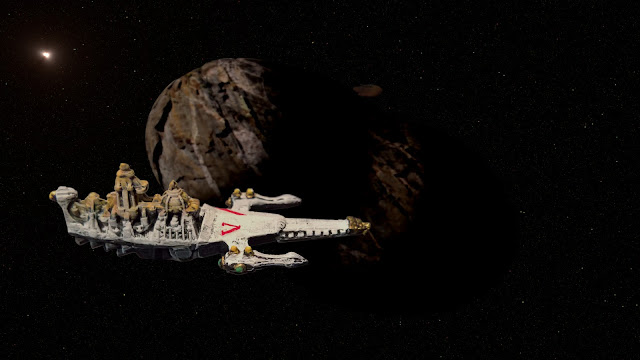 If the Furious class represents the backbone of the Terran fleet the Gladius class great galleons are its iron fist. Represented above by Periastron, these ironclad stalwarts of old predate the succession crisis. They stand out as the first modern galleons, and the oldest ships still in widespread use. In spite of this, they have some significant downsides. Their armament, while many times greater than their successors, gives a broadside only slightly heavier, thanks to less efficient earlier mounting schemes. (Though this does have the benefit of affording some degree of redundancy, albeit at an enormous expense in mass, and thus acceleration.) Second, their ancient hulls do not permit the use of energy screens, so they rely solely on their armored ceramite plates for a degree of protection. Instead of a bow tube they sport an enormous X-ray laser cannon with a range roughly twice that of the more typical B-class laser batteries, though on a very limited arc. The largest downside, however, is simply their anemic speed. In spite of a mass half again as great as the Furious, a Gladius can manage only 2TG of acceleration.
Imperator, Helene, and Typhon class carracks 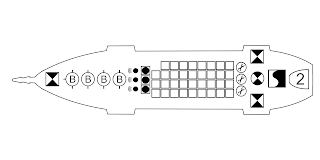 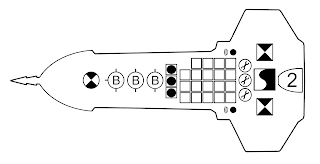 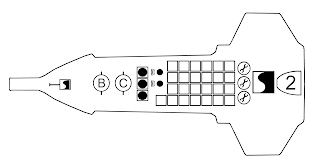 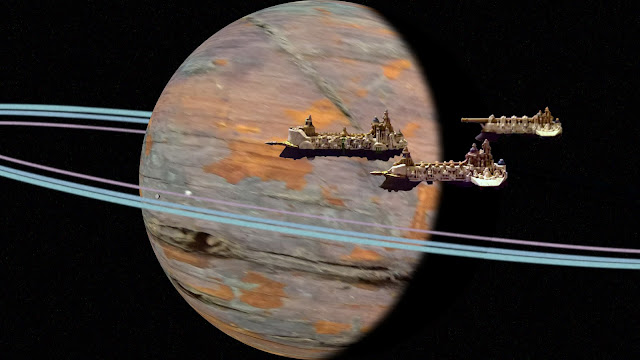 While the Gladius might be the oldest class still in wide use, even older vessels sometimes have a place in regular service. Above are three war carracks of three related, but distinct classes, from left to right Imperator, Polis, and Elysium. The Imperator is believed to be the lead ship of her class, though the records are no longer extant. She is said to date to the Reconquista and served as the Terran flagship in the battle of Jove during the second War of the Solar succession, where she was briefly captured by the rebellious third legion before being recaptured during the the siege of Terra. She is an enormous ship, currently massing some 70KT, possessed of tremendous firepower, with four full batteries of class B lasers capable of bearing to both broadsides. She is slow, having an older Calisto type JJRP reactor, but still capable of 2TG of acceleration. She is durable and well screened, with three DesiLu systems providing full coverage against all but the most concentrated of energy bursts. Despite her age, she is still a potent ship.
IMS Polis is a Helene class carrack. These ships were the mainstay of the Terran fleet during the Reconquista and are still quite common, having served with distinction in every conflict since. They are generally quite similar to the Imperator class, albeit little more than half the mass. Finally Elysium belongs to the Typhon class. These ships are essentially a slightly heavier Helene trading most of their main battery for an enormous spinally mounted magnetic bombard which launches tactical fusion bombs to a predetermined distance in front of the ship. The ensuing ball of plasma consumes virtually everything in its path until it dissipates. While no longer common there are still a handful of these ancient carracks to be found. They are particularly devastating when used for orbital bombardment.
This series will continue with a descriptions of the so called Tartarus Rim Republic in part II, and possible Xeno allies, and merchant shipping to be found in the area in Part III.
. . . . . . .
Behind the Curtain
All the models you see in this edition are 1990s Citadel miniatures from their Space Fleet range. I've chosen to rename them to better fit the story I'm attempting to tell, but the capabilities are broadly in line with those internal to the original game, but converted over to use the first edition of Ground Zero Games fantastic Full Thrust rules. I treat the Ironclad's gun as a AA class battery, as described in More Thrust and the Dictator's as the wave gun from same. (Which is a particularly nasty weapon, I might add.) This is still a bit of a work in progress. I've not attempted to recreate Space Fleet's ramming rules, for instance. And as an exercise in asymmetric warfare ships unfamiliar to the Imperium might have capabilities exceeding what was found in 90s GW games. (It is, at least, a fair bet that Holy Terra's information on the Rim and her allies is incomplete.)
Stick around and I should have more shortly. Ships are painted, photographs have been taken, and the ship sheets are ginned up and ready to use, so all that remains is playing the game. As always, thank you for your patience and I hope you enjoy my little trip to the stars. And again, please do check out Parts II and III.
Sincerely,
The Composer
Posted by The Composer at 5:26 PM