The Lords of Space

I'm not really revealing any deep dark secrets if I should mention that the old Metal Magic Spacelords range is back in production. Apparently the good folks at EM4 acquired the rights and started casting them a year or two ago, but you probably already knew that.

What you may not have known was just how darned interesting these old miniatures really are. I have encountered no single line that reminded me so much of Citadel's old lead in so many ways: the sculpts are diverse and interesting, and occasionally remarkably awkward in that "we're still inventing this art" kind of way that you don't tend to see once an industry has matured. The odd blend of the Victorian, techy, and darkly twisted seems to come from the same fertile sci-fi fields that gave us our first 28 millimeter love; one seeded with T. H. White and Isaac Asimov, fertilized with Frank Herbert and Phillip K Dick, fields worked by the likes of George Lucas and Ridley Scott in the decade immediately before Rick Priestly and his merry band. They were heady times.

I purchased two sets, the ships crew and the civilians, totaling eleven figures for £22 after shipping. At about $3 US a miniature that's not a steal, but it's also not bad, particularly given airmail. And these are PrETTY! 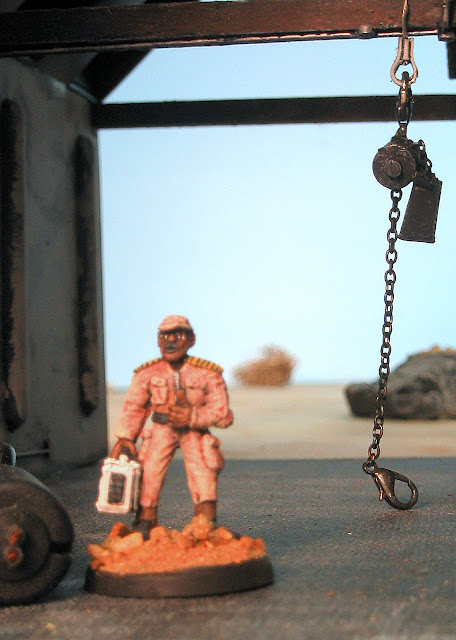 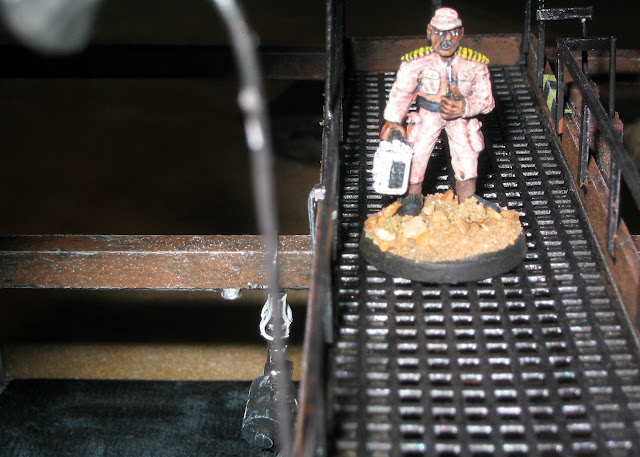 Meet "Colorado" Livinia January Rex-Avis and her favorite suitor Sir Stanley Ursaline-Drakemore, Knight of the Royal Order of the Flowering Lamp. The Rex-Avis clan is one of the more important and yet benevolent families on Moab III. 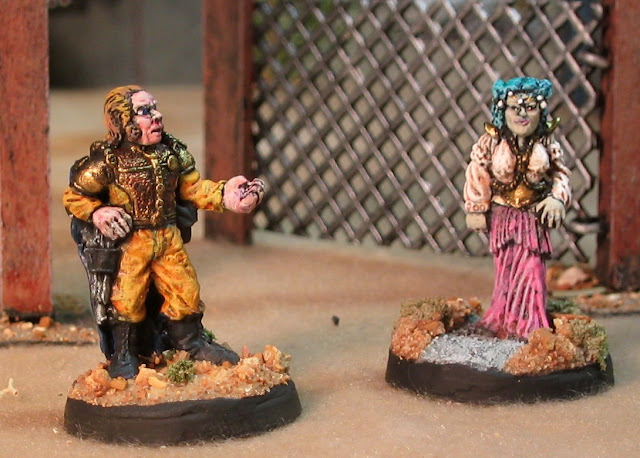 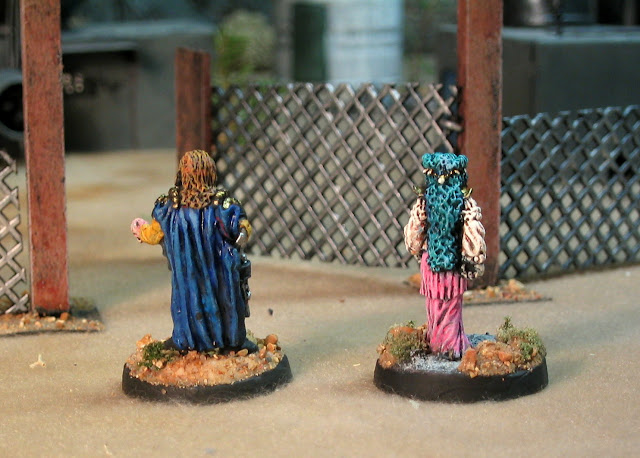 . . . about his new proposal for the Graceful Ghost minesite. 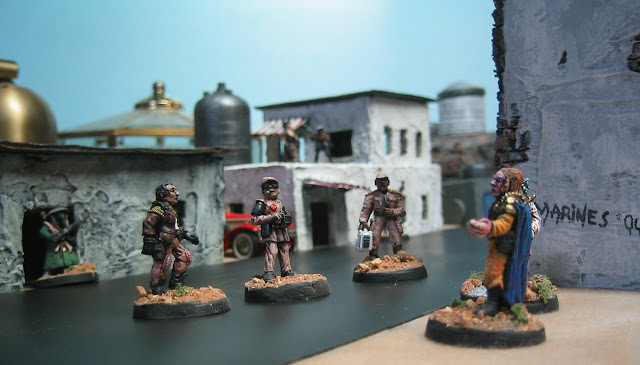 The crew of the March Traveler meet Rex-Avis and Ursaline-Drakemore.

There's a certain way in which an unsurprisingly large number of female miniatures seem to have been sculpted by those familiar with the prototype only by reputation. Sure sure. I'm a nerd. I get it. But you know? Order a copy of Playboy and use your imagination to rescale certain features. I understand that this is the heroic 28 millimeter. Heroes and small models both require that certain features be exaggerated. Further, these are from the land of the Wagnerian soprano . . . (which could provide some useful advice for the cast of a space opera. Don't take gold from mermaids, as karma can be a bitch. Don't double cross dwarves as they're mighty handy with a curse. DO listen to your wife. True love may not conquer all, but if you disappoint your woman it will not come out well. Someone once said it's not over until the fat lady sings. Three points: she sings very well, for a surprisingly long time, and when she sings . . . it . . . is . . . over. Well, except the part where the mermaids sing each to each. That's when it's really over. The little happy bit that comes when the world burns down and the Rhein takes it all? Yeah, that's when it ends.)

Anyway, getting back on topic, I suppose one has to accept . . . certain assets. But between the pose, the overly round face, and the . . . uh . . . proportions, this is a rather awkward figure. Still, she's the exception and not the rule. And even she is incredibly interesting. I like her enough that I used her as the proxy for a good friend and even told her as much. 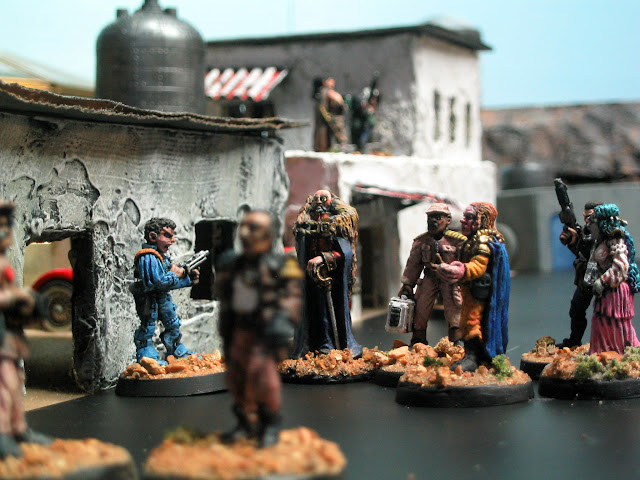 Ursaline-Drakemore discusses plans with local officials and investors in Logansport.

Above you can see some of the Spacelords compared to figures from other ranges. Leftmost in the primary line (the one that's more or less in focus) is the Citadel official from the adventurers range (who I figure is a self important little local magistrate), followed by the admiral from Ramshackle's Society of Intrepid Explorers set, the mechanic from the Spacelords ship's crew, the trader with cape from their adventurers, and at the end another Spacelords adventurer; the lady in long dress. Just over her shoulder you can see the em4 road hero with autoshotgun from their rebels range. I'd say the miniatures fit together fairly well. The Spacelords are, on average, a little taller than the em4 miniatures, a little shorter than the Ramshackle, and on a par with the Citadel. I'm deeply glad to see these miniatures back on the market and I'm not quite sure how I missed them the first time around. They're quite lovely indeed.

For spacelords em4 requests that you e-mail:

I for one would suggest that doing so would be highly worth your effort. I'm sure they would be glad to supply a catalog of miniatures currently in production. (The range is coming back a bit at a time, so it's not all there yet.) These guys are definitely a win for anyone interested in old-school sci-fi.

As always, thank you for your time.