A hundred years ago a goblin was a sort of evil faerie. Something slightly unseelie, perhaps, not quite right. And an orc was a typographical error. Fifty years ago all things seelie and else were bent to the will of an English philologist cum storyteller and goblins turned green, grew several feet taller, and emerged rather more loathsome and of slightly fouler disposition. I suspect it was an uncomfortable metamorphosis. Of course he trademarked the enlarged breed in the midst of some long forgotten legal fight, though it was never a mark much respected in the storytelling community. Among the many abusers of said was one British workshop with which his estate no doubt had some small contact, thanks to a licensing agreement. While they absconded with the species for their own use, much like everyone else, they had the courtesy to change the name and respect the professor's mark. Thus did orcs emerge from the memetic closet as orkz. While they might be phonetically and genetically indistinguishable from their fantastic forbears they too were subjected to rather tedious and incredibly loathsome (trade)marking, which I shall deign to respect just as they did before me. Et dimite nobis debita nostra sicut et nos demitimus debitoribus nostris, gentlemen. I'm going to need it.

Right: down to the sinnin' part.

In some mythologies, goblins ride wolves. In space, they fight them: 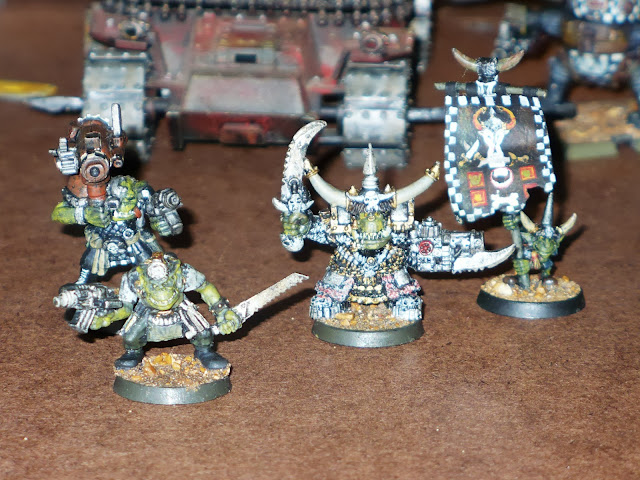 The fine gentleman above, whom I sometimes call the "Mountain King" after Grieg's incidental music to Peer Gynt, was officially christened Gazghkull Mag Uruk Thrakha. Say that three times fast. The name feels like a nod to the professor, in whose orcish tongue "Ash nazg durbatuluk" means "One ring to rule them all." in the same tongue "uruk," of course, means orc. (Or ork if you prefer filing lawsuits to being named in them. Sometimes it truly is better to give . . . )

Aside: what happens to unholy things when they are christened? Maybe that's all a part of the dark gestation that brought us orc/ks in the first place. Seal your lovely little gobli-mogwai up in a chrysalis. Pour in some holy chrism sometime after midnight has tolled. After the smoke clears a hunched little man with green skin and a bad case of halitosis emerges. And you realize something has gone very very wrong. I recommend you run at this point. And you best hope he isn't riding one of these: 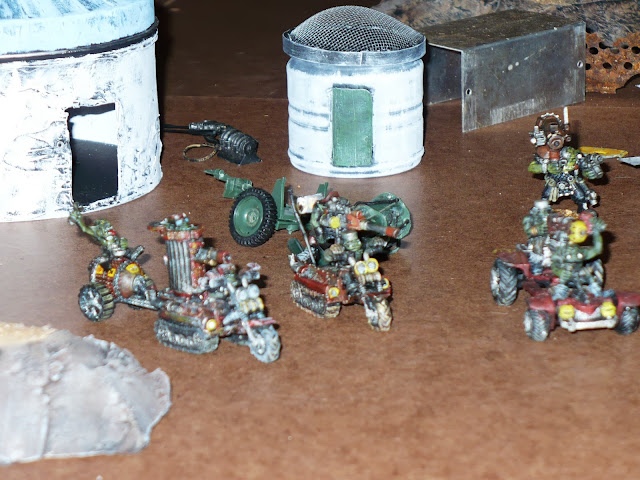 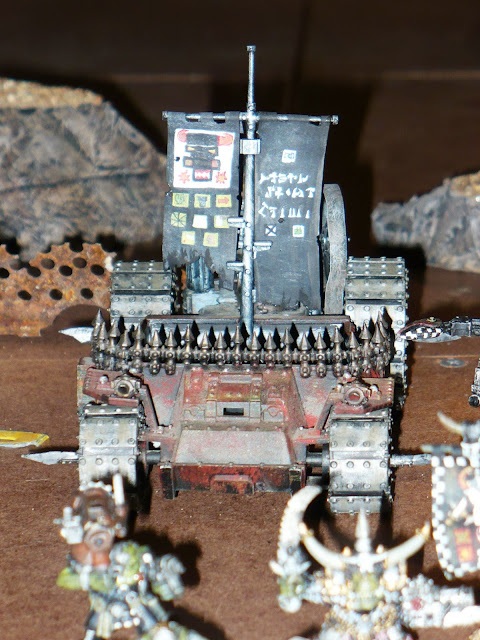 Every police officer will gladly tell you that the red ones go faster. Just why we're not sure, but they do. Red fire trucks, red corvettes, red cobras, and indeed little red wagons with rubber-band drives. 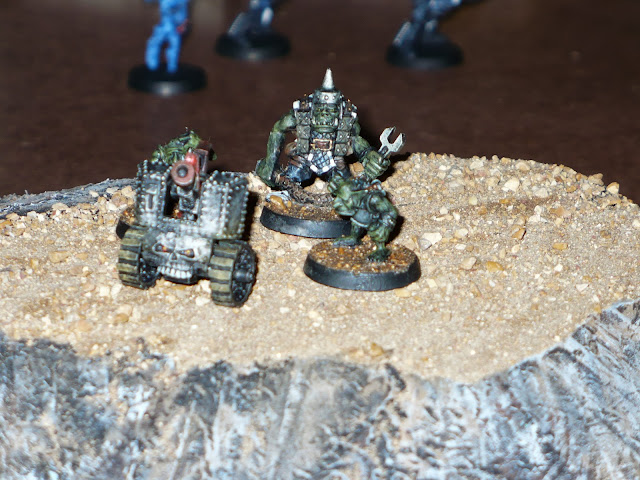 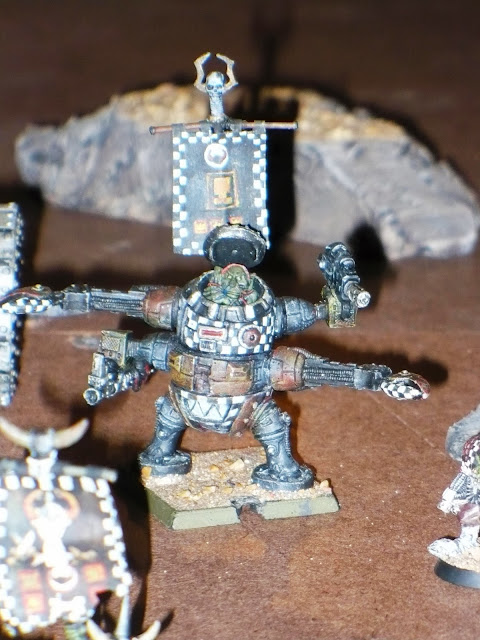 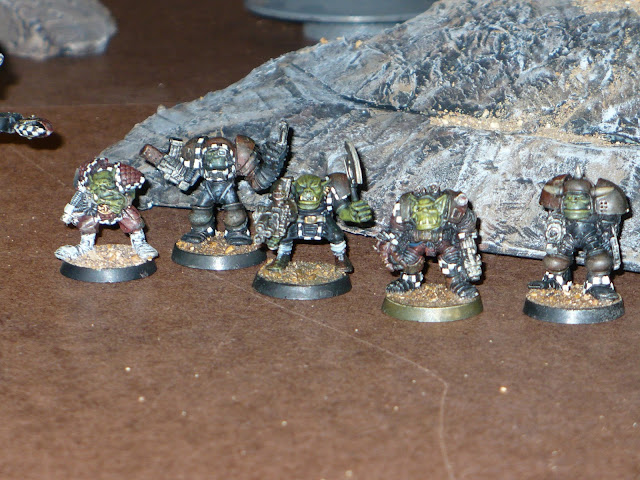 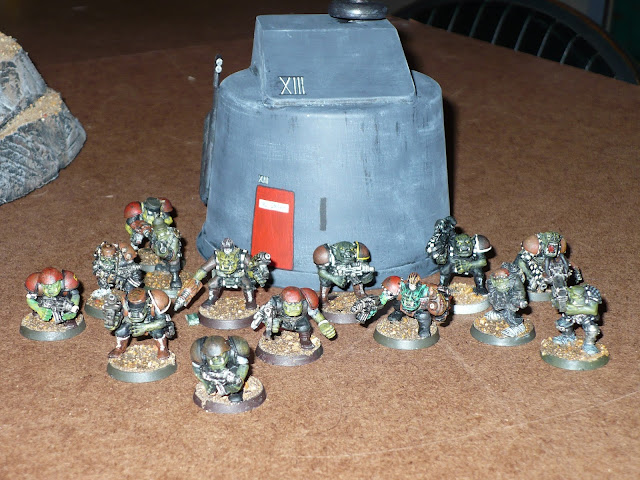 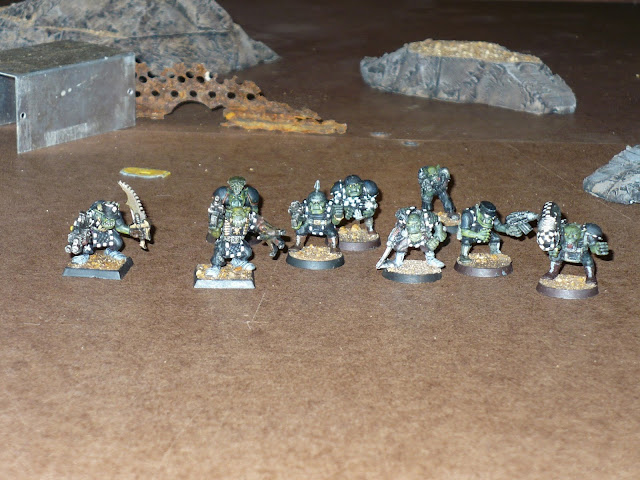 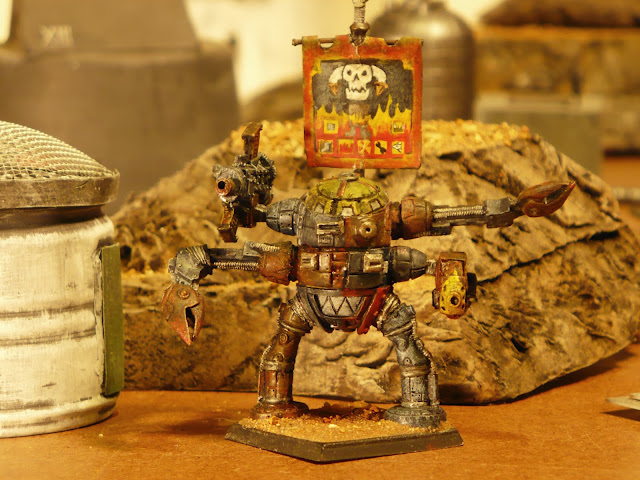 Of course, one of the great joys to this, my second army, was converting things. The observant will have noticed a gun not found in any Citadel catalog next to his Mountain Majesty. It's built up around a toy rocket launcher from a transformer, fitted out with panzer wheels, zoid gears, and a modest variety of other bits and bobs. Below you can see what happens when an ork encounters a beakie on the workbench. 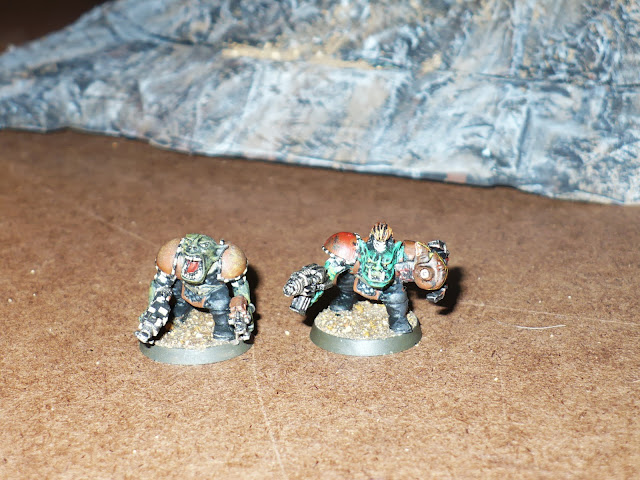 Note: my friend Mike played the blood angels. Of course sometimes even orks take to piracy. When they do Germy Warfare calls 'em Freebooters. (With a z.) 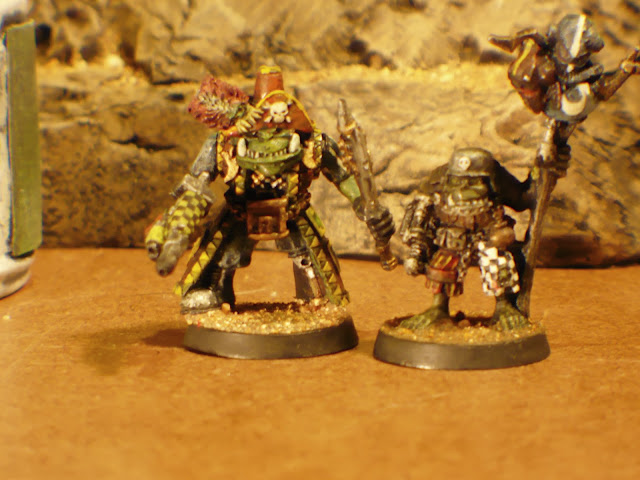 Sure, that's one of Mike's on the stick, and I confess that I had it out for the Ultramarines on general principle. But the conversions are on the Flash Git, not the banner. Other flash gitz might find themselves in possession of chainsaws from titans or just too many arms and legs: 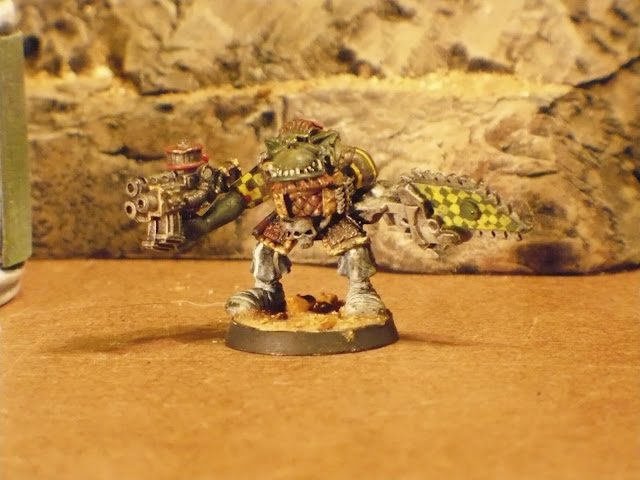 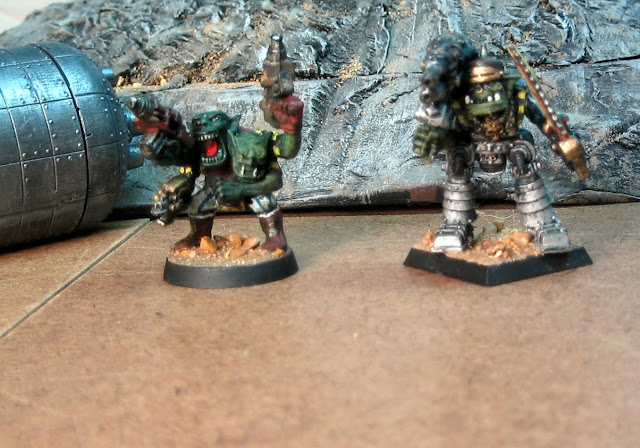 Of course the very most impressive conversions are those that are indeed meant to be conversions. Orkoid conversions. Once upon an orky time certain mad orks, mad even by the rather low standards of the greens, joined forces thus: 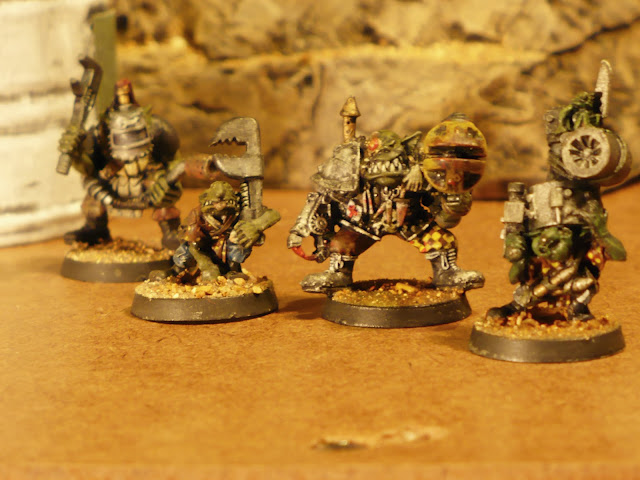 On battlefields all over the known universe they collected the bits and pieces cast off in the heat of combat, and from the detritus they assembled . . . dreadnaughts. Or perhaps dreadfuls. (Dread little and dread less, really.) Ghastly, crummy, tiny, dreadful dreadnaughts. 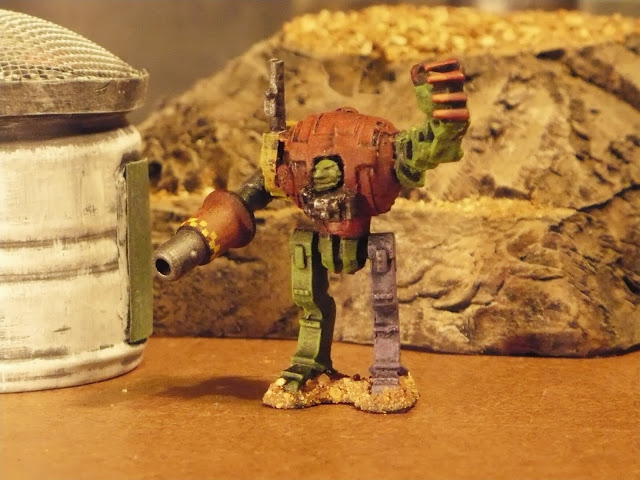 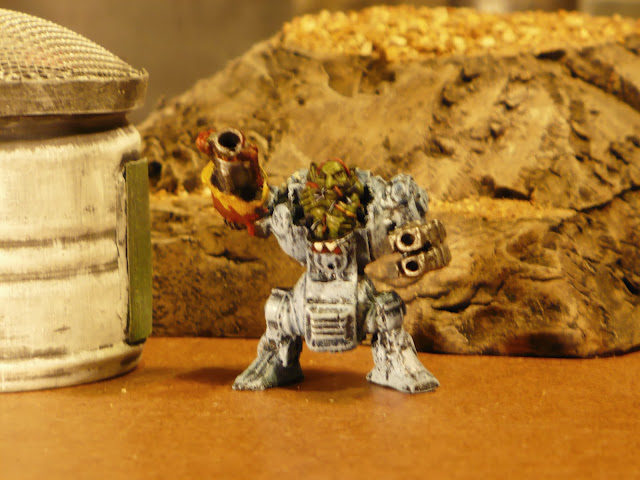 These have piracy written all over them. (Appropriate of Freebooters, yes?) Mixed in with a job-lot of second-hand orks I bought were two remarkably shoddy Imperial dreadnaughts. These were truly horrible little creatures, not really suitable for any imperial army. They were cratered and pocked from some far off battle; tired, miscast rejects. But being frugal, ork pirates can salvage the wreckage of even the most dubious armaments.

After hacking and slashing, and with the addition of titanic arms, key fobs, mecha(nized) legs and a gremlin or two they became a virtual mob of killer tin cans. (Which was how you got a lot of dreadnaughts into a Goff army back in the day.) There were even rules for the things. Sort of.

So in conclusion, by the mid nineties I had two good-sized armies: one Imperial and one green. (Or red, really. But to hear the red-staters tell it greens are just rebranded reds, ahem commies rather. So maybe this works.) More would follow later, but not until after the downfall. I like my stuff pre-heresy, thank you very much, so it was all after-market from about 1995 onwards.
Posted by The Composer at 10:24 PM