Among my other recent acquisitions you might recall mention of a modest Dutch force. This force entails most of their forces from the East Indies station. (All of the cruisers and half the destroyers.) It's a modest forced, but nevertheless one worthy of consideration. All of these are Panzerschiffe models which I detailed. I began with De Ruyter. 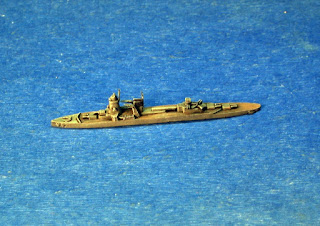 As I have mentioned before I try to use Midway as something of an anchorpoint, depicting ships more or less as they appeared as close to mid 1942 as I can get them, thus I attempted to depict De Ruyter at about the time of her loss. In this I failed rather spectacularly. I have several reference books to hand, including one specifically discussing camouflage, and I habitually refer to several websites. Initially I could find no photographs of De Ruyter later than the mid-thirties and no reference to camouflage. Later on while researching Tromp I learned that the Dutch ships were ALL camouflaged, generally in a similar pattern, and had the decks darkened with a crude oil stain. Naturally I learned all this later. Eventually I even found a picture at the Australian War Museum. I may eventually correct it, but she stands in her peacetime paint for now.

Not so Tromp and Java: 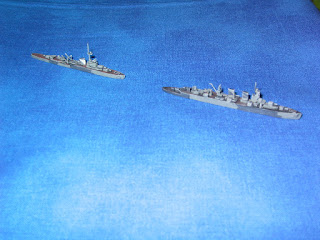 I did find art depicting Java and several photographs of Tromp in camouflage. For now, I think the former two make a very nice division.

Particularly accompanied by these two Admiralen: 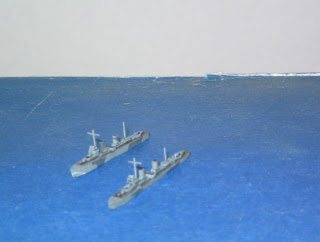 These two depict Kortenaer and Piet Hein, though all four are painted virtually identically. (All are roughly based on a picture of two unidentified Admiralen. A second picture of Witte de With appears to show a similar camouflage scheme, but is much less clear.) Again, the paint evolved as I worked, since I learned of the deck stain partway through my destroyer run, and I also failed to note the false bow wake at first. All in all, however, I'm fairly pleased. A little work will correct the problems, but for now they add variety, which is always good. I've yet to see a photograph of a large formation where the paint schemes were truly uniform. There are some rather famous pictures of large fleets U.S. warships in MS-3x dazzle variants, but even in the midst of these some older MS-21 Navy Blue creeps in.

Anyway, there we have the Dutch. Next we will look at some lighter U.S. combatants before we head on to the Japanese and ultimately the few heavies that crept in.