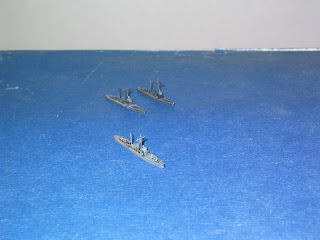 These are just the sorts of things Japan could have really used more of. Viking Forge sells them as the Etorofu class, but they serve almost equally well as the preceding Shimushu class, for which I have chiefly used them. Collectively the Imperial Navy called these two classes "Type A Kaibokan." These small but handy escorts were upgraded throughout the war, eventually boasting six depth charge projectors, a trench mortor, and a pretty decent sonar suite on a displacement of just under nine hundred tons. They weren't quite Flowers in terms of ASW, since Japan never had anything quite as nice as Hedgehog or Squid, but they were moving in the right direction, albeit with a multi-purpose military hull that cost a little too much. As the war drug on Japan began to realize that they really needed more of these things cheaper and with more and better ASW projection, so they simplified the hull dramatically, but it was a case of too little too late. If Japan had invested in mass producing cheap versions of these from the early forties the submarine war might have been a somewhat more difficult proposition for the U.S.

All or nearly all of Japan's prewar escorts suffered to some extent from one particular problem: all were capable, multi-role ships that cost too much to be economic ASW platforms. The Type A Kaibokan described above are no exception, but the next two classes might be even better examples. 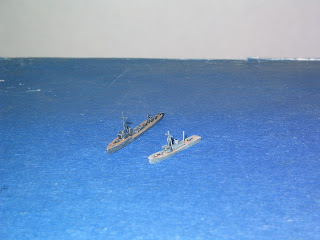 These two are the torpedo boat Otori and the small minelayer Natsushima, both from Panzerschiffe. Both were intended for convoy escort, but both were also outfitted for additional roles: the Otoris had a significant anti-surface capability in the form of several 4.7" deck guns and a triple torpedo mount, and a thirty knot top speed. Natsushima and her sister Nasami shipped over a hundred mines on a five hundred ton hull. The Otoris in particular might well have been very capable ASW escorts had they dispensed with the torpedoes, most of the deck guns, and a large portion of the powerplant. As it was they probably had too much equipment on too little displacement to be entirely satisfactory, and they surely tried to do too many different things. I suspect some of this stems from the same Japanese preference for a few very capable ships rather than many less capable ships that is so evident in major combatants. If you're planning to fight a conventional war with a wealthier opponent this makes some sense. If you need to defend against asymmetric or economic warfare (or both in one submersible package) it doesn't really work out. 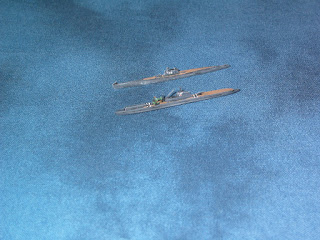 The above two submarines are different models of the same class from different manufacturers. For reasons that may be self evident I have not used them as such. At the top is a conversion of a C in C miniature, which they market as I-19. Below is Panzerschiffe's I-15. Both of these boats were B-1 types. Since C in C miniatures virtually always seem just a little smaller than their competitors (they claim that theirs are the correct scale) I have used their boat as a slightly less bulky C-1. To do so I stripped off the hangar and catapult track, cut the deck gun off and replaced it forward, and added a guard at the bow for the forward anchor of the radio antenna. I decided to use the Panzerschiffe model for I-19 since the GHQ search plane made a much better visual fit on the larger model. The catapult track is broad, making it easier to mount the aircraft, and the hangar is large enough to look plausible if quite cramped. I made surprisingly few alterations, all considered. I did add a crane, but since this is collapsible it would be quite excusable to leave it off. I changed out the deck gun for one I built up out of stock to make it look a little lighter, but again, this isn't vital. The only alteration I considered truly necessary was the addition of a pair of periscopes.

Among my new-build Japanese destroyers are these two Fubukis: Fubuki and Sazanami. 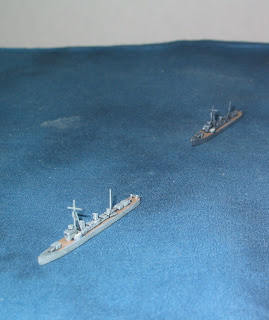 Both of these ships were quite active in the early war and both were the veterans of many battles in the East Indies, the South Pacific, and ultimately Sazanami of Coral Sea and Fubuki of Midway. Both are Panzerschiffe models. The paint is somewhat speculative and a little inexact, but attempts to portray the fact that different Japanese naval arsenals used different paint formulations resulting in quite different shades of grey, with Sasebo's being darkest and Maizuru's the lightest.

Just when I think I've got a handle on Japanese destroyers I learn that they built a quick-firing behemoth during the war as an AA escort for their carrier fleet: 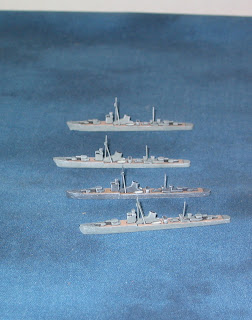 I first learned of the Akizuki class in the "Imperial Council" thread on the World War 2 Forum, www.ww2f.com. Somehow I had repeatedly overlooked them in my previous researches. They're surprisingly large even for a navy known for building large and capable destroyers; weighing in at 3,700 tons fully loaded. With eight quick firing 4" DP guns for a main armament these must have been fearsome AA escorts indeed, almost an AA cruiser. I've used yet another Panzerschiffe model to depict them, albeit with the usual added masts.

But I said I'd also built a few heavies. Admiral Takao, this one is for you: 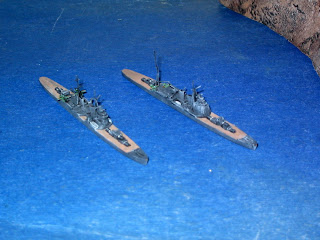 Years ago, when I built Atago, I rather fell in love with Japanese heavy cruisers. These were large, fast, sleek ships with a tremendous punch and the Takao class, with their enormous flag bridge, had an especially menacing and almost modern aspect. While Atago still looks alright, I've learned a lot since then and I put all the lessons to work on Takao (and Nachi.) Both of these are Panzerschiffe models, but I've added quite a lot of detail. You can see masts, rangefinders, secondary gunbarrels, breakwaters, aircraft cranes, anchor chain, and anchors. Most of these are fabricated from simple styrene stock. For anchor chain I use the smallest cylindrical stock I can find and crush it in a pair of pliers to give it a corrugated surface that looks chain-like from a distance. The aircraft are GHQ details and the ship's boats are C in C. In order to get the appearance of boards I run deck brushstrokes in parallel, painting a light wood color over black. I typically allow a little black to show through this second coat. When you drybrush a light color across the direction of the brushstrokes it actually makes the "boards" pop out just a little and it can be quite convincing.

The last new ship I'll discuss today is Ise, which you will see in the forground of this picture: 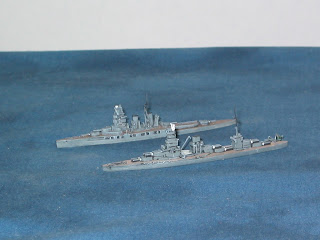 This is a nice study of what can be done with a Panzerschiffe model and some patience. For comparison I've placed Ise in front of a C in C Kongo I painted up as Kirishima several years ago. When I first bought the C in C miniature it left me somewhat dissatisfied with my (increasingly large) collection of Panzerschiffe miniatures, but I have more time than money, so the best solution for me was to find a way to make what I had look better. That's when I started trying to find a way to add deck details. It's taken a good couple of years and a lot of practice, but I think you can see that it's paid off. I think my simple Panzerschiffe Ise looks entirely presentable next to the C in C Kirishima. (To which I have also added a mainmast, to be completely fair. I haven't been content to build a model as-is in years.) Ise had the complete treatment described above plus radar. Apparently she was the first ship in the whole of the Japanese Navy to carry air search radar. A very handsome ship, if I do say so myself.