Here's a somewhat special moment: a back to basics moment. I started blogging to write about music and got carried away with gaming instead. I do not wish to lose my sci-fi chi, but events can sometimes catapult you back to places you'd forgotten. This is one such case. For some reason I feel as though those of us who appreciate that magical spot at the end of the rainbow where we can feel welcome need some music to march to. We have a long walk ahead of us. In fact, a friend asked me to write some walking music for just that purpose.

I'm not really by nature a pop song composer. I'm a fugue and symphony guy, so I have to venture into slightly unfamiliar territory to do this. I've done a few before, but not whole heap tons of 'em.

So this last of week or so has been something of a learning experience. Not only have did I write that walking song, but I also made some demo-ish recordings of it and several other popular songs that have been sitting on the back burner. First, let me give you a glimpse inside the Empty Pocket Studios . . . 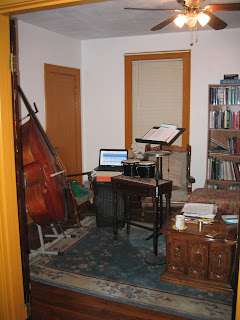 Please note carefully the expensive recording equipment dangling off the music stand. If it looks like something you might see someone wearing in your finer Midwestern truckstops, it is. It's the headset off my low-budget smarty phone. And the cymbal is the same frying pan lid I played when I was four or five and climbing in and out of my mom's kitchen cabinets. Yeah, the instruments are real enough, and yeah, they mostly cost more than a microphone, so maybe my priorities are misplaced, but . . . well . . . whoopsie daisy. Emptied my pockets buying things that make noise and had nothing left for things that detect noise. 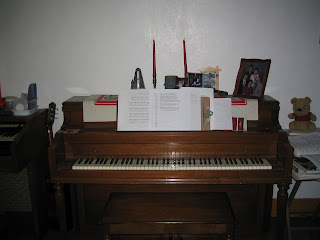 So I started last week off making recordings of a couple of older things that I've wanted to render more presentable for one reason or other for a long time. The first was originally intended for a radio play that has, thus far, remained unproduced. It was somewhat easier, as I let my computer do all the complicated instrumental performance work and I just sang. The second was more adventurous as I decided I wanted to play it myself.  That's where the frying pan comes in. (It will be back later.) This one is a very odd bit of fan service: a song for a band called Mushrööm Klöwd.

but we're here to talk about protest. I'll try to given them proper posts of their own later. Anyway, I'd been struggling with what to write her until I looked over at my wall. This is a painting from a friend of mine, Kerry Hirth, called "The Unfortunate Rake." (Which could well be me at several points in my life, but Kerry insists there's no symbolism to it. Fortunately, my progress has led me on a path that's at least tangential to Bedlam and not directly towards it.) 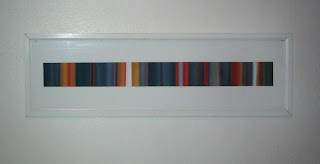 Kerry has an interesting way of sensing the world around her. She strongly associates colors and harmonies. She can see the colors in a piece of music. This is a form of what's called synesthesia. I don't want to get into the technical woods here, as it's complicated, not my specialty, and there's quite a bit of debate anyway. Suffice it to say, however, that while somewhat rare, that's quite a history of it among famous artists and musicians alike, and Kerry uses it as the basis of many of her paintings.

But I'm not one of those synesthetic artists. I appreciate where she's coming from, and I'm darned interested to see what she sees when she hears my music, but to me, it looks more like an odd rainbow, or perhaps an identifying code on a box car (since I also like railroad stuff) than music. And trains are music to my ears, actually. So that's not inappropriate. But it was the rainbow that struck me the other day. I looked at it and I thought rainbows. (This will come up again. I have a couple of rainbow projects in mind Oldhammerishly speaking.) And the line "The colors of the rainbow are hanging on my wall" indelibly lodged itself in my head. "The colors of the rainbow, don't ever let them fall." (To which point I suppose I ought to stop running around like a wild thing in my living room . . . but they're secured up there with the big nails, so hopefully that isn't too big a risk. And if a pair of ten pennies aren't enough I'll break out the railroad spikes.)

So there it was, milling around in my noggin, the beginnings of a song about rainbows. That's always a good start. Of course, my wall was a little specific, so I worked to generalize the chorus a little better and wrote some verses for the specific stuff largely cribbed from the life stories of friends with some small artistic license: the raft episode was wholly local, I believe, and I know not the precise amount of shiny yellow that was provided to the smugglers. But the stories are mostly painted in pretty broad terms that would doubtless be similar to lots of folks. (Actually, the trawler business probably applies to several of my friends, come to think of it. Honestly, everything but the raft episode is pretty general, and that's the one I changed the most anyway.)

But without further ado, let me present to you the "Rainbow War Song":

When I was a young man I felt I walked alone,
A shining spot of color in a world of monochrome.
I fought to be my own man, to sing a different tone.
Little did I know then of the shining rainbow home.

Chorus:
The colors of the rainbow are standing proud and tall.
Each color of the rainbow, don't ever let one fall.
Let the people of the rainbow sing of peace and harmony
Know that if we march together our colors can be free.
Each person of the rainbow has a place inside the whole.
We will carry one another to reach our rainbow goal.

My friend, she was a young girl trapped inside a stranger's skin.
The preachers at the churches told her changing would be sin.
But she found the rainbow nation and she learned a different way.
The great big rainbow family had a different way to pray.

Let me tell you of my old friend and his tremendous craft;
To escape from fire and flooding he built himself a raft.
By the light of our great rainbow he sailed across the sea
To a land of milk and honey he builds with you and me.

The young woman fled the jungle where the war had taken hold.
She paid the price for transport with eight pieces made of gold.
In the belly of the trawler she was smuggled 'cross the sea
To the shining rainbow nation where her colors can be free.

There is, of course, an audio version recorded by some half competent singer and pianist. (Maybe even three quarters competent if he would ever practice, but he did not.) This is really just demonstration grade stuff, not actual performance grade. Empty Pocket is largely empty of sound equipment, so I didn't invest that much time in the recording. The idea is to get this piece at least out there so folks as need it can use it and perhaps add their own verses if they so choose.

Anyway, so that's my last week or so. Thank you for listening.