Things have been quiet around Tartarus lately, but there have been a few new arrivals. Some months back a talented Spanish artist released his contribution to the growing Oldhammer hobby into the wild as part of a project called Space Riders. This was the first kickstarter I had the pleasure of backing. Things got a little hairy, what with the intercity move and some familial complications, but I've finally had a chance to brush up a few more of them. To refresh, the first member of this set I painted was the "Reptyle Centaur," who joined up with my crocs in a post called Reptiliad Revolution. Now he as a few friends . . . or maybe enemies. Frenemies with benefits? (It can be so hard to tell out in the wilds. Enmities can dissolve quickly in the face of a sand cyclone. And alliances even quicker.)

Recently arrived on Moab III are two particularly dangerous looking characters. The first, Tommy Takara, has used many aliases over the years: The Max, Angel Max, Max Power, and Max Engel. Takara landed at the starport about a week ago. Rumors have it that he's chasing some kind of Imperial bounty, though how far Imperial papers will get him is a matter of some conjecture. 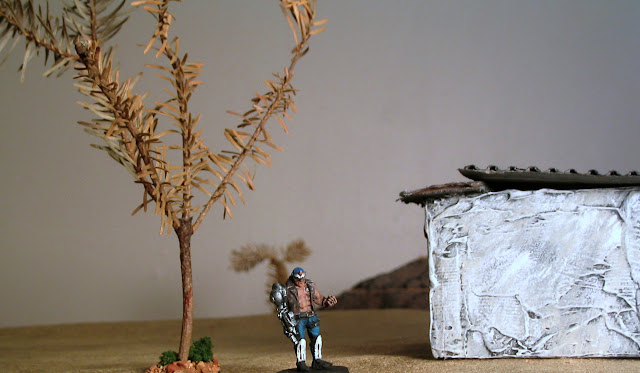 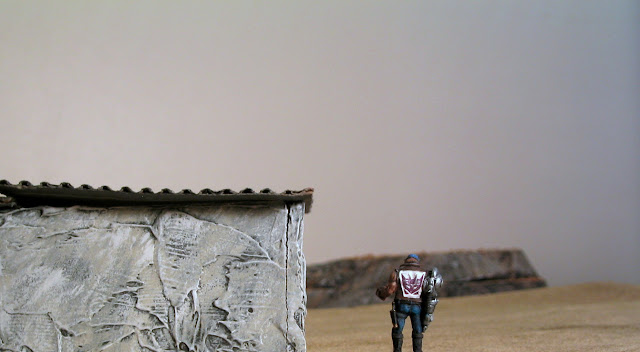 Takara is a large man, noteworthy for mechanical prosthetics reputedly bequeathed him by the Martian Tech Cult. (His lack of official status has led to some suggestions that he was either born to someone from or himself enslaved in the penal test corps; the so called test bed slaves.) Even without the militarized limb he has the appearance of a powerful and aggressive human.

At almost the same time a tall orcoid called Gobbrott landed somewhere out in the wastes; reputedly also chasing bounty, though probably not for the Terrans. 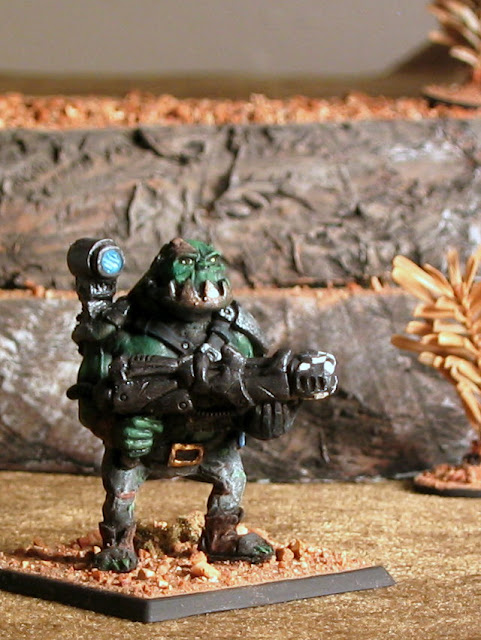 His friends, such as he has any, usually call him Gob or Gobber. Equipped with a variable dispersion plasma rifle and a high intensity arc tracker he can be a fearsome opponent. 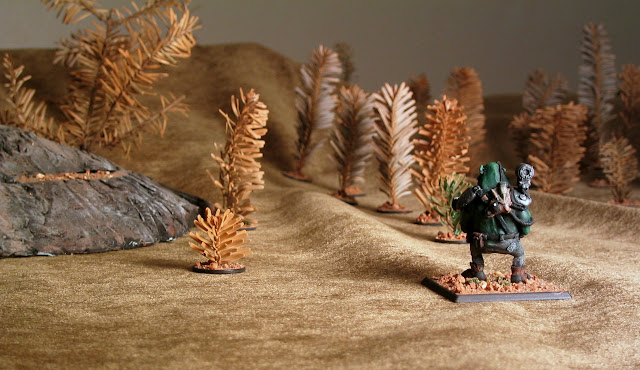 Adding to the strange and troublesome news from space comes a sighting from the ground; the giant Hulkus umberei. 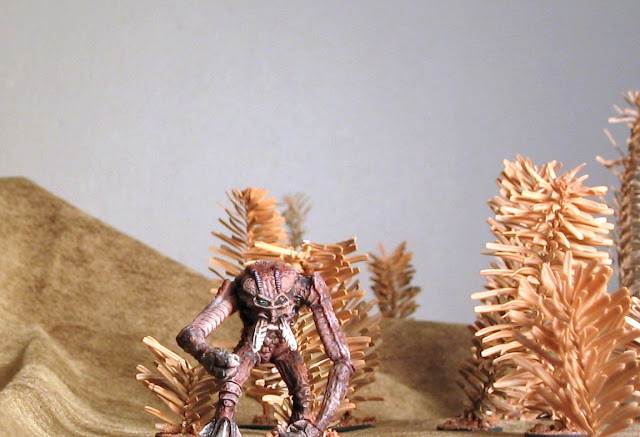 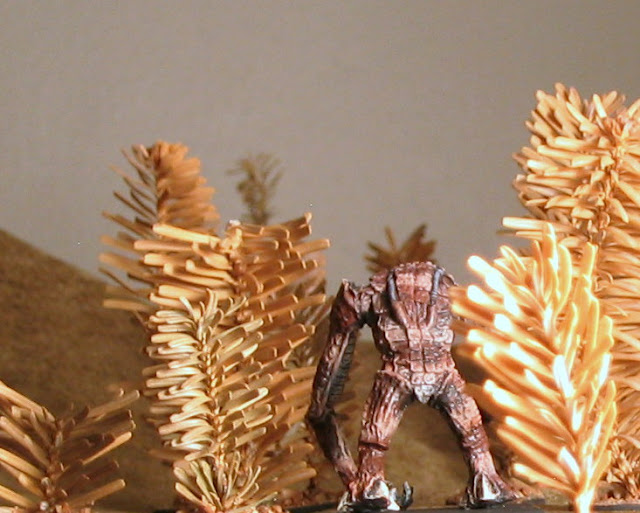 The Hulkus umberei, or ambler, is a semi-bipedal omnivore that has spread from coreward to many rim worlds. Their hardy desert metabolism has served them quite well in the galaxy's many hot and arid zones. Bull amblers stand from two to three meters at the shoulder and cows have occasionally been recorded with heights in excess of four. While slow appearing these giants can move quite quickly for short bursts, not unlike many cold blooded Terran species. The hulks are also fairly intelligent animals, occasionally fashioning  simple tools from logs and boulders. On some planets entire groups of amblers, called tanks, have passed missile weapons from generation to generation; using it as their principal hunting technique. Given their prodigious mass it is doubtless evident that these are not creatures to be trifled with.

How the hulk arrived on Moab III isn't precisely known, perhaps a collector brought one or several for a private menagerie and it escaped into the wild, but once established the creatures are virtually impossible to eliminate. They spend much of their life burrowing underground and hunt by detecting surface and subsurface vibrations, so traditional chemical and biological means of control are often ineffective. Trophy hunting has been known to help to some limited extent, and their flesh is a fairly prized delicacy . . . to those hunters able to catch them.

One final new arrival: a Ramshackle fellow known to the Rim as Gordon Frei. 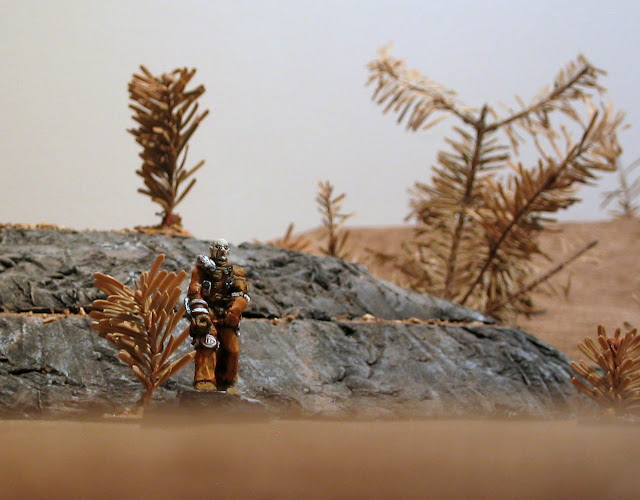 Frei has been floating around the galaxy a long long time. Precisely how long is uncertain. He has considerable notoriety in technical circles. Some sources suggest he is a rogue mechan fleeing the Martian Tech Cult. Others claim he has never had any association with them, coming instead from Terra. Still others suggest a much darker origin; that he stepped out of a mysterious warpspace rift and that he preaches a terrible gospel of liberation. Whatever his history, he appears to be fleeing an Imperial warrant. Given his pallid and deeply scarred appearance the likeliest explanation is that the Imperial Cult regards him as some kind of dangerous mutant. He is also rumored to posses, alternately, either psionic abilities or alien or archaic technology of mysterious power; usually described as a variant of a graviton projector. There is no official record of his arrival in Logansport, but reliable witnesses have placed him at various locations around Moab III, primarily on the outskirts of the capital. More recently he has dropped out of view. Perhaps he has found transport off planet or maybe he is taking refuge out in the wastes.

That about sums up the recent news from the Tartarus Rim. As always thank you for listening. Hopefully there will be more very soon.