The Battle of the Coral Sea

Seventy three years ago the world witnessed a rare and bloody revolution: the world's first carrier battle. In some sense this is a bit of a technicality. It wasn't remotely the first battle employing carriers. That had occurred some thirty years prior. It wasn't the first time aircraft attacked a ship at sea. It wasn't even the first time both sides in a battle had either aircraft or carriers. (Though it might have been the first time both sides had both.) But it was the first time two relatively closely matched opponents each fielded carrier borne aircraft as their chief offensive elements. It was, in that sense, the first battle between carriers, which makes it something of a watershed event. A few weeks back a friend of mine challenged me to post a series of photographs of miniatures from my collection. In doing so I chose in part to depict this battle. Here follows my most recent foray into the field of not so special effects: 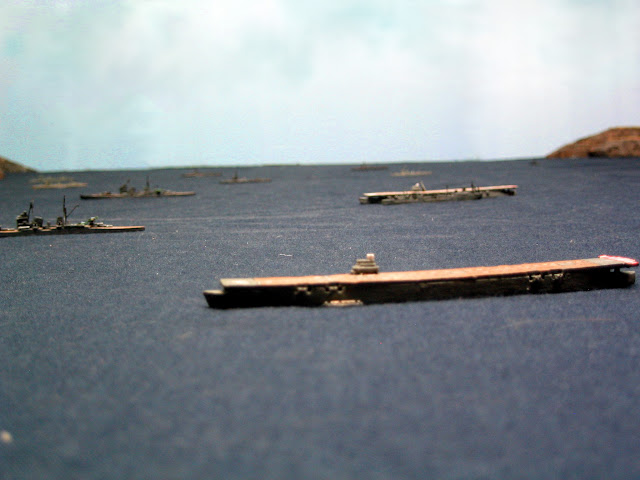 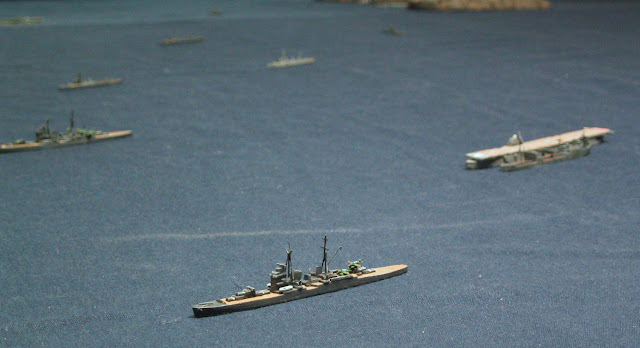 Elements of the mobile, support, and occupation forces are visible in the background as well as local guard and support forces.

USS Lexington is hit by two Japanese torpedoes. A Shokaku B5N  from Lt. Ichihara Tatsuo's section can be seen escaping north with an F4F in pursuit.

The same event as seen from USS Minneapolis. A second B5N, presumably from the same section, is visible to the right, above Yorktown. The aircraft behind the torpedo splash is most likely that of Ens. Leon Haynes of VF-2.

TF-17 as seen from an unnamed D3A. A number of fighters can be seen spiraling in the center of the picture and a D3A is in the foreground at lower left, probably that of strike leader Lt. Cdr Takahashi Kakuichi 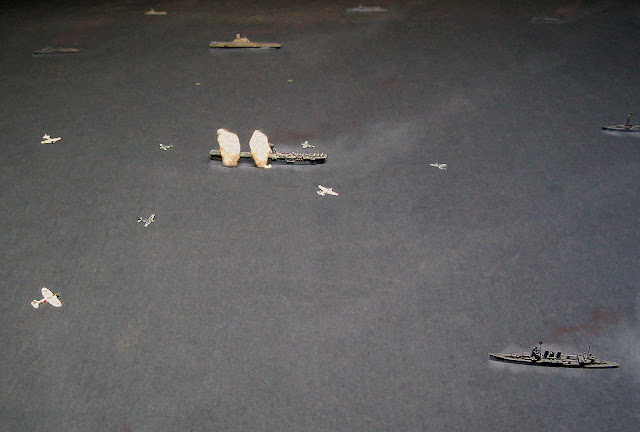 Much of this is at least a little speculative, of course. I don't have the positions of the Mo forces at Truk preceding the battle, nor is my hastily constructed harbor an accurate representation. The positions of ships in TF-17 are as faithful as I can make them with the information I have. The aircraft positions are more speculative, but represent things approximately as they might have been at about the moment of the attack. All of these I must credit to John Lundstrom's First Team, though the mistakes are my own. I probably have Haynes pursuing the wrong aircraft, but he was indeed chasing a B5N attempting to make good its escape.

The fighters circling in the foreground are four F4Fs piloted by Lieut. Fred Borries Jr, Lieut. (jg) Marion Dufilho, Lieut. (jg) Clark Rinehart, and Ens. Newton Mason along with a pair of Shokaku A6Ms (the leading element of six Zeroes about to fall on the F4Fs.) Borries and his squadron mates banked left into a maneuver called a "Lufbery circle" in a vain attempt to continue climbing after the incoming dive bombers. They quickly found themselves outnumbered and unable to escape the nimble Zekes. The timing of this fight might be off a little, but the formation is so famous I wanted to include it. (It would ultimately number some eight A6Ms and five F4Fs with another American pilot diving away nearby with yet another Zero in hot pursuit.)

The sharp eyed might note that the markings of the involved aircraft are incorrect, as all are models attempting to depict a different battle about a month later. But at this resolution that's hard to see so I hope it's forgivable. Lex's quite visible deck park is another slight anachronism that I wasn't willing to modify for a photo shoot. At the time of the attack her decks would doubtless have been clear.

So there you have it. This is all a little crude, but I don't think it looks too bad. I hope you enjoy it. Here's  to the brave men who fought to protect their countries and families that day. You are not forgotten, nor have your sacrifices been in vain.