Merchant Ships of the United Nations

The latest arrivals at the fleet review are the several allied merchant ships depicted below. First, we have King Edwin: 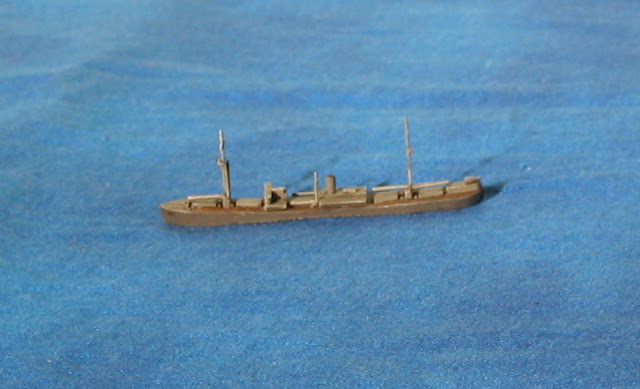 King Edwin is a Dodd motor ship built by Harland and Wolf in 1927 with a gross registered tonnage of 4536. I've depicted her using C in C's Doxford. This particular casting is perhaps a touch plain but with a little work it comes out nicely. And it's size and style were fairly common. Further, in some ways a simpler casting affords more opportunity for conversion. I haven't really done that yet, but more might come later. I regret that I didn't add ship's boats, but perhaps I can rectify that.

Next we have a pair of takes on a casting sadly no longer in production: the original C in C "tramp steamer." 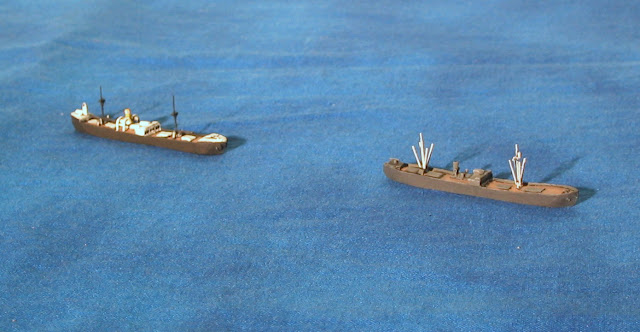 Why C in C replaced this model I'm not certain, but this is the older version, which differs quite a bit from the current casting. Leading the column is the Harrison steamer Daytonian: built by Henderson in 1922 and registered at 6434 tons. Trailing her is Fort de Douaumont: a Doxford ship of 1918 built as War Deer, purchased by Chargeurs Reunis, and registered at 5266 tons. In spite of the difference in tonnage, the two ships are nearly the same length and beam. Likely the newer ship gained cargo capacity through improved engineering, reflected also in a higher cruising speed, and slightly increased draft. Both are single screw reciprocating steamers, but if the newer ship has higher pressure boilers (which she doubtless does) then she should be able to achieve the same results with less boiler capacity and less fuel.

Next up, let's move back across the channel and convert a Panzerschiffe casting:

I've used this typical large freighter to depict an Ellerman liner built by Cammel Laird in 1935: City of Manchester. She was a twin screw turbine with a registered capacity of 8917 tons and even some passenger accommodations. (Though I'm guessing not many.) Panzerschiffe castings are, of course, a little simpler, but that leaves a lot of room for customization, and the resin material is in many ways easier to work with. It doesn't bend as badly as white metal and it's easier to cut and file. All in all I really love these guys, particularly for merchant ships, where customization adds so much to the dizzying variety out there.

Another interesting conversion is this small sidewheel ferry: 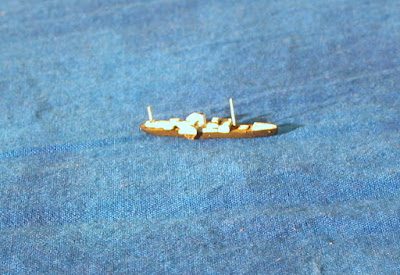 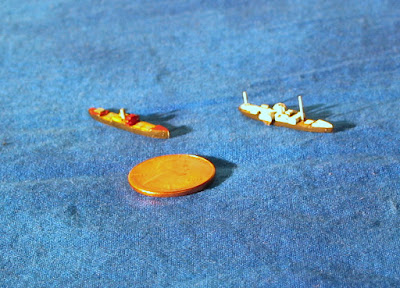 This is yet another casting whose provenance isn't quite known to me. I picked her up second hand. From earlier research I'd surmised it to be a 1/3000 Navwar "A/B Standard" merchant, but I can no longer find my reasoning for that. In any case, it's quite small. Above you can see an unmodified casting next to the one I rebuilt as a paddle wheeler. I'm using mine to depict a P&A Campbell ferry built by McKnight in 1891. Campbell operated across the Bristol Channel and Ravenswood continued in service with the company until 1955, when she was scrapped. I probably wouldn't have set out  to depict a small channel steamer, but given the yeoman service all variety of small ships and boats gave, and the commonality of such vessels in coastal service she seems a nice addition. (Ravenswood remained in civilian service until the suspension of the ferry in 1940, after which she was eventually taken over as an AA vessel.)

Next we have another coaster, this time converted for military duties. This is the French "landing ship" Golo as depicted by Seabattles and sold in the U.S. by Viking Forge: 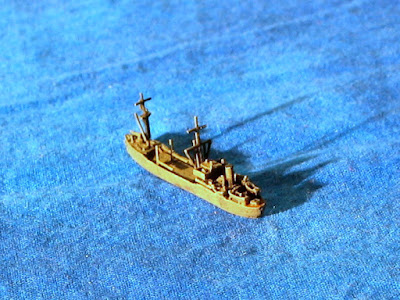 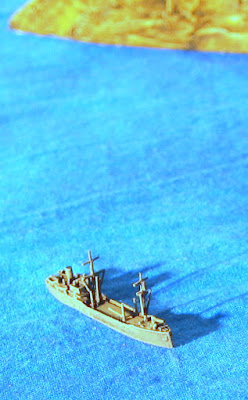 In terms of sheer casting and sculpting quality, this was one of the nicest ships I've had the pleasure of modeling in the scale. I added masts, as you can see. There are small pinholes that lead me to believe the Seabattles castings might come with such fanciness, but the domestically produced Viking Forge copy omit them. Even so, this is a nice little ship, and it's no great thing to make some masts out of rod.

Finally, we have the whole gang mustering at an unnamed tropical port on the way to the fleet review. Looks like a little bit of paradise.

As always, thank you for joining me. If you like what you see here check back soon. I plan to post on converting Fort de Douaumont soonish, and there will eventually be more footage of the fleet review.