To War on a Japanese Liner

Just prior to WWII Japan had one of the largest and most modern merchant marines in the world. Military subsidies and government support kept the major ship-builders busy constructing fast new liners and tankers by the score. During the war most of this shipping was taken over by the military and subsequently sunk. If you want to game WWII it's instructive to examine the brief but interesting period between impressment and loss. Several of my newest endeavors have been of this sort, including two ships bought from Viking Forge: Asama Maru and Hikawa Maru. 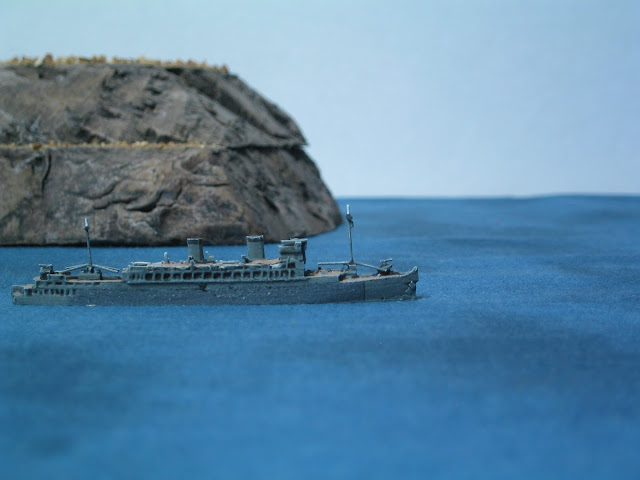 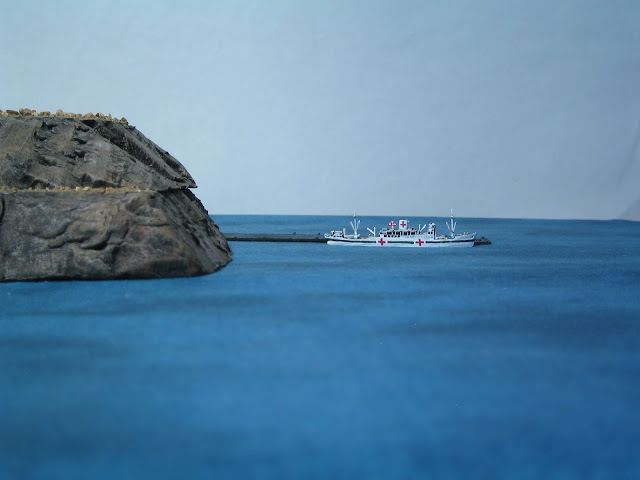 These are two of the ships Viking Forge casts for the Seabattles line; a very nice line of well sculpted models of generally smaller warships, merchants, and auxiliaries. Hikawa Maru is particularly interesting, as she is one of the very very few Japanese merchant ships to survive the war (the large red crosses no doubt helped) and one of the only Japanese ships of that vintage (merchant or otherwise) still afloat today. She's now a museum ship, which is a rare enough state. It's particularly nice to see a ship more typical (and less glamorous) than the Missouri or Queen Mary preserved and open to the public.

The variety of both generic and specifically Japanese merchant ships available in 1/2400 is impressive. With some careful conversion it can be made even larger. To wit, let's look at three merchant ships from as many suppliers: 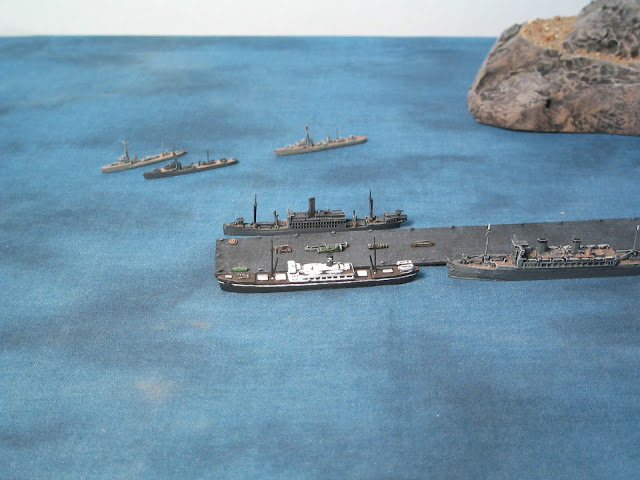 In the above photo the two models in front of the pier depict OSK liner Buenos Aires Maru (in civilian colors) and NYK liner Asama Maru (in two-tone grey.) Behind the pier is a model of another NYK liner, Hakusan Maru. The three ships are from Panzerschiffe, Viking Forge/Seabattles, and GHQ respectively. I invested a similar amount of work in all three, building masts and adding details to each. (Even the GHQ ship). Each has advantages and disadvantages, but to my mind all three look pretty good together. For the price, Panzerschiffe is the only way to go, but their variety of available merchant ships is not endless, so if you want a more colorful fleet without scratchbuilding it other suppliers are also useful. Typical Panzerschiffe merchants run $3-4. Viking Forge merchants usually run about twice that, with larger ships costing somewhat more. GHQ merchants run anywhere from four to six times the price of Panzerschiffe, thus making up the smallest percentage of my collection. Even so, some of their ships are quite pretty and I'm willing to shell out every once in a while.

In addition to the companies above, C in C also casts some fine merchants and Viking Forge has some in house sculpts, which you can see below compared to one of the Seabattles ships and a different Panzerschiffe liner. 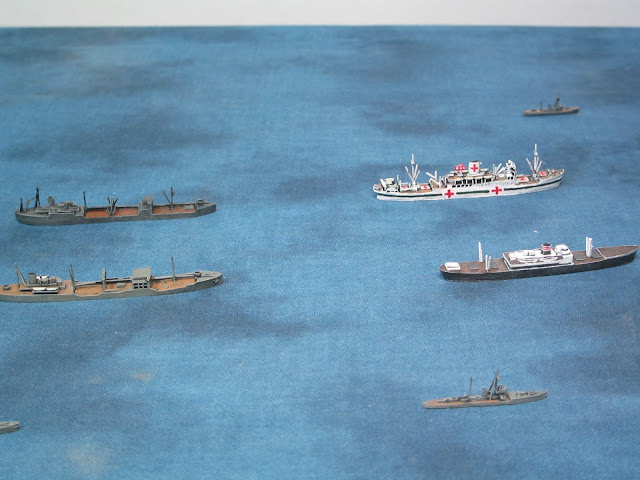 The two tankers at the left are the Viking Forge and C in C models. Both depict "Kawasaki" type tankers taken over as fleet oilers. Both have had masts added. The Viking Forge model (in the rear) has also bee armed and generally militarized. The Panzerschiffe model, foreground on the right, is older work which I did more quickly and with less research or detail, but even so I think it makes a nice addition to a convoy. The escort in the foreground, sold as an "Etorofu" type escort, is another Viking Forge house sculpt, though a much more recent one than the tanker. Their new work is really quite good, fully up to the standards of C in C or GHQ.  The masts are added, but it's a nice little model even without them. The detail is crisp and the casting is clean. (Cleaner, in fact, than most of their Seabattles casts.)

One final option for 1/2400 merchant ships is available through Panzerschiffe. In addition to the ships in their general catalog they sell a number of "merchant groups." This is a sort of "budget" line that seems to be specifically aimed at convoy gaming. Where a typical merchant might run $3, these generally run a little less than half that, though you must buy them by the group. Each group is $20 and most contain about eight ships. (A few have more and one has seven.) Below are two ships from MG-7 next to the VF/SB Hikawa Maru.  These are less detailed ships (and I have added less detail) but even so, they can serve to flesh out a convoy nicely. (And I think if I invested the time they could look quite nice.) And if you want simple markers in which you don't need to invest the effort of painting, these little merchies, like all Panzerschiffe, are cast in grey and could be used for a game straight out of the box. 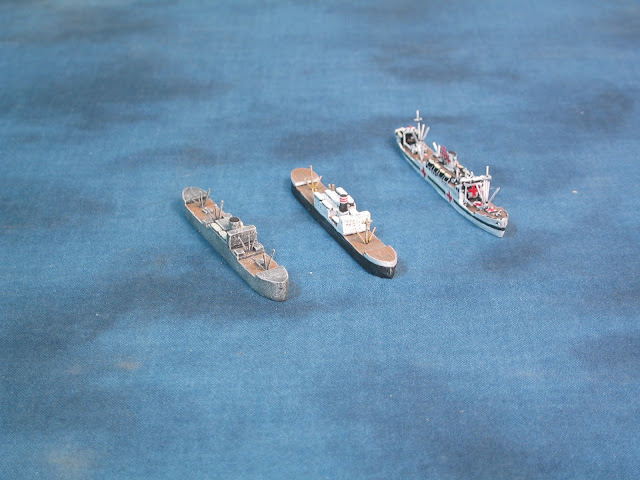 If you want to specifically model merchants and auxiliaries 1/1200 might possibly serve you better, but for wargaming the variety of models available in 1/2400 is, I think, quite suitable. There's a little something for every budget and every skill.