Early on in the year of Papa Nurgle's (tm) Plague Rat Special I had the grand ideas of running a campaign. There has clearly been some tension between his High Holiness the Emperor of Space (or at least his closest advisors) and the provincial governments way out on the northern frontiers in and around the Tartarus Rim. And so the orbital shipyards here in Vide Poche set about the task of both creating and responding to this threat. (Always best when you can work both sides of an equation. At least until the Empress of Everything looks at the bottom line of not one, but two astral building programs.)
But it turns out that I am still somewhat of an extrovert. Summer has been the hard season for me for a good ten years now, but 2020 . . . well, it's been special. And extroverted musicians locked in their homes get even more melancholy than usual, which means they get even less done. Thankfully winter still provides some relief. There is light at the end of the tunnel. And in the meantime there are at least some spaceships that I got done in the Spring before I crashed and burned a little. 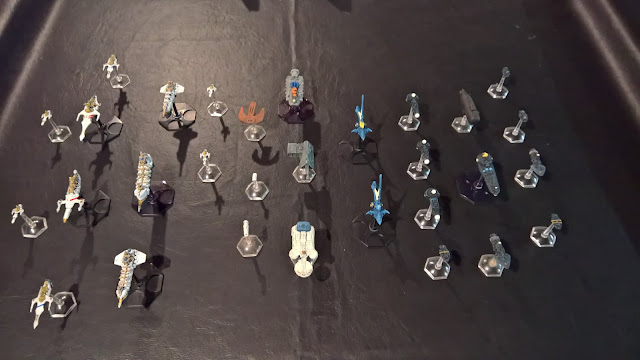 So to get things rolling again I set about adapting all that loveliness to a nice set of fleet-scale space combat rules. Most of the miniatures above were, of course, either crafted for or adapted to GW's 90s space combat game Space Fleet. (The ships on the right actually owed their origin to an earlier company whose molds Citadel bought at some point. This wouldn't be their habit later on, but it's not uncommon for smaller miniatures companies even now.) But me, I like Ground Zero's Full Thrust. I've been playing it forever, albeit intermittently. And it's a pretty simple and elegant rules set. It plays fast and clean. So why learn a new one?
*whisper whisper*
What, you say? People expect Gothic Battleships and Ironclads to behave certain ways?
*whisper whisper*
And to recreate that in another game you're going to have to at least minimally understand how the first one worked?
Well, shoot. Okay. I'll at least read the original ship data sheets and see what I can learn before I make my own cards for another system.
. . . . .
Thus did I set off on the long journey of learning at least a little about an ancient GW game I'd never once played in order to halfway knock it off in a different game system with a remarkably different philosophy of how things should work; to stitch the materials of a dark space comedy into a light space opera. Space Sondheim meets Space Mozart, if you will. It can be made to work, but not without effort, compromise, and some understanding of those original materials.
First, I had to learn the Sondhei . . . I mean Space Fleet. And what I learned was weird and quirky. Everything is a different speed. Everything has weird abilities. I sketched things out, realized everything was wrong, read through everything again, sketched everything out again, and still screwed it up. What you see below is about the third draft . . . and it's still wrong. But it's at least a gameable wrong, so we have a start. With second draft stats I set about making first draft ship sheets. Which were of course wrong. And not very sexy. So I fixed them up and sexed them up and arrived at something almost usable. 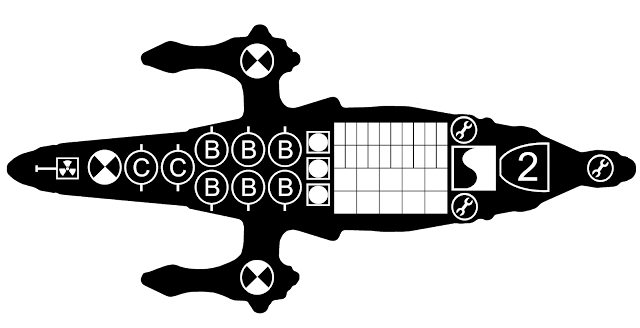 In the end I decided that sexy wasn't as important as legible for gaming purposes. Stark black silhouettes look great on a computer screen, but they don't work as well when you're crossing things off on a sheet of paper. So I went back to an outline version (albeit a somewhat improved outline) and arrived at the third/fourth draft you see below. It's still not perfect, but it works. It should make good sense to anyone familiar with Full Thrust. Further, it should incorporate some of the odd quirkiness of Space Fleet. (As much as I can preserve.) 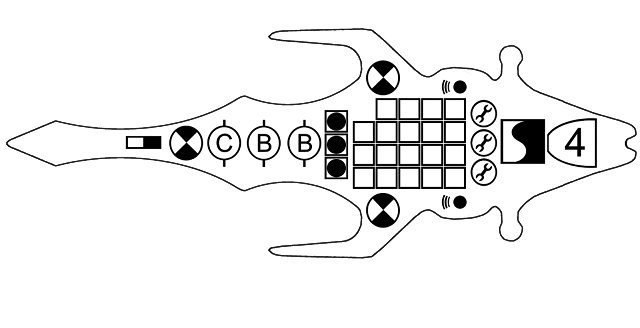 The eventual goal is to pit an enormous, but ancient and ossified space empire against a bunch of upstart frontier rebels with new ways of thinking and possibly fighting, but with much more modest resources to project their ambitions of self-determination. (We will studiously avoid considering the process by which the upstart rebels become the ossified empire until an as yet unspecified future date. Wash, rinse, and repeat.) But first you have to have rules that work. And what better way to test them than pitting some related ships of known capability against one another? By that means we arrive at the tableau you see below. Actual dice were rolled. Ship data sheets were printed on real paper and marked up with real pencils as imagined laser fusilades were exchanged at decidedly sub-space distances.
And I got my tousche handed to me. How does that always happen? You might get the idea that I'm a lousy tactician, but I prefer to think I suck at dice. I'm going to chalk it up to my opponent having Old Ironsides front and center there. I drew Ye Olde Gothicke Novel. Didn't stand a chance. ;-) 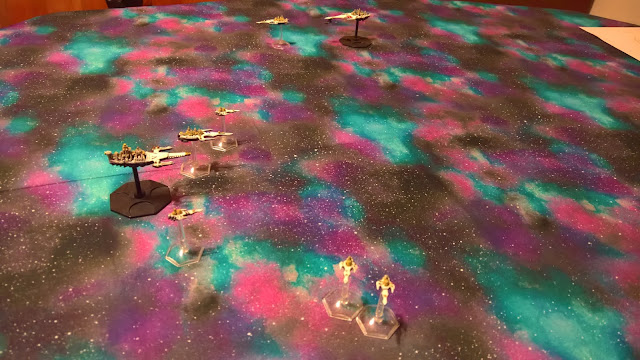 I expect more will come later. Jay Bobson, my friend and erstwhile sparring partner, has bought some new spaceships. As have I, as it happens. And we hope to try out ideas for fun and mayhem as we are able. And maybe even game out that conflict between the Spaceish Armada and the Plucky Frontiersmen. Thank you for reading along. Until next time!
Sincerely,
The Composer
Posted by The Composer at 3:49 AM