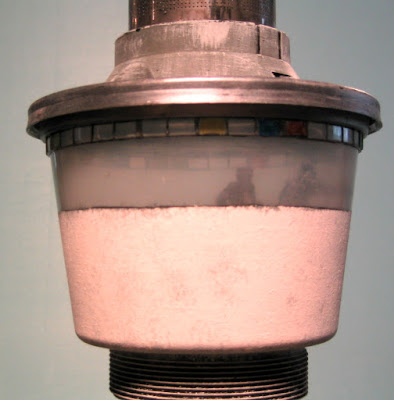 Once in orbit over Moab Colorado beamed off a quick coded message. "Well, with luck that will do," she muttered to herself. Once she'd made planetfall she found Captain de Bayamon awaiting her at the spaceport.

"Think nothing of it, Madame Rex-Avis. You've always been a great friend to the corps. What can I do for you?" the tall man replied.

"Would you be willing to join me long enough for a cup of coffee and a quick bite? It's a somewhat complicated matter and it will require explanation."

"Of course. There's a staff car waiting for us in front of the terminal. Follow me." 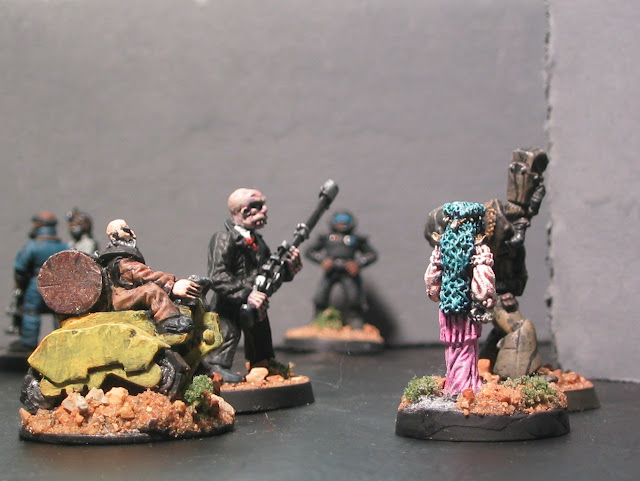 A brief ride found the two at a small Rex-Avis shipping office not far from the port. Once seated and adequately supplied Colorado unfolded her story to the captain.

"It's an agent of the Inquisition," Colorado began delicately. "He's followed us from the trade mission to the Kingdom of Colores, and it was he that attacked us."

The captain looked both surprised and relieved as he nodded for Colorado to continue.

"In fact, I'd like to secure his passage back to Terran space myself . . . once we've had a little while to clear up a point or two."

"In that case I think I can help you," de Bayamon interjected. "I've no objection to feeding my blood to the sands if necessary. Or my men. But it's not something I'd wish to do lightly. Where does Commodus stand on this?"

Rex-Avis produced a document from a pocket inside her flight jacket. Captain de Bayamon examined it briefly, little expression touching his sunburned features. He returned it and replied "Well, that settles it then. So long as the Proconsul approves I'm bound to assist. I am at your command, madame."

Meanwhile on Blanding Agent Sophie of the Kingdom of Colores and Rex-Avis chief advisor Sir Stanley watched as Inquisitor Guimar and his growing retinue debarked the train at a tiny frontier airstrip. 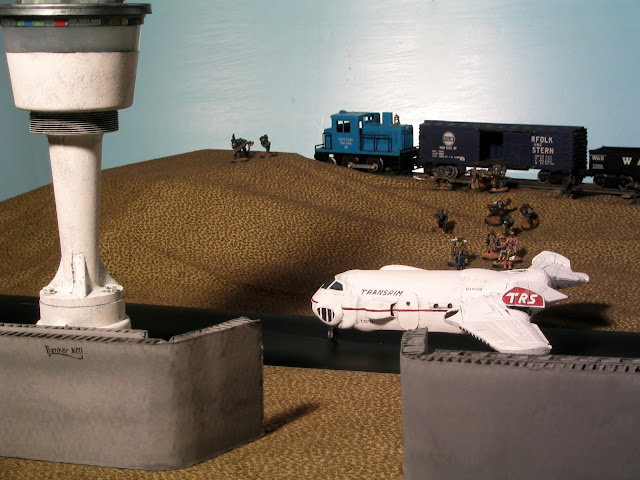 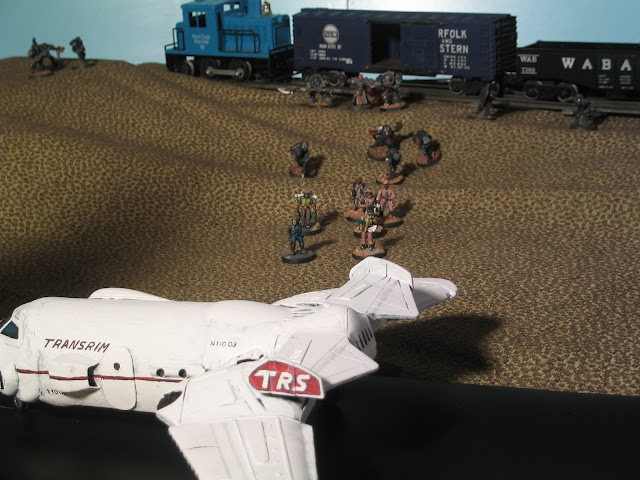 "Oh, perfect. They've taken the crew hostage," grumbled the grizzled chief advisor. "Well, that precludes simply finishing this in deep space. I hope Colorado has this worked out adequately."

Professor Applebeck glanced over at Sir Stanley and said "I may have an idea of my own. Are you familiar with the thermoplas material that comprises the outermost layer of most imperial hard armor?"

"Well, I've long wondered if it might be a sort of Achilles heel. Plastics can, of course, retain a significant static charge. And the powered suits use a sort of electro-chemical contractile fiber for their musculature. I've been working on a latex like fine particulate that, if ejected at high velocity, can induce a static charge in the armor itself. It's an entirely surface effect, thus it's no threat to a person even in direct contact with the armor, but the contractile fibers are generally embedded within the armor's skin. As soon as it's discharged all of the fibers contract immediately and tend to remain that way until the suit's built in power supply can be reset. The wearer should be completely immobilized, at least until they figure out what's going on, and often they will require outside assistance to cope with the problem. A degaussing coil would mitigate some of the effect, but none of the imperial suits I've examined have had such a unit."

"What if you combine that with the vapothane used in anti-riot knockout bombs? Could you do that?"

At this Applebeck scratched his chin. "I believe you could, yes. But we don't have much time. It will be crude and we'll need something at least as large as a standard 70mm artillery shell or rocket. I'm sure it could be miniaturized, but I haven't the time."

"Very good. In that case we should depart now so we can get there ahead of our quarry."

Inquisitor Guimar felt pleased with the situation as it unfolded. The MB-1210 wasn't the newest shuttle, but it was fast enough. And it seated nearly two dozen passengers, thus it had space for himself, his guard, the full squad, and all the hostages he hoped would keep Rex-Avis off his back long enough to rendevous with the Crimson Dragons on Moab. An automated jump repeater had just made contact bringing a reply from the local Captain. It had included rendezvous coordinates at a disused airstrip east of Logansport near a remote cult temple of some kind. Probably some bug infested den of proscribed heresies of some stripe or other. The sorts of unbathed individualism that passed for free thought out here in the back of beyond horrified Guimar. The place needed a proper crusade to clean everything up

"When can we begin loading everyone aboard for liftoff?" Guimar asked the odd brown hairless woman pilot.

"Anytime you like, but the fuel truck won't arrive until 0600 mean. We weren't scheduled to depart for another day and a half," she replied.

"All right, fine. But we can at least begin loading equipment," Guimar shot back.

"Absolutely," said the pilot. "What of that is coming?" she said pointing to the small sea of supplies and equipment.

The pilot barely even missed a beat before  responding. "Absolutely not. Banish the thought. That must be the equipment for the whole squad, and quite a lot of engineering equipment as well."

"Of course. The squad, the warp imploder, my guards, and six guests, including yourself."

"Out of the question." This time the pilot didn't even blink. Her reply was immediate, flat, and by all appearances final.

Guimar was taken quite aback at this. "You don't seem to understand the gravity of the situation, miss. You are my prisoner. You'll do as I say or . . ."

"Gravity is precisely what you don't seem to understand," the pilot interjected before Guimar could even finish. "If I do what you want we'll all be dead. The thing only has so much thrust."

"But it seats twenty four, not counting the two seats in the cockpit! I counted them meyself!" Guimar spat back.

The pilot slowed down a little. Men with large guns often had the hardest time accepting facts they could not change. "Sir, this is a civilian shuttle. The seats are installed to accommodate the maximum passenger load of standard civilians and their luggage, not large strong soldiers and their gear. With all your men and all their equipment we'd be lucky to get a hundred feet off the ground before crashing in a spectacular fireball. Make a pretty show, I suppose, but it's not a role that gets you in the sequel."

Guimar was clearly stung, but he began to slow down in the way of someone confronting the edge of the cliff they've nearly run off headlong. "All right," he said slowly. "This is your area. How many can we take?"

The pilot quizzed Guimar briefly about the masses of his men and equipment, did some hasty calculations, and replied: "Nine, including me."

Guimar looked shocked all over again at this revelation. "All right. Eight alive is better than fifteen dead. Captain Geoffrey," he said, looking at the marine. "I want you, your squad laser, and your three best boltermen. That's the five of you, myself, and my guards. There's our eight. Plus our guest the pilot. And we are, of course, taking the imploder as well, so lets get that loaded aboard then with all our equipment."

"Aye aye, Inquisitor," Captain Geoffrey replied, snapping off a salute before barking orders of his own to his men.

It was going to be a long night.

Agent Sophie strode out the gate to inspect the preparations. She hoped the time had been enough. Alecto was not the fastest ship, but she wasn't as slow as she appeared. Implacable anger could, she supposed, be persistent; and maybe that fury drove the ship in a way that a more usual benefactor would not have. 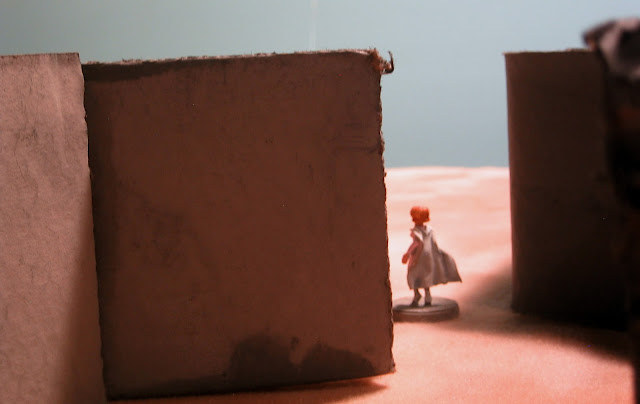 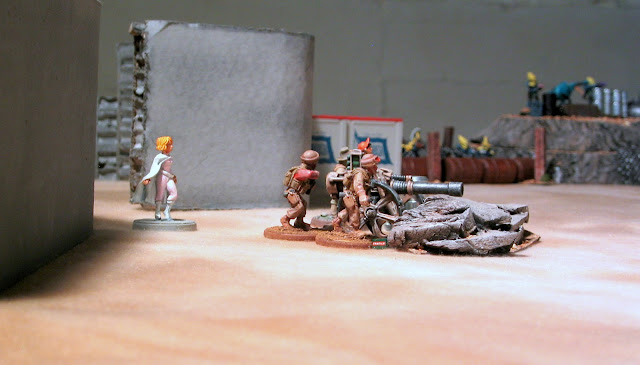 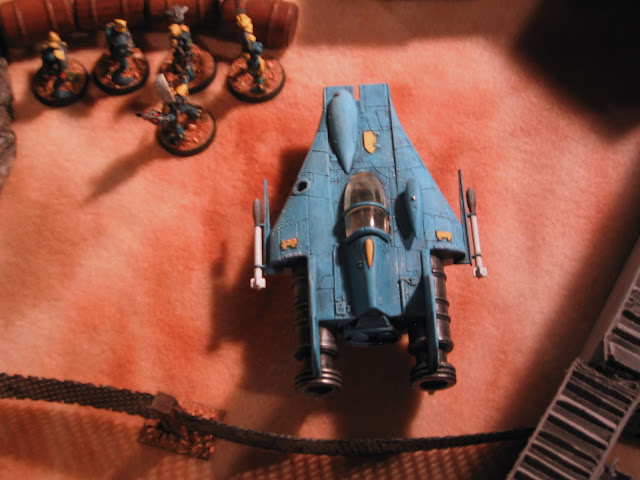 Seeing everything in place she thought to herself, "This just might do. It's not a lot, but it should be enough. Between Applebeck, Arthur, and Sir Stanley we seem to have a credible plan."

Thanks for reading along.

Continued in Episode 9: Knocout Punch.
Posted by The Composer at 7:31 PM