I've always had a desire for accuracy and authenticity in my modeling. It might come as a surprise, but there are times when these two goals work against one another. Authenticity demands a sort of completeness that sometimes requires assumptions, which can in turn compromise accuracy. This is particularly true if you face any degree of time constraint. At some point you have to quit researching and editing and say "Okay. Enough. I'm building this thing now." Technically as amateur modelers we have no special deadline, but if you ever want to get anything done . . .

You see my point.

I began building merchant ships out of that desire for authenticity. No navy can operate without logistics. Frankly, what's the point to a navy if there is no commerce that needs protecting, if there is nothing that you wish to move across the waves to a foreign (often hostile) shore? You can move cargo and troops on warships, but it's terribly inefficient. So if you want an authentic naval wargame you sometimes need merchant bottoms. Sadly I've found it much more difficult to accurately depict merchant ships than warships. It can be nearly impossible to know what ship served as the prototype for a given model. Since the castings are fairly generic and the names often gave no real clue. "Typical British freighter" or "tramp steamer" doesn't really get you anywhere. These run of the mill ships are precisely the ones I want, but they are also the ones least documented. Single screw steamers of four to six thousand tons attracted much less attention than superliners and warships. In time I found good sources, books like Roger Jordan's The World's Merchant Fleets: 1939 or E. C. Talbot-Booth's Merchant Ships: 1942, and websites like Tokosetsukansen, or Old Ship Picture Galleries, but it took me a little while to learn how to use them. As a result, my earliest merchants gave authenticity to my games but little accuracy.

Eventually, as I blew the dust off my conversion and research skills, I was able to achieve a better compromise. My most recent careful conversion, Fort de Douaoumont, benefited from both. I discovered the ship in the pages of Jordan's Merchant Fleets and lucked into a picture on Old Ship Picture Galleries: 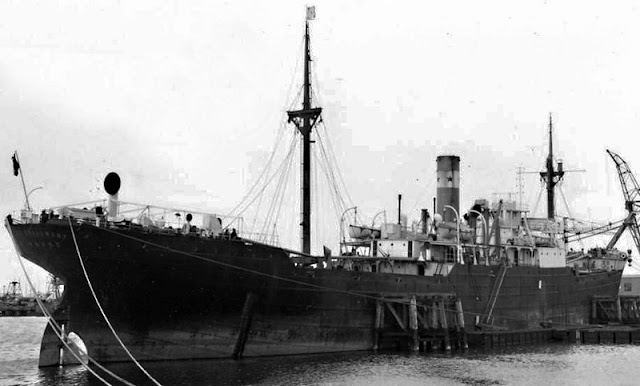 Then it just became a matter of turning this . . .

The first step was cutting away the features I wished to replace. The original model had a very low island amidships and Fort de Douaumont a more prominent one. The model was flush decked and the prototype well decked. The model had three hatches forward and my prototype having two masts, one forward and one aft, most likely had only two. To that end I filed away the combing and capstans at the bow and cut the hatches out with an improvised chisel made by sharpening the tip of an old jewelers screwdriver. Next I cut away the after part of the original superstructure with a pair of nippers. Finally I removed the stern mount. I filed all of these down as flush to the original deck as possible.

Once the hull was trimmed down I built up the fo'c'sle and poop with rectangular styrene stock. 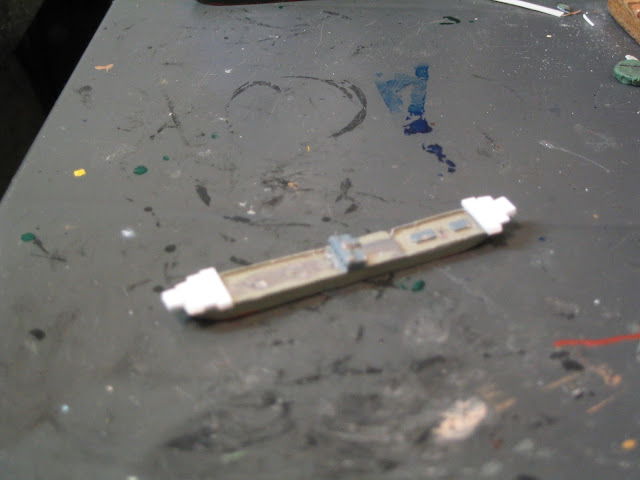 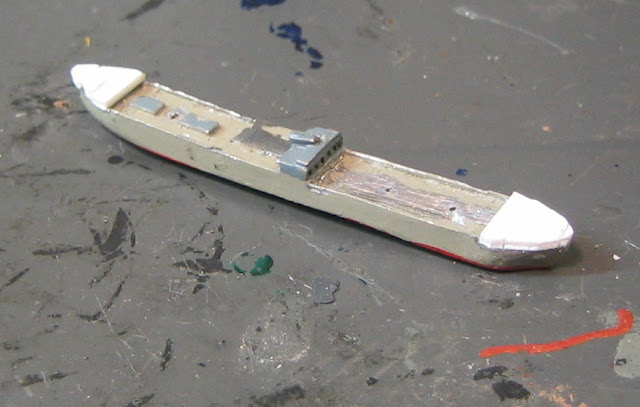 This I trimmed and filed until I was satisfied with the resulting lines forward and aft. I sealed both with a liberal coating of CA+ that I later filed down to give the effect seen below. 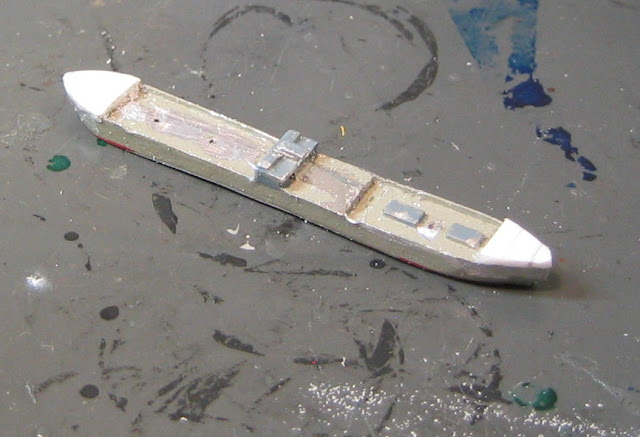 In the process of shaping the fo'c'sle I filed away the cast on anchors, which I replaced with a little green stuff. In the past I've cut these from sheet styrene, but I decided I'd try an experiment and see if I liked sculpting them better. I also worked the bottom of the stern with a rat-tail file to give the ship a more pronounced counter-stern. I added a small deckhouse made of green stuff atop the poop, two hatches made of the same forward, a new superstructure and stack cut from styrene stock, and two ship's boats made of green stuff for an earlier project. (They'd been a little too large for the small ferry to which I'd originally affixed them, but they worked well enough for this larger ship.) Lastly I added two more small deckhouses for winches and affixed the masts to the tops of these. 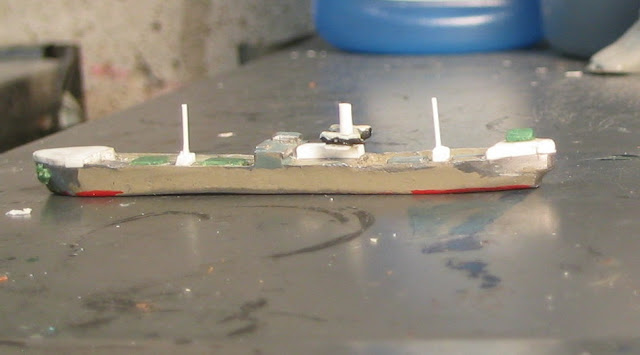 Following that I added spars, mastheads, aerials, ventilators, lifeboat davits, capstans, and anchor chain all made from styrene stock of assorted sizes. For the ventilators and davits I gently bend cylindrical stock over a pair of conical jewelers pliers. To make the ventilator cowls you simply cut the rod at the resulting elbow. The davits are from much smaller stock (.01") and can be cut a little long, glued in place, and then trimmed to length after. To make anchor chain I crush .01" styrene rod in a pair of pliers. The teeth on the pliers give just enough texture to be reasonably convincing. Once all was done I affixed the thing to a painting stand and went to town with my brushes. 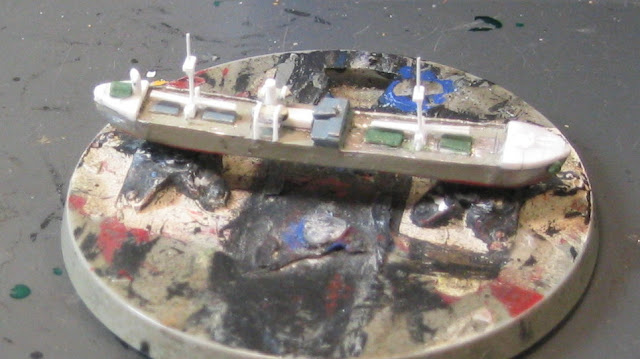 Here's the provisionally final model next to an identical casting waiting for a similar makeover. Included for scale is a standard small zinc ba . . . I mean a U.S. penny. After the photo below I decided the ventilator aft was a little too tall, removed it, trimmed it, and re-attached it to give the aspect seen at the beginning of the article. 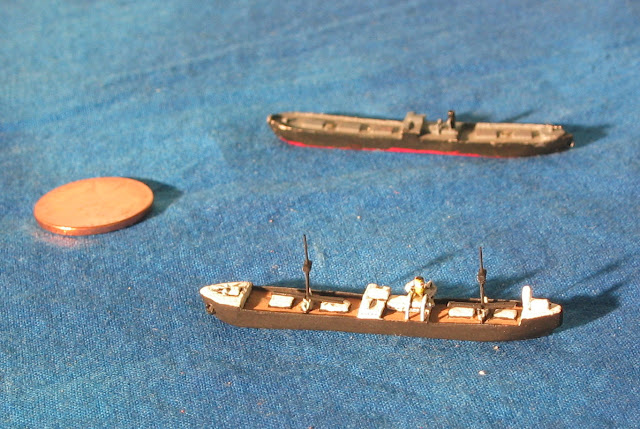 If you know what you're looking for you can probably tell that this is the same casting, but it's different enough that I'm satisfied. For comparison you can see her below with two further renditions of the same. I think the three, though obviously similar, are different enough to be credible. 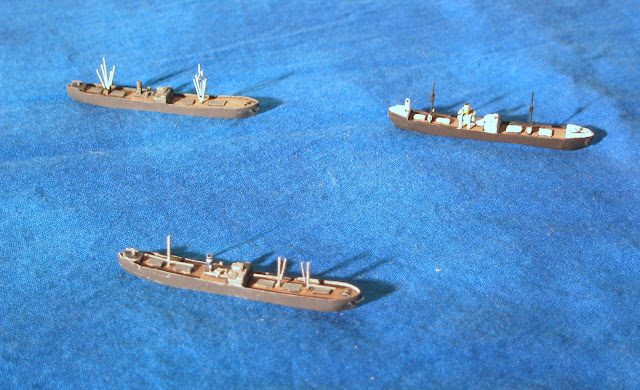 That about does it for today. May your merchant bottoms reach their destinations with a full hold of vital cargoes and may you have as much fun with your own modeling and wargaming as I with mine. As always, thank you for reading along.