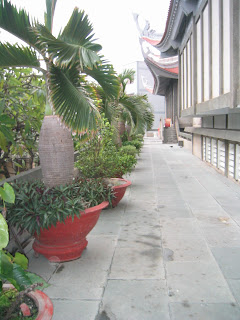 The city once known as Saigon is a strange and interesting place. Contrary to my first impression there are traffic signals and police officers, but in spite of all that, one's first impression of HCM is probably almost inevitably the traffic. There are something over eight million people here and every single one of them seems to own a motorcycle. Further, there doesn't really seem to be much in the way of segregation by function. Businesses, factories, and homes exist side by side in an uninterrupted cloth.

The block I'm on has perhaps a half dozen restaurants, two mobile phone shops, a couple of pharmacies, a small factory of some kind, and an admixture of other things I can't immediately identify but which clearly look business like. And of course people eat and sleep in virtually every one of these buildings in back rooms and on upper floors. There are surprisingly few "stand alone" houses here, even by European standards. And virtually nothing actually "stands alone." Streets are fronted with continuous walls of buildings to the sidewalk line and beyond on all sides. Alleys are distinct from streets only by breadth and lack of sidewalks. And everything is filled with the noise of people and traffic and the smells of food are everywhere at all times. Makes any city in the west seem downright quiet and sleepy. (Up to and including New York.) 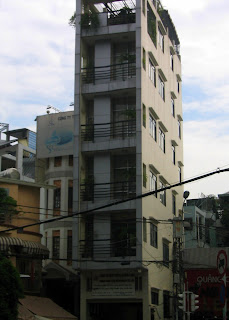 Christmas is apparently celebrated here, and it feels . . . strange. Here's a shop selling little santa suits in all sizes: 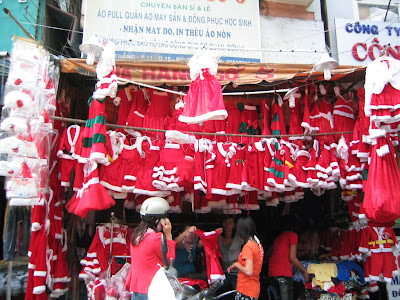 A little piece of the local telecom infrastructure: 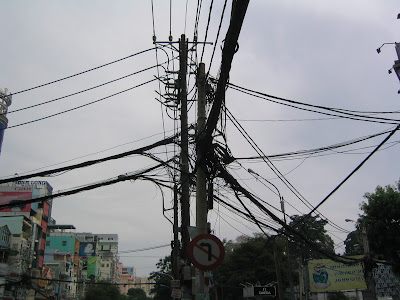 This is about how a typical street feels: 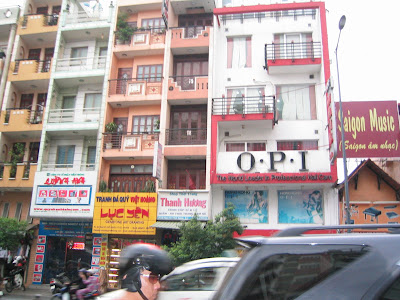 As you get into the older part of town, district one, there are a number of older and larger buildings and even some colonial remnants that have been converted into museums of one kind or another: 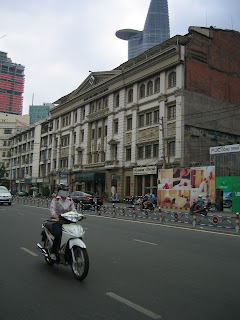 No trip to the east would be complete without a visit to a local temple of some kind. I tossed a few bucks into the collection box in gratitude for letting me take pictures. This one is a fairly typical Buddhist example: 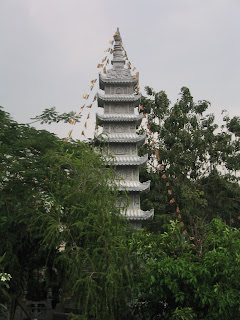 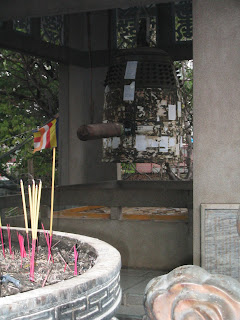 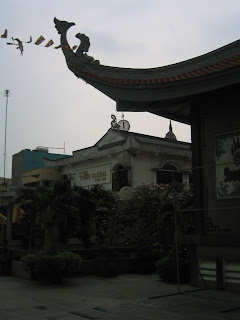 Of course, Saigon was and still is a port city. You can see everything from sampans loaded down with rice on the rivers to cruise ships anchored downtown. The little tour boat went zipping by while we visited one of the museums: 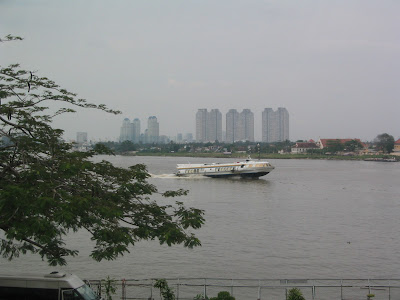 Here's a little glimpse of the skyline, which isn't tall yet, but it's growing: 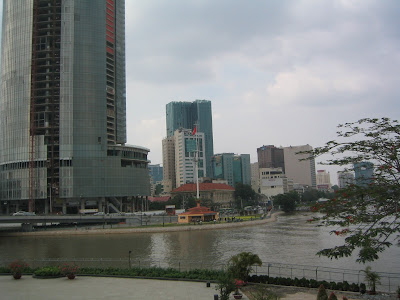 There's lots more I could show you, of course, and in a week I've only scratched the surface, but I hope this taste meets your approval. I'll close with this shot of a back alley near the main market that's become a motorcycle parking lot: 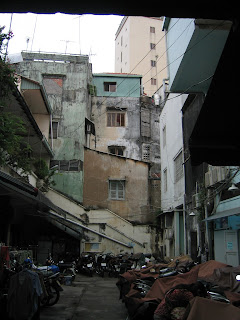