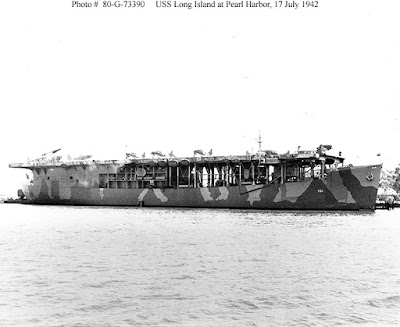 This might well be obvious from my collection, but I am particularly interested in the early part of the war in the Pacific. The part where it wasn't yet entirely clear who was going to win unless you'd looked at shipyard capacity in the two countries. (Or aircraft factories, or automobile factories. Or steel mills. Or oil refineries. Or . . . never mind.)

I'd built a lot of big fleet carriers on all sides, and even a few smaller and earlier British and Japanese carriers, but no U.S. escort carriers. This was an omission I very much wanted to correct.

In particular, I wanted to build AVG-1, USS Long Island. Since she's the inaugural U.S. example of the type, she's pretty significant. Further, Long Island, shuttled many of the first aircraft of the "Cactus Air Force" to Guadalcanal. That alone is more than reason enough to like her. (The Marines surely did.) Yet no one manufactures a commercial model of this ship in 1:2400. A travesty, I say.

So I set about building my own.

At first, I'd considered making the hull from "green stuff" type two part epoxy. This might, I suppose work, but I was only just beginning to explore the stuff then, so I went about it rather the wrong way and chose to use a tried and true ship modeling technique instead.

Balsa wood has gotten a rather bad rap recently, but it still has some significant advantages: It's cheap, it's easy to work with, and it's fairly widely available.

So I used it for my second (and successful) attempt at a hull. I began by cutting a block to the maximum dimensions of the hull and hangar. Next I sketched the most prominent outlines directly onto the top of the block. I then used a razor saw and exacto knife to trim the block back closer to this sketch. I cut angles into the front and back of the block to sugegst the bow and stern and cut and filed a notch between the rear part of the hangar and the fo'c'sle. (I chose to build up the forward portion of the hangar from styrene, since it was quite a bit narrower.) Finally, I used a variety of files and sand paper to clean everything up.

Now that I a hull it was time to start adding superstructure. Long Island is a little different from later escort carriers for a couple of reasons, one of which is patently obvious: the hangar is quite small and doesn't extend forward of roughly amidships. Everything forward of that is quite open. The forward half of the flight deck is supported on open trusswork making her look even older, in some ways, than she really was. I used stock styrene to make the narrower front half of the hangar and all the trusses to support the flight deck. For the hangar walls I used .04" x .08" rectangular strip and for the trusses I used .015" round rods. Both are available from Plastruct. I also made the 5"/38 stern chaser from the same materials. The 3" AA mounts in the bow were made from .01" rod and added later.

The next step was building the flight deck. I chose to make this out of heavy cardstock. To approximate the galleries along the sides I laminated two pieces of cardstock together. The first was slightly narrower than the second, creating a "step" around the edges. Once that was done I made gun tubs and the little stub of an exhaust stack from the strip syrene. I then glued these to the sides of the deck and filed them all back to match. Last, I cleaned everything up, and fixed the deck to the hull.

With the addition of a mast and radar made from more of the .015" rod and some strip squashed up in a pair of pliers (for a sort of "chickenwire" effect) you end up with this: 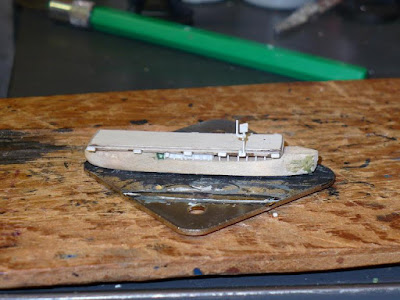 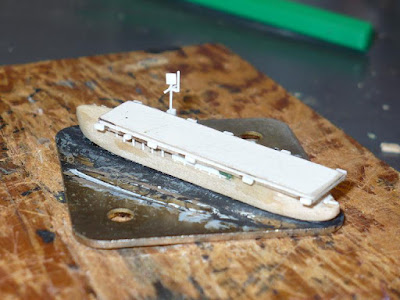 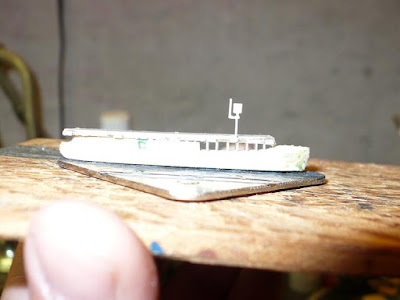 You might notice a little green stuff on the bow. One of the constant problems with balsa wood is sealing up the rather grainy texture. I first attempted this with the green stuff. When that didn't work quite work I turned to spakle. (DAP walboard joint compound, to be exact.)

The spakle, once dried, worked out fairly well. I was able to sand it down to a relatively nice smooth coat. It could chip, I suppose, but thus far it has not. I figure if it holds up in a wall it should do well enough in a model.

And with some paint and those 3" AA mounts you get this: 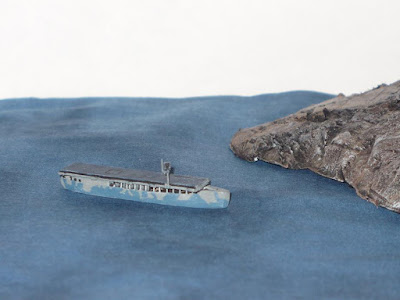 Now that I'm comfortable making anchors, anchor chains, and some lighter AA I might eventually go back and add them, but for now, that's not too bad if I do say so myself.