In mid 1942 the US Navy suddenly found itself short of flight decks. (This was going around. Britain and Japan had felt the same squeeze. Something about bombs and torpedoes being particularly hard on ships and sailors.) So we started carving up our half completed ships and turning them into carriers. (You could think of it as kitbashing on 1:1.)

We picked some Cleveland class cruisers for the project and the Independence class light carrier was born.

My first foray into this class was with a Panzerschiffe miniature. They're robust and easy to work with, but rather plain unless you invest some time and effort. I'm a poor man, so my time is cheap and my money is not.

. . . Besides, I very much enjoy converting things.

And it seems so does the fellow that owns Panzerschiffe. When I pulled off the flight deck I was quite surprised to find turrets and the remnants of a superstructure underneath. Looks like his Princeton is quite literally a converted Cleveland. How funny is that?

Once I was done adding all the usual bits like masts, radar, and extra gun tubs this is what I had: 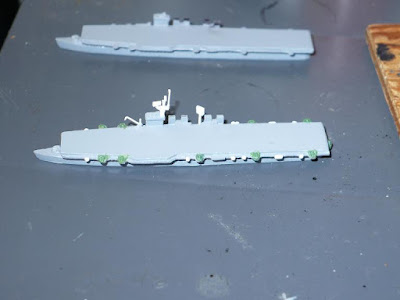 You might notice the green bits. I've been experimenting with a technique called "squash casting." It's pretty simple really. Your original has to be one sided and can't have any "negative space" or overhanging spots. You can carve it from styrene, build it up from pieces, or even make it from something like polymer "clay" or "green stuff."

Once you've got that you take a ball of "green stuff" (or clay, sculpey, what have you. Something that can be made to harden), and fix your still workable ball to the end of an appropriate handle. (Dead paintbrushes work well.) Next you wet the original with something that will act as a "mold release." I use water, since I've been using a two part "green stuff" style epoxy. Press the ball that will become your mold straight onto the original and pull it straight back up and let your mold harden. (With the green stuff you just wait.)

Once you've got your mold you press it onto small pieces of similar materials to create positives of the same thing. Repeat ad infinitum and presto! You have as many Borfurs forties as you need.

But I digress. I should continue on to the actual painting. Well, almost. There is some prep you might want to do first.

The pros advocate washing the model to remove any mold release, but I've never found that to be necessary. I also don't bother with a real "primer" coat. I just use a coat of the same craft acrylics I use later for the color coats. (I've become a big believer in craft acrylics. I find the results to be every bit as pleasant as more expensive hobby enamels at a fraction of the price.)

In order to handle small miniatures while painting them I find you have to at least temporarily affix them to some kind of base. If you're going to permanently base your miniature there's no reason this can't be the real base. I don't base my ships, so lightly glue them to a "painting base." Any old flat something or other of about the right works. I've got some scrap metal plates, some old fantasy model bases, and even a piece of linoleum tile. 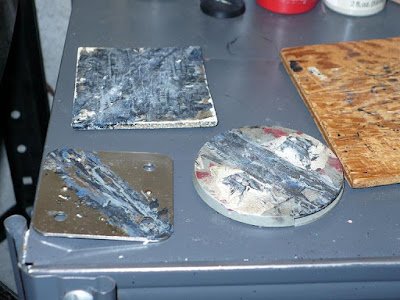 Now to the painting. (At last!)

There are several ways you can basecoat a model, and I've begun to dabble with others at least occasionally, but most of the time I use black. It's a little bit more work to cover it and the colors look a little darker when you're done, but the shadows look great and it saves you the step of "black lining" around details later. (Though it's still good policy to touch up.) 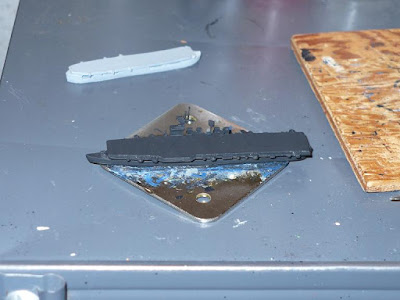 This part varies a bit based on what color I used for my basecoat. If I'd used grey I'd apply a liberal black wash to settle into the cracks and create dark shadows. (For which I use a very watered down bottle of the same craft acrylic.) Call that Step 1.5, if you will. But with a black base, which works particularly well with schemes that are dark to begin with like the US Navy's ever popular MS-21, which just happens to be the color that Princeton wore in 1943 and how I chose to depict her, you can proceed directly to applying your basic colors.

With naval miniatures this is typically at least a two part process, since you'll want the deck and hull to be different colors. I usually start with the deck and paint the hull later, since it's often harder to get the deck color into the nooks and crannies without getting it on other vertical elements of the ship. I should also add that I like to use heavy brush strokes to simulate planking runs on decks. This turns about to be surprisingly effective. More on that later.

After you've painted your deck you can go back through and touch up the black on anything that's not deck. Once that's done you can start painting the smaller vertical bits. This will require a relatively fine brush, since you want to avoid getting non-deck colors on the deck. I like to leave a very small "shadow" line between my vertical color and my deck color. (Which is how I avoid "black lining" when I use a black basecoat.) I also tend to leave such "shadow lines" around important details, which helps to give the finished model a more defined appearance when viewed from normal table distances.

Larger surfaces, like the sides of the hull itself, can be painted with a larger brush. It's a little quicker and less brushy that way. 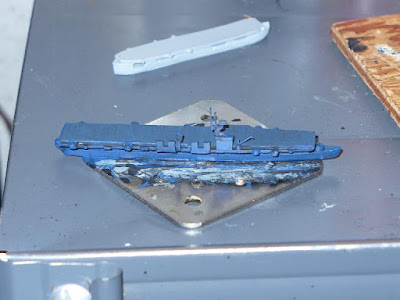 Highlighting is a complicated subject, and I don't always do it the same way, but at this point you can begin to highlight if you wish. Alternately you can save it for the last step. If you choose to highlight at this point, you will want to use a lighter version of whatever your primary shade is. (A lighter blue to highlight navy blue, for instance.) And you will want to avoid highlighting the deck in the same color as the superstructure and hull. In this case, I didn't bother. I was perfectly content to leave the ship fairly dark and simply highlight everything by drybrusing at the end of the project. As I've begun to build more detailed models I've also begun to spend more time highlighting them, but this was a transitional project and the paint job was fairly simple If you want a nice "quick and dirty" gaming miniature this is a good example, but if you want a showpiece you might want to spend a little more time between step two and step three.

Now there's some variation in how I execute the next step. This is the most usual order, but sometimes it's actually easier to paint these markings onto big flat decks before you paint the deck color. It depends a little on what you want to achieve. Recall that I tend to try to paint thickly and brushily on decks so that I can use the brush strokes to approximate planking runs. On Japanese carriers, where the planking runs run fore to aft it's quite easy to paint the markings first, touch them up, and then apply the deck color. (Leaving just a hint of a black line around the markings to make them stand out, as above.)

With American carriers, where the planking runs across the beam of the ship, I started painting the deck first and then adding the marks. I've since reexamined this, since it's been making the effect almost too pronounced. (Touching up adds another layer of brush strokes in some places, but not others.) Still, that's what I did in Princeton's case, and while not perfect, the result is good enough for my purposes.

This is also a good time to add black dots for portholes and bridge windows if you want to get that involved.

At this point I like to add a nice final highlight to draw everything together and give the ship a weathered appearance. For most ships I find that I can simply drybrush lightly with a very light grey. It will help to make the "shadow lines" look more subtle and less cartoonish. It also helps to hide places where the color isn't quite even. Finally, it helps to bring out small details like those brush stroke planking runs.

You want to be fairly light with this. When I've used it too liberally it looks like my ships have been caught in arctic storms. But on the other hand, some variation in a fleet isn't a bad thing. It helps to approximate different wear and weathering. Sometimes that MS-21 faded in the sun badly enough that when the Australians decided to paint things "Chicago Blue" they picked a much lighter color than the US Navy had actually painted Chicago in the first place. (Odd but true all you rivet counters and paint chippers.)

And last but not least I go back and add a little black to really deep shadows (like "under" gun barrels cast onto a deck or openings into a hangar) or the tops of stacks that would be completely sooted up.

With Japanese ships I also take a moment to put a black dot onto the bow and a gold dot onto that to approximate the chrysanthemum on the bow. By putting the black dot on first it gives the gold dot a little definition, making it look more raised. (And one dot on top of the other actually does raise it just a little.) Of course the US wasn't really using figureheads by WWII, so there's no parallel to that in this case. But the finished result looks something like this: 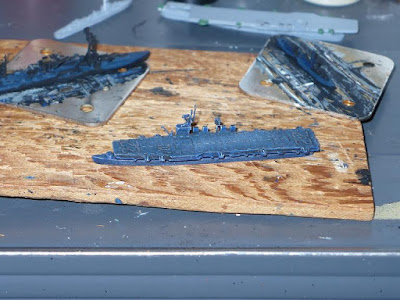 In the background you can see Independence and a US destroyer being laid down. On the ways in front of them are, I believe, USS Chicago and another US destroyer. (Two Sims class destroyers? Possibly? Would be easier to tell if they were in focus.)

So there's a bit on the "quick and dirty" paint job. It's not the best example, since there's so very little color contrast, but hopefully you get the idea. I'll go into more elaborate methods at a later date.
Posted by The Composer at 4:42 PM