Business is Picking Up

While much of the rest of the galaxy is under quarantine, thanks to the spread of some alien disease,
the Tartarus Rim has been relatively busy. Along with the usual stream of coreward tourists and itinerant workers seen at the shuttleport the infamous Duchess of Pain Court and her Boudoir Noire arrived from points unknown. 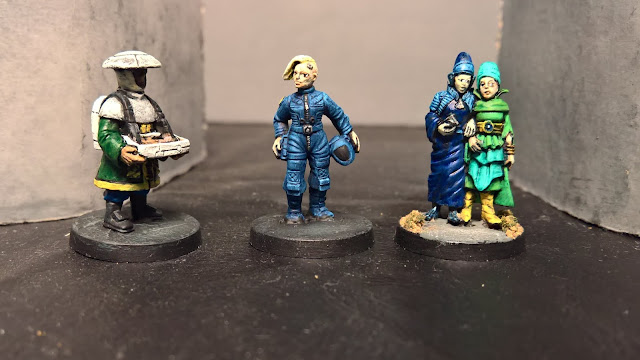 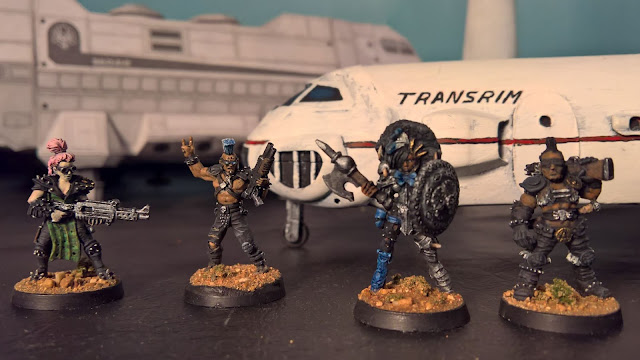 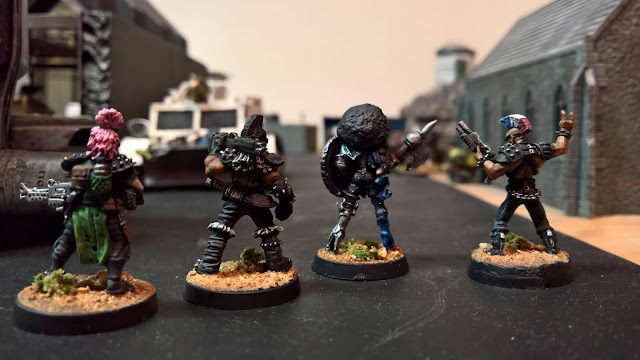 Meanwhile, business at Pie in the Sky remains steady as Longansport gears up for the district fair. 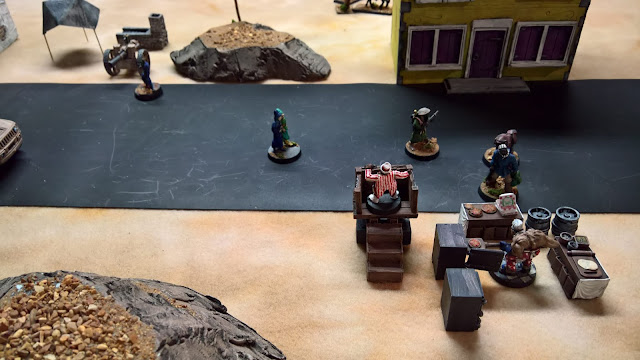 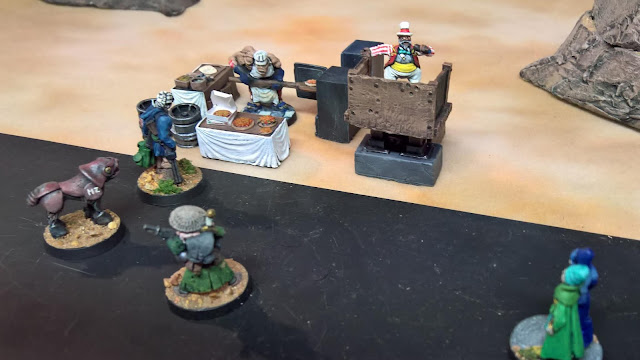 Stepping back from the table let me introduce the new arrivals. They're are a fun mixture of Colony 87 (now available from Crooked Dice), assorted oldhammer fan commissions, and Ramshackle's carnival barker from the pizza set Curtis Fell kindly sent out to his patrons. (Among whom I now count myself.)

Below are the first three of the rather extensive "third wave": the food vendor, the alien tourists, and the human pilot. I've really struggled with these. They look deceptively simple, but in reality the detail is incredibly fine, which makes them more of a challenge to paint. Break out the magnifying glass kiddos. In spite of all this, I love them and I'm glad to have them. Not much to say about the paint schemes here. I try to keep my NPCs varied. They are, after all, ordinary people from quite different backgrounds just out living their lives. While you might think I fell into a bit of a green and blue palette trap, I'm not too worried about it since the rest of the set has plenty of other hues already. (The blue for the pilot was a conscious decision, as my other two pilots are variously in khaki and green. I have a fourth I might paint in red and white.) 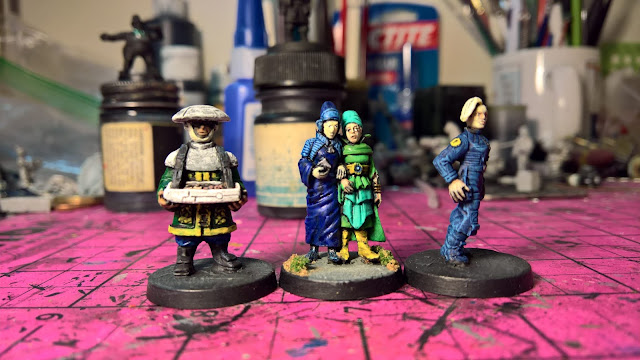 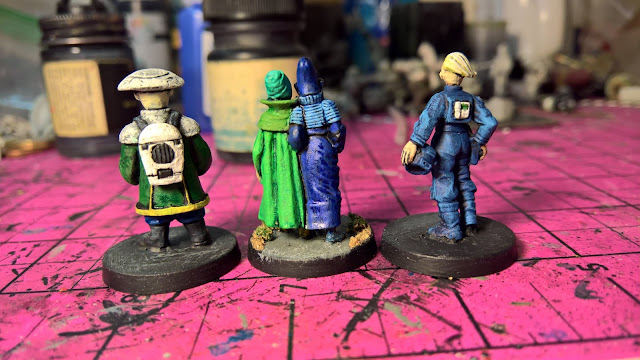 I've chosen to depict the food as sushi, which . . . seems not ideal. But hey, maybe that's a high tech tray. Hopefully it keeps it cold as the vendor walks his route and treats his customers to his favorite music. 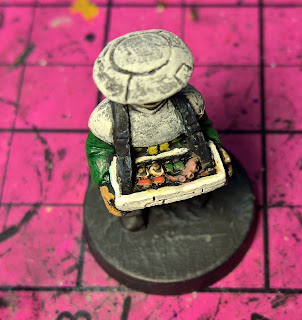 The fan commissions are variously from Oldhammer in the New World and the Emporium of Rogue Dreams. "Psycho Sam", on the left, is by Mark Copplestone. "Max" and "Maddie," bracketing Mark Perry's legendary LE Chaos Amazon, are both by Drew Williams. Altogether, I think they make a fairly homogeneous and quite fantastic group, and I expect you will see more of them. Since they are supposed to be a gang I decided to go ahead and use that dreaded restricted palette. (Well, a little. I don't want to go too crazy.) I kept the colors mostly cooler, and leaned heavily on the black leather so prevalent in my memories of 80s glam punk and darker sci-fi. I did allow myself some "warm" colors as small touches here and there to break up the monotony. I am pretty darn happy with the overall effect. 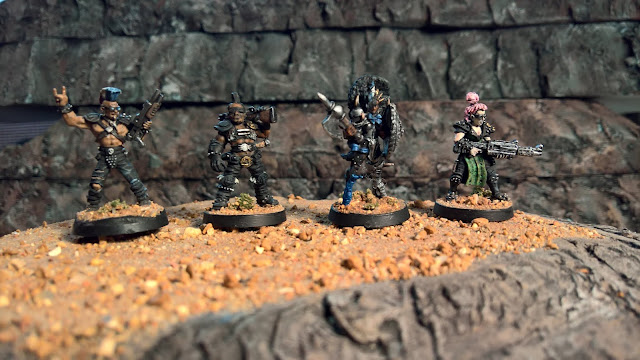 Last but absolutely not least is our dimmunitive carnival barker by Curtis Fell of Ramshackle. I've chosen to give him a bright and eye catching outfit loosely based on Dick Van Dyke's Bert out of Mary Poppins. After all, he's trying to draw a crowd. Showmanship! 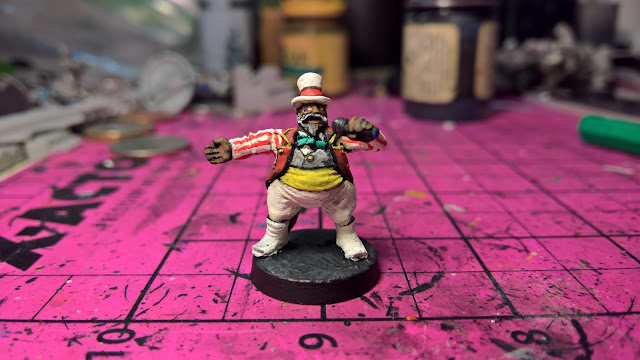 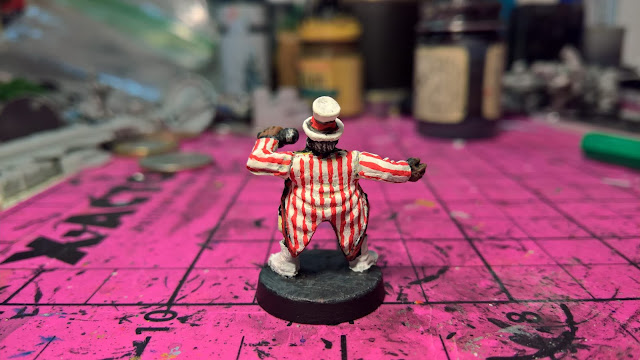 While not perfect, I'm reasonably pleased with the effect. He's colorful and eye catching and looks good at table distance.

Thank you for coming along for the ride. Hope to see you at the fair!