The (Old) Spice Must Flow!

There are few things in the world of Rogue Trader that elicit so much controversy as the "Deodorant Stick Skimmer," sometimes also called the "grav attack." Many of us love them as bone-fide sci-fi skullduggery from a day when there weren't too many commercial kits available. Others think . . . "Gee whiz, ma, that things probably got some smelly old hippy's pit vipers stuck in the pintle! And it still looks like a deodorant stick with toy guns!" Well, love 'em or hate 'em the Old Space Tanks are as Oldhammer as they come.

Of course I have a genuine old one painted in dodgy enamels when I was, oh, fourteen or fifteen. Who doesn't? 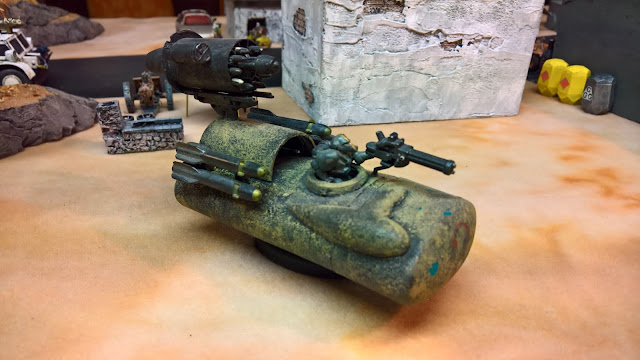 But I had this odd belief I could do things a bit better now. Not sure why, really. It doesn't always bear out, but . . . maybe sometimes. That said, a trip down memory lane is always worth the price of admission. So I gathered up an empty tube of the Old Spice, an assortment of bits, some toy guns, and a plastic spoon. I wanted to use this as something of a proxy for a Falcon, since my eldar are rather shy on support. One of these days I'll come into an era appropriate resin Falcon or two, but until then . . .

The first part that really spoke to me was the shell from an automotive air freshener. It's got a nice swooshy feel to it that's just right for the space elves. And hey, that means a doubly deodorizing tank! The gun isn't anything particularly special. Just something off a friend's G. I. Joe toy I had lying around from some defunct 80s project. But it needed trimming to plausibly mate with a blister. I hacked it off at the most acute angle I could manage. 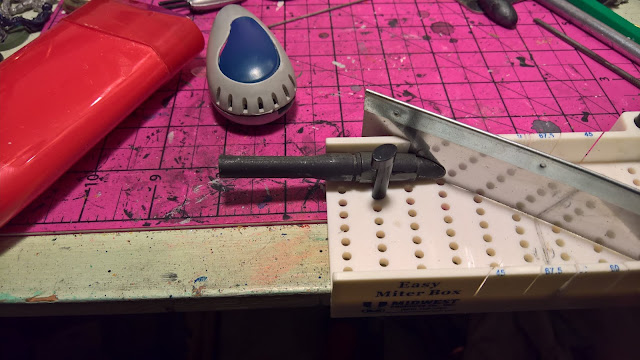 The air freshener, conveniently, comes apart into several equally interesting bits, so I'll save a couple for later. 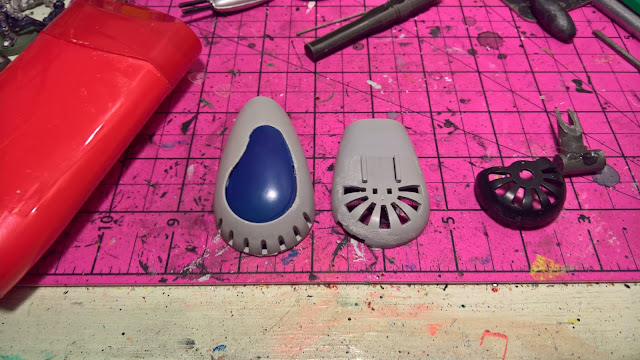 With the spoon and air freshener shell glued to the deodorant tube a little spackle served to fill the gaps. I'll sand that down later and it'll work out nicely! 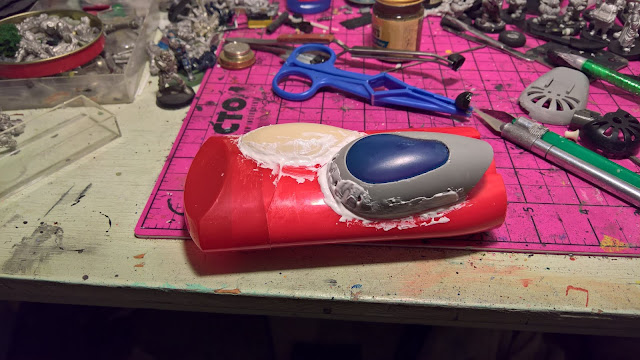 Add to this a few mysterious panels and the barrel and now we're getting somewhere! 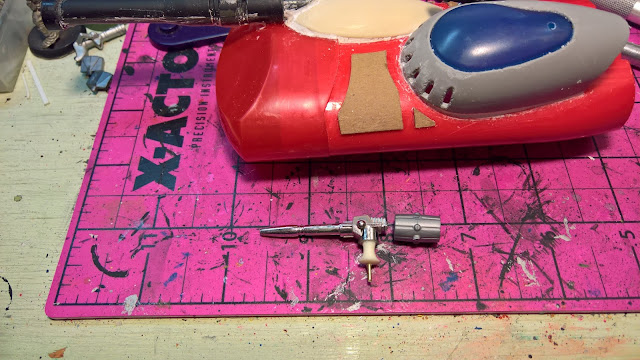 Oh yes, and the pintle mounted laser is off a Zoid. (Even the rear portion, which was a gear from a Zoid motor.) Proper old school, that! Add some vents and a drop tank and now all that's needed is paint! 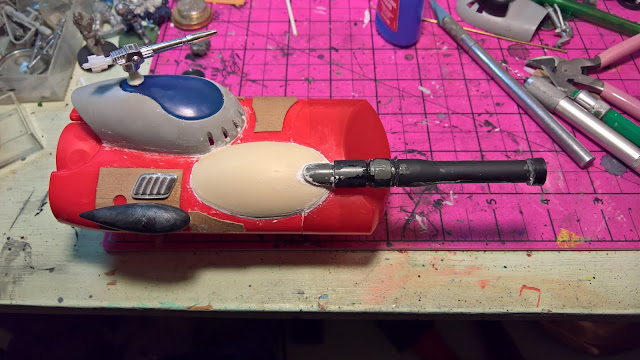 After a date in the painting bay The sweet smelling Falcon proxy comes out all primerized! And poses for a compare and contrast with the original skimmer. Maybe I'll take that old one and repaint it in eldar mercenary blue, since they do look suitably similar to be members of the same basic family of fighting vehicles. I can probably find a new pintle mount and a different driver. Not quite sure. It needs some love, but I haven't quite decided how to go about that yet. 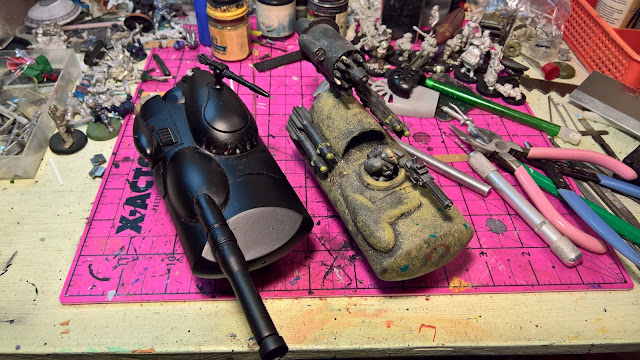 At the end of the day we have a blue skimmer of questionable utility with some suitably alien looking lettering and sigils. (The characters are Georgian numerals, if you're curious. Used quite improperly. I think that says "one ten four," which I believe is actually nonsense, but hey, it looks okay. And we can pretend it's 104 in my decimal brain.) 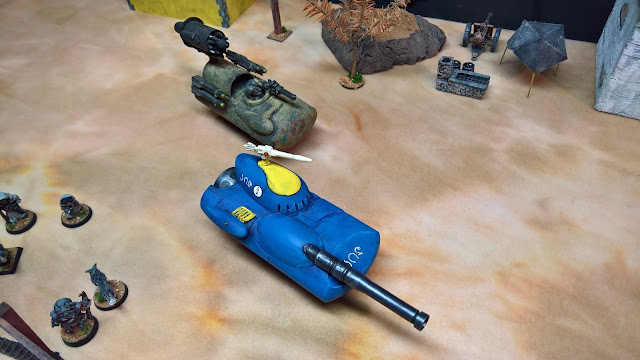 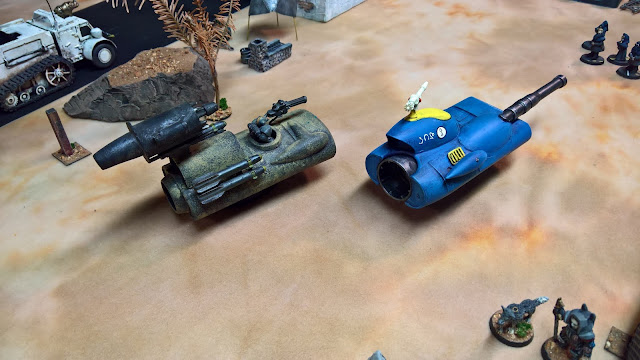 Oh, one small aside: Jimmy got a light kit! You might recall I built a new utility truck out of some spare Ramshackle parts and assorted odds and ends. Well, I always thought it looked a bit odd without lights, but I hadn't been able to find something suitable. The lights below turned up in a scrounge through an old Revell Robotech Trigon kit I found lying about. I've used parts from it for decades, but I thought I had lost the bulk of it years ago. Turns out I was wrong! And the lights look nice if I do say so myself. 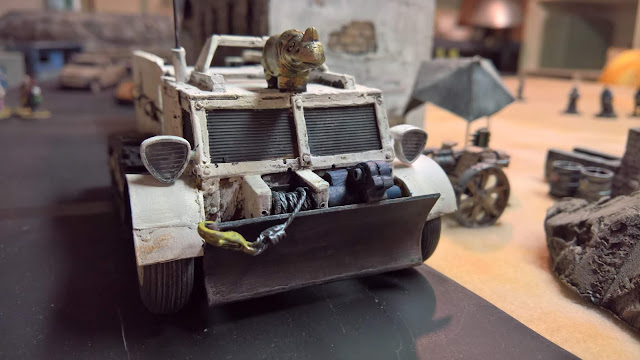 Anyway, thanks for following along on this little diversion. Hope to catch you next time.