An Exorcise in Caution Part II: To Dance With the Devil

Previously on An Exorcise in Caution, Lucas Warmbier, the ancient scion of the Burkhan Kaldun dwarven engineer's guild, was tasked with studying Terran equipment and tactics under the guise of a joint exercise without letting the Terrans learn too much in turn. We find Lucas sitting in his sidecar and watching the parade from the starport.

Lucas thought to himself and jotted down a few notes as he watched the troops roll onto the field. His task was ostensibly to serve as "blue team" defending the shuttleport against an alien incursion from "red team." With the one twist that "red team" was, in fact, a mixed company of Terran marines and army troopers. No matter how this came out, it ought to be interesting and educational, and the weather was lovely, so . . . Lucas was ready. If the other fellow would march his men up the hill Lucas would march his down again and see where that left everyone when all the smoke bombs and flashing lights cleared up. 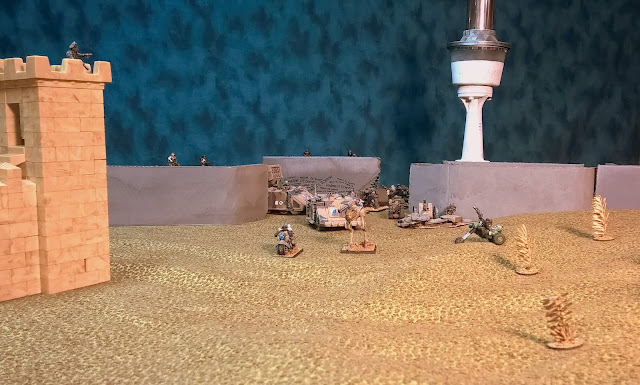 The basic plan fell into the broad category called "Let the Wookie Win" by fans of old earth theatre. Hopefully in this case, since it was a contest of strength, it wouldn't prove too difficult to make that convincing.The real question was to see how strong the big hairy monster from humanity's ancient past really was, and whether that monster had half the tactical acumen to match its ancestor's be damned strength. Still, it paid to at least try to deploy well. Immediately outside the spaceport gate was a replica castle with enough mass and care to be genuinely useful. To approach the spaceport gates, which were themselves fortified with modern plascrete, the would be attacker would inevitably need to pass quite close to the castle. So Lucas put a strong force both within and without the fortress. To the east, on his right flank, he deployed the Bradislav brothers (a quartet of enormously tall ogres), a mobile rocket launcher, and a squadron of Burkhan Kaldun's finest petrocavalry, including the younger Ganbaatar. 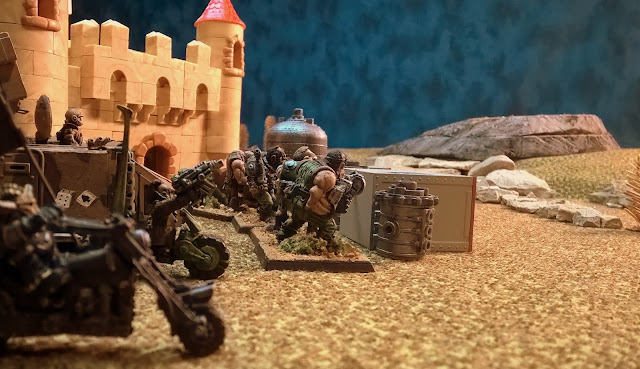 The left he anchored with Moab's most veteran lifers, a squad of Burkhan Kaldun's most experienced, a small artillery battery, and a mobile reserve mounted in an APC. 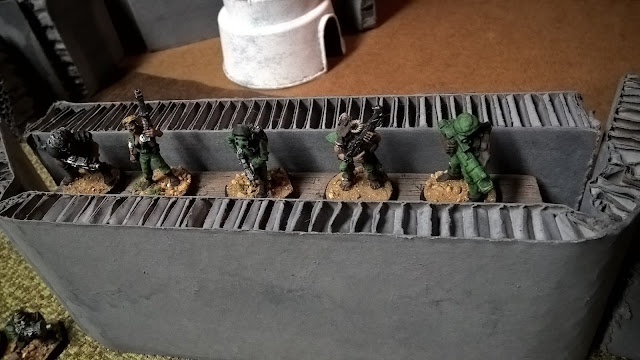 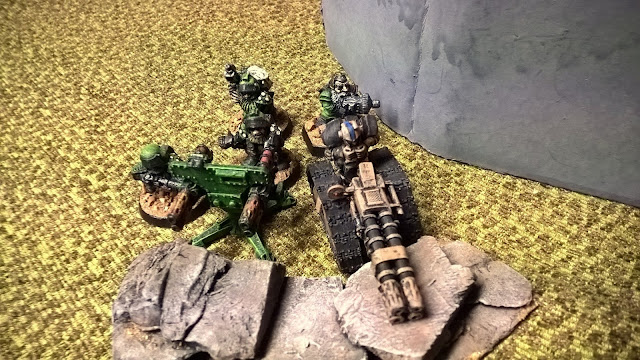 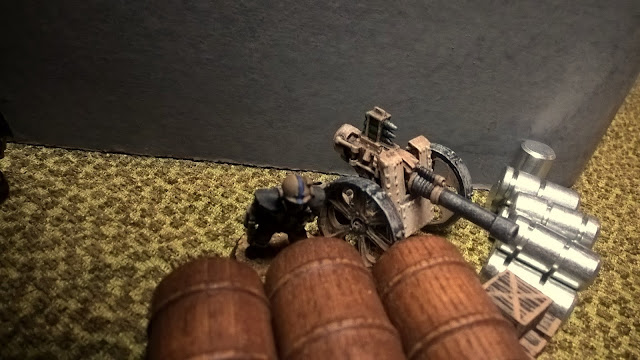 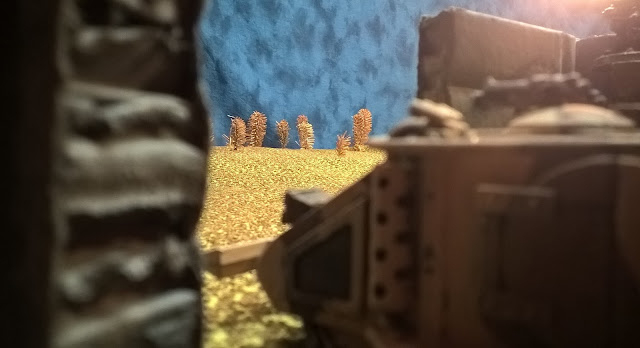 Outside the castle that dominated the center Warmbier arrayed his hearthgard and a scout walker as further mobile reserve. 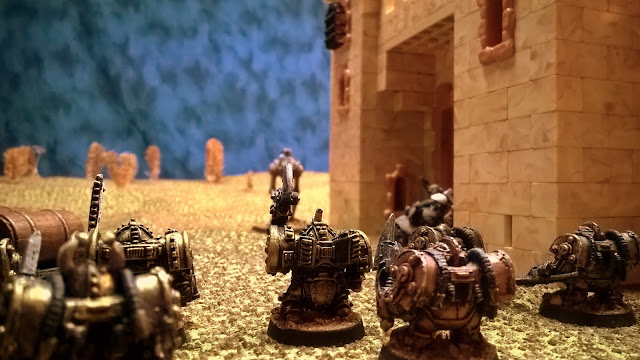 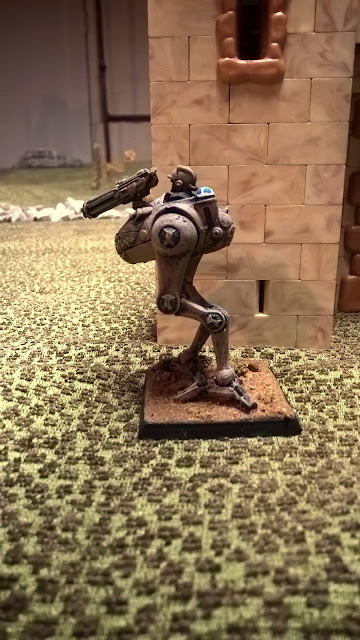 The fortress itself was defended by two squads from the Logansport 1st, one mounted on the battlements and at the firing slits below and a second held in reserve in the bailey, where they could easily deploy to either flank, should reinforcements be required. 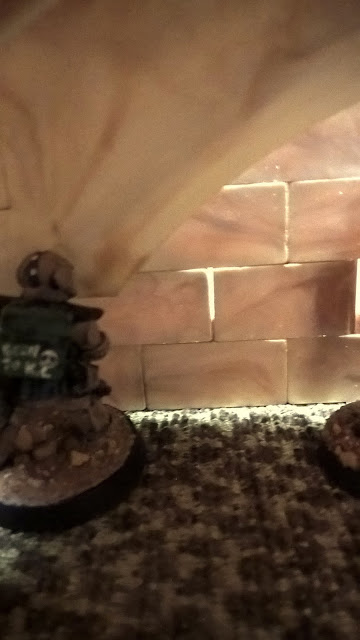 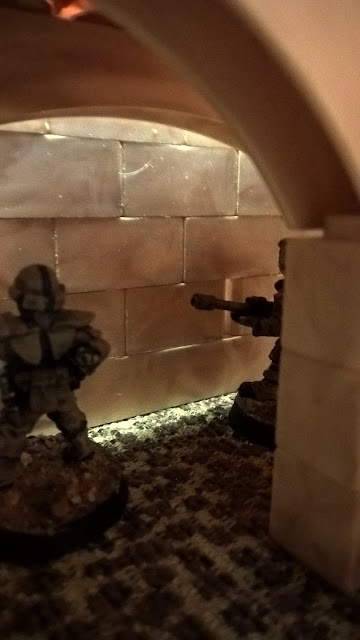 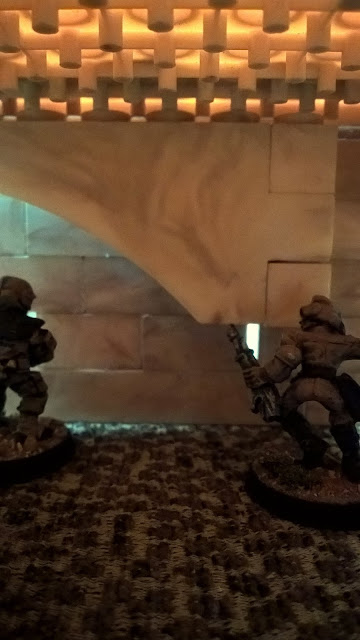 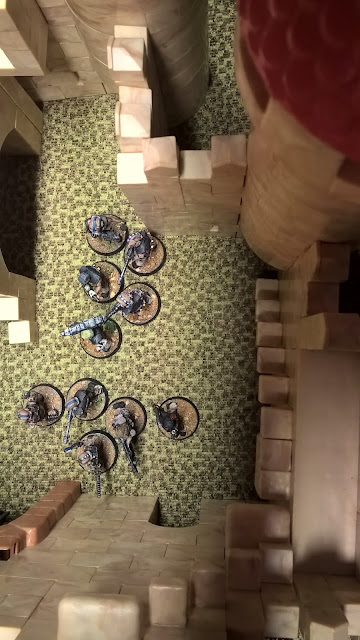 And finally it was time to test the theory. Gaius Josephus had arrived with his troops in tow and they were indeed marching down the hill. The referees set off the first smoke pots and declared the opening salvos to have missed. 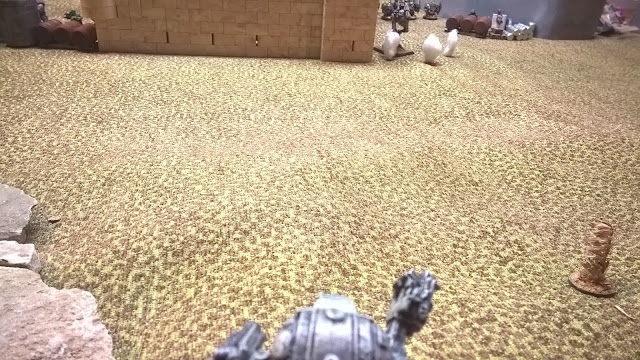 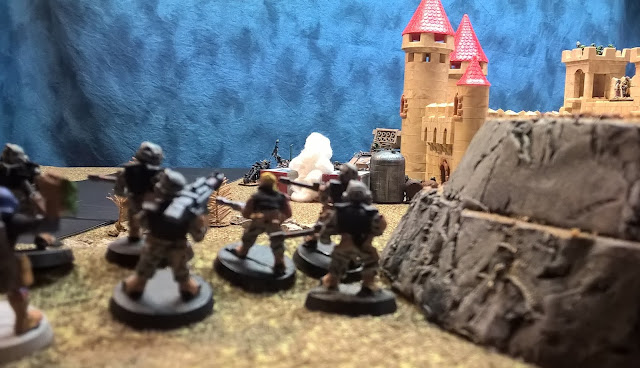 But the fighting was fast and thick. Before the dwarves could even bring it to bear their microwave cannon emplacement was declared disabled with suitable pyrotechnics for punctuation. 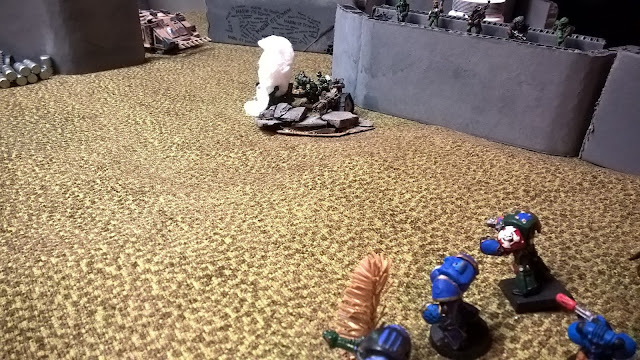 Luke's defenders finally gained a measure of retribution when the howitzers and SAWs began to score hits on the heavy suits. 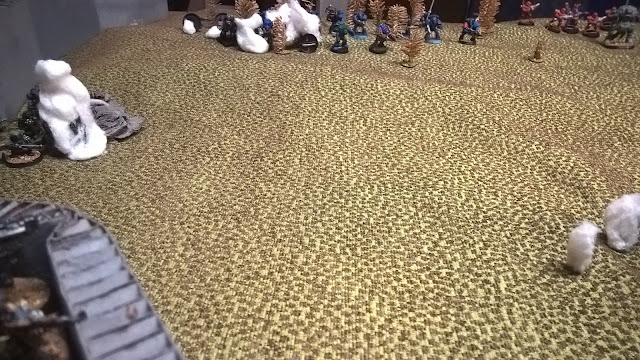 On the right the mobile artillery was jusdged to have scored against further vac troopers.

But the cavalry charge was disrupted and one of Burkhan Kaldun's own vac suits was obliged to play the role of casualty. 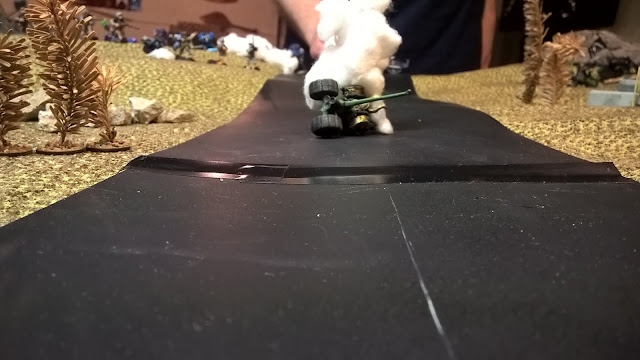 Just as the mobile arty was itself removed from play the ogre brothers made a valiant charge at the Terran left. 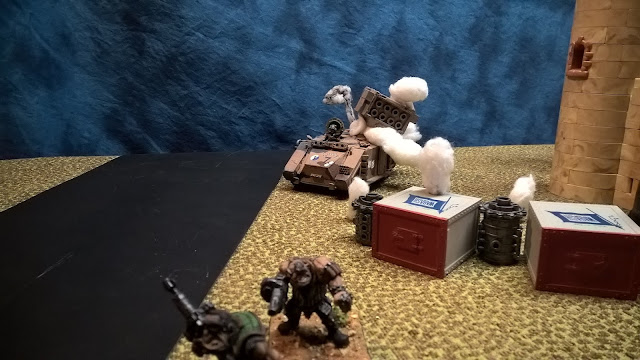 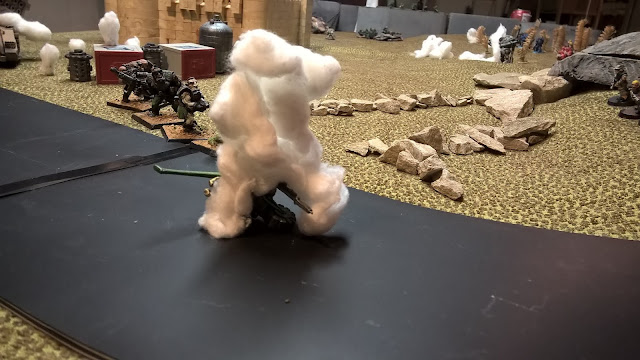 At the end of the day the referees called the exercise a draw, but Warmbier was fairly certain Josephus had convincingly gotten the best of him. Those Terran Marines really were fairly fear inspiring units, particularly the chaps in the heaviest turtle suits and the gent wearing the walking tank. The pocket panzer was a force to be reckoned with, much more dangerous than a scout walker, even if there was a superficial resemblance. There was just no arguing with force shields without something along the lines of a microwave gun or a plasma projector; something with a good chance of overpowering them. They'd have to ask Captain de Bayamon for more intel. In any case, no matter the outcome, Luke hoped he and the other Rim officials had learned enough if push ever came to shove.

Meanwhile behind the curtain . . .

Jay Bobson and his brightly colorful Star Marines played the role of the Terrans. I, of course, played the Rim defenders. We mostly used Rogue Trader, but with a few tweaks. Since I was defending, I deployed first, and Jay reacted to that. His goal was to capture and hold the entrance to the spaceport. The graphic below gives an approximate view of the battlefield. The top is a low ridegeline with a rocky promontory at its center. on the right a road angles through the low spot in the ridge and down past the castle. The barrier walls at left guard the entrance to the starport, with the resort world's signature castle beside it. Some scattered woods and a few coral walls from a farmer's pasture land provide a bit of cover. 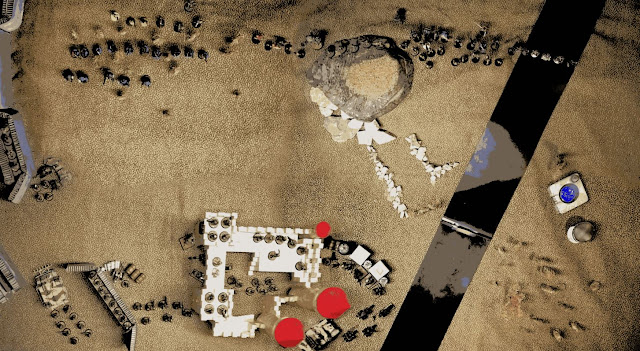 The one significant change we made was a turn sequence modification inspired by Bolt Action: we used a card draw to determine who would go next. Jay had red cards and I black for each of our units. Also included was one joker. Shuffle the deck and draw. Whatever comes up determines who can activate. The joker ends the turn and whoever has not already moved simply does nothing. 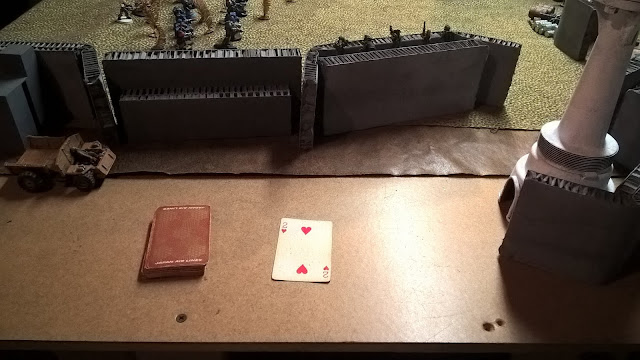 In theory this means you want to move your important units early, but I think we had too many cards. Not only did we include them for squads, but also for personalities in the cases where they moved separately. This meant there were lots of cards in the deck, so the joker wasn't particularly likely to come up in any particular draw. This dulled the "whammy" aspect of each draw and made the turns run longer.

For next time I think a better system would be to have every personality a member of a squad. If squad and personality satisfy unit cohesion rules, you may activate them together. If they are acting independently perhaps it should be one or the other. No reason you couldn't use a future card to activate the other part, but that would automatically mean you won't be moving everything, even if the joker comes up dead last. This creates a natural cost to detached operations. (The same could probably work for any detached element.) Sure, you can do more subtle stuff, but the more complex chain of command will slow you down. I think I can live with that. And with fewer cards the odds of the joker coming up increases dramatically. Winner winner!

Which brings up another thought: we both used snipers. Snipers could be the one exception to a couple of rules. They should probably be the only units allowed to target individual person-sized models. And they could perhaps all act on a single activation phase, unit cohesion or not. After all, snipers always act independently. That's just what they do. But one card should probably still suffice for all of them.

Anyway, I think we both had a good time, though long games and hard concrete floors aren't the friendliest on the tootsies. And obviously this will all work better as we get our stride back and settle on some major combat rules that satisfy both of us. In the end, I'd love to maybe shepherd a campaign through the distant stars, so we do need to find good rules.

As always, thank you for reading along. I hope you enjoyed the yarn as much as I.