A while back a friend of mine asked me if I'd paint some miniatures for him. I've taken commissions every once in a while in the past, but I don't do it often because it's a lot of work and I don't have the guts to ask for the kind of scratch that would actually be commensurate with the time I invest. Maybe this isn't surprising. But this was a friend, and I said yes. Originally this was to have been a simple "paint up the Panzerschiffe" project, but darn if I can ever leave well enough alone.

Well, my friend Owlfeather wants to play some WWI games, and of course the Battle of the Falkland Islands is a nice, if rather unbalanced, place to start. The most famous participants are probably the two British battlecruisers: Invincible and Iflexible, followed closely by Graf Spee's two heavies: Scharnhorst and Gneisenau. (These are, in fact, the very ships Owlfeather first purchased.) I started with the British pair. As usual you can see some of my styrene additions to the model. 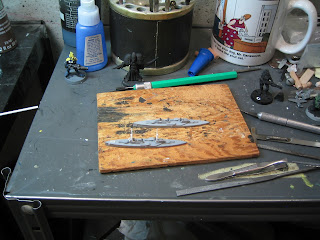 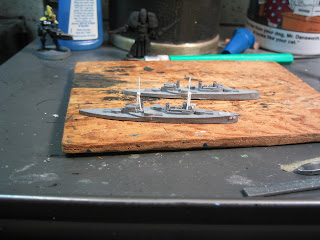 The tripod masts are .020" cylindrical stock topped by small rectangles cut from more styrene blanks. The aerials atop are .015" stock. For anchor chain I've found that smashing .010" cylindrical stock with a pair of textured needlenose pliers works fairly well. The anchors themselves are carved out of think styrene sheets. I cut a small square and put two groves in one side that I pry open a little. I then trim the resulting center bit down a little to make a sort of squashed sideways E that works fairly well. The anchor capstans are very short pieces of .020" stock. I glue them to the deck and then file them down to the same height and simply run my anchor chains up to them. In reality the chains should generally wrap around them and go back, but at this scale a little abstraction is inevitable.

While imperfect, it helps to solve the empty fo'c'sle problem. With nothing the expanse simply looks too large and too barren on ships of cruiser size or larger. (I've decided paint suffices on destroyers and under. Not only is the hardware smaller on lighter combatants, and thus less visible and harder to model at 1/2400, but you generally need many more of them. For the sake of mass production I have decided some sacrifices are acceptable. And prop guards give a better return on investment, but that's something for another post.)

Here you can see the result after I've applied a basecoat and the deck color. 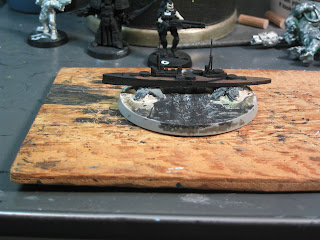 Here you can see the completed effect. Invincible and Inflexible lie at anchor on the Sea of Shijin ready to do battle in the name of grognardery and the right to drink dark beer. The Kaiser's fleet will no doubt attempt to extend the hegemony of both yellow beer and lighter gaming. Me? I like both. I guess that makes me a neutral in this battle. 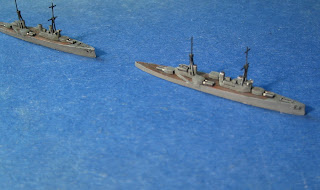