Minor combatants are often amongst the unsung heroes of naval warfare. (They're in good company with auxiliaries and merchant vessels. Everyone likes solid teeth in their military, but without a good logistical tail the teeth have very little bite.)

I've long been interested in minor combatants and lately I've begun to find more sources for off the shelf models of these. Most notable amongst these is the Seabattles line which is available in the U.S. as recasts from Viking Forge. While the models from this line aren't quite as crisply cast as GHQ, the models have a lighter, more delicate appearance and look fantastic painted up, and since most are one piece castings even inexperienced modelers will enjoy them. I bought two packages in the U.S. range: the Treasury class cutters and the USCGC "Party Pack."

The first contains four models that look something like this:

This depicts them more or less as they looked before the war, so I felt some changes were needed to militarize them. As the war grew longer the Navy added more and more armament to these lovely little ships, but the first round primarily saw the addition of an improved AA suite and some additional ASW weapons. I started with USS Ingham, which was a little less modified early war than some others. I worked from this photograph I found on the Historic Naval Ships Association website: 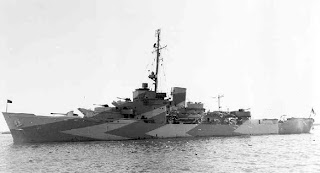 This is apparently a modified version of what was called the "Thayer" system of deceptive camouflage. Thus far this scheme is unique in my collection. If I understand the early war changes correctly, she had one of her 5"/51s landed and gained 2 smaller mounts forward (possibly surplus 4"/50s), a pair of smaller mounts aft (possibly surplus 3"s), two autocannon/machinegun grade mounts, and some ASW astern. I didn't attempt to depict the ASW, but you can see my changes to the AA and surface fit. [Thanks to Carronade on WW2f for the corrections.] 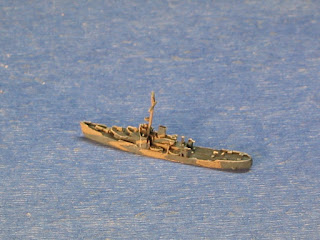 Further, I added the mast, the searchlight platform, and the bedspring antenna according to the usual crushed styrene stock method.

The next ship was much more satisfying: 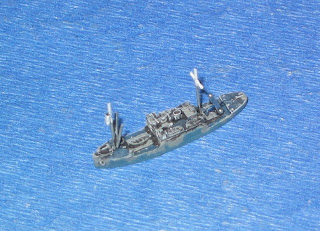 This one took some real research. She came from the "Party Pack." One of my only complaints with Viking Forge thus far is their refusal to sell the other cutters in their inventory individually, selling them only as a random selection from a pile of prewar, wartime, and postwar cutters. (If I were going to be uncharitable I might guess that all the cutters accidentally ended up together and rather than try to sort them back out it was decided to shake up the box and sell them in "booster" packs a la Magic the Gathering [of Your Money.]) It was on me to figure out quite what I had. Careful research helped me identify some of them, but only after I found a complete Seabattles catalog saved in my files, lord knows where I found that, was I able to confirm some and correct the rest.This turns out to be USS Northstar. (IX-148 to the Navy, WPG-59 USCGC Northstar to the Coast Guard.) And I was absolutely endeared by the dainty little ship with the SOC aboard aft. I attempted to depict her as I found her in this picture from NavSource: 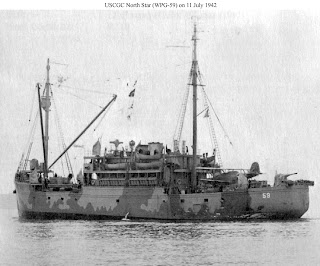 Last but not least is a pair of tugs I acquired from Panzerschiffe: 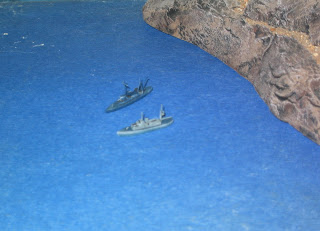 The dark blue one wearing MS-21 depicts USS Vireo, which attempted the rescue of USS Yorktown. She was built as a Lapwing class Minesweeper but later reclassified as a fleet tug (old) ATO-144. The nearer ship, wearing MS-22 graded paint, depicts USS Navajo, AT-64. Navajo survived air attack and numerous tricky tows in the Guadalcanal campaign only to be lost to a torpedo from I-39 en route between Bora Bora and Pago Pago in the Spring of '43 far behind the front lines.

These two models required a bit more work than the Viking Forge acquisitions, but the end result is fairly satisfying. All of the above might call at a South Pacific harbor like this one: 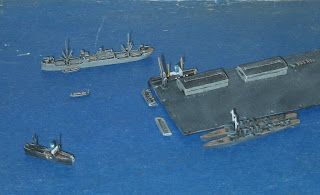 But discussion of that can wait for a later post. Next up: Imperial Japanese tiny terribles (and a few heavys.)
Posted by The Composer at 5:55 PM