Yesterday in Intentional Terrain I hinted that I was working on an abandoned jail for my temporarily orkified mine camp. 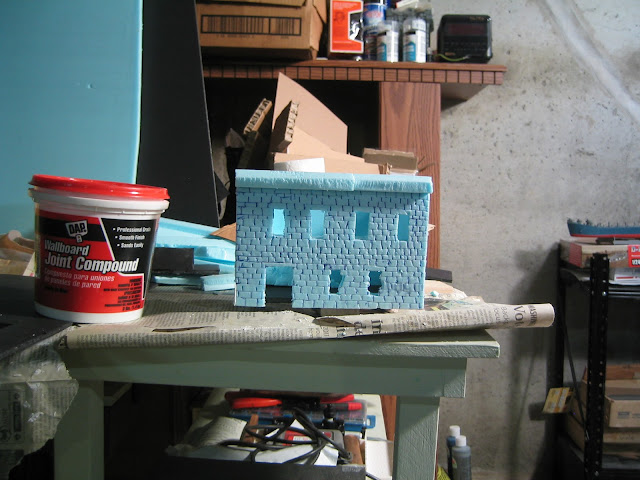 In general it's a pretty standard blue foam build. Press texture in. Draw blocks with a ball point pen. You know the drill . . . The only abnormality is that I insist on mudding things selectively, which I described yesterday. You can see below how I block-textured small sections of the wall and left the rest blank before covering the remainder with an irregular skim-coat of joint compound. (Or mud, if you prefer the trade name.) 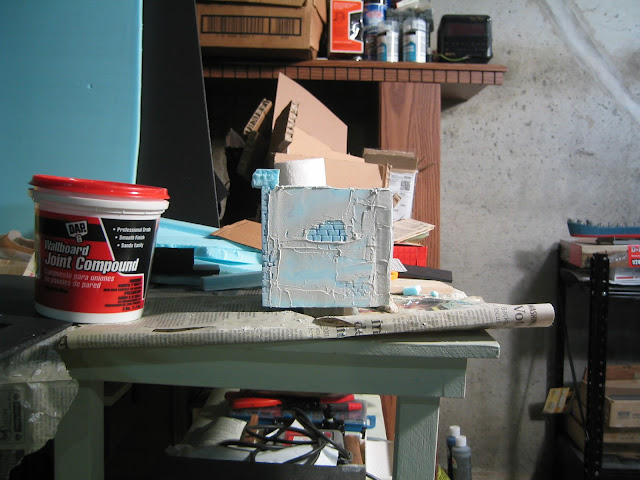 Well, this morning when I went to paint the thing I made a little booboo. For those who are unaware styrene is a non-polar organic which is readily broken down by non-polar solvents, like those in CA+ or most rattle cans. When gluing this isn't necessarily a problem, because the melted styrene eventually solidifies together making a pretty decent bond. This is precisely how your old plastic glues work: they literally melt the plastic which then recrystallizes in a modified form. There's clearly a chemical reaction as the resulting material is rather different (probably not polymerized) and you can often detect a slight release of heat when you drip a lot of solvent based glue onto foam. Further, the odor is rather distinct. But it works, and fairly quickly at that, which is the important thing from my perspective. I don't have the patience for PVA.

But I digress . . . when you're painting styrene based foam, like the blue stuff (and pink and white, for that matter) it's generally best to use a plastic friendly, i.e. acrylic paint. Some hardware stores do indeed sell this in a rattle can. I have bought some. . . . But that wasn't the rattle can I grabbed this morning. Somehow I didn't look at the label, just the color on the cap: grey. Grey is good sometimes. Styrofoam and xylene, however, aren't the best of friends. You might notice a rather distinct change in texture between the above pictures and those below. Thanks to the xylene (and possibly the acetone) my blocks became much rougher and more porous on the surface. Hey, that's okay. Just makes 'em look all that much more arid/deserty. I have, in point of fact, used this property in the distant past. Xylene REALLY eats into low density white styrofoam making positively gorgeous battle damage. Todays experiment was something of a happy accident. Not complaining, mind you, just observing. 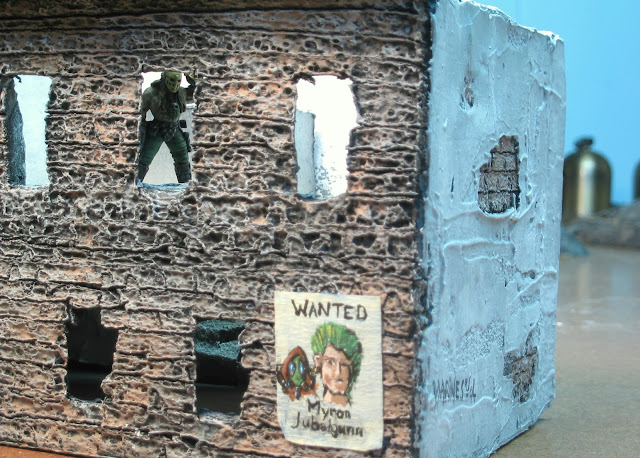 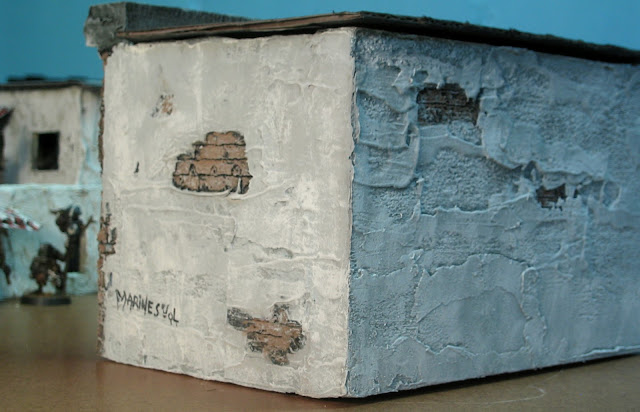 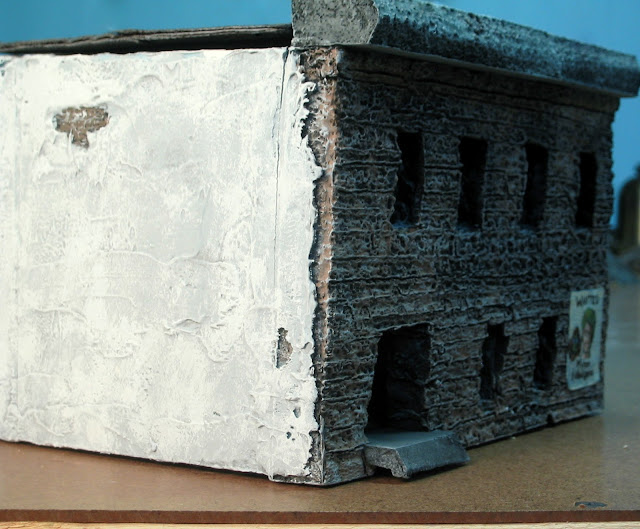 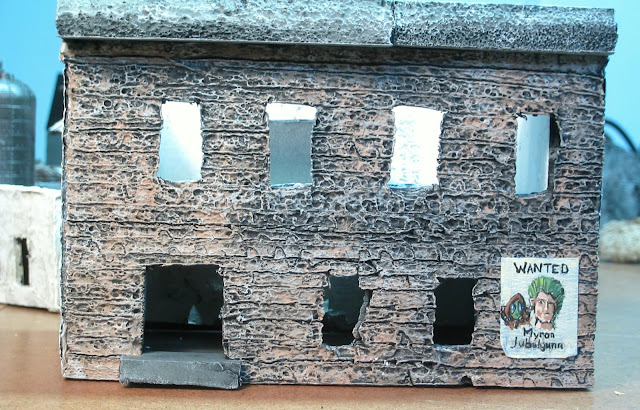 The interior isn't much to write home about, but it's there. The railing isn't pretty, but it should serve to help keep players from knocking miniatures down the stairs. (Much as it would in reality.) 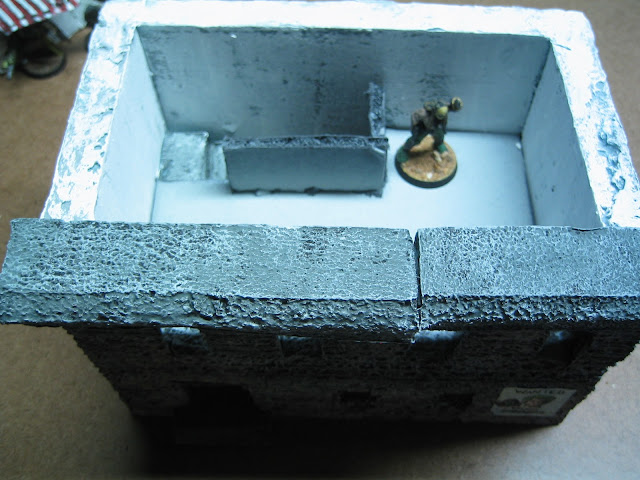 The pillars are likewise crude, but they work to hold the floor. And the stairs would be a splendid trip hazard to unwary attackers or escaping prisoners. (Uneven stairs trip people up terribly. And these are very, very uneven.) 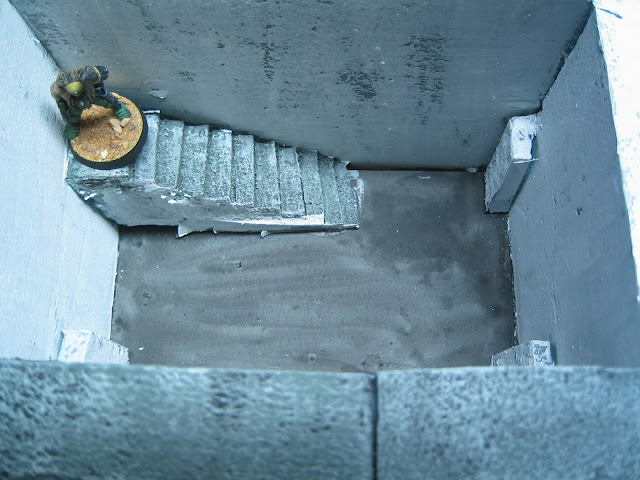 I suppose this isn't really most properly a jail. It's really more of a small blockhouse for the local constabulary. As you can see, the windows were cut with defense in mind. 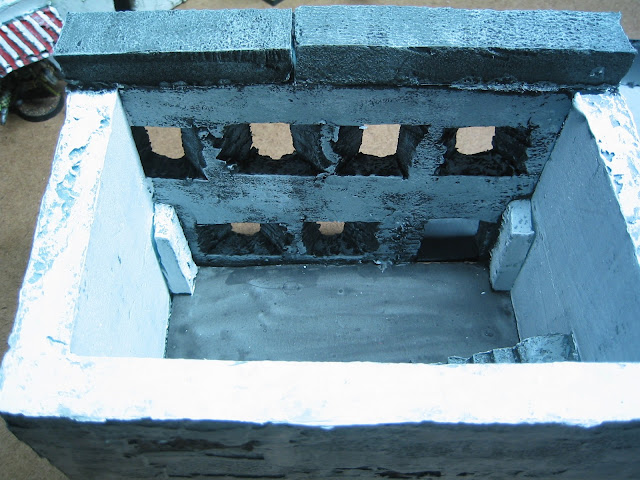 Of course, one can't completely resist the urge to see what the view might be like from the inside. 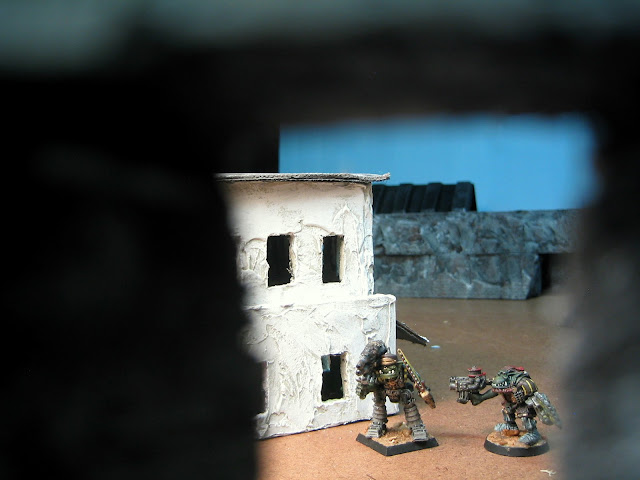 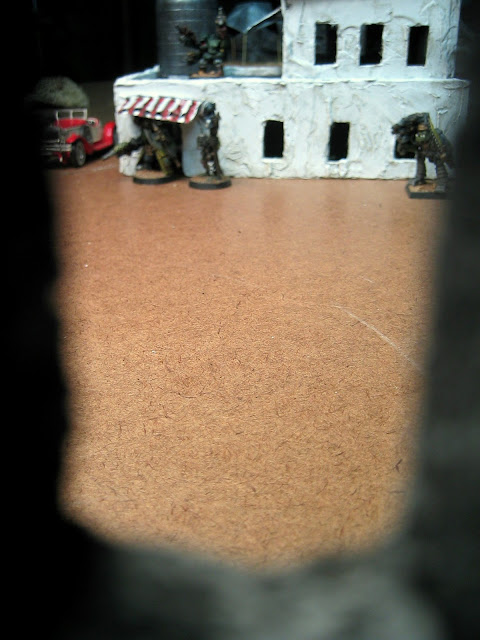 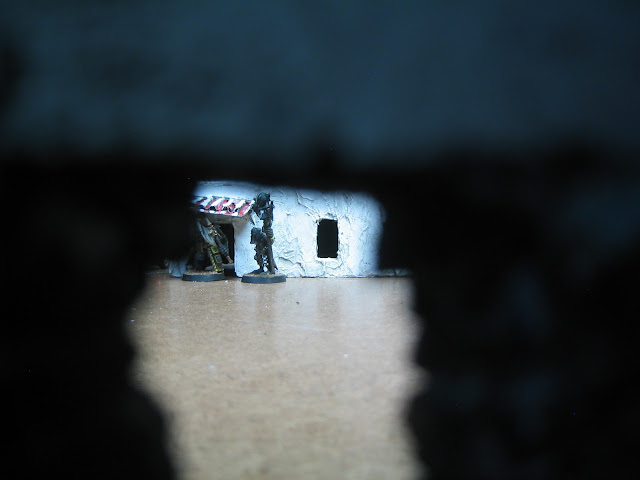 I'm sorry, what did you say about Squiggycap's ride? He's got good taste. And it's red, so it'll go faster, as every orc (and police officer) knows.

There will be more later, as there's still some small structures and set dressing to be made, but the camp is well on it's way. Honestly, it's pretty well usable for the upcoming episode right now, but I still have time before filming begins, so I'll use that to improve what's beginning to look like a good thing.