It probably won't surprise anyone to hear that I have a soft spot for small quirky ships. The Scrap Iron Flotilla is a classic example of such: 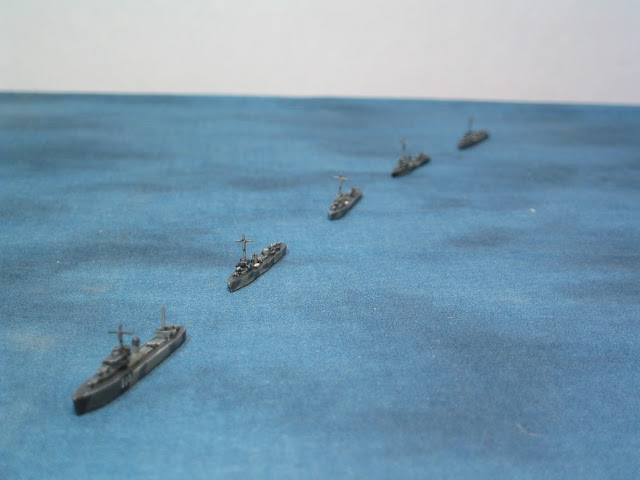 These five hand-me-down destroyers served in the Australian Navy. They were a little like the naval equivalent of the comfortable old pants that weren't quite in style anymore that you found at the Salvation Army. They were warm, the price was right, and you needed winter clothes, so you bought them only to have the fashionable rich prick with the next locker over deride you for it.  In this case the fashionable prick was the Nazi propaganda machine, which bequeathed the moniker "Scrap Iron Flotilla" on these fine destroyers. They served with distinction through the arduous early war, initially in the Mediterranean, where Waterhen was lost supplying Tobruk, and later in the Pacific, where Vampire and Voyager met their fate at the hands of Japanese bombers. At left in the photograph is flotilla leader HMAS Stuart, followed by Waterhen, Voyager, Vampire, and Vendetta. Below is a second picture with the four V class destoyers (don't ask me why Waterhen is a V. Maybe she's a double V) along with HMNZS Achilles of River Plate fame. Vendetta is now in the foreground with Vampire, Voyager, and Waterhen behind her. 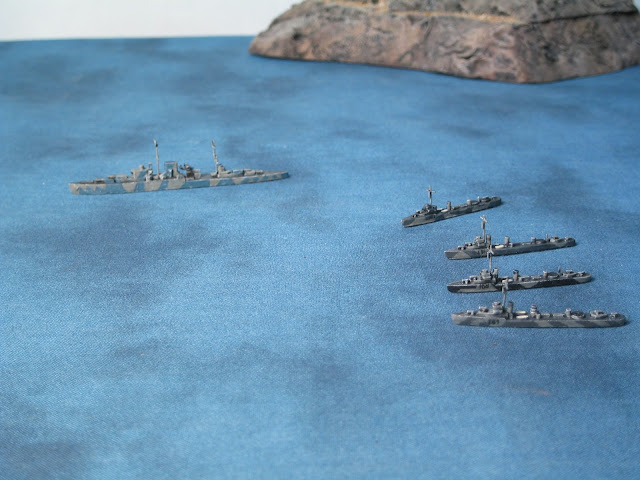 The next ship didn't start out as scrap iron, but sadly became so when it found its way to the bottom of Savo Sound. It was quite a new ship at time of loss, actually, but her history makes her almost as quirky as the five tin cans above. Her fate is particularly tragic since she had perhaps the best picture of the situation, having a newer radar set than her teammates. But perhaps because of her diminutive size the admiral in tactical command broke his flag aboard San Francisco. Quite ironically, Rear Admiral Norman Scott had gotten himself rather lost aboard San Francisco several weeks earlier in a crazed melee that turned out rather well for the Americans. At the reprise things went more poorly and Scott paid with his life. (As did the OTC, Rear Admiral Daniel Callaghan.) Not only did two different American admirals die that night, (one aboard our subject) but the five Sullivan brothers died aboard or in the water awaiting rescue after the fight. 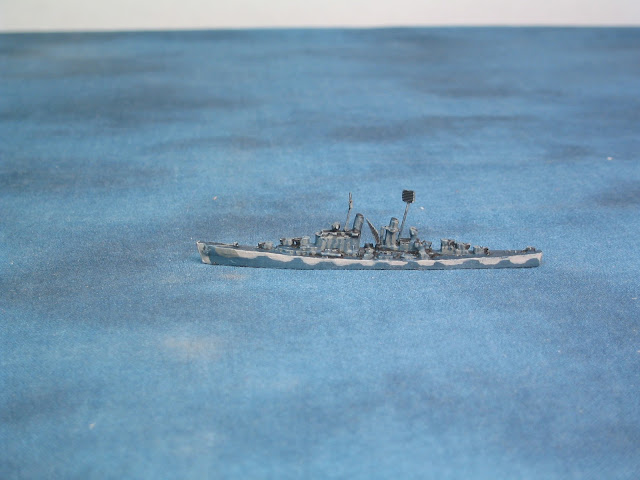 The ship is, of course, USS Juneau. I typically try to paint my ships in a mid 1942 scheme, and Juneau is no exception. (I target a date in June of 1942 as closely as possible. Not really sure why, mind you. And if you believe that . . . ) While I admit I'm happy about my choice, I might well have broken it if Juneau had ended up in these duds any later. This oddball hybrid scheme amuses me so greatly I might have chosen it had it been applied in 1943. (Which isn't possible, of course, as paint doesn't really dry well underwater.) However, the fact that this is both the paint she wore at miraculous mid-year and on the date she met her tragic fate makes it an absolutely sure thing. No other scheme would suffice. For the curious, the model is an older Superior casting of a first run Atlanta.

So here's to the men who served aboard the scrap-iron, those who lived to tell the tale and those who paid the ultimate price for what they believed in; defending their families and countries and ways of life. Here's to the scrap iron heroes. You did what needed doing.
Posted by The Composer at 10:22 PM