40,000 years in the future used to be a fairly grim place. Kind of a dirty classic steampunk. Then it got bright and all comic-booky heroic and I decided the light bothered my eyes so I left. Mind you, I never got rid of my toys, so the door was always open. To be honest, I guess I'd just pretended I'd left: threw some blankets over the windows and retreated to the basement. (To crib shamelessly from my friend Z, who lives the dark and dangerous steampunk life every day.)

While the apocalyptic destruction of the great gaming citadel is ongoing, I've decided I might as well admit I'm still here and come out and play with the bones a little. They're good bones. Bones with character.

I first met the Space Marines in a friends box set of the then ubiquitous "beakies." I hated them. Everything was exagerated. The models were crude and poorly detailed. They didn't fit together well. The plastic was some kind of harder grade of styrenesque something that didn't bond well with standard hobby glue. In short, they were plastic models from people that had no real clue how to make plastic models. But after I bonded with them for a little while . . . (Not literally people! I didn't use CA glue then.) . . . after I'd had some time to grow comfortable with the aesthetic I realized they had some character and this was an arms race I could join. After I read my friend Ben's Rogue Trader I was hooked. I could modify things. There were models that looked somewhat more elegant. I had some ideas.

So I bought my own box of beakies. When my friends bought multi-meltas and heavy bolters and all those fancy guns I, being on a budget then, hacked and slashed with the bits I had lying about and made my own special guns. For several years my beakies were well equipped but with something of an odd-lot look about them. Later, when I started to buy lead I found this unsatisfactory and most of the conversions ended up in the repaint/repair bin, from whence I dug these: 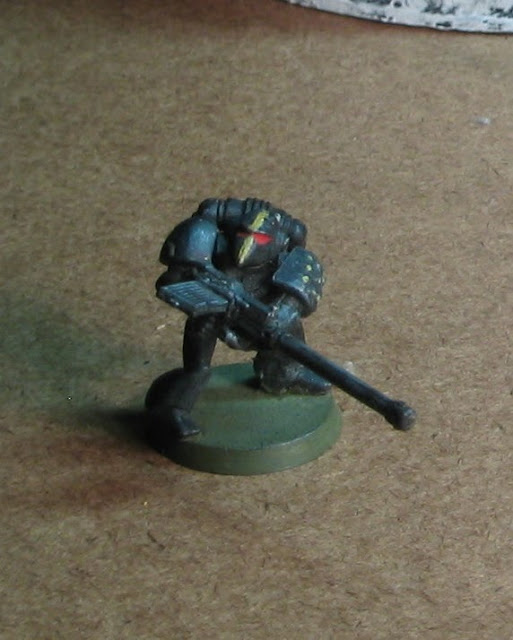 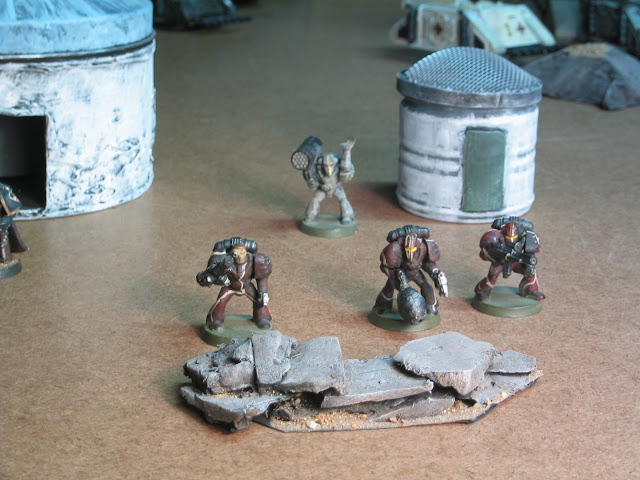 Everything from fishing weights to the drive shaft from a pickup truck model made it's way into the arsenal. There's also the grip from a motorcycle, sprue, German clips in large calibers, and folding fin aerial rockets. Or at least pods to carry them. Lots of model parts. I like styrene. It's good to have some sitting about. I always worry I'll run out of interesting parts but I truly never do. 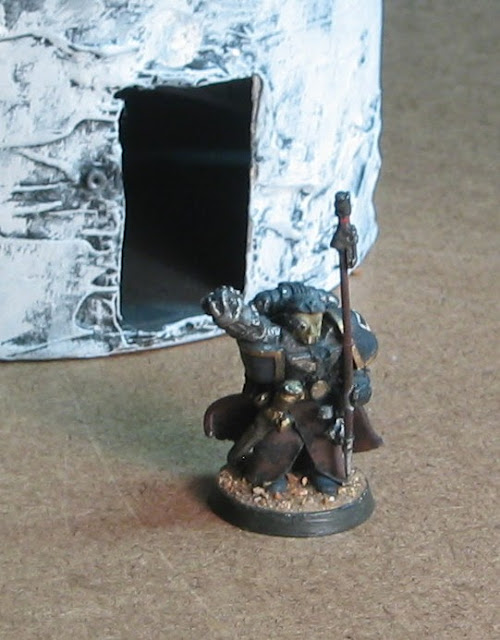 None of these are in their original paint, but they're from the first couple of years. By the time of the last one I was beginning to get just a little more bold. You might see that I sliced and diced some lead in the service of a very crude conversion. He was intended as a chapter commander in the absence of the original great wolf himself. (Which figure I owned but couldn't really toss onto a battlefield.) While this miniature wasn't particularly successful, some of the techniques I tried turned out useful later. 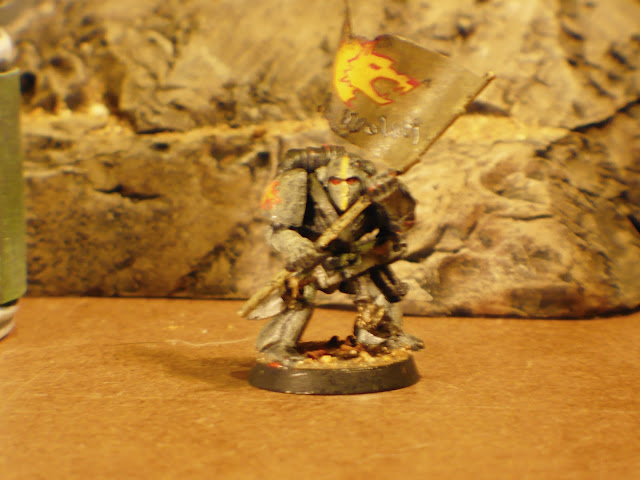 Another technique I was slow to learn was stripping. This fellow is an example of what came out of the repair bin for a repaint. It's perhaps obvious that the stripping was accomplished with a hobby knife, but in this case I almost like it. The thick paint and bad strip job kind of give him a nice battle-worn character. He's probably due up for some repairs, but this gives you the flavor of what I did. All in all, I'd say it's not too bad for an eighteen-year-old kid. The banner is the usual paint and paper, but I think the pose, the rubber band straps, and the putty wolf's tail were nice touches.

But enough of soldiers. Given that I started out with plastic airplanes maybe it's not surprising that my army was a little more armor heavy than most: 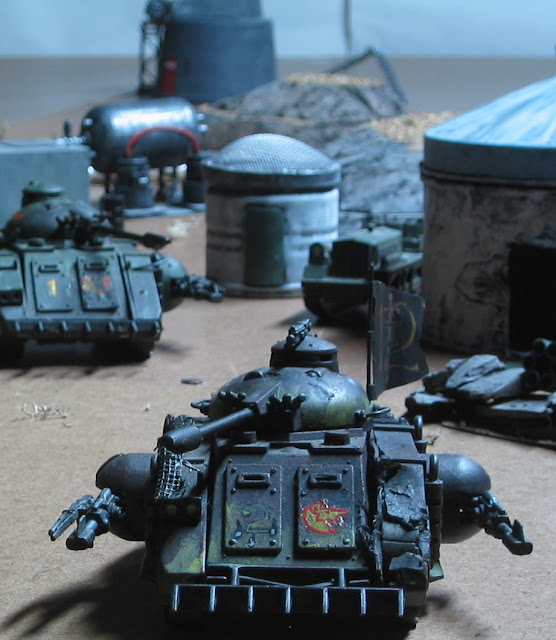 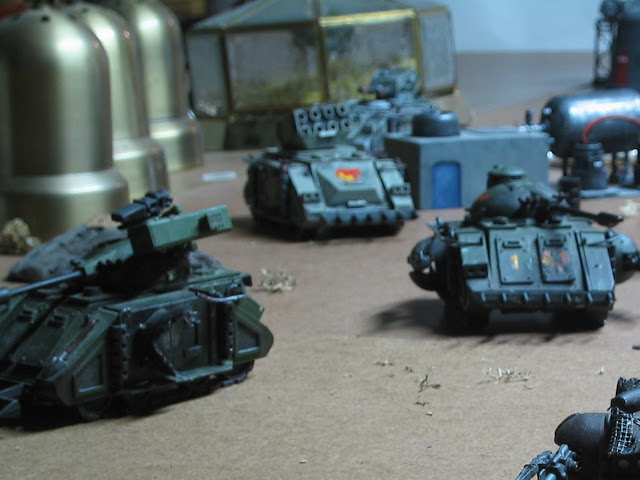 Of course, I've never met a military model that couldn't be improved by a little cutting and pasting, or even smacking about with a ball-peen hammer. The lead Predator has had the hammer technique applied to the track guard. The small piece of track is salvaged from a converted Rhino that you can see with large red crosses in a previous post. The camouflage netting is nylon screen. More hammer work and some possibly identifiable bits from more recent kits can be seen on the leftmost tank in the second picture. In the background are an old-school Whirlwind that was visible in the previous post and a Razorback that was not. (Not having been released yet and all.) The Whirlwind makes use of a conversion from an issue of White Dwarf. I cut up a large square base for the rockets (and still have baseless dreadnaughts as a result) and used some leftover bits from my Predators for the rest. The bottom was the big angle door front piece. the top was the eagle plate.

When I picked up the land raider you see below I found all this lovely empty space inside. It had a nice floor, some couches, hatches and doors you could leave unglued, but no place for a driver to sit. (And no room elsewhere in the model that couldn't be seen through that door.) 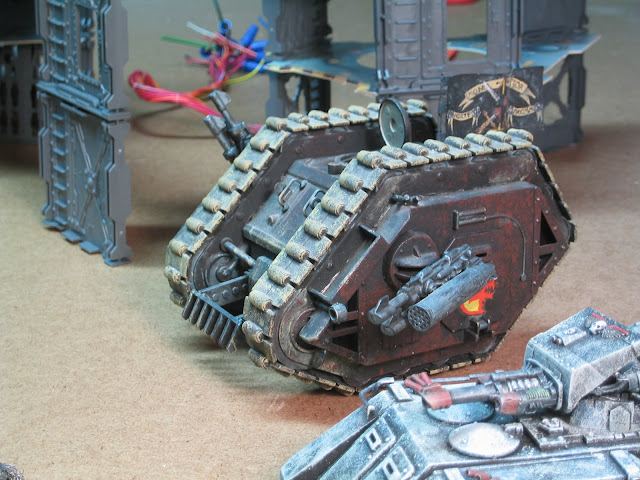 A dive into my parts bin fixed that. I've begun to forget what some of the particular bits are, but there are pieces of a visible nuclear submarine model, chairs from a German flak cannon, a wheel from a Panzer IV I think it was, an ammunition drum, a harness from a dorsal turret . . . parts. Spare parts in assorted scales repurposed to become consoles and controls. I'm still relatively pleased with the result twenty years later. 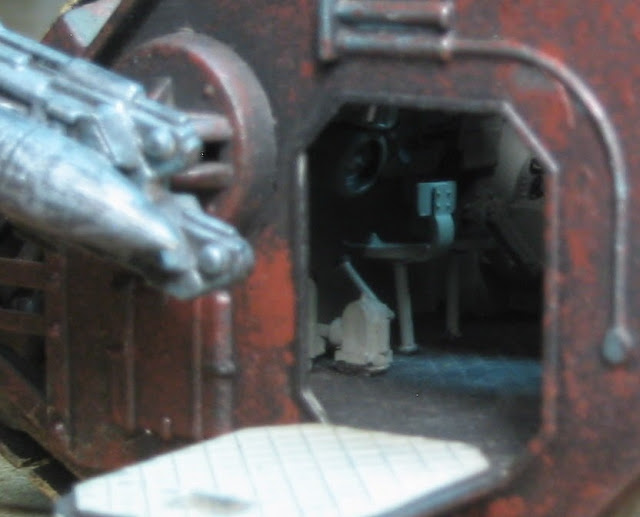 And if you want some really intense conversion, try this on for size . . . 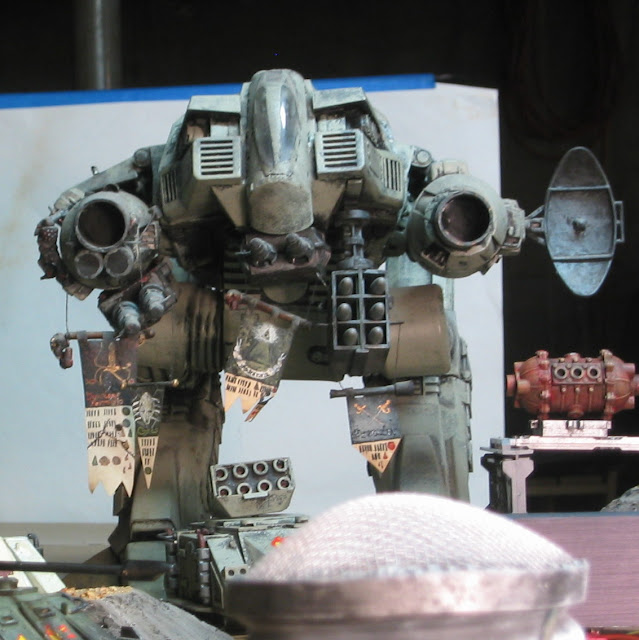 He's beginning to show his age, Eddie is, but he's still a sight on a battlefield. He uses guns from G.I. Joe toys, electrical conduit, a cockpit from an A-10, sheet styrene, wooden dowel, paintbrush handles, a barrel from a predator, German ammo lockers, British drop tanks, the bones of two or three beakies, the flight console from a B-17 and I believe the engineer's console from a B-29 . . . and lord only knows what else. Fun stuff. I've actually used him in a battle once. Try this one on: he lost. (My friend Ben had two. Ed was a little overmatched. But I gave as good as I got.) Oh yes: if it wasn't obvious Ed started life as a vinyl ED-209 model. I have a toy star wars walker sitting about for use one day in the future. Maybe.

In Part II I talk a little about my experiments with lead and wonder where those extra brain-cells went.